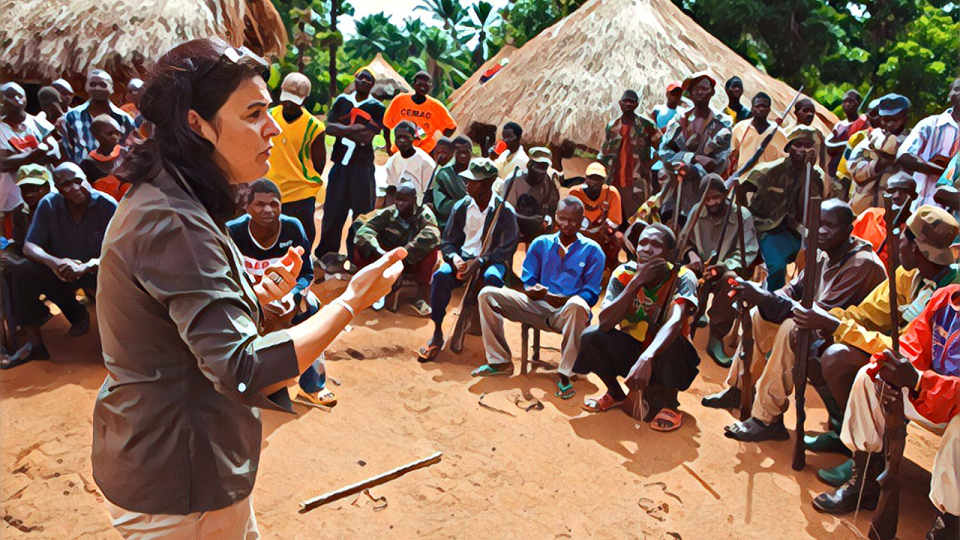 Translation has often been regarded as an act of ‘betrayal’, for the impossibility of transferring the exact same messages between different languages. Yet, if seen for what it really is – the road to cross-cultural understanding and communication – translation can be valued for bridging the gaps between human beings. Translation as part of humanitarian response plays a crucial role in identifying and responding to the needs of affected populations. A ‘faithful’ translator to the humanitarian mission contributes to acceptance and humanitarian access.

In this post, Rasha Mahmoud Abdel Fattah, Head of Arabic Translation at the ICRC Regional Communication Center in Cairo, challenges the claims of betrayal and infidelity of translators and examines the process of translating into Arabic in a conflict-stricken region that poses linguistic, communicative, and cultural challenges.

The historic rivalry between Italy and France has not been confined to battlefields. Beyond the invasions and military confrontations, the cultural rivalry between the two countries dates back to before the Renaissance. Philosophers, writers, artists, and scholars on both sides were competing to be at the forefront of the European ‘rebirth’. Dante Alighieri’s Divine Comedy influenced the Renaissance and became universally considered one of world literature’s greatest poems. When French translators translated Dante into their own language, the Italians were infuriated, claiming that French translations ‘betrayed’ the original text, failing to convey its lexical and phonological beauty.

Such rivalry was behind the famous Italian proverb ‘traduttore, traditore’ that describes the translator as a ‘traitor’; a ‘betrayer’. As a humanitarian translator, this is only one among the many charges I have faced throughout my professional career. Translators are sometimes seen as ‘poor writers’ or ‘re-writers’, ‘evil transgressors’, or in most cases ‘literal transferrers’ of the original text/language that inevitably gains or loses nuances and shades in their target rendering.

Would a rose by any other name smell as sweet?

Translation is indeed an act of compromise; a ‘betrayal’ in a sense. Even the most well-trained and experienced translators cannot escape the fact that they bring their own culture, knowledge, experience and even their own character to the translation process. But who/what do translators betray? The text? The author? The reader? Or all three of them? Theoretically, no translation can fully convey the full depth of meaning, emotion, and context as the original work intended. Yet, the challenging task of translation is to make the reader of the target language (TL) able to ‘read’ the target text (TT) in the same depth of meaning, emotion, and context as a reader of the original text would.

Perhaps the most obvious explanation of this proverb is that the translator betrays the author of the original text. This inevitably happens when the translator works between languages that belong to different language families (i.e. from Arabic, which belongs to the Semitic family of languages, to English, a Germanic language or French, which is a Romance language). These languages are not only different in their semantic and syntactic structures, but also in their cultural and semiotic systems. If the translator decides to translate literally, assuming that this is being faithful to the author, this often results in a lack of fluency in the TL. On the other hand, if the translator opts for a rather communicative or semantic translation, in which he/she transfers the author’s message rather than the exact words, he/she risks being labelled a traitor to the author.

Apart from the dichotomy of ‘betrayal’ and ‘fidelity’, translation needs to be seen as the road to cross-cultural understanding and communication. By translating the Italian word ‘bravo!’ (meaning ‘brave’) into the English ‘well-done!’ or the Arabic ‘أحسنت’ (‘ạảḥ̊sanat̊’ which means ‘you did well’), the translator is not actually betraying anyone, but rather flowing smoothly between different syntactic structures in different languages, with the aim of ‘naturalizing’ the message in the source text (ST) to its target audience. In this sense, fidelity can be generally identified with faithfulness to the meaning rather than the words of the ST author.

The high stakes of humanitarian translation

Fidelity to meaning is particularly crucial when it comes to translation in humanitarian response. Communication between humanitarian workers and affected populations is key to ensuring identification of needs and effectively responding to them. Moreover, major awareness campaigns on health issues, natural hazard-induced disasters, legal and human rights in conflict or non-conflict contexts need to be communicated in local languages and adapted to target cultures.

Here, humanitarian translators play the crucial role of bridging cultural gaps, or ‘domestication’ as coined by the famous American translation theorist Lawrence Venuti. ‘Domestication’ refers to the process of replacing the source culture and culturally-bound linguistic elements with the target culture and its linguistic elements, hence aims at making the translated text closer to the TL culture where ‘the foreign text is imprinted with values specific to the target-language culture’[1].

But why is ‘domestication’ a preferred translation strategy in humanitarian response? Affected populations experience many vulnerabilities on multiple levels. For humanitarian response to achieve its objectives, it needs to be ‘accepted’ by target populations. Awareness of and sensitivity to vulnerabilities and cultural boundaries are the way to acceptance, trust and hence, access. In this respect, translators – as communicators – bridge the gaps and ensure the interpretation of meaning considers and respects vulnerabilities and sensitivities.

Translating for the International Committee of the Red Cross (ICRC) for almost a decade now, I have seen these strategies at work and have developed my role beyond literal transfer of texts from a language to another. Working in a region that has been inflicted with conflicts, made my work – and the work of other translators in NAME (North Africa and the Middle East) – a daily challenge, sometimes struggling with simple words and phrases that may carry huge risks to the perception and acceptance of the ICRC.

Moreover, translating into Arabic – a language that has been constantly rated as one of the most difficult languages to learn and localize – adds more challenges. Translating from English to Arabic, thus, involves numerous dynamics and requires endless decisions on the side of the translator. Arabic is a Semitic language, with a distinguishing feature that it is a hugely derivational language, with what is estimated to exceed 12 million words. When you compare that to English, which has only about one million words, this gives you an idea of the abundance of vocabulary choices, but also indicates how challenging it is for translators to make the right choice of the intended shade of meaning.

A simple English word like ‘said’ in a news release or a statement or even a web story can be translated into: ‘قَال’, ‘تَكَلّم’, ‘اِدَّعَى’, ‘أَلْقَى’, ‘تَحَدّث’, ‘تَفَوّه بـ’, ‘تَلَا’, ‘لَفَظ’, ‘نَطَق’, ‘نَبّس بـ’ (‘qāla’,‘takalãma’,‘ạidãʿay̱’,‘ạảl̊qay̱’,‘taḥadãtẖa’,‘tafawũhuⁿ b’,‘talā’,‘lafaẓa’,‘naṭaqa’,‘nabusũ b’) etc. To translate ‘condemn’ in a news release on targeting of civilians, the translator needs to be well-informed of relevant communication policies and strategies before taking the decision whether to choose ‘يَشْجُب’, ‘يُدين’, ‘يسْتَنْكِر’ or ‘يُنَدد بـ’ (‘yasẖ̊jubu’, ‘yudīnu’, ‘yas̊tan̊kiru’or ‘yunadĩdu b’). The shades of meanings these near-synonyms imply in Arabic identify the position of the organization communicating the news. One lexical choice can put neutrality at stake and qualify the statement as biased towards or against a specific party.

I recall how on 8 October 2016, following the Sanaa funeral airstrike that took place on the afternoon of that day, the translation team in Cairo received an urgent news release in English to be translated into Arabic and communicated on the same day. While working on the document with the team, we were challenged by certain lexical choices made in English and how these will be transferred to Arabic, while remaining in line with the ICRC editorial policy. Acknowledging the pressure of time and the urgency of the situation, translators were well aware of the impact of their linguistic decisions on the perception of the ICRC, its role and mandate, and the necessity of maintaining access through remaining neutral and impartial. Not only did this awareness inform the translators’ decisions about the Arabic version of the news release, it also gave way – through exchanges with ICRC spokespersons and PR officers – to editing the English ST accordingly before it was released.

Arabic poses another challenge with dialects; each region of the Middle East and North Africa has developed its own set of dialects to the extent that any two countries can easily become lost in translation, both in written and spoken communication. With this in mind, the translator identifies his/her target audience and which dialect to use as per the context he is communicating on/to, then he/she makes decisions on local subtleties and vocabulary. While the word ‘jerrycan’ – an item that is frequently used in communication on activities and humanitarian assistance and response – can be translated into Arabic targeting Yemeni audience as ‘دبة ماء’ (‘dubãẗa māʾiⁿ’), this translation choice won’t be made outside the Yemen context. In global or regional communication, the translator would rather opt for a choice that is comprehensible to almost all Arabic speaking audience in the region, translating the word ‘jerrycan’ into ‘صفيحة مياه’ (‘ṣafīḥaẗu mīāhi’).

Another challenge has to do with institutional approaches to certain sensitive issues, which requires critical decisions on the side of the translator. Displacement, a major area of humanitarian work, is one example of how different humanitarian organizations ‘perceive’ certain notions and concepts. While UN organs, particularly United Nations High Commissioner for Refugees (UNHCR), translate ‘IDPs’ (Internally displaced persons) as ‘المشردين داخليًا’ (‘ạl̊musẖarĩdīna dākẖilīaⁿ̃ạ’), the ICRC chooses to translate ‘displaced’ as ‘النازحين’ (‘ạlnãạziḥīna’), granting agency to IDPs by opting for a structure in Arabic that qualifies them as ‘doers’ by using ‘اسم الفاعل’ (‘ạis̊ma ạl̊fāʿili’ – the participle as a grammatical subject) instead of using ‘اسم المفعول’ (‘ạis̊ma ạl̊maf̊ʿūli’ – the participle as a grammatical object). ‘Mental health’ translated as ‘الصحة العقلية’ (‘ạlṣĩḥãẗa ạl̊ʿaq̊līãẗa’) is rather translated in the ICRC as ‘الصحة النفسية’ (‘ạlṣĩḥãẗi ạlnãf̊sīãẗi’) to avoid the negative connotation and stigmatization accompanying mental health issues in some cultures. Similarly, an ICRC translator would always translate ‘detainee’ as ‘محتجز’ (‘muḥ̊tajiza’) except for very specific contexts and target audience where he/she would rather translate it as ‘معتقل’ (‘muʿ̊taqala’). These conscious decisions made by humanitarian translators are no signs of their infidelity; they are – on the contrary – part of their commitment to the organizational mission that holds high the principles of humanity and universality.

Translating as part of humanitarian response is essentially an act of communication and cultural mediation. Aiming to bridge gaps and build trust, translators are allies to humanitarian actors responding to the needs of affected populations. Whether faithful or not to the text/author/reader, the humanitarian translator remains faithful to his mission; ensuring effective communication that alleviates suffering and saves lives. Based on my own personal and professional experience, I have no doubt – in today’s context – that Italians have had second thoughts about their proverb ‘Traduttore, traditore’!