Pericles' famous funeral oration, delivered at the end of the first year of the Peloponnesian War (431-404 BC), as pictured on a 1955 Greek banknote.

With increasing pressures on the humanitarian environment – shrinking space and shrinking funds first among them – the need to influence authorities and donors has never been greater. But how to do it to best effect?

In this post, ICRC Diplomatic Adviser Nick Hawton takes a personal look at the lessons learned from the fields of communication and diplomacy and how to maximize the chances of influencing the decision-makers and power brokers of today.

ICRC Humanitarian Law & Policy Blog · The art of influencing: how to maximize impact in a complex, interconnected world

In a previous place, in a previous life, I was surrounded by a hooded and masked mob about twenty to thirty strong, slowly closing in on me and clearly offering me the opportunity of curtailed life expectancy. Behind them, flames rose into the night sky from the buildings they had just torched. The pungent smell of burning oil filled my nostrils. The authorities were nowhere to be seen. From the looks on the faces of the maddened crowd there was a clear desire to graduate from buildings to people, and I was first in line. It was one of those moments when you feel that searing sense of the now, the pure unpredictability of the moment. Paradoxically, you feel alive.

All of a sudden, a colleague of mine strode up from nowhere, pushed his way through the crowd, spoke clearly and assertively to the ringleader of the mob, grabbed me by the shoulder, and pulled me through the crowd and out into the street. Two minutes later we were in his car driving away from the turmoil behind us in this northern European town. I thanked him profusely, for risking himself to help me. I asked how he had managed to do it, how had he managed to persuade the ringleader to let him through, to free me. In a casual, matter-of-fact way, he said: ‘Oh, I’ve been around. Seen a few things. You just have to act confident’.

The ability to persuade or influence others is a complex process, involving a lot more than just confidence. It’s a process we’re all constantly engaged in on a personal or professional level, tapping into everything from human psychology and neuroscience to communication skills and, well, pure chance. Books have been written, lectures given, workshops delivered, committees set up: all trying to understand how to influence better. We even have professional ‘influencers’ ensconced on social media platforms. Robert Cialdini’s book ‘Influence’ has become a contemporary reference, particularly for the corporate world. But one might just as well go to the twelfth century Persian poet, Attar of Nishapur, to learn the techniques of influencing and persuasion.

For the purposes of this post, I’ll use ‘influence’ and ‘persuade’ interchangeably. But there are subtle differences: persuading is always explicit, influencing not necessarily so. Persuading is generally more specific and more targeted, whereas influencing can be broader. But the overlap between the terms is clear.

The equation of influence

My own authority to speak on these matters is not borne out of academic research or a scientific background, but rather derived from raw experience: a career that has taken me from journalism, to diplomacy, to humanitarian work. The professional need to influence or, more precisely, communicate to influence, has been a constant requirement: to persuade the war criminal to give an interview, to encourage a government minister to sign an agreement, to convince authorities to grant access to a prison. In the humanitarian world, the stakes can be particularly high, where lives, many lives, can literally depend on the ability to influence.

It strikes me there are certain rules of thumb, certain practices, certain principles, that maximize – and I emphasize the word ‘maximize’ as there are no guarantees in the process of influencing – your chances of success.

Between the desert and the deep blue sea, our resplendent hotel stood tall and proud. The city and the country had been ripped apart by conflict. It was the people, as usual, who were on the frontline of the suffering. The hotel was the gathering point of politicians, soldiers, spies, diplomats and business people: the people who held the key to the future and a reduction in the suffering. My job was to try to engage with them, to understand them, to understand their motivations in order to fulfil my job in the interests of the people. But my default position was always to listen: to be on ‘receive’, not ‘transmit’. To understand what was happening. By listening you not only learn, you also respect your interlocutor. And respect is the first step on the ladder to influencing.

Lying in my hotel bath one night (baths are one of safest places to be when shells and bullets are flying around) with the noise of fighting outside, with a helmet on and fifty euro notes stuffed down my socks ready for a quick escape, influencing was not the first thing on my mind. A few weeks later the hotel was ripped apart by a deadly bomb explosion. But we’d left by then – we’d seen it coming. Know, very well, who or what you are trying to influence and the environment in which you are trying to influence.

Once you have listened to your interlocutor, and the environment that prevails, the second principle of influencing should be utilized: simplicity of communication. In an increasingly complex world, our cognitive processes are constantly threatened with overload. Our capacity to process information and differentiate between the important and the irrelevant is increasingly impaired. The need to simplify becomes ever more important, even critical.

Of course, there are inherent dangers in oversimplifying complex situations. There is no better teacher than twentieth century history. And now, with the advent of mass and fast communications, misinformation and disinformation have been spawned at an unprecedented rate. There is thus a moral responsibility on all of us to be fair and accurate when we simplify. But simplify we must, if we want to persuade and influence.

When you’re engaging with a State’s permanent mission in Geneva and your aim is to persuade them to part with millions of Swiss francs, don’t waffle. Don’t over complicate. Be clear. If you’re writing a speech highlighting the humanitarian tragedy that is Yemen today, don’t mince your words. Misunderstanding is the enemy of influencing. Speak your truth clearly and accurately. A clear message and a coherent argument. Keep it simple. This will enhance your ability to influence.

The third element of the influencing equation, after listening and simplicity, is that long-lost friend, honesty, crucial in the humanitarian environment. In such high stakes’ environments there is often a heightened awareness of what matters and what doesn’t, of what is true and what is not.

If a local police chief were fiddling with his pistol trigger, sweating nervously and looking suspiciously at you as you ask to access the mass grave behind him, it would not be recommended to tell him bare-faced lies. The consequences of being found out would not be worth contemplating. If you’re trying to persuade a local community leader whose relatives lie in the same mass grave to engage with you, stick to the truth.

When you want to influence and persuade, the deployment of truth will always be best. It really should go without saying that honesty is (nearly) always the best policy, especially in a world where we are experiencing a period where the sanctity of honesty has been questioned even at the highest levels of power. (That is not to say that this is a new phenomena but rather that dishonesty has been more obvious and amplified in the era of mass and fast communications). Honesty also has the hugely beneficial effect of helping to create trust – that essential ingredient in the process of influencing.

And so we have our equation for influencing: listening plus simplicity plus honesty equals influence.

The power of storytelling

There is something more to consider when trying to maximize influence: couch your effort within the parameters of a narrative, of a story.

Our brains are hard-wired to appreciate stories. From time immemorial stories have formed the basis of human communication. They give structure to our experience. They blend entertainment with education. What is more captivating than a good story? Why do advertisers focus so much in placing their products within the context of a story? Why do we read bedtime stories to children? Because they work.

In the context of the discussion on influencing, we need whenever possible to use the format of structure (or ‘narrative’) to enhance our message delivery. But not just any story. Like any good speech, the story must be targeted for the audience in question. The writer of the story needs to know and understand the audience (the ‘listening’ component of our equation). The best stories are easy to understand (the ‘simplicity’). The most believable stories are the ones with the ring of truth about them (the ‘honesty’).

We can define stories in many ways, but they usually involve a character or characters experiencing a set of events or incidents. The sequence of events can be true or fictitious, but they are interconnected and often involve a challenge or problem and the attempt to resolve it. In the humanitarian field, we know the power of telling the story of one individual rather than the story of tens of thousands. As humans, we find it easier to connect and identify with the one rather than the many.

What we leave behind

Our ability to communicate to influence can be practiced and workshopped. There are ways and means of telling stories – or narratives – that are more effective than others. This can be learnt. But the fundamental principles of how to influence, in my experience, revolve around listening, simplicity and basic honesty. Get these right and you will go a long way in establishing the trust and the ability to influence that you seek.

Of course, there then remains the final conundrum of assessing, or measuring, to what extent the attempts to influence were successful or not. What was the key event or action that finally influenced X to do Y? This will always be difficult to assess given the complex nature of cause and effect. Perhaps we will never know the precise reasons why something happened the way it did. Intelligent guess work is probably our best friend in this. Perhaps the final word should go to the Greek general and politician, Pericles, who summed up in the following, and perhaps profound, way what any of us humans are able to influence:

“What you leave behind is not what is engraved on stone monuments, but what is woven into the lives of others.” 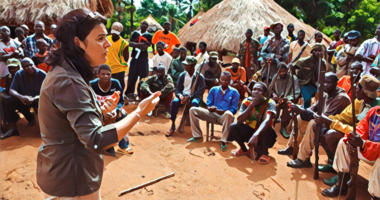