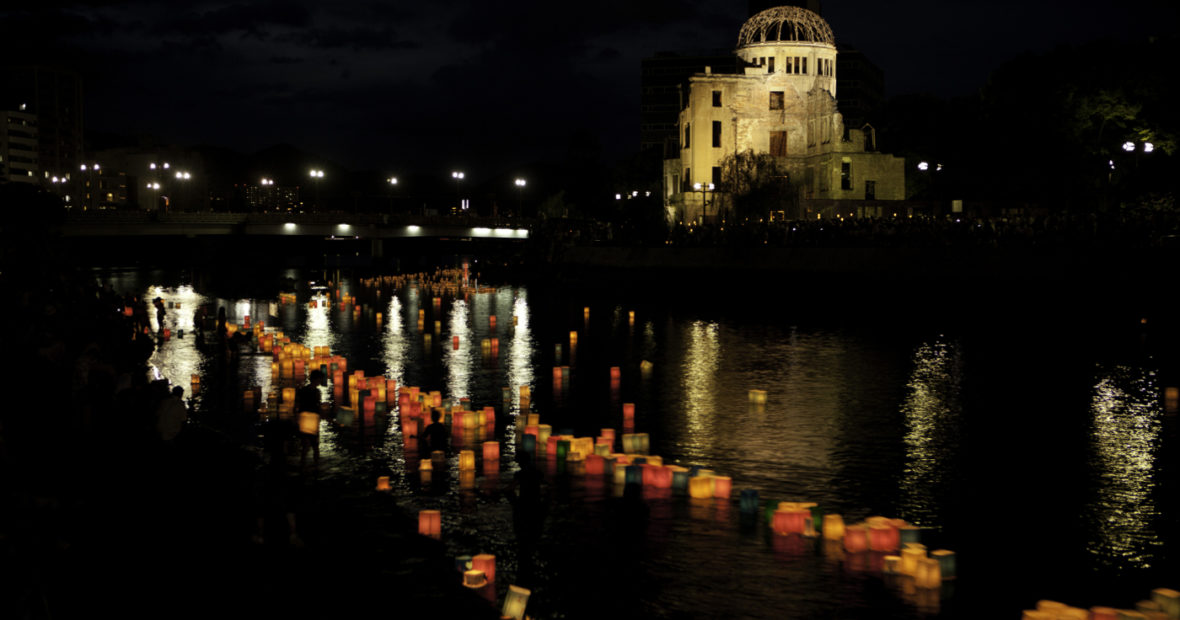 Approximately 340,000 people died immediately and within the five years following the atomic bombs being dropped on Hiroshima and Nagasaki on 6 and 9 August 1945, respectively. From the 1945 to today, the International Red Cross and Red Crescent Movement has been responding to the needs of victims and has been consistent in its call to abolish nuclear weapons. In view of recent initiatives to reframe the issue of nuclear weapons in terms of the humanitarian consequences of their use, the International Review of the Red Cross has published an issue on The human cost of nuclear weapons.

After reaching Hiroshima on 29 August 1945, the ICRC’s Fritz Bilfinger telegrammed a chilling account to the Tokyo office: “city wiped out, eighty percent all hospitals destroyed or seriously damaged; inspected two emergency hospitals, conditions beyond description full stop”. The Japanese Red Cross, who began assisting victims the day after the blast, continues to this day to treat several thousand people each year for cancers and illnesses attributable to the 1945 atomic bombings. The survivors or hibakusha, as they are known in Japan, are among the strongest voices calling our attention to the severity and enormous scale of the suffering caused by nuclear weapons. 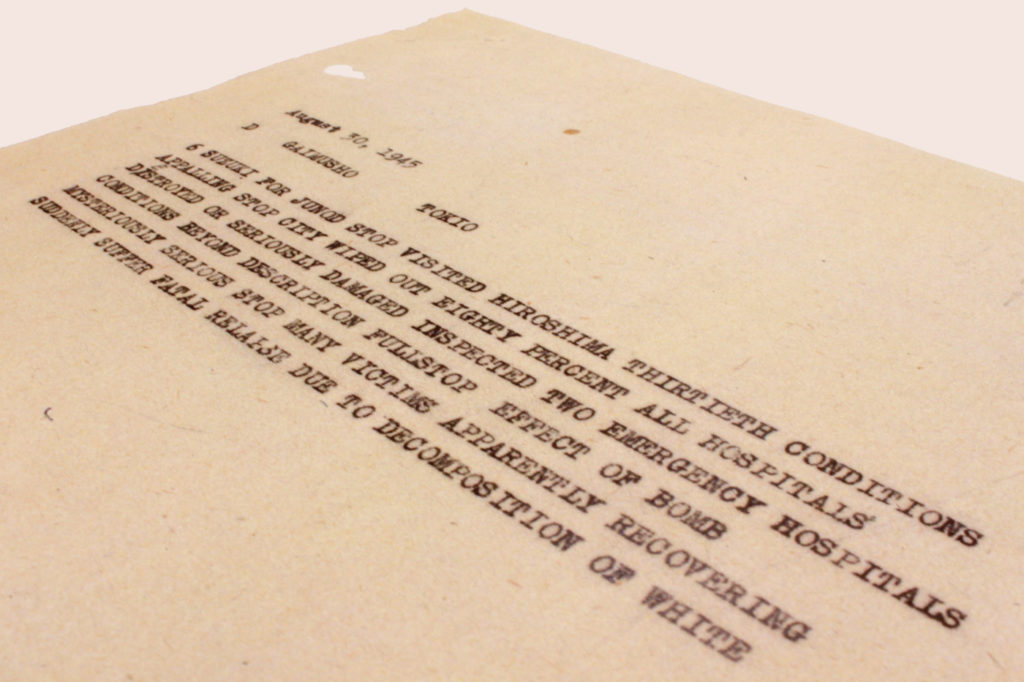 The ICRC took a clear stance in favour of the abolition of nuclear weapons soon after such weapons were used for the first time, and this position remains consistent across the Red Cross and Red Crescent Movement (the Movement) today: in President Peter Maurer’s words, “the ICRC and the Movement emphasize the rationale for action on nuclear weapons and lend force to the efforts to achieve a ban on their use and their total elimination.”

In spite of the international community’s difficulty in making real progress towards the prohibition and elimination of nuclear weapons, the Movement has a deep responsibility to “rise in defence of humanity”. It is compelled to use its voice to draw attention to the unacceptable humanitarian consequences of the use of nuclear weapons, highlight the implications of such weapons under international humanitarian law (IHL) and urge governments to pursue the prohibition and elimination of these weapons as quickly as possible.

Due to the fact that there has not been a nuclear attack since Nagasaki, it is easy to underestimate the risk of intentional or accidental nuclear detonation that humanity as a whole faces daily. After their first use in 1945, the world was quite aware of the catastrophic effects of nuclear weapons. The danger of nuclear attacks was ever-present for more than four decades during the Cold War. Over time, however, the sense of urgency amongst the general public has faded.

While the threat no longer seems as present, paradoxically we now know more than ever before about the effects of even limited nuclear war on the environment and health of human beings, and that, as was highlighted by the International Court of Justice (ICJ) in its 1996 Advisory Opinion on the Legality of the Threat or Use of Nuclear Weapons, “[t]he destructive power of nuclear weapons cannot be contained in either space or time”.

Even though an all-out nuclear war is far from the public consciousness in the post-Cold War world, as long as nuclear weapons exist there is a danger that they will be used or accidentally detonated. Furthermore, we have already seen that nuclear testing has had terrible consequences on the lives of populations living nearby and some of the military personnel involved. These include the inhabitants of testing areas, often ethnic minorities or insular populations. Many testing areas have also suffered serious environmental damage. It is also important to note that the risk of accidental nuclear detonation remains high. Lastly, there is also a danger that nuclear weapons could fall into the hands of non-State actors.

Despite this, nuclear weapons remain a pillar in the security policies of a number of States, and for some, possessing them has become a perverse status symbol. Today, nearly 16,000 nuclear weapons are stored at sites located in fourteen countries. Approximately 1,800 nuclear warheads are kept on high alert status in the United States and Russia, ready to be fired within minutes.

Nuclear weapons are not above the law

In its comments following the ICJ’s Advisory Opinion in 1996, the ICRC concluded that it is “difficult to envisage how a use of nuclear weapons could be compatible with the rules of international humanitarian law.” In this blog, ICRC senior legal adviser Louis Maresca argues that “[e]verything that we know about nuclear weapons and the new information and analysis that has come to light over the past 20 years has only strengthened that conclusion.”

If IHL does not go so far as to explicitly prohibit nuclear weapons, this does not mean that the law is silent: IHL contains a range of general rules governing the conduct of hostilities that are relevant to assessing the legality of nuclear weapons, such as the rules on distinction and proportionality, the prohibition on indiscriminate attacks, the prohibition on the use of weapons of a nature to cause superfluous injury or unnecessary suffering, and the rules protecting the natural environment. At the core of these rules lies the general principle that individual civilians and the wider civilian population enjoy a general protection from the dangers arising from military operations.

In its 1996 Advisory Opinion, the ICJ decided that the use of nuclear weapons would “generally be contrary to the rules of international law applicable in armed conflict, and in particular the principles and rules of humanitarian law”. Despite this, it did not take a decision on whether such weapons would be compatible with the law in “an extreme circumstance of self-defence in which the very survival of a State would be at stake”, a part of the decision that has been widely criticized.

At that time, the Review produced an issue addressing the topic of nuclear weapons through the lens of the Nuclear Weapons Advisory Opinion. Since then, the Review has continued to publish regularly on the subject. Today, given the opportunity to capitalize on the increased focus on the humanitarian consequences of the use of nuclear weapons, it seems opportune to revisit the topic more fully in this thematic issue.

Reframing the issue: The humanitarian track

Recently, the nuclear weapons discourse has begun to shift away from deterrence. As a witness to the devastation of 1945, the role of the Movement is not to assess the political motivations behind the possession of certain weapons but to bring to the fore their humanitarian consequences and their implications under IHL principles and rules.

In recent years, two notable ICRC initiatives have contributed to a renewed debate on nuclear weapons through the lens of their human cost. First, assessments undertaken by the ICRC in 2007 and 2009 showed clearly that there is a lack of capacity at the national and international levels to effectively assist the victims of a nuclear detonation. The ICRC has since created a response framework to chemical, biological, radiological and nuclear events. Second, ICRC President Jakob Kellenberger asserted in a seminal statement in 2010 that the “currency of this debate must ultimately be about human beings, about the fundamental rules of international humanitarian law, and about the collective future of humanity.” Within the Movement, this was followed by a resolution reiterating its historic positions regarding nuclear weapons and encouraging States to work towards their elimination, together with a four-year action plan to that end.

This coming August – a month that marks the 71st year since the US atomic bombing of Hiroshima and Nagasaki – the work of the international community continues with Part 3 of the 2016 Conference on Disarmament and a session of the Open-ended Working Group on nuclear disarmament, among others.

Humanity may not be able to avoid accidental or intentional nuclear detonation forever. The fact that such weapons have not been used in more than seventy years is no guarantee that they will not be used again. The longer these weapons exist, and as they are developed by more States and possibly even acquired by non-State actors, the likelihood of another nuclear detonation increases. In light of what we know about the terrible consequences of the use of nuclear weapons and the challenges of adequate humanitarian response in the event of a nuclear catastrophe, it is now more clear than ever that the international community must imperatively find a way to achieve total nuclear disarmament, through a ban treaty or otherwise. As long as nuclear weapons exist, there remains a risk that they might be detonated, and this must never happen again.

Vincent Bernard is the editor-in-chief of the International Review of the Red Cross.

Ellen Policinski is the managing editor of the journal.