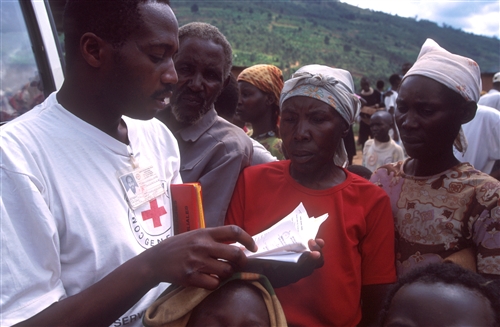 “Ten thousand people, it’s nothing in a conflict that killed almost a million in less than three months, it’s just a millimeter of humanity out of kilometers of horror” [1]

Philippe Gaillard in 1994, about the people ICRC could save in Rwanda

On 6 April 1994, following years of political instability periodically marked by political assassinations and bouts of murderous violence, Rwandan President Habyarimana was assassinated when his plane was shot down above Kigali Airport. In the chaos and violence that followed, the ICRC – which had been present in the country since the beginning of the violence in 1964 – faced an enormous challenge: that of adapting its humanitarian activities to an extremely volatile and unpredictable situation. In the wake of the systematic and organized waves of massacres perpetrated against civilians of the Tutsi ethnic minority as well as moderate Hutus, the number of people in need of ICRC assistance grew rapidly, thwarting almost all contingency plans. In Rwanda, the violence of the genocide caused millions of people to flee their hometowns, or even their country, for their safety. Credible sources of information (United Nations, Government of Rwanda) indicate that one million people were killed during the genocide against the Tutsi people. As embassies, NGOs and UN agencies left the country, the International Committee of the Red Cross (ICRC), along with Doctors Without Borders, made the decision to stay in Rwanda.

From the outset of the genocide, the ICRC set up emergency medical and surgical care for survivors. After the conflict intensified following the Rwandan Patriotic Front (RPF)’s military offensive southwards on 8 April, population displacement became – again – a core focus of ICRC activities in Rwanda. To facilitate operations, several offices were set up around the country in addition to the existing delegations. Mindful of the extremely volatile situation, ICRC headquarters in Geneva mobilized quickly and additional staff from National Red Cross and Red Crescent Societies came to help with the relief effort throughout the country.

Conceived as an entry point to the ICRC’s Library and Audiovisual archives’ rich collections, this page aims to provide an overview as comprehensive as possible of the public[2] documentary resources available on the activities of the ICRC in Rwanda. [3] 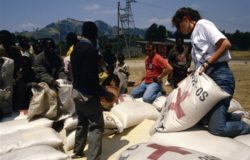 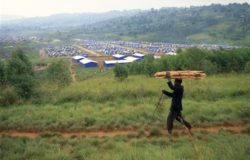 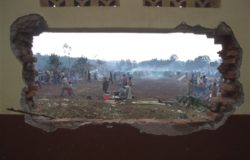 After a brief review of the context, these public statements and news releases make for a thorough overview of ICRC activities in Rwanda from 1993 to November 1995. The compilation includes the following press release (number 16/94) published on April 14 1994:

Early this afternoon in Kigali armed militiamen shot to death, in the presence of members of the armed forces, six wounded people who were being taken by Rwandese Red Cross volunteers to a field hospital set up yesterday by the International Committee of the Red Cross (ICRC). This outrageous act has compelled the ICRC and the Rwandese Red Cross to suspend the collection of casualties in the capital, where the most elementary rules of humanity are being flouted. The ICRC strongly appeals to all combatants, in particular the armed militia and their leaders, to put a stop to the carnage both in Kigali and in the provinces affected by the violence, and to allow the Red Cross to assist the wounded without discrimination

In this unusually strongly worded press release, the ICRC publicly denounced the gross violations of IHL happening in Rwanda. The blatant disrespect for the Red Cross emblem put ICRC and Rwandan Red Cross workers, who relied on its protection to do their jobs and save lives, at great risk. Upon hearing about the summary execution of those six wounded, the ICRC’s headquarters in Geneva decided – with approval from Philippe Gaillard, then head of ICRC delegation in Kigali – to make the matter public by publishing a short press release. On the following day, outrage spread around the globe as various news outlets such as the BBC and Reuters shared the story. According to Philippe Gaillard’s testimony, the Radio Television Libre des Milles Collines – a Rwandan radio station that played a significant role in inciting the genocide – subsequently declared that Red Cross ambulances would be respected.

All ICRC news releases are available for consultation online. 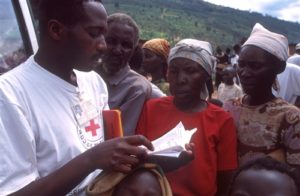 As a general report on the activities of the International Committee of the Red Cross, this volume describes ICRC activities in Rwanda at the time of the genocide, extending to the rest of the year. Structured by region as well as type of activities (tracing, medical, water and sanitation, etc.), the report provides a succinct yet comprehensive review of ICRC action throughout the country.

This special brochure was published in September 1994 and translated into English, French, German and Swahili. It opens with an overview of the ICRC’s three main aims in Rwanda at the time of the genocide: urging an end to the massacres, keeping survivors alive, and providing assistance to the refugee camps. 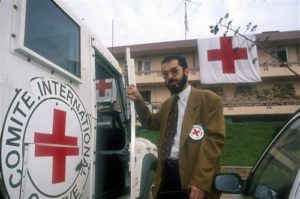 Written in French, this is the testimony of Philippe Gaillard, head of the ICRC delegation in Kigali in 1993 and 1994. The text reflects his speech at the Rwanda 1994 : La vraie vie est absente (Arthur Rimbaud) conference hosted by the International Red Cross and Red Crescent Museum in Geneva on 18 October 1994. An English version of Philippe Gaillard’s testimony was also published in Another day in paradise, a volume compiling the testimonies of humanitarian workers in various contexts.

The Harvest: the ghosts of Rwanda

Filmed in the Valais region of Switzerland where Philippe Gaillard now works in a vineyard, The Harvest : the ghosts of Rwanda offers the personal testimony of the former ICRC head of delegation in Kigali. One of the few foreigners having witnessed the genocide in Rwanda – most NGOs and international agencies had left the country by mid-April – Philippe Gaillard recounts his experience. Right at the start, this disclaimer: this movie is not about the genocide in Rwanda. And it is not. It is a moving, modest, held-back account of a man’s experience in a context of extreme violence such as most people will never encounter. 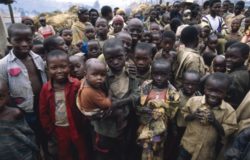 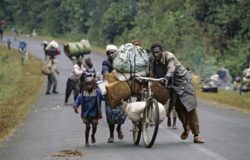 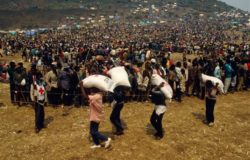 When children remember: a history of the Tutsi genocide through the eyes of children (1994 – 2006)

Ijoro ribara uwariraye: “Only the one who passed through the night can tell its story.”[4] This article for the International Review of the Red Cross opens with a Rwandan proverb of particular significance since the genocide. In this paper, historian Hélène Dumas draws on accounts written in 2006 by children who lived through the genocide to discuss their survival strategies in a world turned upside-down by violence.

[3] All the sources highlighted here have been digitized (see the links provided for more details) and are available for consultation in the ICRC Library. This page provides links to the photos and films available online on the ICRC audiovisual archives portal. Questions and suggestions on how to improve this page can be sent at library@icrc.org.