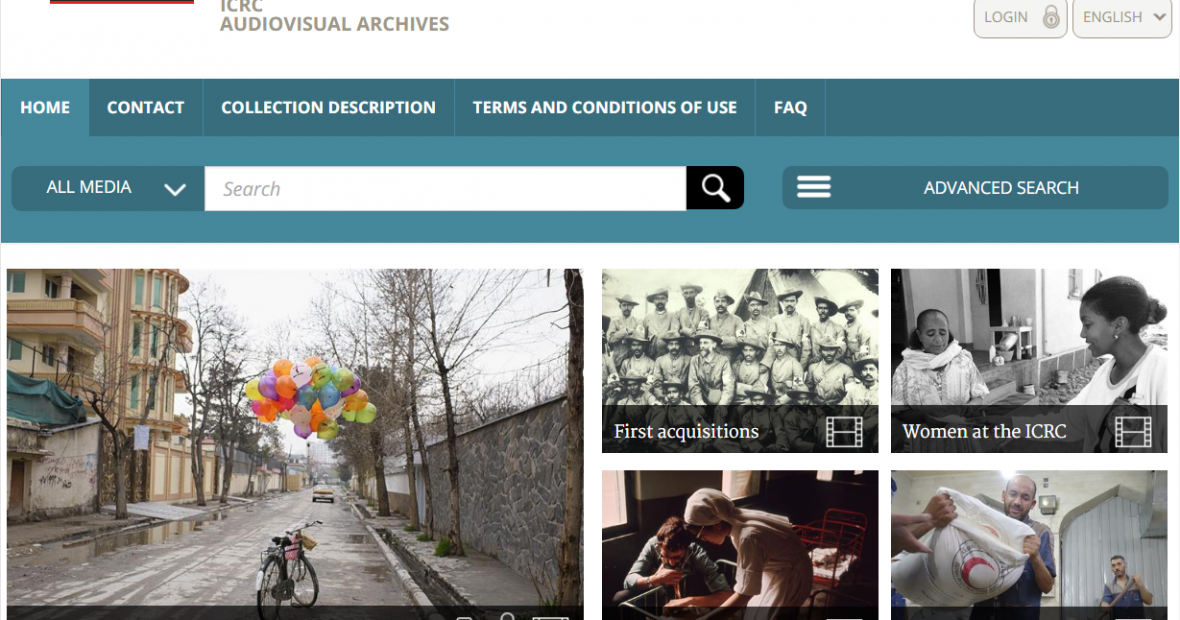 The ICRC’s collections of sound recordings, film footage, videos and photos illustrate and document the activities of the ICRC and of the International Red Cross and Red Crescent Movement as a whole from the end of the 19th century up to the present day, in all operational contexts. These archives have been continually expanded over more than 150 years and today represent a significant heritage in the field of humanitarian law and action. They preserve the memory of victims of armed conflicts and other situations of violence to which the ICRC has responded throughout its history.

The Film collection spans the period from 1921 to the present day. It holds a total of around 6’500 titles, comprising around 2’000 hours of footage, in a range of formats (35 mm and 16 mm films and videos). This footage documents major epidemics from after the First World War to the current Ebola outbreak and illustrates the work of the Central Agency for Prisoners of War during the Second World War; it also captures the ICRC’s response to conflicts such as the decolonization wars and its current operations in such contexts as Syria, the Democratic Republic of the Congo and Afghanistan. The collection is therefore a precious resource for anyone interested in history, and in ICRC history in particular. The majority of the footage is now accessible online.

From 1999 to 2013, preservation projects were conducted in cooperation with Memoriav (Association for the preservation of the audiovisual heritage of Switzerland). The ICRC has preserved/digitised its 35 mm and 16 mm films.

The Photo collection covers the period from the end of the 19th century to the present day and holds over 800’000 images, including 125’000 in digital format available in this portal. It comprises photos (originals and copies) covering the origins of the International Red Cross and Red Crescent Movement, the foundations of international humanitarian law and also conflicts and violence that took place since the German-Danish War (1848-1850). The collection, illustrating ICRC activities in favour of victims of contemporary conflicts, is daily enriched with new images made by ICRC photographers all over the world.

The Sound recording collection spans the period from the 1940s to the present day and comprises 8’700 digital sound files, which are still in the process of being logged. This collection traces the history of the ICRC through the oral tradition. Encompassing everything from personal accounts to reports of operations in the field, these thousands of hours of listening also include debates surrounding the development of international humanitarian law, International Red Cross and Red Crescent Movement congresses or institutional campaigns. The collection is remarkable for the diversity of sound recordings it holds, ranging from stories to radio broadcasts and programmes, produced by the ICRC or in partnership with the media, interviews chronicles and conferences.

From 2009 to 2013, a preservation project was conducted in cooperation with the Swiss National Sound Archive with support from Memoriav (Association for the preservation of the audiovisual heritage of Switzerland). The ICRC has preserved/digitised 6’715 original documents.