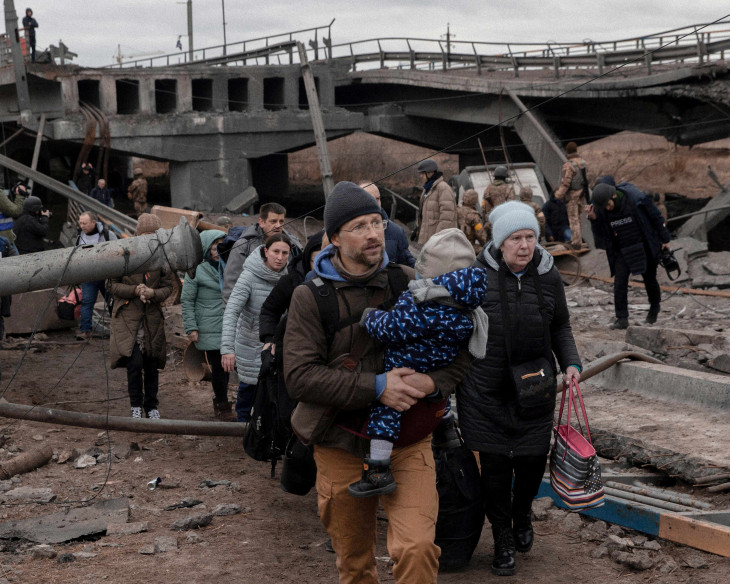 For the past two weeks, the world has watched a humanitarian crisis unfold across Ukraine. Many of our readers have reached out to us directly with questions on how the rules of war – international humanitarian law (IHL) – apply to the conflict.

In this post, our Chief Legal Officer Cordula Droege outlines the key rules of IHL governing the conflict and emphasizes the ICRC’s call for all parties to fulfil their legal obligations to avoid further civilian suffering and loss of life.

It was clear before the dramatic increase of hostilities in Ukraine that it would entail fighting in cities, widespread death, destruction and trauma, potential environmental disasters, and that civilians – as in all armed conflicts– would bear the brunt of the consequences.

Now we are here, again, trying to respond to humanitarian needs that far outpace our and others’ capacity to respond. Our method is neutral and impartial humanitarian action, and our guiding framework is international humanitarian law (IHL). We have to be humble about humanitarian action and IHL, yet both can save lives, as they have done in many conflicts around the world. We would like to answer some of our readers’ recent questions with a short recap of the key rules of IHL, offered along with the North Star that guides them: to limit the suffering of war.

Whereas the vast majority of wars currently taking place in the world are non-international armed conflicts, sometimes referred to as civil wars, what we are seeing happen in Ukraine is legally classified as an international armed conflict, a conflict between States, because hostilities have broken out between their armed forces. This means that the Geneva Conventions and their First Additional Protocol are fully applicable, as are customary international humanitarian laws and a number of weapons treaties. Human rights law and refugee law are also important frameworks which provide legal protection to the victims of conflict.

An international armed conflict exists whenever there is a resort to force between two or more States. Importantly, this is a factual assessment, independent of the question of the legality of the resort to force between those States, which is regulated by the UN Charter. The purpose of IHL is to protect people once a conflict has broken out. Additional Protocol I to the Geneva Conventions explicitly states that IHL cannot be construed as legitimizing breaches of the UN Charter.

IHL and humanitarian action cannot make up for the need to maintain peace and to reach peace again when conflicts break out. One of the Red Cross and Red Crescent Movement’s motto is ‘from humanity to peace’. It expresses the hope that preserving a measure of humanity in armed conflict will pave the way for peace. This is what IHL seeks to contribute to.

The set of rules that the Parties to the conflict in Ukraine have committed to can essentially be broken down in two overarching objectives: one, reducing the human suffering caused by the hostilities, including limits to the choice of weapons; and two, protecting people who do not or no longer participate in hostilities, most notably the civilian population and those who are wounded, who have died, or who have fallen in enemy hands. Here, we unpack each of these categories in turn.

Rules on the conduct of hostilities

Under the laws of war, there are three cardinal principles that regulate the way in which a party to an armed conflict may carry out military operations, i.e. may conduct hostilities. These are the principles of distinction, proportionality and precautions, all codified in Additional Protocol I and all customary international law. They aim to protect civilians against the effect of hostilities.

Distinction. The principle of distinction requires that the parties to an armed conflict distinguish at all time between civilians and civilian objects on the one hand, and combatants and military objectives on the other. Military operations may only be directed against military objectives. Deliberately targeting civilians is a war crime.

Civilians cannot be attacked unless and for such time as they directly participate in hostilities. There are reports of civilians in Ukraine taking up arms. Some will be incorporated into units of the armed forces, others not. Some will only take up arms sporadically. In such a fluid situation, one of the most important rules to remember is the presumption of civilian status. Civilians who do not directly participate will remain protected from any attack by IHL.

Attacks must also not be directed against civilian objects, such as civilian homes, schools, hospitals and medical facilities, unless they make an effective contribution to military action and attacking them offers a definite military advantage. As civilian objects, essential infrastructure must be spared, including hospitals, water, gas and electrical systems that provide civilian infrastructure with vital water and electricity supplies.

A number of objects, such as hospitals, goods indispensable for the survival of the population, cultural property or installations containing dangerous forces enjoy specific, additional protection. Starvation of civilians as a method of warfare is prohibited, and purposefully spreading terror among the civilian population is equally prohibited.

Proportionality. Attacks directed against a combatant or another military objective must respect the principle of proportionality. This means that it is prohibited to launch an attack that may be expected to cause incidental loss of civilian life, injury to civilians, and/or damage to civilian objects that would be excessive in relation to the concrete and direct military advantage anticipated. In other words, a military objective may be attacked only after an assessment leading to the conclusion that civilian losses and damage are not expected to outweigh the military advantage foreseen. An attack must also be cancelled if it becomes apparent that the circumstances underlying that assessment have changed.

Precautions. A party to an armed conflict must take constant care to spare civilians or civilian objects when carrying out military operations. Parties must take all feasible precautions in the choice of means and methods of attack to avoid, or at least keep to a minimum, the incidental harm to civilians and civilian property. Parties must do everything feasible to avoid locating military objectives within or near densely populated areas.

The ICRC is concerned by the fighting in Ukraine and the grave risks there for civilians, particularly in cities and other populated areas. Today, the use of explosive weapons with wide impact area is the main cause for the civilian harm that we are witnessing. It is imperative that civilian infrastructure, such as hospitals, schools, water facilities and electricity, is actively protected and not attacked. Lawful targets in their vicinity cannot be attacked unless everything possible has been done to avoid damaging these infrastructures and unless any civilian harm, including the damages’ reverberating effects, is not disproportionate.

The effects on civilians we see in Mariupol – like Aleppo, Raqqa, Tripoli or Mosul in the last years – should be a wake-up call for States to spell out more clearly how they implement the principle of distinction, including with regard to the use of heavy weaponry. For many years, the ICRC and others have called for better respect of these rules, especially in urban warfare. It is time to take the principle of distinction more seriously. Weaponry used in urban battles around the world raises very serious questions as to how States interpret the prohibition of indiscriminate attacks. It is difficult to see how the use of unguided artillery, mortars or large bombs, cluster munitions, multi-barrel rocket launchers continues to be portrayed as able to distinguish between civilians and combatants and civilian and military objects in cities and to limit the effects of these weapons as required by IHL. This is why the ICRC is calling on all States to avoid the use of heavy explosive weapons in urban areas, namely that they should not be used unless sufficient mitigation measures are taken to reduce the consequent risk of civilian harm.

On the ground today in Ukraine, the immediate steps that parties should take to uphold the principles of distinction, proportionality and precaution are essentially three: First, refrain from using weapons that are inadequate for populated areas and cause such great suffering. Second, allow civilians to leave besieged or encircled areas, if necessary through agreements on ceasefires, humanitarian safe passage, or other forms of agreements, paying special attention to groups with specific risks such as the wounded and sick, persons with disabilities, older persons, children or maternity cases. And third, avoid as much as possible to place military objectives and to fight from positions in or near densely populated areas.

Lastly, limits on the choice of weapons constitute an important part of the law on the conduct of hostilities. In general, IHL prohibits any weapon ‘of a nature to cause superfluous injury or unnecessary suffering’ and any that have indiscriminate effects.

Humanitarian law and specific weapons treaties prohibit the use, production, stockpiling, or selling of certain kinds of weapons. IHL has outlawed specific types of weapons through a series of international treaties, in particular biological, chemical and nuclear weapons, blinding laser weapons, anti-personnel landmines and cluster munitions. While the Parties have not signed the Convention on Cluster Munitions, and Russia is not a Party to the Anti-Personnel Mine Ban Convention, the ICRC condemns any use of such weapons by any actor in any conflict.

Protected persons, including prisoners of war and detainees

IHL contains strong, extremely detailed rules protecting people who have fallen into the hands of the adversary. The Leitmotiv of all of these rules is humane treatment and respect for the dignity of the wounded and sick, the dead and those detained, without distinction based on race, nationality, sex and similar criteria. These rules provide strong protections when they are interpreted and implemented in good faith.

The treatment of the wounded and sick, including the enemy’s, was the starting point of modern IHL. They must be collected and cared for, regardless of the side they are on.

Each party to the conflict must take the necessary measures to account for protected persons in its power – the wounded, sick and dead military personnel, prisoners of war and protected civilians deprived of their liberty. It must collect, centralize and transmit the required information to the other side through the ICRC’s Central Tracing Agency acting as a neutral intermediary.  All actions to prevent people from going missing or search for them ‘shall be prompted mainly be the right of families to know the fate of their relatives’.

Prisoners of war and detained civilians must be treated with dignity and are absolutely protected against ill-treatment, insults and exposure to public curiosity, including through images circulating publicly on social media. The 1949 Geneva Conventions contain specific rules governing conditions of detention and ensure the ICRC access to detainees – both prisoners of war and civilians.

The ICRC is committed to doing everything it can to work for the respect of IHL in the midst of hostilities, to evacuate civilians away from the danger of being caught in cross-fire and bombardment, to bring relief and protection to civilians and those who no longer participate in hostilities, and to visit detainees and ensure their rights are protected, to prevent people from going missing, to reunite families.

As an international armed conflict involving immense military capacities, and with humanitarian consequences of a scale not seen in such a short period of time for decades, this conflict may appear of a different order of magnitude. However, unprecedented though it may seem, from the perspective of IHL this conflict does not give rise to a new rule book: IHL was made to limit the consequences of exactly such conflicts.