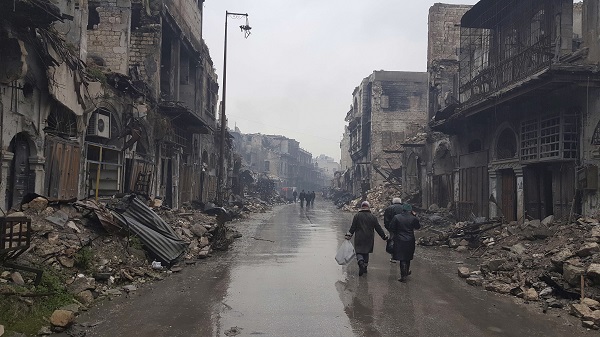 Recently, the International Committee of the Red Cross expressed its concern about the risks of rhetoric that suggests there are circumstances in which a ‘particular adversary … can be treated “as if humanitarian law doesn’t apply”’. Thomas de Saint Maurice and David Tuck build upon this, recalling that international humanitarian law is specifically designed to regulate exceptional circumstances. They note that the law contains robust rules: persons hors de combat—including enemy fighters who have become defenceless—must be protected. Finally, they remind us that nothing would justify an unlawful response to exceptional behaviour. The rules must be respected by all of the parties to armed conflict at all times and with no exceptions.

Referring to these contexts, the New York Times posted an article on 26 October 2017 that reported the International Committee of the Red Cross (ICRC) …

The article—and similar reports, such as here—goes on to explain that

[l]anguage that could appear to justify or encourage war crimes and illegal treatment of detainees has become more common on all sides of the sprawling conflicts … to the point that the Red Cross felt it necessary to remind all combatants that international law requires due process and humane treatment of detainees ‘with no exceptions [emphasis added].’

This blog post briefly outlines the ‘international law’ that underpins the ICRC’s ‘reminder’. Putting aside the many relevant historical, ethical and other considerations, what does international humanitarian law actually say in this respect?

A legal framework for exceptional circumstances

International humanitarian law applies exclusively during armed conflict. Regardless of the reasons or justifications for going to war, the law protects persons who are not directly participating in hostilities and limits the means and methods of warfare that are available to the warring parties.

International humanitarian law—also known as the law of armed conflict—applies until there is a peaceful settlement, which is generally until hostilities have ended and there is no real risk that they will resume[1]. Even after a peaceful settlement, the law continues to protect those whose lives remain affected by armed conflict, in particular detainees, missing persons and their families.

Fundamentally, this body of law regulates the behaviour of humankind at its worst in the most exceptional of all circumstances—during war. Amidst destruction and devastation, international humanitarian law preserves a space for humanity, particularly by requiring respect for and protection of civilians and fighters hors de combat.

To effectively regulate behaviour during armed conflict, international humanitarian law rests upon a delicate balance between the principles of military necessity and humanity. First, in the conduct of hostilities an attacking party must distinguish between, on the one hand, civilians and civilian objects and, on the other hand, fighters and military objectives.

Attacks must not be directed at civilians or civilian objects. Conversely, and notwithstanding limitations upon the use of certain means and methods of warfare (see here for example), the parties to a conflict are not prohibited from attacking fighters and military objectives. In accordance with the principle of military necessity, international humanitarian law accommodates the inevitability of attacks against enemies’ soldiers—as well as objects that are or have become military objectives—during war.

Whereas the enemy who poses a military threat on the battlefield is not protected against attack, the same person, once defenceless, becomes protected. This fundamental precept is enshrined in Common Article 3 of the four Geneva Conventions, which states that

Persons taking no active part in the hostilities, including members of armed forces who have laid down their arms and those placed ‘hors de combat’ by sickness, wounds, detention, or any other cause, shall in all circumstances be treated humanely, without any adverse distinction founded on race, colour, religion or faith, sex, birth or wealth, or any other similar criteria.

When an enemy fighter is wounded, sick, surrendering or detained, the rationale for attacking that particular individual ceases to exist. According to the law, the fighter becomes hors de combat, and as such is protected against attack, provided s/he abstains from any hostile act.

It follows from the protection of fighters hors de combat, that it is prohibited to order, threaten or fight on the basis that no quarter will be given. That is, it is prohibited to leave no survivors. There is a duty to give merciful consideration to the adversary and, in practice, an enemy fighter who is surrendering can be captured and deprived of his/her liberty—detention is permissible under and regulated by the law.

Not only does international humanitarian law protect persons hors de combat, it also requires the parties to an armed conflict to search for, collect, evacuate and treat the wounded and sick, including those of the enemy.

Indeed, the protection afforded to members of the enemy’s armed forces—once defenceless—extends beyond the battlefield. Common Article 3 (paraphrased here) goes on to prohibit at any time and in any place whatsoever: violence to life and person; the taking of hostages; outrages upon personal dignity; the passing of sentences and the carrying out of executions without previous judgment pronounced by a regularly constituted court, which must be accompanied by the requisite guarantees of due process.

Ultimately, international humanitarian law—including Common Article 3, as it has been accepted by all States—is unambiguous on this issue. Once hors de combat, the enemy’s armed forces, including those of armed groups, must be respected and protected. They must not be attacked and, if in the hands of their adversary, they must be treated humanely at all times.

In these ways, even in the midst of war, humanity must prevail.

A legal framework where exceptional behaviour does not justify unlawful responses

Even if the law is clear with respect to the obligations toward persons hors de combat and the prohibition of denial of quarter, the contention that it applies ‘with no exceptions’ still merits further consideration. Might the conduct of one party to an armed conflict, including acts of terrorism, negate the protection to which its members would otherwise be entitled once rendered defenceless? In law, the answer is simply ‘no’.

The designation of a group as a ‘terrorist organization’ or its conduct as ‘terrorist acts’ has absolutely no bearing upon the applicability and application of international humanitarian law. The law applies in each and every case in which—as a matter of fact[2]—two or more organized parties are in armed conflict against one another, regardless of whether they are labelled ‘terrorists’ or ‘criminals’ (see here).

In fact, international humanitarian law itself prohibits most acts that are criminalized as ‘terrorist’ acts in domestic legislation and in international conventions, such as attacks against civilians and acts or threats of violence the primary purpose of which is to spread terror amongst the civilian population.

Importantly, nothing in the law prevents States from addressing terrorism through lawful means and methods, including lawful use of force and prosecution, trial and sentencing pursuant to the requisite due process.

Indeed, the fact that international humanitarian law binds armed groups, including those labelled as ‘terrorists’, does not legitimize their existence or their acts. Common Article 3 expressly states that its application ‘shall not affect the legal status of the Parties to the conflict [emphasis added].’

And this framework is built on the premise of non-reciprocity. Violations by one party do not absolve the opposing side of its obligations. Consequently, the law prevents the Parties to an armed conflict from resort to belligerent reprisals or other countermeasures (unlawful measures that are intended to induce another’s compliance with international law). Any reprisal that would entail acts that violate Common Article 3, outlined above, is prohibited[3].

Precisely because international humanitarian law is a legal framework for exceptional circumstances—which addresses the lowest ebb of human conduct—exceptional behaviour, including large scale violations, cannot justify an unlawful response. If one wrong were to beget another, the situation would slide quickly into an uncontrolled, barbaric race to the bottom.

Balancing military necessity and humanity, international humanitarian law does not generally prohibit acts that are necessary to weaken the military capacity of the enemy. It does not favour one party to a conflict over another and does not prohibit parties from doing that which is necessary to defeat their enemy.

International humanitarian law does, however, limit war. It unambiguously protects persons not or no longer taking part in hostilities. These are obligations from which derogation cannot be justified by an enemy’s exceptional behaviour.

Of course, even if the parties must exercise restraint in their response to unlawful conduct, violations ought not to go unpunished. To the contrary, serious violations of international humanitarian law are war crimes and, as such, must be investigated and, as appropriate, prosecuted.

Finally, in its article of 26 October 2017, the New York Times notes that none of the ‘dehumanizing rhetoric’ of concern to the ICRC actually ‘called for extrajudicial killings or any other war crime.’ But today, as always, rhetoric that is unambiguously consistent with the law would go a long way to reducing the risk of misinterpretation of the relevant standards by the forces on the ground. It would affirm that, whatever the circumstances, there is a commitment to comply with the law and to break the cycle of violations.

David Tuck is Legal Adviser to the Operations at the ICRC.

[1] Commentary to Common Article 3 of Geneva Convention I, para 485.

[2] Commentary to Common Article 3 of Geneva Convention I, para 387.

[3] Commentary to Common Article 3 of Geneva Convention I, para 907.