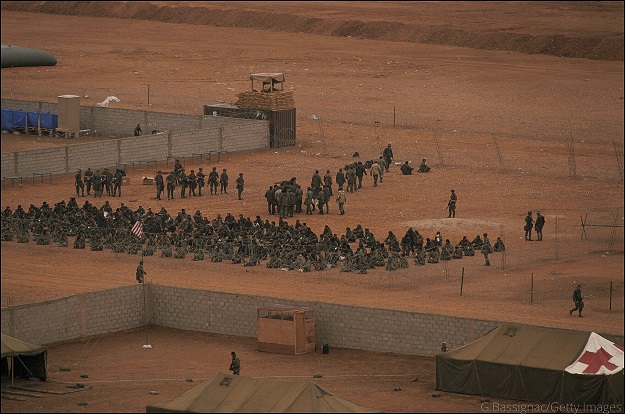 Taking prisoners in international armed conflicts has been a common practice for centuries. The Third Geneva Convention provides a practical and realistic framework, addressing the needs of prisoners of war while in enemy hands. The updated Commentary on the Convention reflects the practice that has developed in its application and interpretation while affirming its overall purpose of ensuring humane treatment of prisoners of war at all times. With this first post and following a virtual launch earlier this week, Jean-Marie Henckaerts, the head of the ICRC project to update the Commentaries on the Geneva Conventions of 1949 and their Additional Protocols of 1977, commences a series of blogs over the coming months that will analyze different issues relating to the updated Commentary of the Third Geneva Convention. The GCIII Commentary series will be run in collaboration with EJIL! Talk and Just Security. Authors are encouraged to contribute submissions to the ICRC Humanitarian Law & Policy blog on topics relevant to their expertise.
ICRC Humanitarian Law & Policy Blog · GCIII Commentary: ICRC unveils first update in sixty years

The year was 1960. Children born during the Second World War were entering adulthood, seventeen African nations declared independence, and an editor at the International Committee of the Red Cross named Jean Pictet was working with his team to finalize the English translation of the Commentary on the Third Geneva Convention relative to the treatment of prisoners of war.

Sixty years later, and drawing upon the many tests to the Geneva Conventions and their Protocols, the ICRC presented this week an updated article-by-article Commentary on the Third Geneva Convention. The update – part of a major project launched by the ICRC in 2011 to update all four of the Pictet Commentaries, as they are often called – reflects the evolution of law and practice over the past six decades, capturing experience from armed conflicts and subsequent developments in international law.

A practical tool, above all, the Commentary also identifies instances where updated technology, which has evolved at an inconceivable rate since 1960, informs the interpretation of provisions. For example, modern means of communication enable prisoners of war to connect via email, telephone calls and video calls, rather than telegrams, the fastest method foreseen in the Convention.

At the ICRC, we engage with the military and academics, with legal advisors, courts and governments, who stress to us the importance they place on the humanitarian protections at the heart of the Third Geneva Convention. The updated Commentary will be of real world value to armed forces and governments across the globe and, in this way, will strengthen the practical relevance of the Convention by making sure it remains fit-for-purpose in the decades ahead.

On 16 June 2020, the ICRC held the online launch of the updated Commentary on the Third Geneva Convention relative to the treatment of prisoners of war, for an expert panel to discuss the Commentary’s main findings. This event examined how international humanitarian law protects prisoners of war taking into account existing practice and operational challenges, and provided insights on the relevance and application of the law in practice. The online launch and panel discussion can be viewed in full here.

At its core: humane treatment of prisoners of war

It is virtually impossible to imagine an armed conflict without detainees. International humanitarian law protects several categories of detainees, including those held as prisoners of war during international armed conflicts. Risks of mistreatment or to health are heightened when a person is captured by the enemy, and the application of rules of the Third Geneva Convention is critical for such situations. These rules come not only from a moral humanitarian imperative or due to legal obligations arising from ratifying a treaty, but for very practical reasons such as to keep enemy combatants away from the battlefield, prevent their escape and maintain discipline and security in a camp. At the same time, the Convention requires parties to an armed conflict to keep prisoners in good health and prevent epidemics.

At the core of all of the 143 articles that make up the Third Convention is therefore the obligation to treat prisoners of war humanely, respecting their persons and their honour. Many articles of the Convention build upon what this basic obligation entails in practice, addressing all aspects of a prisoner’s life, from their initial capture to their final release, and expressly prohibiting the infliction of physical or mental torture and any form of coercion throughout their time in detention. The Convention protects all prisoners of war, without distinction, and requires parties of the conflict to consider the particular circumstances of each prisoner of war, including their gender, health, age and any disabilities they may have.

The Convention also lays the foundation for the protective regime under international law in relation to people going missing in war. There are several provisions that aim to prevent prisoners of war from going missing, to establish their whereabouts if they do, and to keep their families informed. These include:

To respect these rules, States are required to set up a National Information Bureau – at the outset of an armed conflict at the very latest – to collect, centralize and transmit the relevant information on prisoners to the Central Tracing Agency set up under the responsibility of the ICRC. While these institutions do not only work for prisoners of war – they also work for civilian internees and missing persons, and not only in international armed conflict – they also work in the context of non-international armed conflict and, as the case may be, other emergencies, the Third Convention lays the foundation and provides the blueprint for their operating model.

It is also important to note that the modern rules on data protection and contemporary standards on medical ethics, including medical confidentiality, have greatly impacted the manner in which these institutions work today. For example, modern standards require that wounded or sick prisoners of war be informed of the reasons why information on their state of health is being collected and transmitted to these institutions.

In order to implement the obligation to respect and ensure respect for the Geneva Conventions found in common Article 1, there are a number of provisions that require advanced measures – taken before the onset of armed conflict – or preparations to prevent violations from happening.

This requires timely preparation and planning including, for example, making sure that a State’s domestic legal framework is up-to-date, and rules and regulations are adopted that ensure compliance with the Convention. Accordingly, by providing additional measures on timely preparation, this Commentary is particularly relevant for national authorities who are in a position to execute the necessary preparation and planning, such as armed forces and government ministries and agencies that deal with detention in armed conflict.[1]

While battlefield realities change, implementation of the Third Geneva Convention must be ensured by timely preparation, including training of armed forces. For example, New Zealand Defence Forces reviewed their law of armed conflict training to update their model to better fit the modern military context, translating more complex ideas into something simple for soldiers, sailors and air personnel. The updated Commentary has and continues to serve as a key source for keeping these tailored trainings up-to-date.[2]

The lack of respect for international humanitarian law is a widely debated theme. However, it is important to remember that, in reality, parties to an armed conflict often comply with their obligations and the law is respected on a daily basis, even when this news does not make the headlines.

Humane treatment afforded to prisoners of war, care for their life and health and their repatriation occur regularly in compliance with the Third Geneva Convention. The Commentary documents instances of compliance, as well as examples of challenges to implementation and solutions found to make sure the Convention can be complied with, even in the face of practical difficulties.[3]

The updated Commentary therefore demonstrates that the Geneva Conventions remain a relevant body of law. They help to save lives and respect dignity of persons in situations of armed conflict.

Conclusion: working towards a shared understanding

The new Commentaries are more than just an in-house publication. In addition to an internal project team, the drafting process of the updated Commentary on the Third Convention involved a dozen external contributors, a peer review group of some 50 experts from all around the world, and an editorial committee consisting of six senior ICRC and non-ICRC lawyers revising over 10,000 drafts of the Commentary (roughly 70 drafts for each of the 143 articles of the Convention). Together, this large group of dedicated, experienced, and knowledgeable people greatly contributed to the richness of the analysis found in the final product.

By clarifying the status of prisoners of war and the treatment they must be afforded, and positioning their capture in modern times, the updated Commentary on the Third Geneva Convention is a resource and guidebook for practitioners and a handbook for experts. Above all, it is hoped it will become, like its predecessor, an invaluable source for interpreting and applying the Third Geneva Convention to safeguard the humane treatment of prisoners of war in armed conflicts for decades to come.

[1] For example, see section C of the updated commentary on common Article 2.

[2] For more, see remarks by Brig. Lisa Ferris, Director of Defence Legal Services of the New Zealand Defence Forces during the virtual launch of the updated Commentary, from minute 49 of the webinar.