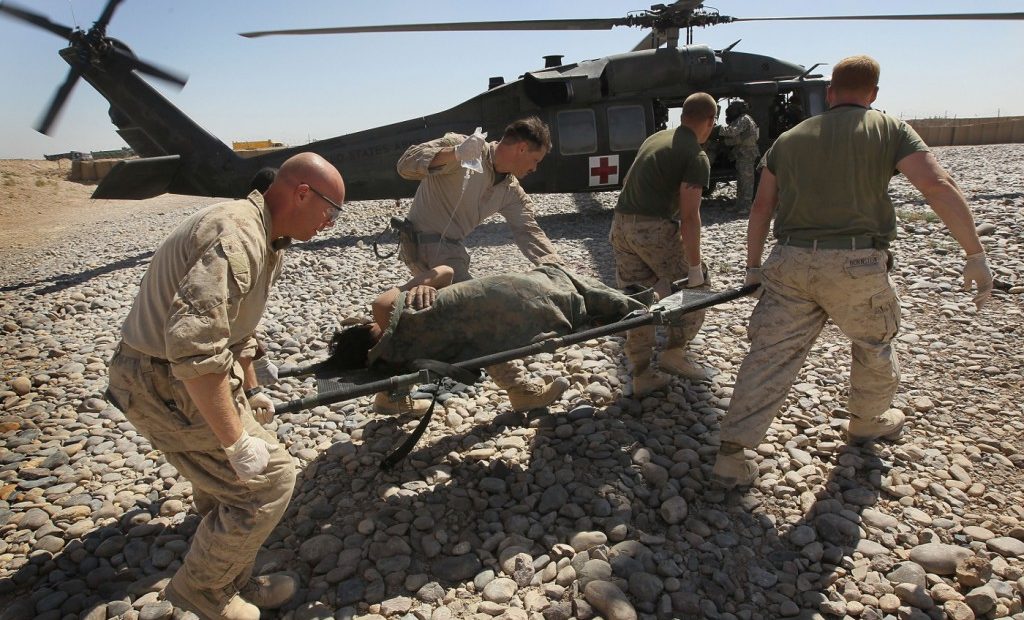 U.S. Marines carry an enemy prisoner of war to a medical evacuation helicopter near Marja, Afghanistan, on September 25, 2010. (Scott Olson/Getty)

Last month saw the publication of the updated Commentary on the First Geneva Convention which is now available from Cambridge University Press in Hardback, Paperback and eBook format. Jean-Marie Henckaerts, International Committee of the Red Cross legal adviser and head of the project to update the Commentaries shares his experience of working on this colossal project.

This article was first published in the Cambridge Core blog.

The original Commentaries on the Conventions date back to the 1950s and those on the Protocols were subsequently written in the 1980s. Since the original Commentaries were published, the Conventions and Protocols have been put to the test. Practice with respect to their application and interpretation has grown significantly. The new Commentaries seek to capture these developments and to reflect contemporary reality and to provide up-to-date legal interpretations.

The many wars still raging in the world all have a link to this new Commentary. To begin, most armed conflicts today are of a non-international character and these are governed by common Article 3 which is part of the First Convention.

It has been in this area that we see the biggest development in the past 60 years; something the drafters of the Conventions couldn’t have foreseen at the time. For example, we must now consider questions like what is required to trigger a non-international armed conflict as opposed to an internal disturbance? When does a non-international armed conflict start and when does it end? And what is the geographical scope of application of IHL in such a conflict? These questions are now the subject of a much more detailed analysis than in the 1950s when the original Commentaries were written.

The past few decades have also seen much more attention paid to the substantive rules in common Article 3 dealing with the prohibitions on murder, torture, mutilation and ill-treatment. All these concepts have been defined in much more detail.

Based on developments in practice, we have also added new sections on the prohibition of sexual violence, the principle of non-refoulement and compliance with common Article 3.

So the result is that we went from a 23-page Pictet commentary to a 150-page updated commentary. In the earlier commentary it was said that, for most of these acts, these terms were clear on their own and didn’t need to be defined. That is no longer tenable and today the new Commentary gives more guidance on these prohibitions.

An insider’s perspective on the work involved in the update

Updating the commentaries on the Geneva Conventions of 1949 and their Additional Protocols is a task that resembles more a marathon than a sprint. This is hardly a surprise, as it is now more than 60 years since the first set of Pictet Commentaries appeared, giving practical guidance on how the conventions should be implemented. Since then the 559 articles of the Conventions and Protocols have been applied and interpreted in many ways. This marathon project is challenging in a number of respects.

First of all, an update of the Pictet commentaries had never been done before. We had to set up the methodology and process to enable us to follow in the footsteps of Pictet. This is a real challenge because the Pictet commentaries are established and authoritative publications, but which have also become outdated and incomplete in many respects.

Secondly, we are doing this more than 60 years after the initial commentaries were written. So there is more than 60 years’ worth of practice to capture, research and summarize: military manuals, case law, books and articles, our own archives and legal interpretations and experience from past conflicts generally.

It is also a challenge to ensure coherence across the commentaries and across the Conventions. This is not easy with so many people involved in the project: we had seven ICRC colleagues working on the first Commentary, ten external contributors, a peer review group of 60 externals and numerous ICRC colleagues who were consulted and contributed at headquarters and in the field.

In addition, what we say now for the First Convention, for example about humane treatment, also has to stand up when we come to the commentaries on the Third and Fourth Conventions and talk about the treatment of prisoners of war and civilians.

Once we get to the Commentary on the Fourth Convention we will review the need to update the common articles again, for example to capture new developments or reactions by States.

So after all this hard work we are of course excited to see the result in this beautiful new book which we recommend to all practitioners and scholars in this field of law.

Jean-Marie Henckaerts is head of the ICRC’s project to update the Commentaries on the Geneva Conventions of 1949 and their Additional Protocols of 1977.