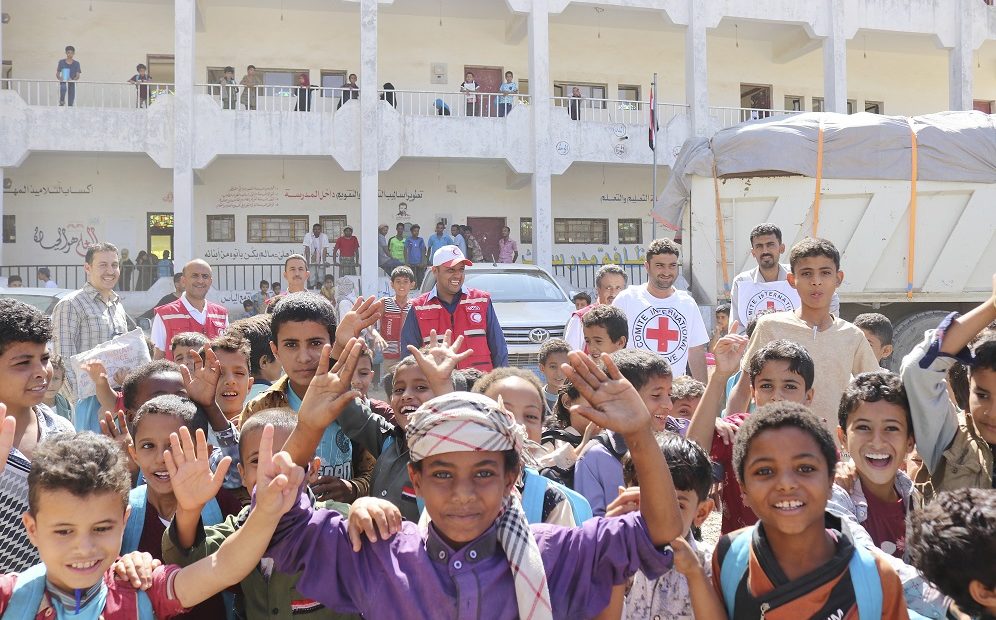 Today we launch the 33rd International Conference of the Red Cross and Red Crescent, a unique setting where components of the Red Cross and Red Crescent Movement and States come together on the same footing to discuss a range of humanitarian concerns, including important issues relating to international humanitarian law (IHL). Notwithstanding the excitement and enthusiasm surrounding the Conference itself, it is the steps taken after the closing ceremony that matter most to the people for whom the Movement is working to protect and assist.

This week marks the sixth International Conference of the Red Cross and Red Crescent since I started working for the Movement some twenty years ago, and I am as enthusiastic as ever to get started.

This year’s International Conference is aptly titled ‘Act Today, Shape Tomorrow’. As the name suggests, the Conference is taking place at a time when the humanitarian community is at a critical crossroads, in need of a forward-looking approach on how it will meet the needs of affected people and communities. Embedded in the agenda are far-reaching questions for humanitarian action: What can the Movement and States do to ensure that IHL stays relevant and is respected in both contemporary armed conflict and the conflicts of the future? How can the humanitarian community keep up with advances in technology as well as shifts in population movements, especially towards cities? What steps must be taken to maintain and strengthen trust in humanitarian action when there is a noticeable decline in confidence vis-à-vis governments and institutions?

To tackle these issues systematically, the 33rd International Conference is divided into three distinct themes or ‘Commissions’, with an entire day dedicated to each theme. The conference commences on the 10th with the Commission entitled International Humanitarian Law: Protecting People in Armed Conflict. Wednesday, the 11th is a deep dive into exploring Shifting Vulnerabilities and, last but not least, the Conference ends on the 12th with a day devoted to addressing Trust in Humanitarian Action.

IHL and the International Conference: an historical affair

The deep-rooted history of the International Conference reveals that it has always served as a key forum for discussing, debating and shaping IHL. Participants of the first Conference, in Paris in 1867, discussed the implementation and potential revision of the Geneva Convention adopted just three years prior. The second Conference, in Berlin in 1869, resulted in the publication of the first issue of the Bulletin international des Sociétés de secours aux militaires blesses (International Bulletin of Societies for Relief to the Wounded), a precursor of today’s International Review of the Red Cross. Much later, in 1948, participants of the 17th Conference in Stockholm agreed on the “Revised and New Draft Conventions for the Protection of War Victims: Texts Approved and Amended by the XVIIth International Red Cross Conference“ an important preparatory step for the 1949 Geneva Conventions.

Participants have repeatedly made clear their desire to continue capitalizing on the Conference for this purpose. From increased urbanization of warfare and new technologies to climate change and counterterrorism, they have no shortage of challenges to address and analyze during this year’s discussion.

This year’s International Conference will not break with tradition, devoting all of today to the ‘IHL Commission’. Chaired by Ambassador Carole Lanteri of Monaco, the Commission will begin with a Plenary Session, where we will hear voices from conflict zones as well as eminent diplomats, academics and practitioners about what IHL means to them in their work and what they view to be the challenges that lie ahead. This will be followed by five ‘spotlight sessions’, interactive platforms to discuss pressing issues in depth:

Outcomes related to IHL: A resolution and pledges

Resolutions are one of the clear highlights of the International Conference. As in years past, a resolution related to IHL will be adopted after it is negotiated in the drafting committee. This year’s resolution is self-evident in its aspirations, entitled ‘Bringing IHL home: A road map for better national implementation of international humanitarian law’.

In addition to resolutions, participants will have an opportunity to submit pledges, which are a flexible and non-binding method to promote or implement specific activities or establish useful platforms for discussion with governments and other humanitarian actors (see the searchable pledge database where participants have already published pledges for the 33rd International Conference).

This year, the ICRC has been involved in drafting a range of model pledges relating to IHL, which States and National Societies are encouraged to emulate. Among the numerous model pledges containing IHL issues, the ICRC has co-drafted with the IFRC and consulted with the Movement Sexual and Gender-Based Violence Working Group on a model pledge on sexual and gender-based violence (SGBV).

Preventing and responding to SGBV was put center-stage in Movement priorities by Resolution 3 of the previous International Conference. Conscious of the urgent need to make progress, the ICRC and IFRC’s model pledge contains four actions designed to support States to review their domestic legal frameworks and implement international SGBV-related obligations, integrate the prohibition of sexual violence into activities of armed and security forces and detaining authorities, ensure comprehensive response services for victims and survivors and ensure that disaster and emergency management plans and activities include measures to prevent and respond to SGBV.

The International Conferences provide a unique opportunity that only happens once every four years. During this small window of time, there is always immense pressure and excitement surrounding the execution of the Conference itself, as well as its outcomes such as the resolutions and pledges. That said, the reason that the Movement and States pour so much energy into the Conference, and indeed the raison d’etre of the Conference itself, is ultimately to reduce suffering of people and communities on the ground affected by armed conflict, disasters and other emergencies.

The power of humanity cannot be confined to the halls of the Conference if it is to serve its purpose; participants must take their commitments home and implement them. While tremendous enthusiasm is funneled into the 33rd International Conference, and rightfully so, it is the steps that are taken afterwards that matter most.