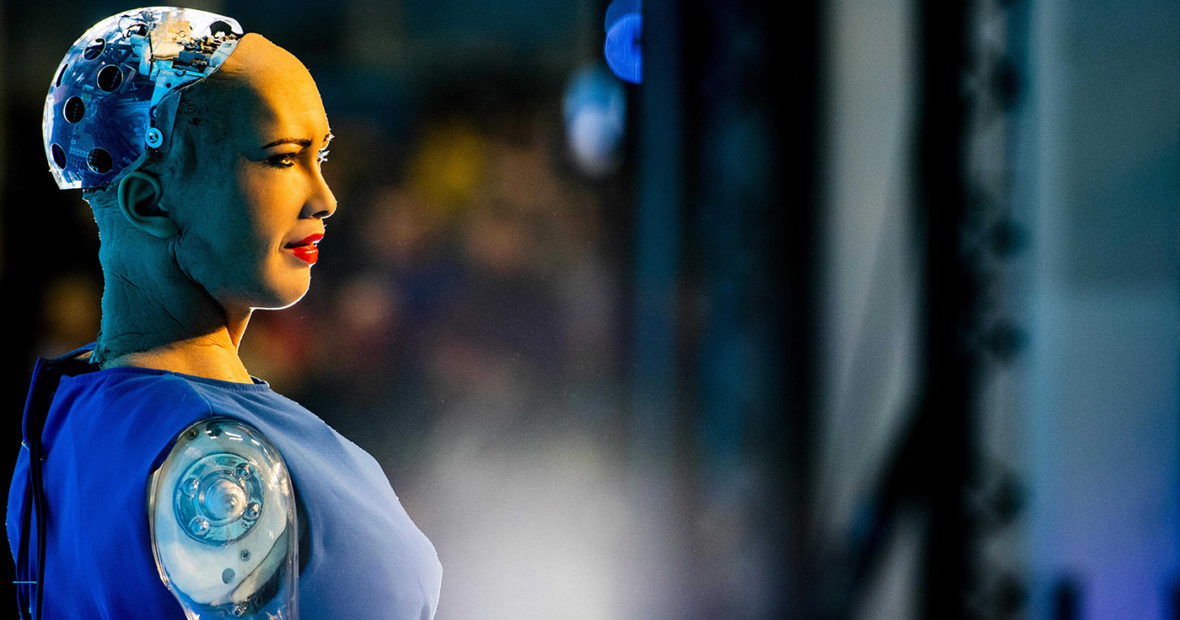 In December 2019 the International Red Cross and Red Crescent Movement will meet in Geneva as it does every four years for our International Conference. Once again, we will gather under a banner promoting the power of humanity. But what is humanity and what is the power behind this slogan?

Humanity means three different things: a species; a behaviour, and a global identity. The historical relationship between these different dimensions of humanity has been elegantly discussed by the late Bruce Mazlish in his 2009 book The Idea of Humanity in a Global Era and it is important to distinguish between these three aspects of being human as we prepare to meet as a global humanitarian movement once again.

The first meaning of humanity describes a particular kind of animal that biologists encouragingly call homo sapiens – or wise human – and which seems distinct from all other animals because of its powers of language, reasoning, imagination and technology. This biological and evolutionary use of the term has the same meaning as “humankind” and marks us out as a particular life form that is different to other kinds of animal and vegetative life.

The power of the human species is considerable over the non-human world. This is mainly because our intelligence has consistently invented and deployed tools and technology which means we have come to dominate the earth, and our imagination has shaped religious and political meanings around which we form competing interests and social movements.

Our tools mean we are not a simple species but always function as a hybrid species – part human and part technology – in a constantly changing mix of human and non-human components. This hybrid humanity must infuriate non-human life like lions and microbes who could easily “take us down” in a fair fight of simple life forms, but who have consistently encountered us in hybrid forms in which we merge our humanity with spears, guns, horses, cars, vaccines and antibiotics.

We operate routinely in these human-machine interactions (HMI) of various kinds. I am doing it now typing on my Macbook Air with an electric fan to keep me cool on a hot summer’s day. Our mechanization gives us exponential power and unfair advantage over non-human life forms both large and microscopic, which tend to remain simple in one form except for bacteria and viruses, our most threatening predators, which can change form relatively fast.

Our essential hybridity with other animal, plant and machine life is now in the emergent stages of a giant leap towards new forms of power which we cannot envision. New applications of biotech, robotics and artificial intelligence (AI) mean that our hybrid humanity is about to expand exponentially in a way that is already changing what it means to be human. Today’s technologists are focused hard on simplifying human-machine interfaces – different types of “dashboards” which use our five human senses and recognize human gestures so that our humanity interacts seamlessly with AI of various kinds. These interfaces will increasingly be embedded in our bodies and minds as new levels of interactivity with technology which will inevitably change the experience of being human and the power of humanity.

Technology will not just change us where we are but also change where we can be. Humanity will be enhanced in time and space but also relocated across time and space. For example, because I am on Twitter or Skype, I can already be visibly present elsewhere, speaking and responding in thousands of different places across time and space. This is radically different from my great grandmother who could only ever really be visible and engaged in one place at one time, or in two places at two times when someone far away was reading a letter from her.

This time-space compression and its resulting context collapse which began with radio and television is an ever-increasing feature of being human. Some of our grandchildren will probably be talking and listening simultaneously in a hundred different places at once in embodied replicas as holograms or humanoid drones. They will probably be fluent in all languages, move through space much faster than us and live forever on earth and in space because of biological and AI enhancements. Our machines will develop new levels of autonomy which, although created by humans, are inevitably adapted by machine learning into new forms of non-human and non-animal life.

This all means that the power of humanity as a species is about to increase dramatically because of a revolution in human-machine interaction which will see new forms of hybridity beyond our current imagining. Our human power will become even greater but what about our wisdom and the way we use this new power of humanity? In short, what about the ethics of our behaviour in our new hybrid humanity?

We now come to the second meaning of humanity which is used to describe a certain moral value that we can see operating across humankind as kindness and compassion for one another. We can therefore understand this second meaning as the kindness of humans.[1] This humanity is our first Fundamental Principle and primary purpose in the Red Cross and Red Crescent Movement and has been summarized as follows since 1965:

“To prevent and alleviate human suffering wherever it may be found (and) to protect life and health and ensure respect for the human being.”

This principle of humanity is the fundamental value at play in every Red Cross and Red Crescent worker wherever they are in the world today. If you stop one of them in whatever they are doing – taking blood donations in a major city, organizing relief in war or disaster, or negotiating with diplomats in the UN Security Council – and ask them why they are doing it, each one them should simply answer: “I am trying to protect life and health and ensure respect for human beings.”

This is humanity in action and it is the power of this humanity – humane behaviour towards other humans – that we seek to celebrate, improve and increase in our Movement’s 33rd International Conference in December.

Humanity in this sense is human behaviour that cares for other humans because of a profound and universally held conviction that life is better than death, and that to live well means being treated humanely in relationships of mutual respect. This commitment is a driving principle in the rules of behaviour in the Geneva Conventions, whose 70th anniversary falls this year, and in the Disaster Laws recommended by the Movement to ensure better disaster prevention, preparedness and response around the world.

The Red Cross and Red Crescent Movement is at once symbol, advocate and embodiment of this ethic of humanity and so is constantly working emotionally, judicially and practically to increase humanity as a dominant form of human behaviour in extreme situations. This is not easy, of course, because the human species is ethically ambivalent and not simply driven by an ethic of humanity. We are also deeply competitive, cruel and violent as a species and often believe that some things we have constructed are much more important than particular human lives. The reason that the call for humanity is so loud is because our record of inhumanity is so long, and the power of inhumanity is often greater than the power of humanity.

And what of humanity’s behaviour towards non-human life? In our era of climate crisis, environmental degradation and multiple species extinction, the moral principle of humanity is looking increasingly self-referential and incomplete as a primary ethic for the human species. Quite simply, it is not enough for humans only to be kind to humans.

The principle of humanity as currently expressed is a classic example of speciesism in ethics. It cares only about one species – our own. We may claim that the principle of humanity is a niche ethic for calamitous human situations which rightly trumps wider ethical considerations in extremis, but this is neither true nor realistic. It is not true because the principle of humanity already takes account of the natural environment in the laws of war and the norms of disaster response and so recognizes the importance of non-human life in its own right and as means to human life. Nor is it realistic at a time when our biggest existential challenge as a species arises from our relationship with the non-human world around us.

The principle of humanity must, therefore, keep pace with the ethical evolution of humanity (the species) and needs to expand its purpose and behaviour towards non-human life. This currently includes all animal and vegetative life. But, in future, it is increasingly also likely to include non-human machines like robots and AI which may develop their own levels of consciousness, feelings and rights as they increasingly merge with humanity – the species and its ethics – in hybrid forms.

We may have even less time to think hard about what it means to show humanity to non-human environments and animals in the Movement’s humanitarian norms and work. At the moment, our humanitarian action can be profoundly inhumane to non-human life, neither protecting nor respecting it.

With all this uncertainty about what exactly it may mean to be human in future and the persistent record of our inhumanity to each other and towards non-human life, what sense does it make to try to aspire to a single global identity as billions of human beings?

The purpose of this single political humanity is to build a human “we” in which can share a common species consciousness as one group sharing a single planetary “home” and so work together on common problems and common opportunities that face the whole of humanity.

This political sense of being a single global group is experiencing push-back today as a broad-based politics of ethnic and economic nationalism expresses scepticism about globalism of all kinds. This political turn sees many people asking national politicians to think “more about us here” and “less about them over there”. But our Movement continues to argue that it is important to imagine and build a global sense of humanity because our common human problems are intense and interdependent, and can only be solved internationally not just nationally.

There are five truly existential problems that we all share as members of the human species, and always have done. Threats from each one can be significantly reduced if we work together to solve them in the spirit of Dumas’ Three Musketeers: “all for one and one for all”. This is what we try to do at the International Conference. Our perennial five problems are:

1. The problem of our violence as a species as it plays out terribly in war and violent crime.
2. Our struggle for fairness and our desire to reduce inequalities between us.
3. Our predators and their threat to our health which now take mainly microscopic form as infectious microbes, or chronic and autoimmune diseases in which we attack ourselves.
4. Our relationship with the non-human environment and its impact on human survival.
5. The promethean risk of our creativity and how our technological inventions help and harm as they change the world around us and redefine humanity itself in new hybrid forms.

These five deep species problems will all be raised in various forms at our Conference in December. They will require a powerful response by all humanity, with an ethic of humanity, to ensure the survival of humanity.

[1] Oxfam plays on the relationship between humankind and kind humans in their ongoing global campaign “Be Humankind” which was launched in 2008.