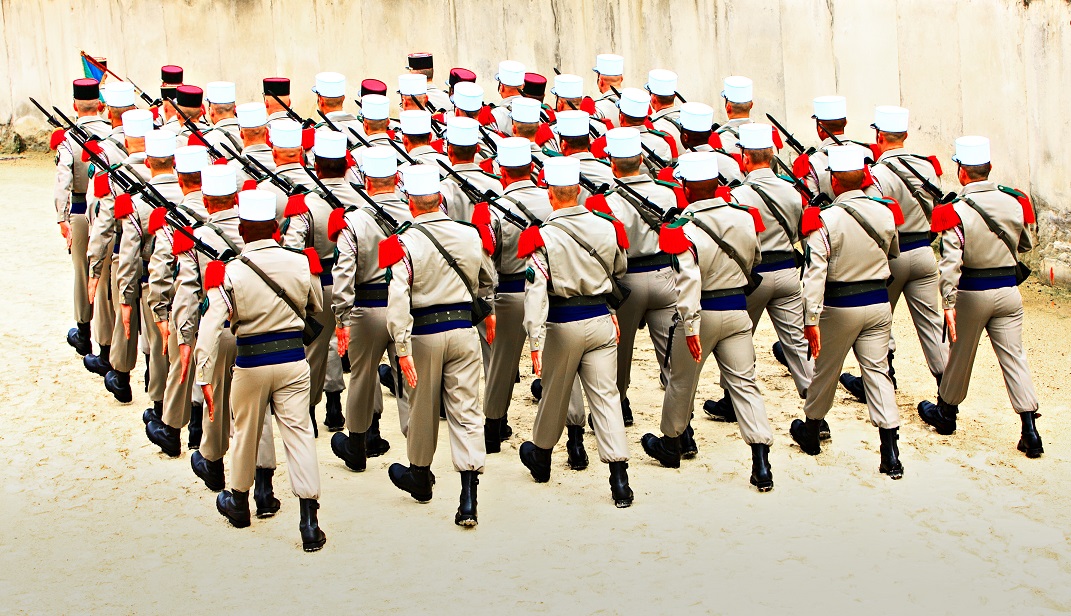 In international armed conflict, citizens of non-belligerent States can (and do) find their way onto the battlefield. Whether they arrive as volunteers, security company employees, or mercenaries, so-called third-country nationals test the common assumption that States fight wars with armies of their own loyal citizens. But foreign fighters are nothing new. They are a regular feature of war, and the law of armed conflict reaches and protects them like anyone else.

In this post, ICRC Senior Legal Adviser Ramin Mahnad explains what the Geneva Conventions and other sources of the law of armed conflict – international humanitarian law (IHL) – say about fighters who are not nationals of the belligerent States.

International humanitarian law does not prohibit participation in hostilities by third-country nationals. There is no rule requiring States to rely exclusively on their own citizens to comprise their armed forces, and individuals who come from abroad to fight are not, without more, violating IHL. However, the fighters’ nationalities and the circumstances of their participation can affect their status and corresponding rights if they fall into the hands of the adversary.

Whatever legal category they belong to under the circumstances and whatever their nationality, detained, wounded, and deceased third-country nationals who have engaged in combat remain within IHL’s scope of protection at all times. No one affected by armed conflict may be excluded from legal protection because of their actions, or on grounds of their citizenship.

What are the rights and protections of detained third-country nationals? Are they protected as Prisoners of War (POWs)?

When fighters from non-belligerent States are captured, their status largely depends on the type and degree of affiliation they have with the State they are fighting for. If, for example, they join the armed forces of the State prior to their capture, or if the State incorporates their unit into its armed forces, the captured combatants are protected as prisoners of war (POW) under the Third Geneva Convention. Depending on the treaties in force, their POW status might turn on different criteria, but nationality is never one of them.

The detaining State is required to grant third-country nationals with POW status the full range of the Third Convention’s protections. The State must treat them humanely and with respect for their honour, register and notify them to its National Information Bureau and the ICRC’s Central Tracing Agency, allow them to correspond with their families, protect them from exposure to public curiosity, and provide them with appropriate living conditions in case of internment, among other things.

Importantly, third-country nationals captured while serving in the adversary’s armed forces are entitled to combatant immunity. The right to participate in hostilities, which shields captured troops from treatment as criminals, does not cease to apply just because a fighter is a citizen of a non-belligerent State. As with other POWs, the capturing State may thus intern them until the end of active hostilities to prevent a return to the battlefield, but it is barred from prosecuting them merely for having engaged in violence against its forces.

If there is any doubt about whether a person who has participated in hostilities is entitled to POW status, they must be granted the POW protections of the Third Convention until their status has been determined by a competent tribunal.

Are third-country nationals who fight in a war ‘mercenaries’?

The mere fact that someone fights for a foreign country does not make them a ‘mercenary’ for that State under the law of armed conflict. In fact, treaty and customary IHL define the term ‘mercenary’ much more narrowly than its use in public discourse might sometimes suggest.  For example, members of the armed forces of a belligerent State – whatever their nationality – cannot, by definition, be considered mercenaries. Consequently, any person who joins a foreign State’s armed forces is not a mercenary and cannot be denied POW protection (including immunity from prosecution) on such grounds.

Even if third country nationals take part in fighting without joining a State’s armed forces, they are not automatically considered a mercenary under IHL. To treat them as mercenaries, a State would additionally need to prove, among other things, that they are motivated to take part essentially by the desire for private gain. It would also have to show that they were promised, by or on behalf of a Party to the conflict, material compensation substantially in excess of what that Party pays its armed forces.

A person who falls within the definition of mercenary is not entitled to POW status but remains protected by other rules of IHL, as further explained below.

What is the status of foreign personnel of private military and security companies?

Private Military and security companies (PMSCs) are not, as such, a legal category under the law of armed conflict. The status of a third-country national who works for a PMSC therefore depends on the same factors as any other person of that nationality. In a situation where the PMSC forms part of the armed forces of the State, the personnel of the PMSC are entitled to POW status like any other members of the armed forces (and the State is responsible for their actions just as for its other armed forces). The status of PMSC personnel from third countries is thus highly dependent on the facts in each situation.

What does the law say about third-country nationals who fight without being members of the armed forces of a State?

All third country nationals who fight without meeting the criteria for protection as POWs upon capture still benefit from protection as civilians under other sources of IHL. The Fourth Geneva Convention, Additional Protocol I, and customary IHL can all potentially apply, and, in contrast to the POW regime, the nationality of civilians can matter for specific rules. In any case, IHL will safeguard their humane treatment, ensure that the Central Tracing Agency is able to notify their families and the countries concerned, regulate the material conditions and procedural safeguards applicable to the internment of foreign nationals who are an imperative security threat, and guarantee a fair trial in case of criminal charges, among other things.

Although IHL does not prohibit civilian direct participation in hostilities, it does discourage it. Civilians who participate in hostilities do not benefit from combatant immunity. They are thus liable to prosecution for the mere fact of having participated in the conflict. Importantly, however, their right to a fair trial and other judicial guarantees must be respected.

Can enemy forces target third-country nationals on the battlefield?

Insofar as the conduct of hostilities is concerned, the nationality of individual fighters has no bearing on whether they are lawful targets. IHL prohibits attacks against civilians, unless and for such time as they directly participate in hostilities. Civilians are all persons who are not members of the armed forces of a party to the conflict. For purposes of the conduct of hostilities, the armed forces of a party to the conflict comprise all organized armed forces, groups and units which are under a command responsible to that party for the conduct of its subordinates. All of the aforementioned categories operate without regard to nationality.

Are home States responsible for the conduct of third-country nationals?

Despite not being parties to the conflict, the home States of third-country nationals are responsible for disseminating the content of the Geneva Conventions and their additional protocols to their armed forces and to their civilian populations. They are also obligated to criminalize, investigate, and prosecute, where appropriate, grave breaches of the Geneva Conventions, including those committed by their nationals in conflicts taking place outside their own territory. These obligations reflect, and operate in addition to, the general obligation to respect and ensure respect for IHL under Common Article 1 and customary law.

No matter how they make their way to the battlefield, fighters from non-belligerent States will invite scrutiny. From a legal standpoint, there is no room for doubt that they are entitled to the full protection of IHL, and that they cannot be categorically excluded from any protected status – POW or civilian – solely on account of their non-belligerent nationality.