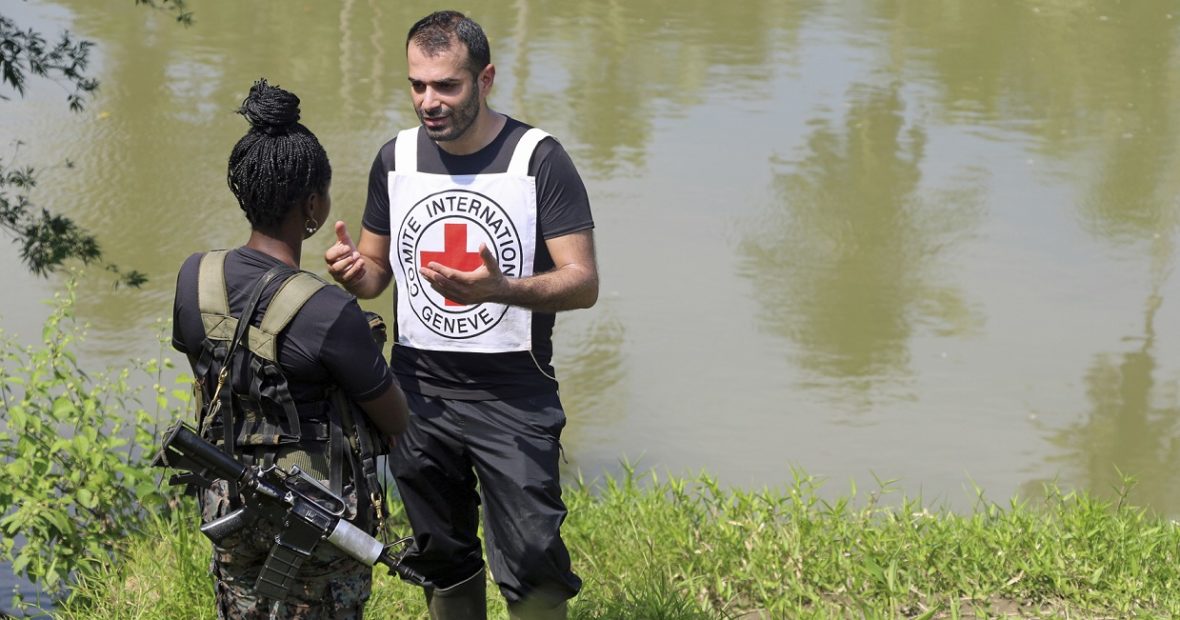 In 2020, the ICRC counted 614 armed groups of concern to the organization’s humanitarian operations around the world. As part of its impartial humanitarian work, the ICRC had contact with roughly three quarters of these groups – irrespective of the countries in which they operate, their ideology, religion, motivation or any other characteristic. The ICRC recently published a position paper elaborating the main reasons for the organization’s engagement with armed groups, with a focus on non-State armed groups (NSAGs) that are parties to armed conflicts, and some of the challenges of such engagement. In this post, Jelena Pejic, ICRC senior legal adviser, Irénée Herbet, Head of Global Affairs & Non-State Armed Groups, and Tilman Rodenhäuser, ICRC legal adviser, highlight some of the paper’s findings.
ICRC Humanitarian Law & Policy Blog · ICRC engagement with non-State armed groups: why and how

Humanitarian engagement with armed groups –notably with the approximately 100 non-State armed groups that can be legally classified as parties to non-international armed conflicts – has long been a defining feature of the ICRC’s work. Our main reason for this is quite straightforward: to ensure humanitarian assistance and protection for persons affected by armed conflict and other situations of violence, in accordance with our mandate. This includes providing life-saving assistance to persons living in areas controlled by armed groups, supporting healthcare facilities that treat the sick and wounded in such areas, or strengthening groups’ knowledge of and respect for the applicable legal framework.

In light of the devastation and suffering caused by armed conflicts and other situations of violence, and exacerbated by behaviour contrary to international humanitarian law (IHL) and other bodies of law, our engagement with armed groups is a matter of humanitarian necessity.

Engagement with armed groups is, first and foremost, a precondition for the ICRC’s safe access to populations and persons affected by a non-international armed conflict (NIAC) or other situations of violence. The sad reality of today’s armed conflicts is that too often, civilians are directly attacked and killed, houses and livelihoods are destroyed, people suffer from starvation and lack of health care, and children are left without education and recruited into fighting forces. Detainees are harshly treated, and families are displaced or otherwise torn apart, unable to connect with each other and loved ones. Sexual violence is frequent. The list goes on.

We engage with all parties to armed conflicts, including NSAGs, to gain access to civilian populations and persons located in territories in which these groups operate or exercise control so as to be able to provide affected populations with protection and assistance, in accordance with our humanitarian mission.

Second, engagement with all parties to a conflict, including NSAGs, is the only way to ensure that they understand and accept the ICRC as a neutral, independent, and impartial humanitarian organization. This acceptance is the key that enables us to access populations and persons living in NSAG-controlled territories, or those in which they operate. It is essential to allow our staff to operate in safety. A NSAG must understand who we are, what we do, and trust that our action in favor of people affected by the armed conflict is based exclusively on humanitarian concerns. A lack of understanding, or a misunderstanding of our work, can have direct consequences on the safety and security of our staff.

Third, engagement is a prerequisite for promoting international humanitarian law and other relevant legal frameworks as a means of ensuring respect for the law and thus preventing/alleviating the suffering of the victims of armed conflict and other situations of violence. Our efforts to encourage NSAGs to improve their observance of the law can only take place through an adapted and continuous protection dialogue with such groups and those wielding influence upon them.

The ICRC’s 2018 Roots of Restraint in War report identified various sources of influence on NSAG behavior. These range from the integration of IHL into a group’s own rules and disciplinary system, to the promotion of IHL norms through reference to local beliefs as well as other legal traditions, customs and practices that encapsulate similar norms of restraint, or help to convey a sense of such restraint through analogy to them. (See here for examples of the ICRC’s work on religion and humanitarian principles).

And fourth, it should be recalled that the ICRC is the only impartial humanitarian organization explicitly mentioned in Common Article 3 of the 1949 Geneva Conventions as an example of an organization that may offer its services to the parties to a non-international armed conflict, including non-State ones.

A proven record of tangible results

For example, in 2020, the ICRC acted as a neutral intermediary in the simultaneous release of more than 1,000 detainees between the Yemeni authorities and the Ansarullah Movement in that country. While this operation was the largest simultaneous release of prisoners between the warring sides, it was built on the trust we had gained through facilitating similar releases of detainees in Yemen over the year preceding the exchange.

While exceptional in scale, the operation in Yemen is no exception. The ICRC regularly acts as a neutral intermediary in the release of both civilians and security and armed forces members who are held by NSAGs. For instance, over the past few decades we facilitated the release of more than 1,800 people held by NSAGs in Colombia, including 22 people in 2020. Moreover, for over a decade we have visited detainees (members of the Afghan National Security Forces) held by the Taliban in the west of Afghanistan. Visits to detainees in the hands of NSAGs are part of our engagement with all parties to armed conflicts:  In the same period, we were conducting systematic visits to persons detained by Afghan, international and US forces.

While visiting detainees is a unique feature of the ICRC’s work, our protection and assistance operations are much broader. They range from sustained dialogue with NSAGs to contribute to a better understanding and implementation of IHL rules, to the provision of assistance to persons living under NSAG control. The latter can be diverse and is defined by the needs of the civilian population. In some contexts, this may require facilitating the clearance of unexploded remnants of war and re-leveling damaged agricultural land to assist farmers; in other situations, it will require the rehabilitation and support of medical infrastructure in an area under the control of non-State forces. Such operations and engagement are particularly important for the 60 to 80 million people we estimate as living under the exclusive control of armed groups.

Direct engagement with NSAGs and access to territories in which NSAGs operate enables us to maintain proximity to people affected by conflict. Over the past decades, however, the operational environment for organizations like the ICRC has become increasingly complex. Two trends are worth mentioning in particular.

The first trend is a proliferation of armed groups over the past decade. In some of the most complex recent conflicts, analysts have observed hundreds, if not thousands, of groups operating in a single country. The multiplication of armed groups, their diverse nature, and the different ways in which they operate make it increasingly difficult for humanitarian organizations to operate safely. Put simply, while negotiating safe humanitarian access with the leadership of a hierarchically-structured NSAG that controls a clearly delineated part of a territory is a challenge, the task becomes significantly more complex when humanitarian negotiations must be conducted with multiple groups, alliances of groups, splinter groups, and changing leaderships. Each negotiation takes time and brings up new challenges – the interlocutor may not know us, may not understand our mandate, and may, in some instances, not accept our work.

The second trend is marked by an ever-expanding web of legal and other measures taken by States to deal with NSAGs designated as ‘terrorist’ and/or included on sanctions lists at the international, regional and domestic level. Without a doubt, States have a right and duty to protect the safety and wellbeing of their populations. However, it is by now recognized that the fight against NSAGs involved in terrorism and/or deemed to constitute a threat to international peace and security has in some instances had the effect of shrinking the space for humanitarian action. The designation of NSAGs as ‘terrorists’ or as ‘listed entities’ can also pose a risk to those who engage with such groups – even for humanitarian reasons – with potentially grave legal and other consequences. Unless impartial humanitarian action is excluded from the scope of anti-terrorism measures and sanctions regimes, the regular activities of the ICRC – and other humanitarian organizations – will risk serious legal and operational obstacles.

Humanitarian engagement with NSAGs who are parties to a NIAC is nothing new. It is an activity foreseen in the Geneva Conventions of 1949 and has been a known practice of the ICRC for much longer. It is a humanitarian necessity, and an indispensable path of action, that impartial humanitarian organizations must take to assist and protect all persons affected by armed conflict. Whether to enable detained government soldiers to communicate with their loved ones, provide food to populations in need, or distribute vaccines to persons outside the reach of State authorities – the humanitarian results of such engagement are tangible and should be supported.