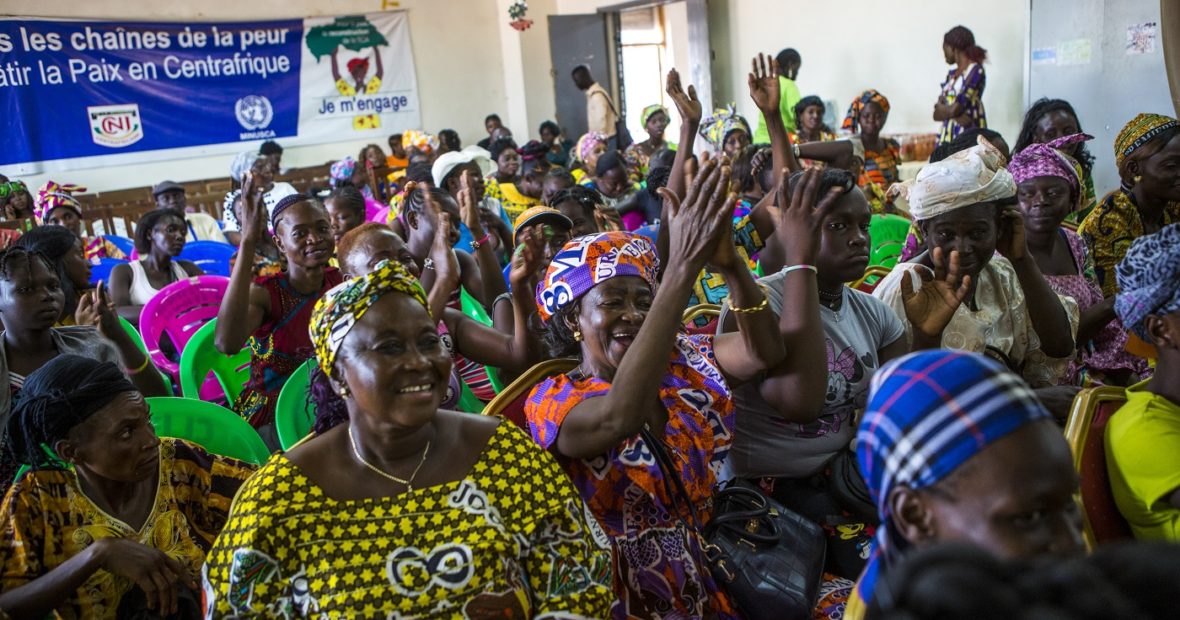 This blog seeks to explore the ongoing discourse in the humanitarian sector that portrays gender equality as a goal outside the scope of humanitarianism. It explores how emphasis on the cultural, social and political nature of gender has contributed to a perception of gender-transformative action as incompatible with humanitarian principles. It ultimately argues that challenging patriarchy is not only in line with, but also an essential component of, principled humanitarian action.

In recent decades, the issue of gender has attracted increasing attention from humanitarian actors. This has seen a growing focus on the specific needs and vulnerabilities of groups marginalised by predominant gender norms and historically overlooked by humanitarian actors. It has also seen the mainstreaming of gender as a tool to assess the gendered nature and impact of conflict, as well as the gendered implications of humanitarian programming. Finally, it has seen the emergence of Gender-Based Violence (GBV) as a humanitarian sub-sector. [1]  This emergent spotlight on gender issues has been accompanied by commitments to ‘combat structural and behavioural barriers to gender equality’ in humanitarian settings.

Despite these advances, it seems more needs to be done to challenge gender inequalities. This is reflected in the consistently low percentage of humanitarian funding allocated to programmes contributing to gender equality – only 4% of the total aid funding between 2015-2016, according to OECD. Unsurprisingly, the 2016 World Humanitarian Summit ‘shared frustration that greater progress on gender equality humanitarian programming had not been made yet’.

In this article, I borrow Cynthia Enloe’s definition of patriarchy, understood as ‘the structural and ideological system that perpetuates the privileging of [hegemonic] masculinit[ies]’.[2] Thus, it is a hegemonic system of power relations based on gender norms, which establish the expected roles of men and women. In this system, women and girls[3] have historically, and overwhelmingly, been oppressed, exploited or otherwise disadvantaged. So too have groups who do not conform with gender norms, the predominant binary approach to gender and sexuality, and/or heteronormative expectations. These include lesbian, gay, bisexual, transgender and intersex (LGBTI) populations, as well as certain groups of men and boys.[4]

Also central to this article is the concept of gender equality. While UN Women defines it as ‘equality between women and men’, I expand this definition to encompass equality between all people, regardless of their gender, their sexuality, and the degree to which they conform with gender norms and the patriarchal binary approach to gender and sexuality. In essence, gender equality emphasises the gendered aspects of inequality and the groups generally marginalised by patriarchy. Thus, the promotion of gender equality inevitably challenges patriarchy insofar as it fights against gender inequalities. The latter are enabled by the patriarchal system while also contributing to perpetuating it.

Humanitarian action focused on promoting gender equality can be characterised as gender-transformative. Examples of gender-transformative programming include women’s empowerment through livelihoods, for example in Syria, or the promotion of women’s participation in decision-making processes, as done by Oxfam in the Democratic Republic of the Congo. It can also involve activities specifically targeting men, such as raising awareness of the fact that sexual violence can also occur to men and boys, as done by the Refugee Law Project in Uganda.

As I have argued previously, gender-transformative action is essential to a resilience-focused humanitarianism, to the extent that it empowers groups marginalised by patriarchy to have a bigger role in local responses. Gender-transformative action can also be an answer to requests from local populations. As research by Oxfam reveals, local women’s rights actors in various countries have shown dissatisfaction with lack of recognition and lack of prioritisation of gender equality in humanitarian action.

Another good reason for challenging patriarchy lies in the fact that gender inequality underpins and intensifies risks and vulnerabilities in areas of key concern to humanitarian actors. These include, notably, gender-based violence, but also limited access, especially by women and girls, to education, healthcare, agricultural lands and water points, safe livelihoods opportunities and adequate shelter. In times of conflict, these gender inequalities can be exacerbated – which has been acknowledged by practitioners, donors and scholars.

Practitioners, donors and scholars also agree that conflict can create a window of opportunity for promoting gender equality, which can be supported by humanitarian actors. As Oxfam observes, while conflicts ‘create risks for women and can exacerbate inequalities, the collapse of political and social order can paradoxically create opportunities for change.’ Changes in the power dynamics in the household, the loosening up of the division of labour, and the strengthening of women civil society organizations can ‘provide opportunities for more fundamental issues to be addressed’.

A matter of principle

As Elisabeth Olivius observes, ‘[n]ot long ago, the promotion of gender equality was controversial in the UNHCR, as interventions in matters of culture were considered to be at odds with humanitarian principles’. The ICRC has also expressed similar positioning. Up until its 2011 edition, the organization’s Annual Reports included a general disclaimer that ‘in accordance with its principles of neutrality and impartiality, the ICRC does not claim to reform gender relations’.

Thus, the hesitation in addressing gendered consequences of conflict seems to be linked, to some extent,[5] to a perceived incompatibility between gender and humanitarian principles, especially neutrality. Nonetheless, I would argue that this perception is misguided.

Neutrality can be defined as ‘not tak[ing] sides in hostilities or engag[ing] at any time in controversies of a political, racial, religious or ideological nature’. As Jean Pictet explains, this principle is composed of military neutrality and ideological neutrality. Evidently, gender-transformative humanitarian action cannot be understood to be in violation of military neutrality, for the power struggle derived of unequal gender relations is not of a military nature. Nonetheless, gender-transformative action can be seen as a violation of ideological neutrality, as it seeks to address the inequalities created by an ‘ideological system’ – patriarchy.

This reasoning, however, overlooks the fact that patriarchy is not an ideological system underpinning armed conflict; rather, in most (if not all) societies patriarchal dynamics are at play before, during and after conflict. It further ignores that, humanitarian actors also operate in, and are influenced by the norms of, a patriarchal world. In such circumstances, without continuous, conscious efforts to challenge patriarchy, humanitarian action may, even inadvertently, contribute to perpetuating it. An example of this is the common depiction of women as ‘intrinsically weak and vulnerable’ in humanitarian messaging and practice.

Moreover, such a conceptualisation of neutrality is patriarchal in itself, for it is based on a male-centric understanding of the world, accidentally unaware or intentionally dismissive of gender inequalities that privilege hegemonic masculinities. As Lori Handrahan puts it, ‘[w]hile it can take a war for personal security to become an issue in most men’s lives, insecurity is all too common for women, irrespective of war. Female insecurity is so prevalent that it becomes invisible and accepted as the norm’. This can be said not only of women’s insecurity, but of other gender-based consequences of patriarchy as well, to both women and men.

Thus, attempting to be neutral vis-à-vis the existing gender relations in fact violates the principle of humanitarian neutrality. As Desmond Tutu famously said, ‘If you are neutral in situations of injustice, you have chosen the side of the oppressor’.

Humanity can be translated, inter alia, as an endeavour to ensure respect for the human being, including ‘[their] life, liberty and happiness’. However, the gender inequalities inherent in the prevailing patriarchal system are a constant obstacle to ensuring the respect of those whom the system seeks to marginalise. Therefore, the full application of the principle humanity not only allows for, but requires the promotion of gender equality, essential to the full respect for all human beings.

Impartiality is another fundamental principle widely accepted by humanitarian actors. As Pictet notes, one of its key components is the fundamental idea of non-discrimination. In this regard, gender-transformative action is essential to ensuring impartiality. This occurs because the provision of humanitarian aid to specific populations, notably women, can sometimes be hindered by gender inequalities. In such cases, humanitarian action actually depends on challenging patriarchy.

As Julie Mertus notes, in Afghanistan, Oxfam and Save the Children suspended selected activities to protest the Taliban’s edicts blocking equal participation of women and girls. Similarly Clifton and Gell emphasise that ‘with no access to women, Oxfam GB did not believe it could deliver humanitarian aid with impartiality’.

Humanitarian actors are inevitably a part of patriarchal dynamics. For this reason, refusing to challenge existing gender relations has the effect of violating the very principles this refusal intends to uphold. This positioning is not in line with the principle of neutrality, insofar as it contributes to maintaining prevailing (patriarchal) power structures, and has further consequences on the application of the principles of humanity and impartiality.

A call for discussion

The fact that gender equality is not in itself against humanitarian principles does not mean that we, humanitarians, do not have to be careful about how we promote it. Gender-transformative action can still have a negative impact on humanitarian access, or on the security of humanitarian workers, depending on how it is perceived by local populations. This has to be taken into consideration on a case-by-case basis.

It is also key to ensure that gender-transformative action is based on local perspectives of the very people marginalised by patriarchy and gender inequalities. Otherwise, we risk imposing our own perspectives and values on them.

[1] This progressive focus on gender was reflected in the publication of multiple policy and guidance documents, such as the UNHCR’s Policy on Refugee Women (1990), Guidelines on the Protection of Women (1991), Gender-Related Persecution Guidelines (2002) and Handbook for the Protection of Women and Girls (2008), and IASC’s Gender Handbook for Humanitarian Action (2006 and 2017) and Gender-Based Violence Guidelines (2005 and 2015), to name but a few. Most recently, it was also reflected the World Humanitarian Summit’s commitment to ensure that humanitarian programming is gender-responsive, which received the third highest number of endorsements.

[2] The acknowledgment of multiple forms of masculinity is essential to understanding how patriarchy can be damaging to certain groups of men. For this reason, I adapted Enloe’s definition by adding the qualifier ‘hegemonic’ and modifying the word ‘masculinity’ to its plural form.

[3] The use of the generalised terms ‘women’, ‘girls’, ‘men’ and ‘boys’ in this article is not meant to restrict specific effects of patriarchy to all, or only, women/girls/men/boys, but rather to emphasise how these groups are, in general, affected. These groups of individuals are not homogenous and are also impacted by other power dynamics, such as those of race and class. In this regard, see, e.g., Hugo Slim’s article in this blog, ‘Impartiality and Intersectionality’.

[4] As Srushti Mahamuni observes, ‘patriarchy is not only harmful to women but to men as well. While it oppresses women and restricts them to subjugated positions in society, it imposes unrealistic expectations on men about what it means to “be a man”’.

[5] Humanitarian principles are not the only obstacles, raised by humanitarian actors, to gender-transformative humanitarian programming. Other obstacles would include (i) the perception that gender equality goes against local cultures, and (ii) the relinquishment of gender equality to ‘gender experts’, as opposed to mainstreaming it across all sectors. However, these issues will not be addressed here, as that would require a more comprehensive analysis, incompatible with the format of this blog post. 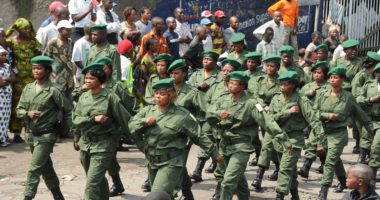 The uptake of gender considerations into military missions across the world has largely been uneven ...