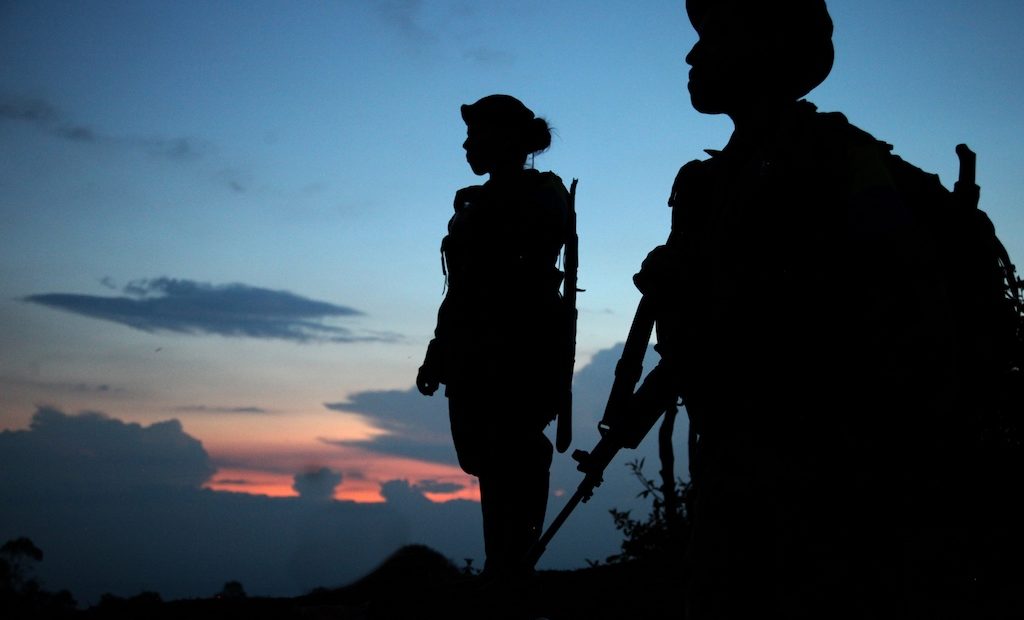 Today marks International Women’s Day, providing us with an opportunity to pause and reflect on a range of achievements by and for women. It is also a chance to stress the significant challenges we face as we continue to urge for meaningful change for women within large institutions. In the area of international humanitarian law (IHL) and current conflicts, the unacceptable humanitarian consequences of armed conflict impact differently upon women and men, and the ICRC will continue to highlight these impacts and deliver practical responses on the ground. However today we want to focus on an area that often doesn’t get the attention it deserves—the requirement of equal treatment of women in the military.

Contemporary armed conflicts include more women in fighting forces than ever before. Women now make up 17.9% of the military in Australia, 15.5% in France, 34% in Israel, 15% in the Uruguayan Army, 15.94% in the USA and 5.5% in South Korea. In non-State armed groups from South America, to Europe, to Africa, to Asia, female members have served in roles including commanders of battalions and heads of operations. And while women have played lynchpin roles in State armed forces throughout history, the last decade has seen gender-based restrictions on combat positions increasingly lifted such that women are more and more visible on the front line.[1] Female combat pilots can now join the air forces of China, India, and Japan. And, as of 2016, all combat roles in the Australian, British and U.S. militaries are open to women.

In light of the increasing number of women fighting in a diversifying range of roles in State forces, this blog will focus on rules of IHL governing the treatment of female combatants and will identify three corresponding planning implications for military medical services. More specifically, we focus on the State obligation to treat wounded and sick female members of the armed forces with ‘all consideration due to their sex’ (Art 12(4) GCI, Art 12(4) GCII). We look at what this means for contemporary State armed forces who not only have an increasing number of women within their ranks, but are also faced with the possibility that captured opposition may be female. We draw in particular from the ICRC’s 2016 Commentary on the First Geneva Convention.

Female fighters benefit from all of the general protection that IHL affords to any member of a party to a conflict. Crucially, these general protections must be applied without any adverse discrimination on the basis of sex: each of the Geneva Conventions and the Additional Protocols requires humane treatment ‘without any adverse distinction founded on sex’ (Art 12(2) GCI, Art 12(2) GCII, see also Common Art 3(1), Art 16 GCIII, Art 27(3) GCIV, Art 75(1) API, Art 4(1) APII).

In addition, certain IHL rules apply specifically to female members of armed forces—these stipulate certain differentiated treatment for men and women (see e.g., Art 25(4), 29(2), and 49(1) GCIII). To be clear, the articulation of women-specific rules shouldn’t be understood to imply that women have less resilience, agency or capacity within the armed forces. Rather, the Geneva Conventions and their Additional Protocols recognise that the principle of equality of protection requires favourable distinction based on specific needs (see here, para 1428 and 1430).

Most importantly, for our discussion here, is a short but powerful obligation that sets out this favourable distinction—Article 12(4) of the First Geneva Convention. This Article requires that States party to international armed conflicts treat wounded and sick female members of armed forces ‘with all consideration due to their sex’ (see also Art 12(4) GCII, Art 14(2) GCIII, Art 76(1) API).

What does this short line of treaty text mean in practice? How exactly can female members of the armed forces be treated with ‘all consideration’ due to their sex? The ICRC 2016 Commentary specifies that compliance with this obligation requires States to take into account ‘the distinct set of needs of and particular physical and psychological risks facing women, including those arising from social structures’ (para 1429) and identify responses specific to these needs (para 1430). Building on this, here we identify three categories of medical needs of female members of the armed forces and set out three practical measures by which States can comply with their Article 12(4) obligation: the availability of appropriate medical supplies, medical personnel training and the establishment of policies to overcome barriers to access.

Common female-specific medical conditions. Parties treating women with ‘all consideration due to their sex’ will need to identify female-specific medical needs. While the most common medical conditions experienced by male and female members of armed forces are largely similar,[2] women face unique but common health conditions including menstrual irregularities, urinary tract infections and vaginal infections. For example, Persian Gulf War and surface fleet literature indicated that gynaecological problems accounted for 20–25% of women’s visits to medical services of the armed forces. In addition, without the right preparation, basic needs such as urination and the changing of menstruation-related hygiene products can become medical risks for women working in austere (combat) environments.[3]

Pregnancy. Finally, pregnancy is not an uncommon occurrence among military personnel. For example, a U.S. Department of Defence survey indicated a rate of unplanned pregnancy among military women almost double that of the general population.[5] Maternity cases and expectant mothers are considered by IHL to be in need of medical assistance or care, such that they benefit from the protection of Article 12 (see here, para 1432). Accordingly, the specific needs of women who are pregnant—whether these are specific hygiene requirements, or pre- or post-natal care—must be included in State’s planning and analysis of their Article 12(4) obligation (see here, para 1434).

Treatment with all consideration due to their sex: Three practical implications

The ICRC 2016 Commentary on Article 12(4) provides that ‘treating female members of the armed forces with all consideration due to their sex involves ensuring that Parties have both the capacity and the wider understanding to meet the range of specific needs of women when wounded or sick’. In practice, this means that States need to be equipped with appropriate medical supplies, staffed with appropriate medical expertise, and prepared with adequate policies to address female-specific medical needs.

Appropriate medical supplies. First, specific medical supplies are required to meet the needs of women. This means that additions may need to be made to military pharmacies—this could include treatments for common gynaecologic infections, basic female hygiene items such as pads and tampons, or self-diagnostic kits for urinary tract and vaginal infections.[6] Standard medical supplies could furthermore be adjusted to include the World Health Organisation’s essential list for the treatment of victims of sexual violence—including syringes, needles, sterile swabs, speculums, blood tubes, pregnancy testing kits, emergency contraception and STI prophylaxis.

Medical personnel training. Second, with regard to the availability of appropriate medical expertise—generally speaking, medical providers in theatres of conflict may have different levels of women’s healthcare training.[7] More specifically, the further forward women serve on the battlefield, the more likely that their first available line of care will be at the level of combat medic, who may not be authorized or trained to treat common women’s health issues. In such circumstances, treating women with all consideration due to their sex involves taking measures to ensure that military medical services have the human resources and training to ensure a standardized level of care for both male and female patients.

Establishment of policies to overcome barriers to access. Third, States’ policies need to consider female-specific barriers to accessing adequate medical care. On this subject, the ICRC 2016 Commentary stipulates that ‘[k]nowledge of how social structures influence the situation should be taken into account in order to ensure that health care is fully accessible to both women and men’. For example, female combatants may face specific social barriers impeding their access to medical services, including the stigma associated with being femininely ‘weak’, [8] the under-recognition of medical issues that disproportionately affect women, or the possibility of having their needs disbelieved or disregarded.[9] Systemic approaches may be needed to reduce these barriers. For example, the U.S. military instituted a Women’s Health Task Force which has acted as a means to convene experts, make recommendations and share best practices across the military health service to ensure it is equipped to meet the medical needs of female members of the armed forces.

This obligation has global relevance, regardless of the fact that women are not present in all State armed forces. States with no or low numbers of women in their armed forces may nevertheless face a belligerent force with female personnel, and thus may capture women to whom they will owe the obligation of treatment with all consideration due to their sex. For States with women in their own armed forces, it is pertinent that these women benefit from the protection of Article 12(4) when they are in the power of their own forces as well as adversary forces(see para 1370). In short—women are fighting on today’s battlefields, so all States should be planning to comply with Article 12(4).

This obligation also has peacetime implications—international armed conflicts may not be the norm today, but this does not mean that the obligation in Article 12(4) is dormant. Of immediate relevance for the operation of military medical services, the ICRC’s 2016 Commentary observes that the Article 12(4) obligation requires planning and analysis of the military healthcare system, and—crucially—requires parties to ‘consider how the roles and patterns formed by the social, economic, cultural or political context and resulting in different statuses, needs and capacities among women and men of different ages and backgrounds could hamper the safe access to care of any one group’. Putting measures in place to ensure equal access takes time. And accordingly, in order to comply with Article 12(4) preparation is needed in peacetime.

As women move forward in State militaries both in numbers and in roles, there is concurrent recognition that they provide diversity of experience and expertise within what has traditionally been an extremely male dominated profession.

As Kath Stewart, a former Colonel in the Australian Armed Forces and current Delegate for Armed and Security Forces at the ICRC reflects:

During my career my gender has allowed me to gather information and knowledge of the operational environment by establishing relationships and speaking with local women who were unwilling to speak with my male colleagues. I brought this dimension—and also all my other skills and knowledge—to the military. I am a woman, yes, and I am also an engineer and a highly-trained soldier with operational and diplomatic experience. In operations, having people with many different skills makes military success more likely.

As militaries recognise this value, the requirement to provide female combatants with equal treatment is increasingly relevant. The ICRC aims to ensure that militaries are aware of associated practicalities in their pre-deployment planning and implement the corresponding requirements. Female members of armed forces must be treated equally—the update of the Commentaries to the Geneva Conventions has provided an opportunity to address this important, and often overlooked, area of international humanitarian law in greater detail.

[1] Combat is central to military activities and combat experience can be a pre-requisite for promotion to the highest ranks, so the lifting of restrictions on women serving in combat roles is significant. For an analysis of this significance, see Jennifer G. Mathers, “Women and State Military Forces,” in Women & Wars, Carol Cohn (ed.), Polity Press, Cambridge, 2013, pp. 124-145, atpp. 136-140.

[2] One U.S. military analysis of outpatient records from theater of combat between 2006 and 2012 indicated that the top five most common conditions that affect women are the same as those affecting men – see Anne L. Naclerio, ‘Medical Issues for Women Warriors on Deployment,’ in Elspeth Cameron Ritchie and Anne L. Naclerio (eds), Women at War, Oxford University Press, 2015, at pp. 49-77, p. 67.

[8] Gendered assumptions about a woman’s ability to perform her professional responsibilities have been shown to make women in military jobs be perceived as less competent even where objective performance is equal to male colleagues. See Jennifer G. Mathers, Women and State Military Forces, in Women & Wars, Carol Cohn (ed.), 2013, pp. 124-145,at pp.140-144.