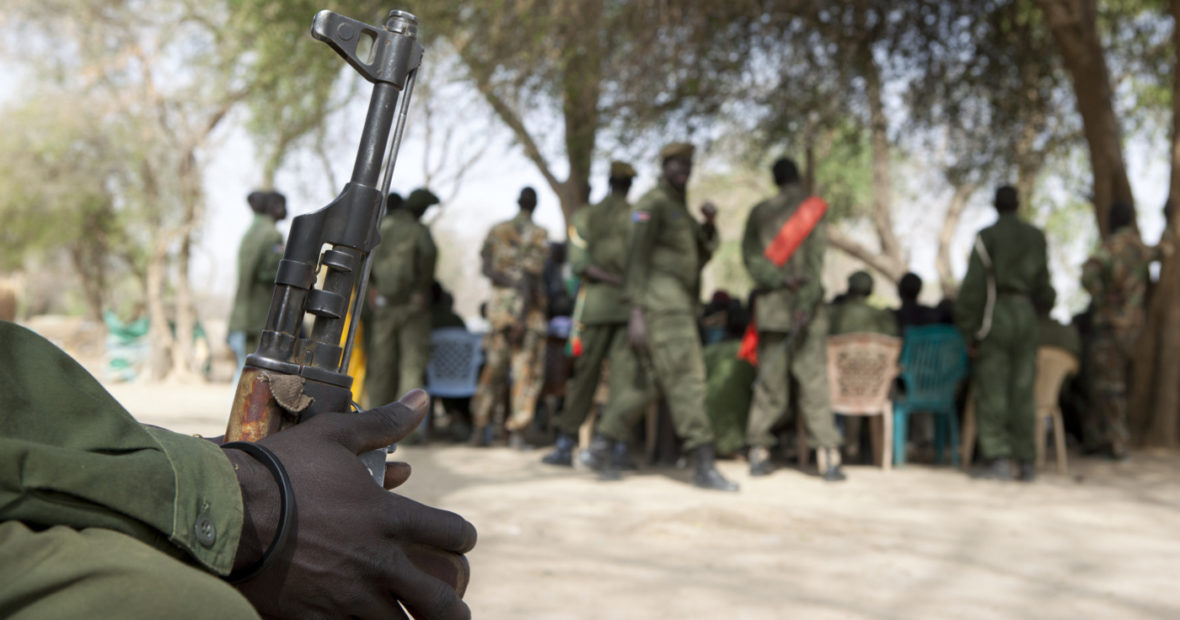 The majority of armed conflicts being fought on the African continent are classified as non-international armed conflicts, and are characterized by the presence of non-state armed groups as well as multinational forces. This raises specific questions on how to ensure greater respect for international humanitarian law (IHL) in the region.

In recent times Africa has been witness to instances of grave violations of the law in the course of armed conflicts fought on its soil. Many of these are characterized by the presence of non-state armed groups and multinational forces in volatile contexts. A reflection on strategies on generating respect for IHL in Africa should necessarily consider such actors in addition to States.

On 10 August 2016, the Pretoria Regional Delegation of the ICRC convened a panel discussion in Johannesburg entitled “Generating respect for international humanitarian law: an African perspective”. The panel brought together experts drawn from government, multinational forces, national armed forces and academia. The panel discussion was held within the context of the 77th biennial International Law Association Conference and forms part of the ICRC’s Conference Cycle on Generating respect for the law.

Setting the terms of the debate, ICRC Regional Legal Advisor Sarah Swart stated that “in view of the perception that the rules of IHL are increasingly being violated, and in the absence of effective enforcement mechanisms”, there is a pressing need to find ways to ensure greater compliance with, and effective implementation of, IHL, both in Africa and beyond.

First, the role of the UN is still predominant – as far as UN peacekeeping missions are concerned – but is far from being exclusive when it is about committing multinational forces. Second, the hybrid nature of multinational forces – which means they do not report to a single organization – is an increasing reality. […] Another aspect is the ‘co-location’ or ‘co-activity’ of different forces operating in the same country but not necessarily within the same mandate and for the same purpose. [Next] is the increasing asymmetric nature of the threat, which has serious consequences on the ability of international organizations to generate and sustain adequate forces, provide them with relevant capacities and enable them to demonstrate operational efficiency. Very often, we see also a volatility of the context, which can place a multinational force in a sudden new environment, as it was shown by the events in Juba, South Sudan.

The question of the applicability and application of IHL to multinational forces is not a new topic for the ICRC. After decades of research and much experience operating in proximity with multinational forces, many questions are under discussion between States and the ICRC. The main obstacles remain securing admission by the relevant international organizations and the troop-contributing countries (TCCs) that they are bound by IHL when engaged in armed conflict, and ensuring that there is a common understanding of the applicable legal framework.

Shifting the focus from the humanitarian to the military operational perspective, what challenges need to be tackled? In Maj. Gen. Baillaud’s view,

clarity in mandates is extremely important: this implies defining priorities, approaches and processes that can be translated in clear guidance at mission and component levels […]. It would also be important to consider what can be done to develop a preventive approach instead of just reporting misbehaviours, in particular in the domains of pre-deployment and mission-level training. Planning also constitutes an important phase in this respect. It would also be strategic to assess the relevance and adequacy of protection mechanisms. The key is to put in place adequate structures, and recruit competent experts to support leadership in the mission and military police components, in exercising their challenging responsibility.

In short, it is crucial “to develop mechanisms to ensure that all actors involved are taking their respective responsibilities and that proper oversight is exercised”.

Art. 1 Common: the obligation to respect and ensure respect

During the panel discussion Colonel André Retief (South African National Defence Force, International Institute of Humanitarian Law in San Remo), clarified the full scope of CA 1: the obligation to respect and to ensure respect for the Geneva Conventions.

The problem of IHL violations will not be solved by creating more law: the existing rules of IHL are sufficient and adapted to the situations they are meant to regulate. Rather, compliance with existing rules seems to be the main hurdle to limiting the effects of armed conflict and adequately protecting persons who are not or are no longer participating in hostilities. This is why underscoring the preventive component of the legal obligation established by art. 1 common to the Geneva Conventions (CA 1) is of paramount importance. The obligation to ensure respect encompasses the duty to prevent breaches of IHL from occurring in the first place.

CA 1 epitomizes the obligations of States to avoid IHL violations taking place in the future. It does so by creating a framework whereby States not party to a particular armed conflict must use every means at their disposal to ensure that the belligerents comply with the Geneva Conventions and the First Additional Protocol, and arguably with the whole body of IHL. CA 1 does not only constitute a basis for action: it also imposes upon third States an international legal obligation to ensure respect in all circumstances. As said by Colonel Retief, this obligation applies in international and non-international armed conflicts. CA 1 takes the form of an obligation of due diligence, which implies that States must make every lawful effort in their power to prevent IHL violations, regardless of whether they attain the desired result or not.

Even more important in today’s conflicts is the duty of third States, clearly included in CA 1, not to encourage persons or groups engaged in an armed conflict to act in violation of the Geneva Conventions, nor to knowingly aid or assist in the perpetration of such violations. It further includes an obligation to put an end to ongoing IHL violations.

These questions on the application of CA 1 may arise where the High Contracting Parties engage in operations conducted by the forces of two or more States within the framework, or under the command and control, of an international or regional organization such as the UN or the African Union (AU).

In view of the ongoing non-international armed conflicts on the African continent and developments in the bodies of law applicable to such conflicts, the AU has an increasing role to play. Together with the ICRC, the AU and its predecessor, the Organization of African Unity (OAU), have done much to promote the rules of IHL. Examples of this cooperation include raising awareness of the humanitarian rules among armed forces, training contingents deployed by the main organ of the OAU, seminars for diplomats and symposiums on specific subjects. More recently a number of recommendations on various issues related to IHL have also been adopted at the OAU and AU conferences and at previous ICRC/AU joint seminars, some of which also ended up in resolutions of the International Conference of the Red Cross and Red Crescent.

However, much more remains to be done. There is a need to explore what more the AU could do to further increase respect for IHL in non-international armed conflicts. This could in turn energize exchanges among other continental initiatives.

The role of national courts and IHL committees

When one looks at national courts dealing with IHL, some African States have made incredible steps to improve compliance with the law. Sharon Weill, Professor at Science Po Paris, shared some of the new cases and initiatives undertaken in African States while stressing possible improvements and remaining concerns.

Respect for IHL comes in many forms, one of which is through the practice of domestic courts in addressing IHL-related cases. Sharon analysed the structural conditions (i.e. “a legislation that endorses IHL and which actually corresponds to an obligation deriving from the Geneva Conventions”) of some African States which are necessary for the effective enforcement of IHL by domestic courts. She argued that even if the structural conditions are fulfilled, this will not necessarily result in the normative application of the law.

Using the example of Côte d’Ivoire, Sharon showed how “a lack of attention on the implementation of legislation with respect to other laws can for example create concurrent jurisdictions between military courts and civil courts”. Care must be taken that international law is harmonized with local laws.

At a more functional level, the ICJ’s Belgium v. Senegal ‘Hissène Habrè case’ is of particular significance. The case was dealt with by Senegal, not Belgium: this generated pride among the population, together with a sense of ownership and a perception that the law served its purpose.

Structural and functional conditions also need to be taken into consideration in the training of authorities, including of judges. As Weill said, the impartiality and independence of judges is an important factor and indirect legislation can have an interference on these principles. “Amnesties can constitute in certain cases an interference undermining the independence of judges.”

Ultimately, courts are only part of the answer in generating respect for the law. They play their role after conflicts start, while it is often the population and the media, says Weill, who have a strong preventive part to play in peace time.

In this sense, national IHL committees are complementary to national courts and also play an influential role in generating respect for the law. The ICRC encourages the creation of such bodies because they have proven useful in assisting States to fulfil their obligations under the Geneva Conventions of 1949 and the Additional Protocols, as well as other IHL instruments.

The Geneva Conventions do not require the creation of such committees. The decision to do so is solely the prerogative of the government concerned. Nor is there a standard format or structure. As a result, National Committees across different countries vary in composition and in the way they work.

During the panel, Col. (Prof.) Dan Kuwali (Malawi Defence Force, University of Pretoria) argued that a national committee composed of external, influential experts make these mechanisms particularly effective. Malawi in this regard provides a good example: one of the activities of the National Committee has been supporting the implementation legislation with respect to the Biological weapons convention.

Within this framework, it was suggested that National Committees within the same geographical region would benefit from peer-to-peer cooperation, to share their expertise to enable a free exchange of experience and knowledge.

By providing an African perspective to generating respect for IHL, the Johannesburg panel discussion provided clear answers on specific challenges in the region.

Given the prevalence of multinational forces in African armed conflicts, relevant international organizations and TCCs must recognize that they are bound by IHL when engaging in armed conflict and understand the applicable legal framework. At the operational level, steps can be taken to ensure greater compliance with the law, such as: clarity in mandates, a preventive approach to violations, the assessment of existing compliance mechanisms, or the development of new ones that ensure all actors respect their obligations and are placed under adequate oversight.

On the part of States, more attention could be paid to the obligation established by CA 1 to respect and to ensure respect for the Geneva Conventions. In particular, there could be more room to explore how Member States of the AU could ensure respect for IHL in non-international armed conflict. In this respect, national courts and IHL committees are two effective instruments for ensuring compliance with the law.

All in all, it is the responsibility of governments and international organizations alike to prevent and respond to violations of IHL, and to protect against their grave humanitarian consequences.