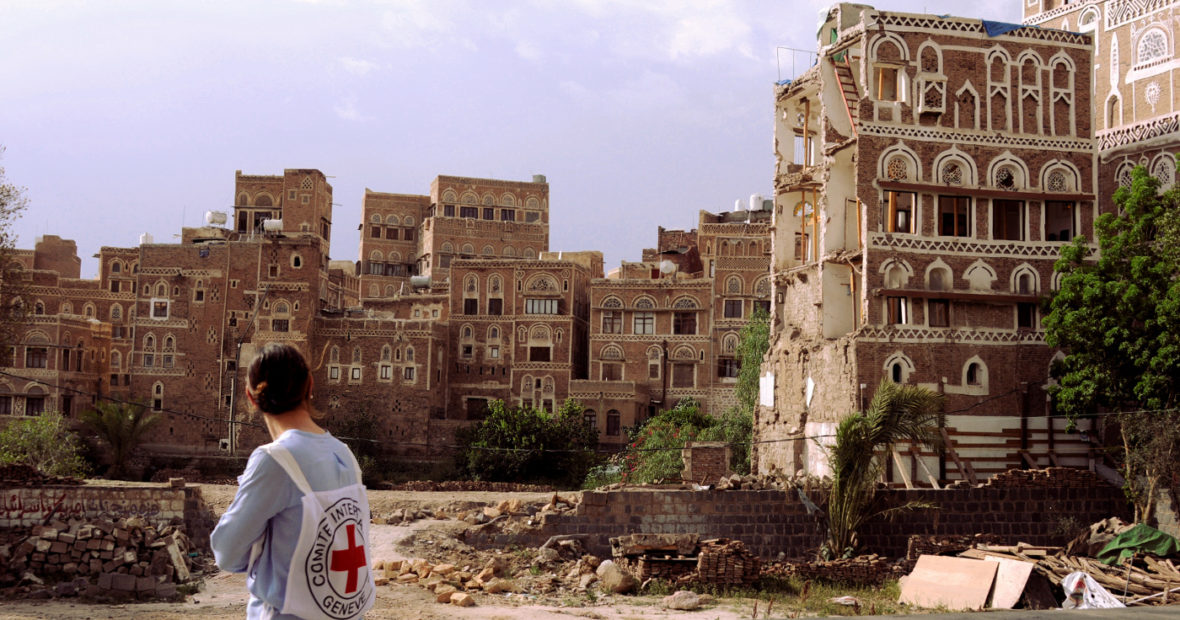 After intensive negotiations in Surabaya, Indonesia, the latest draft (.pdf) of the New Urban Agenda now gives respect for international humanitarian law and support to urban services in armed conflict their rightful place.

The New Urban Agenda, which will shape global policies on cities and urban areas for the 20 years to come, is set to be adopted at the UN Conference on Housing and Sustainable Urban Development (Habitat III) taking place in Quito in October this year.

Dr Hugo Slim, Head of Policy, led the ICRC delegation to the Third Session of the Preparatory Committee (Prepcom 3) for Habitat III, held in July in Surabaya, Indonesia. The ICRC joined the International Federation of Red Cross and Red Crescent Societies to ensure that the humanitarian needs of populations affected by urban humanitarian crises, including armed conflict and violence and natural disasters, were recognized.

In delivering ICRC’s statement to the plenary, Slim reiterated the organization’s three main recommendations to Habitat III (.pdf) and highlighted how “Armed conflict and violence are major causes of development reversals in many towns, cities and informal settlements. Prospects for sustainable development in these urban areas are being pushed back by decades.”

In the latest Habitat III text, negotiating States recognize that “humanitarian impacts”, among other challenges, “are increasingly concentrated in cities” (par. 2). These impacts not only include massive loss of lives and injuries, but also damage to critical infrastructures such as hospitals and water and electricity supply networks. If States and armed groups upheld “full respect for international humanitarian law” (par. 28) – including the principles of distinction between civilians and combatants and the prohibition against indiscriminate attacks, of proportionality between civilian harm and military advantage, and of precautions in attack and defence – some of the human costs of urban warfare could be avoided.

Yet the harm does not end with the blast, which often triggers a chain of longer-term consequences for civilians caught in urban warfare. Some experience trauma, long-term disabilities, loss of housing and of livelihood and many struggle to access essential services including education, health care, water, sewerage and waste management. As a result, the casualty toll keeps rising as diseases spread, as patients die in hospital and thousands more are deprived of water. This is especially real in protracted conflict, where city dwellers must cope with sustained fighting and shelling, sometimes over several years. In themselves, these impacts are a major cause of displacement as people flee to stay alive, increasing the flow of IDPs and refugees.

This is why the ICRC welcomes the New Urban Agenda’s acknowledgement of “the need for governments and civil society to further support resilient services during armed conflicts.” (par. 28) Also encouraging is the States’ pledge to generate “investments in communities that are most vulnerable to disasters [and] affected by recurrent and protracted crises.” (par. 27)

While negotiating parties addressed many of the ICRC’s concerns in Surabaya, more could still be done to ensure millions of people living in urban conflict and violence are included under the New Urban Agenda. As Slim recently wrote, “we would be even more pleased to see more specific recognition of the policies needed to address the challenge of safer access to health and education services in towns and cities affected by chronic urban violence.”

The delegation will continue to highlight these concerns at the upcoming informal talks which will take place in New York on 7-9 September.

The ICRC, a neutral and impartial humanitarian organization whose largest operations are in urban areas, is directly concerned by the Habitat III process. Day after day, in some 80 countries and cities like Gaza, Goma, Donetsk, Sana’a and Aleppo, it witnesses the plight of civilians whose lives, safety and dignity are threatened by violence and conflict. It witnesses how protracted armed conflicts have lasting cumulative impacts and seriously disrupt complex webs of infrastructures and services on which people depend for their survival.

Its policy recommendations to Habitat III are rooted in extensive operational knowledge and expertise in some of the world’s most unforgiving urban crises. These operations have only grown since Habitat II in 1996. The ICRC now invests about 60% of its infrastructure budget in urban areas, mostly on supporting water-supply networks. In Syria alone, it maintains essential water, waste-management and energy infrastructure and services for 15.8 million people.

The ICRC’s strong urban focus means it will continue following these negotiations with utmost interest. It remains seriously engaged in the Habitat III process and will be present in Quito. It stands ready to deliver its distinct expertise in the urban space – both operationally and in policy.