The new quarterly IHL Bibliography is out! As usual, it presents references to English and French publications on IHL based on books and articles available at the ICRC Library. Once again, the ICRC librarians highlighted some noteworthy documents:

Animals and the law of armed conflict

Marco Roscini’s article sheds light on a subject that has rarely been dealt with in the academic literature. So much so, in fact, that we weren’t sure in which category of the bibliography to place it. Marco Roscini points out that the current legal framework categorizes them as “property” or “objects”, but the “Protection of objects” category does not seem appropriate given the increasing awareness of animal welfare and emerging animal rights theories. This comprehensive study identifies important gaps in the law of armed conflict and calls for a more animal friendly conception of this body of law.

This article also touches upon a subject that is overlooked in the literature : what kind of compensation can (and should) be offered for the lawful harms that occur during armed conflict? While a lot has been written about compensation for deaths that incur from violations of international humanitarian law, there is currently no requirement for compensation or even responsibility-taking in case of incidental loss of civilian life when the principles of IHL are respected – what Lesley Wexler and Jennifer K. Robbenmolt term “lawful but awful” deaths.

The accountability of armed groups under human rights law 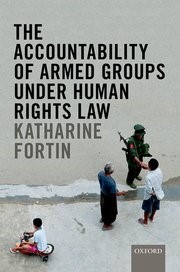 Katharine Fortin, who created the blog “Armed groups and international law”, was initially motivated to write this book because of the lack of clarity regarding the circumstances in which armed groups may be bound by human rights law. Indeed she notes that although the practice of holding armed groups accountable under human rights law remains controversial as a matter of law, in practice statements from Commissions of Inquiry and United Nations Special Rapporteurs holding armed groups to account under this body of law have become relatively commonplace. Her thorough analysis of the legal personality of armed groups takes into account both international humanitarian law and international criminal law.