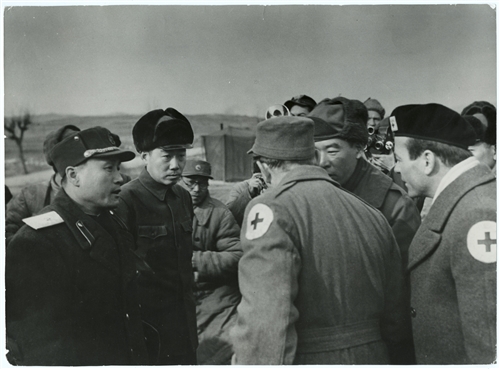 As the first major armed conflict since the revision of the Geneva Conventions in 1949, the Korean War, which broke out on 25 June 1950 with the invasion of the Republic of Korea (RoK) by troops from the Democratic People’s Republic of Korea (DPRK), is an important milestone in the history of international humanitarian law and the International Committee of the Red Cross (ICRC). Indeed, a year before, States had agreed on the Third Geneva Convention relative to the Treatment of Prisoners of War, defining humanitarian protections for prisoners of war (POWs) through a set of norms ensuring their humane treatment and proper care as well as safety in detention. A critical aspect of the Third Geneva Convention was to grant the ICRC and other impartial humanitarian organizations the right to offer their humanitarian services to POWs, including—but not limited to—relief shipments, visits, and inspections of the conditions of detention. The Convention also planned for the ICRC to set up an information agency to collect and transmit information about POWs to their country of origin or the Power on which they depended. 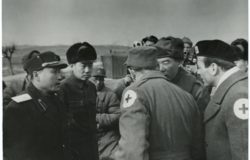 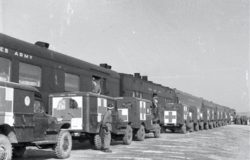 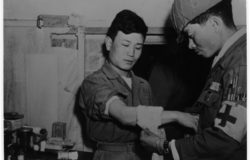 The ICRC immediately offered its services to both parties as conflict broke out on the Korean peninsula. A day after the outbreak of the war, on 26 June, Paul Ruegger, the President of the ICRC at the time, sent two identical telegrams[2] offering the ICRC’s services to both the governments of the DPRK and RoK and – although neither had ratified them by that time – urging both parties to comply with the humanitarian principles enshrined in the Geneva Conventions, especially Common Article 3. The organization did not receive a response from the Democratic People’s Republic of Korea and continued, unsuccessfully, to press for access to the DPRK all throughout the conflict.

International Committee Redcross [sic] Geneva, founded 1863, neutral and non-political institution composed exclusively Swiss citizens and whose humanitarian intermediary is provided for in cases international or civil war and internal disturbances, wishes assure you at your disposal to accomplish according means available traditional tasks in existing situation Korea (…) In our opinion fact that Korea not party or signatory these international agreements signed by sixty one states should not prevent de facto application humanitarian principles protecting war victims contained in said Conventions.

Telegrams dated 26 June 1950 from the ICRC to the ministers of foreign affairs of the DPRK and RoK, respectively

Following this telegram and in a symbolically charged gesture, Republic of Korea President Syngman Rhee publicly signed Article 3 common to the 1949 Conventions and announced that RoK forces would henceforth comply with the provisions of the 1949 Geneva Prisoner of War Convention. The Democratic People’s Republic of Korea’s minister of foreign affairs insisted, in a message addressed to the UN Secretary-General, that DPRK armed forces strictly abided by the rules set in the Third Geneva Convention and would continue to do so.

Despite assurances from both parties, the ICRC faced numerous challenges in its effort to provide humanitarian assistance to prisoners of war on the Korean peninsula. Most notably, ICRC’s neutrality was questioned, and it was denied access to POWs camps in the DPRK as the organization was perceived to be “western” and “capitalist.”[3] Unable to fully enact its mandate, the ICRC had to limit its activities to relief provision in the south, mainly to prisoners of war.

Conceived as an entry point to the ICRC’s Library and Archives’ rich collections, this page aims to provide an overview as comprehensive as possible of the main public documentary resources available on the activities of the ICRC during the Korean War[4].

As general reports on the activities of the International Committee of the Red Cross, these four volumes contain information on ICRC action during the Korean war.

The first and second volumes are both divided into two parts, the second of which details various relief actions in – at the time – new conflicts. Both first and second general reports contain only brief information on the Korean war while the second and third reports on the year 1952 and 1953 go into more details.

The 1952 ICRC report is composed of three sections. A chapter in the second part focuses on the Korean war while the rest of the report covers various ICRC activities – such as assistance to the wounded and sick of the armed forces, prisoners of war, civilian internees[5] and civilian populations – in different contexts as well as general IHL developments.

Neutrality and accusations during the Korean War

In a bipolar era defined by deep ideological and political divisions, the ICRC’s neutral and impartial nature was not recognized by all, sometimes leading to virulent campaigns of disinformation in the press. It ultimately resulted in the ICRC’s inability to extend its protection to all affected by the violent armed conflict taking place on the Korean peninsula.

From the first day of the war, the ICRC tried in vain to engage in dialogue with the government of the Democratic People’s Republic of Korea. Due to the absence of direct communication channels, ICRC delegates frequently met with Chinese government officials to relay messages to the DPRK, secure their support and, should all alternatives fail, convince the Chinese National Red Cross society to act on the ICRC’s behalf, circumstances permitting, in inquiring about missing combatants and civilians as well as delivering mail and medical supplies. ICRC President Ruegger personally travelled to China in March 1951 on an ICRC plane carrying more than a ton of medicines, hoping to eventually deliver them to the DPRK. The plane was stalled in Hong Kong as the authorization never came. The Chinese Red Cross informed the ICRC that it would not carry out the delivery of the medicines until the ICRC had reached an agreement with the DPRK Red Cross. A month later and despite oral assurances to the contrary, the Chinese Red Cross wrote a letter to the ICRC claiming that it had never agreed to act on its behalf and that the ICRC would need to make agreements directly with the relevant authorities in Pyongyang should they wish to work in the Democratic People’s Republic of Korea.

Despite its best efforts, the ICRC was never able to carry out its mandate in the DPRK during the war.

Additional documents from the XVIIIth International Conference of the Red Cross (1952):

An additional joint report of the ICRC and the League of Red Cross societies on action taken on the resolutions of the XVIIIth International Conference details steps taken by the ICRC to ensure access to prisoners of war in Korea and includes remarks on assistance to the civilian population of Korea. The joint report reiterates the importance of allowing the ICRC access to POWs camps and notes that again, on 24 November 1952, the International Committee addressed a telegram to the governments of the RoK and DPRK as well as to the Government of the United States — in its capacity as leader of the United Nations Command, the multinational force supporting the RoK government— to remind them of their engagements and renew the ICRC’s offer of services. 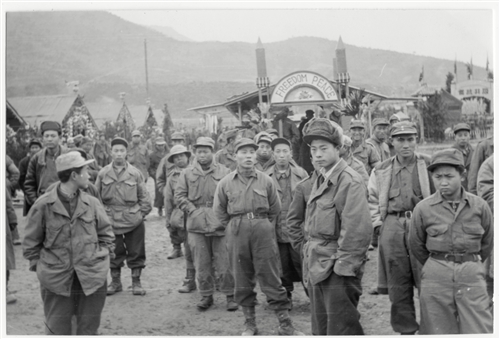 The 1953 Report on the work of the International Committee of the Red Cross, fourth and last of this list, is more or less organized like the 1952 report. The first part includes general information on ICRC activities and the second part deals with various operational contexts, among which the Korean War. The last part reviews developments in humanitarian law, relations with the Movement and international institutions and compiles general publications and information.

Digitized and available for consultation online, the 1950–1953 editions of the Review comprise many articles on the ICRC’s activities during the war, from its visits to prisoner camps to relief actions for war refugees. The Review also includes reports on the Koje-do prisoner camp known for episodes of deadly violence in 1952. 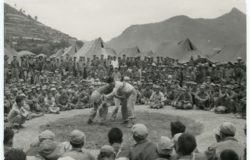 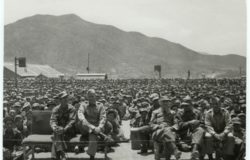 From news of POWs to ICRC public statements concerning its action in Korea, the digitized ICRC News Releases are all available for consultation online.

Third volume in a series of five dedicated to the history of the ICRC, this book traces the work of the ICRC in the decade following the end of World War II. The chapter focusing on the Korean War contains a historical account of the conflict leading up to the Kaesong and Panmunjom armistice negotiations. Furthermore, it recounts the numerous attempts made by the ICRC to secure proper accreditation for delegates and access to all people affected by the conflict, going into details about the unsuccessful communication attempts with the DPRK and negotiations with China and the USSR.

A legal limit to ICRC’s action in Korea

The United Nations Command[6] recognized the competence of the ICRC within the scope provided by the Third Geneva Convention only. Consequently, despite being allowed to visit some civilian prisons, the ICRC was not authorized to bring relief of any sort. Indeed, all aid to civilians was required to go through the United Nations Civil Assistance Command for Korea (UNCACK), precluding ICRC involvement. Although civilian assistance was limited in scale, the ICRC managed to deliver 65’000 Swiss francs worth of medical supply to UNCACK and to ascertain through visits that these supplies had reached and were being used to treat detainees in prisons. Furthermore, as all relief operations in RoK were to be coordinated by the United Nations, pass through the UN “pool” in Tokyo and be distributed by UNCACK, the ICRC was not able to provide relief to the South Korean civilian population until 1953 when, after intense negotiations, it could launch a small relief operation. As for the DPRK, despite its numerous pleas – none of which elicited a response from the authorities – the ICRC was not able to carry out relief actions at all.

[4] All the publications presented here are available for consultation in the ICRC Library. Some have also been digitized and are available online in full text (see the links provided for more details). Archival sources can be consulted upon appointment at the institution’s headquarters in Geneva; see the service’s page on icrc.org for more information. This page provides links to the photos and films available online on the ICRC audiovisual archives portal. Questions and suggestions on how to improve this page can be sent at library@icrc.org.

[6] The United Nations’ Command (UNC) was a multinational military force established following the UN Security Council’s resolution 84. Following the recognition by the UNSC that the invasion of the RoK by the DPKR constituted a breach of peace, resolution 84 called for UN member States to make their forces available for military assistance to the RoK under an international unified command headed by the United States.