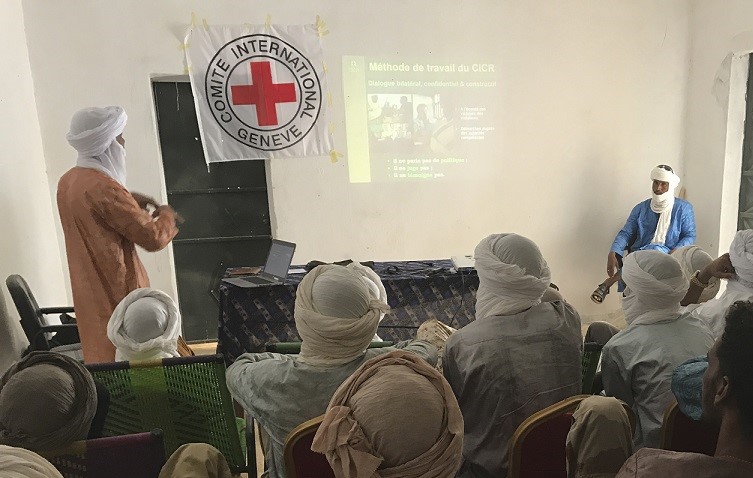 In line with its mandate, the ICRC engages with all parties to an armed conflict, including non-State armed groups. The ICRC has a long history of confidential dialogue with armed groups that has achieved tangible results. However, engagement has become increasingly complex. Accordingly, the ICRC undertakes an annual exercise to assess its current relationships with armed groups in order to both improve its engagement strategies and to determine trends that can impact future engagement.

In this post, ICRC Adviser Matthew Bamber-Zryd discusses some of the findings from this year’s exercise, during which time the ICRC had contact with two-thirds of the 524 armed groups that are of humanitarian concern. The ICRC’s success in engaging an armed group is influenced by a group’s structure, the region in which it operates and the extent of its territorial control. However, the ICRC continues to face significant obstacles to such dialogue, emanating from both armed groups and States.

The ICRC engages with all parties to a conflict in order to access populations in need that are living in areas controlled by all parties, including non-State armed groups. As a result, the ICRC has a long history of confidential engagement with armed groups that has enabled tangible results. Engaging with armed groups is a matter of humanitarian necessity and is indispensable if the ICRC is to carry out its humanitarian mandate and activities aimed at alleviating and preventing the suffering of persons living in areas controlled by armed groups.[1]

Engagement with armed groups is necessary for at least four reasons. First, engagement is a precondition for the ICRC’s safe access to populations affected by armed conflict or other situations of violence. Second, engagement is essential to ensuring that an armed group understands and accepts the ICRC as an independent, neutral and impartial humanitarian organization. Third, engagement is a prerequisite for promoting international humanitarian law (IHL) and other relevant legal frameworks as a means of ensuring respect for the law and thus preventing and alleviating the suffering of the victims. Finally, the ICRC is explicitly mentioned in Article 3, common to the 1949 Geneva Conventions, as an example of an organization that may offer its services to the parties to a non-international armed conflict, including non-State armed groups (NSAGs).

The armed group environment can change quickly; groups can fragment, merge, gain and lose territory rapidly. In order to serve its humanitarian mandate, each year the ICRC conducts an internal survey of armed groups through its delegations.[2] This information is used to monitor ICRC levels of contact with armed groups, identify trends in the structure and behaviour of armed groups, their interaction with populations, and assess opportunities for improved ICRC engagement.

Number of armed groups in 2022

In order to understand and meet the humanitarian needs of people living under the control of armed groups, the ICRC collects operational information on a group’s control over territory and people, its structure, the services it provides and an armed group’s relationship with civilians. This information highlights the significant variation among the 524 armed groups of humanitarian concern. Groups range from criminal organizations to armed groups that may be called de facto authorities. The ICRC needs to understand this variation among armed groups in order to develop better access to armed groups and engage such groups on the protection of people under their control.

These figures highlight the extent of armed group territorial control and the global scale of the population living under armed group control. Persons living under armed group territorial control face complex vulnerabilities and specific risks. Despite some service provision by armed groups, the needs of the population in areas controlled by many armed groups are often not fully met. Therefore access, engagement and dialogue with groups on a range of legal and protection issues, such as the protection of detainees, the restoration of family contacts, and more broadly the treatment of populations in accordance with international law and standards, are essential for the ICRC to understand and meet the humanitarian needs of this population.

ICRC dialogue with armed groups in 2022

Establishing a dialogue with an armed group is a complex endeavour with significant obstacles. However, in 2022, the ICRC had contact with approximately two-thirds of all armed groups of humanitarian concern (67%). The content of this dialogue can vary from operational dialogue, which is focused on negotiating access and security guarantees, to raising humanitarian concerns with armed groups to protect individuals affected by armed conflicts and other situations of violence and work towards these groups’ compliance with international humanitarian law or other norms and standards, as applicable.

Building on the ICRC’s pioneering work on understanding the sources of influence on armed groups’ behaviour, the ICRC has identified factors that impact our ability to successfully engage a group in dialogue. Relevant factors include the region in which an armed group operates, its structure, the extent to which a group controls territory and the relationship between an armed group and its population. In general, the ICRC has more frequent and direct dialogue with armed groups that are parties to armed conflict, community-embedded or have controlled territory for a period of four years or more. This confirms the crucial importance of the physical presence of the ICRC and its proximity to affected populations in these areas.

In conclusion, the 2022 exercise has shown that the ICRC has maintained significant levels of engagement and dialogue with many of the armed groups of humanitarian concern. However, it has also highlighted the myriad challenges that the ICRC face around access to armed groups, which can impact the ability of the ICRC to carry out its humanitarian mandate and activities aimed at alleviating and preventing the suffering of persons living in areas controlled by armed groups.

Editor’s note: In April 2023, the ICRC will be launching two sets of guidance to NSAGs, one on ‘Detention by Non-State Armed Groups’ and one on ‘Reducing Civilian Harm in Urban Warfare: A Handbook for Armed Groups’. Both sets of guidance have been derived from engagement with and analysis of NSAG practice related to these two issues and they include operational measures and substantive proposals to NSAGs on the implementation of some of the most fundamental IHL rules.

[1] In the ICRC’s usage, the generic term ‘armed group’ denotes a group that is not a State but has the capacity to cause violence that is of humanitarian concern, includes those groups that are NSAGs, as they qualify as parties to a NIAC.

[2] This post discusses some key findings from the 2022 survey on the ICRC’s engagement with armed groups. This information reflects the priorities and concerns of our delegations and, as such, is an assessment for primarily operational purposes and not a scientific study. Each year, there are some shifts in numbers that reflect both external armed conflict-related changes, as well as changes in the ICRC’s operational priorities and improvements in the methodology.