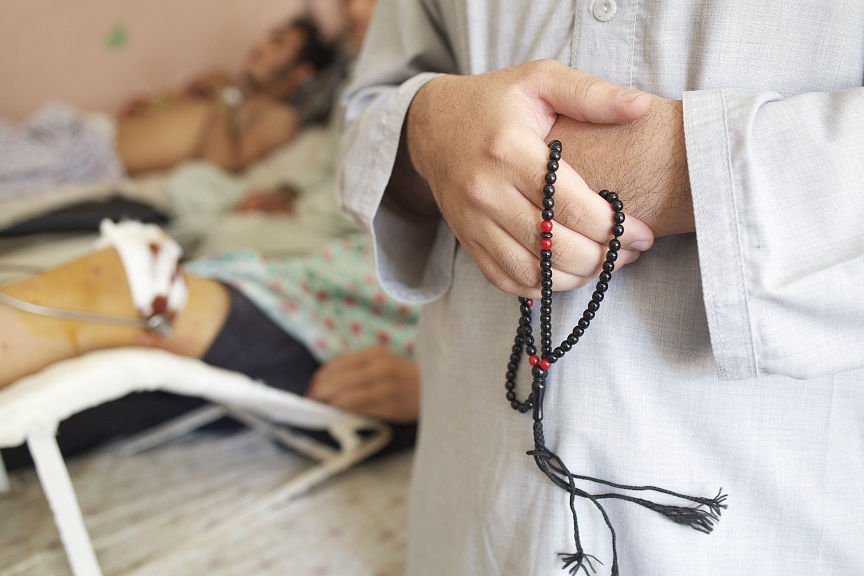 Against a backdrop of decades of conflict and crisis, Afghanistan’s regime change in August 2021 once again propelled the need for humanitarian assistance to the forefront. Not only have needs spiked, but various sanctions mean that some vital assistance is no longer administered as needed. Further complicating the situation, the country’s complex ethnographic, cultural and religious landscape lays a fertile ground for discrimination in how assistance is distributed.

In this post, Ioanna Voudouri, ICRC’s Operational Legal Coordinator, and Ezat Gul and Yari Yar Mohammad, National Legal Advisers, write from Kabul on how international and Islamic law address these risks, with the aim of eliminating obstacles for humanitarian assistance so it can reach the people who need it.

Those who need assistance should receive it. On the surface, there is little space to disagree with this maxim. Yet once uttered, the disclaimers, terms and conditions begin to stream in: Yes, but not all those who need it are ‘innocent’. Yes, but if we try to help these people, someone else will benefit from it. Yes, but this group does not deserve it. While a nuanced understanding of assistance is important, the law has placed important safeguards to make sure that whatever limitations may exist in reality do not weigh on the needs the law is designed to protect.

Appeals for assistance to people affected by conflict and violence in Afghanistan have persisted for over 20 years. The situation has only intensified since the regime change in August 2021, with half of the country’s population now in need of humanitarian assistance – a 30 per cent increase on last year – relegating the situation to the worst humanitarian crisis in the world. Most recently, the armed conflict in Ukraine has raised fears of ‘driving up hunger’ in conflict zones, while many have rang the alarm over how Afghanistan’s humanitarian crisis seems to have been deprioritized, risking a further decrease in assistance that comes with a crisis ‘in the spotlight’.

The IHL rule foreseeing access for humanitarian relief to civilians in need has been found to have customary status. It states that ‘[t]he parties to the conflict must allow and facilitate rapid and unimpeded passage of humanitarian relief for civilians in need, which is impartial in character and conducted without any adverse distinction, subject to their right of control’. An additional customary rule foresees that the parties to the conflict must ensure the freedom of movement of authorized humanitarian relief personnel essential to their functions, and that only in case of imperative military necessity may their movements be temporarily restricted.

These two rules read in tandem imply that States (or a party under whose control people find themselves) must meet the basic needs of the people under their jurisdiction or control and, in case they are unwilling or unable, allow for relief personnel to do so. Humanitarian personnel and the objects used for humanitarian relief operations must be respected and protected at all times. Finally, rules protecting the provision of medical assistance remain essential for the protection of vital humanitarian relief, for wounded and sick civilians and fighters who refrain from acts of hostility and whose medical condition requires appropriate and swift treatment, and for people providing medical assistance who should not be harmed, prosecuted or otherwise punished for doing so.

Late last year, these customary rules were put to a test by the UN sanctions regime, resulting in the need for the ICRC to stress the importance for the international community to strike a ‘balance between sanctions measures and protection for humanitarian action’ in a way not to let political considerations negatively affect the ability of humanitarian assistance to reach those in need. It added that ‘economic sanctions meant to punish those in power in Kabul are instead freezing millions of people across Afghanistan out of the basics they need to survive’.

Crucially, UN Security Council Resolution 2615 carved out the necessary humanitarian exemption to the sanctions regime established by resolution 1988 (2011), enabling the provision of humanitarian aid to Afghanistan. This highlights a realistic (and necessary) way to reconcile IHL obligations with sanctions legal frameworks, although much work remains to be done for its implementation into domestic legislation.

Providing humanitarian assistance to those who need it – without discrimination

The principle of non-discrimination is at the heart of IHL, perhaps implicitly acknowledging that conflict stokes division along several lines, ethnic, religious or otherwise.  In reality, it is those very lines that must not create obstacles to realization of people’s rights as human beings.

Adverse distinction based on race, nationality, religious belief or political opinion is prohibited by IHL, including for humanitarian assistance. All people affected by armed conflict are entitled to fundamental rights and guarantees without discrimination. That said, differentiation (GCI Commentary, para 567) in treatment is not prohibited per se, and may even be required under IHL. Any form of differentiation that is not justified by substantively different situations and needs, however, is prohibited. International human rights law provides similarly stern measures against any form of discrimination, such as on the basis of race, sex, language, religion or social origin.

The people of Afghanistan have experienced decades of trauma. During this time, influencing factors such as politics, ethnicity, culture and religion have evolved and morphed and, as such, extra caution needs to be exercised to ensure that any and all humanitarian assistance does not distinguish on any ground other than need. To effectively ensure equal access to humanitarian assistance as required, enabling conditions both by the parties and the humanitarian organizations need to allow for groups at risk of adverse distinction to be considered – by ensuring, for instance, culturally appropriate ways for needs to be assessed.

This position is supported by Common Article 3 in the Commentary on the First Geneva Convention (para. 573), which specifies that neutral measures could adversely affect certain people. In adopting general policies, parties need to take into account their potential consequences on all people. It is also equally important to screen aid beneficiaries to ensure that aid serves its humanitarian purpose and does not materialize in a way that effectively dispossesses people in need of their right to assistance.

Any discussion on humanitarian assistance in the present-day Afghan context requires an understanding of the basic Islamic rules that govern and regulate it.

A cardinal objective of Islamic law is the protection of life,[1] and the preservation of humanity is the natural outcome of the sanctity of life. This vital objective is linked to the delivery of essential services, such as medical care and economic assistance. It is permissible for Muslims to accept relief, including medical assistance, from any country, as well as to deliver assistance to non-Muslims.[2] This is underlined by the Prophet Mohammad telling Thumamah ibn Uthal, the chieftain of Yamamah, to remove an embargo on the supply of grains, as it was putting undue pressure on the Meccans.[3]

Under Islamic law, there are two kinds of charity: the obligatory (wajeb) and the desirable (mustahab). Unlike the system for the obligatory charity, no specific amount is foreseen for mustahab. One can, however, give as much as they can and want to the poor and needy. Under wajeb, obligatory charity, there are two subsequent categories: zakat (which includes ushr –a ten percent tax on land produce) and kaffara (a type of fine for deliberately missing or breaking fast during Ramadan without a valid reason). The category of people who can benefit from this is vast, including ‘needy people’ as well as ‘those who are left behind’ and those assisted ‘for the sake of God’.

As Jamal Krafess notes in his article on the influence of the Muslim religion in humanitarian aid, ‘the act of giving money or helping someone in distress is not left to the free choice of the believer, but is instead an obligation in the same way as is prayer, fasting during the month of Ramadan and the pilgrimage to Mecca’. The holy Quran and ahadith include sufficient provisions on assisting those in need of humanitarian assistance, whether in the form of medical care, food etc. The Prophet said: ‘Give charity without delay, for it stands in the way of calamity’ and also ‘feed the hungry, visit the sick, and set free the captives’.

In Riyad as-Saliheen, Imam Abi Zekria Yahya bin Sharaf Nowi Damishqi cites ahadith, the words, deeds and tacit approvals of the Prophet Mohammad that signify the obligations of the public authorities to address the needs of the people. For instance, he said, ‘he who does not look after his subjects with goodwill and sincerity will be deprived of the fragrance of Jannah’. In fact, the holy Quran (Surah e Mudassir) depicts a scene of the hereafter wherein those burning in fire say that they are punished because they refrained from affording the poor their rights and leaving them in a state of hunger.[4]

The obligation under Islamic law to protect human lives forms a vital aspect of facilitating access to humanitarian assistance. Hindering access to humanitarian assistance would fall contrary to the objective of saving lives and ensuring maslaha (the public good), which would constitute infliction of harm, an act prohibited in Islam by the first part of the Fiqh legal maxim ‘la darar wa la dirar’ (harm should not be inflicted nor reciprocated).

The holy Quran promises paradise to ‘those who, for the love of Him, feed the needy, and the orphan, and the captive’. Several ahadith also stress the obligation of the public authorities to address the needs of the people. Facilitating access to humanitarian assistance would play a significant part in the fulfillment of this obligation. For example, as Abu Maryam al-Azdi narrated:

‘When I entered upon Muawiyah, he said: How good your visit is to us …. I said: I tell you a tradition which I heard (from the Prophet). I heard the Messenger of Allah (Peace be Upon Him) say: If Allah puts anyone in the position of authority over the affairs of the Muslims, and he secludes himself (from them), not fulfilling their needs, wants, and poverty, Allah will keep Himself away from him, not fulfilling his need, want and poverty. He said: He (Muawiyah) appointed a man to fulfil the needs of the people’.

The Prophet Mohammad is quoted in several ahadith as imposing a general prohibition of discrimination, saying that whoever invokes tribalism, favoring one tribe over another, is not one of us, and if he dies while supporting tribalism, he dies in ignorance.

Prohibition of discrimination was also part of the last sermon of the Prophet Mohammad, who said ‘all humans are descended from Adam and Eve. There is no superiority of an Arab over a non-Arab, or of a non-Arab over an Arab, and no superiority of a white person over a black person or of a black person over a white person, except on the basis of personal piety and righteousness’. From the above, it would follow that there are no known exceptions where discrimination would be permissible – and while personal piety and righteousness could be factors in differentiating groups of people, it would still not be an acceptable barrier to assistance.

Ultimately, international humanitarian law and Islamic law apply the same rationale and reach the same conclusion: All those in need should be assisted, and assistance reaching them should not discriminate. The provisions analyzed here elevate the importance of this requirement, and all have their place in the discussion on Afghanistan today.