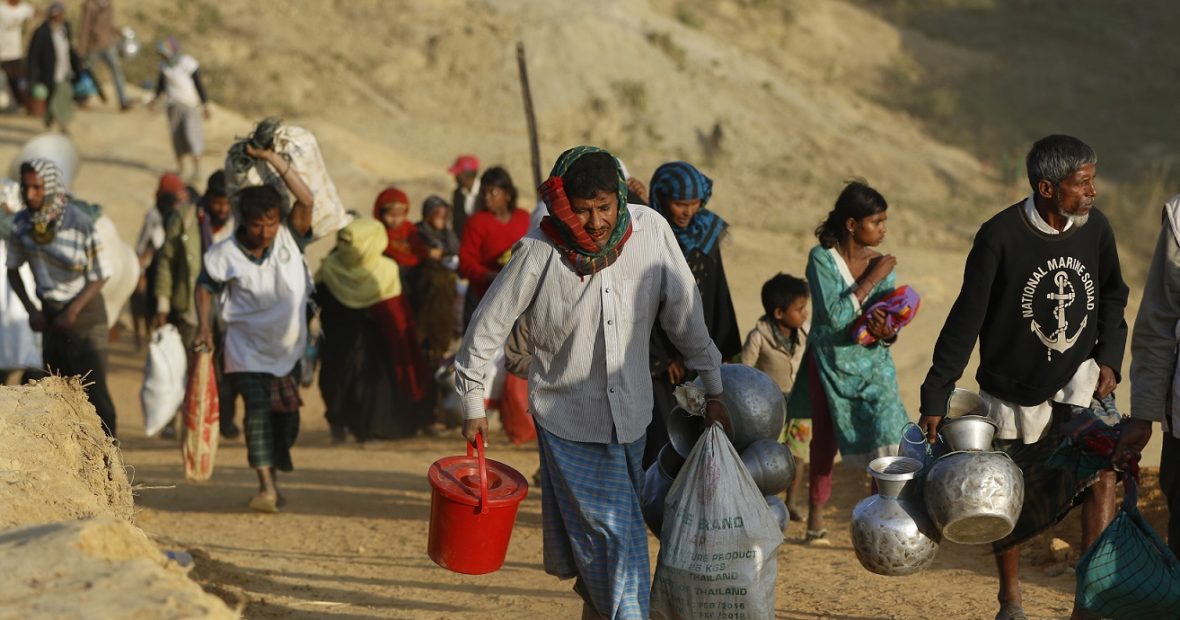 As we mark World Refugee Day this year, the UN High Commissioner for Refugees (UNHCR) has announced new and staggering figures, ones that have been growing steadily over the past ten years. By the end of 2020, 82.4 million people had been forced to flee their homes, among them 26.4 million refugees. Within these sobering statistics, three countries with a predominantly Muslim population held undesirable top rankings: Syria, with the highest number of refugees, Turkey, where most refugees were hosted, and Lebanon, which hosted the highest number of refugees relative to its population size[1]. More generally, the data confirms that, at least in the near future, the displacement crisis is unfortunately unlikely to ease up in these regions. In this post, Dr. Ahmed Al-Dawoody, ICRC’s legal adviser on Islamic law and jurisprudence, and Dr. Tilman Rodenhäuser, ICRC legal adviser, explore the roots and scope of protection against refoulement in Islamic law. The authors share the view that an ‘indigenous, culturally viable Islamic protection framework’ can reinforce and complement the international law principle of non-refoulement.
ICRC Humanitarian Law & Policy Blog · The principle of non-refoulement under Islamic law and international law

The principle of non-refoulement is the established ‘cornerstone’ of refugee protection. Under international refugee law, it prohibits States to ‘expel or return (“refouler”) a refugee in any manner whatsoever to the frontiers of territories where his [or her] life or freedom would be threatened on account of his [or her] race, religion, nationality, membership of a particular social group or political opinion’ (Article 33). This principle is also found in regional refugee protection instruments, human rights law, international humanitarian law, and extradition treaties, and is – in its core – recognized as a rule of customary international law (see here). This means that the principle is applicable to all States, including those that host significant numbers of refugees but are not party to the 1951 Refugee Convention or its 1967 Protocol (for further analysis, see here). The prohibition to return persons to a country in which their fundamental rights are threatened exists not only in international law. For example, well before its codification in international refugee law in 1951, it was part and parcel of other legal frameworks, norms, cultures and traditions, including Islamic law.

The history, source, and scope of the principle of non-refoulement in Islamic Law

Seeking refuge and asylum is an issue that Muslims can easily relate to, both historically and emotionally. Asking for and granting amān (asylum, protection) was commonplace in pre-Islamic Arabia, where the tribe constituted the political unit as well as the source of belonging and protection for its members. If individuals were expelled from their tribe, they had to seek refuge in another tribe for protection. The practice of granting protection to ‘refugees’ was therefore an established tradition in pre-Islamic Arabia.[2] Later on, it also became regulated in Islamic law.

In pre-Islamic Arab culture, protection of refugees entailed protection of their person, family and possessions; denying protection to refugees was seen as a dishonorable act.[3] The protectors pledged to defend refugees as they would themselves, their own families and possessions. Pre-Islamic Arab tribes such as the tribes of Banū abd Al-Madān Al-Harithīūn and Banū Milḥim ibn Dhuhl built special houses for refugees and asylum seekers. Arab poets, such as Rashid ibn Shibah Al-Yashkarī and Maymūn ibn Qays Al-Ashā (d. 625 CE), also took pride in poems about building tall and strong buildings for housing refugees and asylum seekers, imploring that there was no place for humiliation and harm in these buildings for those who fled their places of origin. Granting protection to refugees emanates from the virtues of chivalry, hospitality, protection of the weak and nobility, which constitute part of what William Montgomery Watt has called Arab ‘tribal humanism’.

The first instances in Islamic history of granting protection comparable to today’s principle of non-refoulement were the first and second ‘flights’ (hijrah), when Muslims found protection in Abyssinia (modern day Ethiopia) and Medina. In 615 CE, 83 Muslims fled to Abyssinia following persecution by their Meccan enemies. At that time, the negus, Christian king of Abyssinia, rejected the request made by the Meccan envoys to hand the Muslim refugees over. Had the negus delivered the group, their lives would have been threatened because of their new religion, Islam. When persecution of the nascent Muslim community escalated further, most of the Muslims began a second hijrah, fleeing from Mecca to Medina on July 16th, 622 CE, the date that now marks the beginning of the Islamic calendar. Here also, their new host, the inhabitants of yathrib (now Medina, in Saudi Arabia), promised to protect the Muslims from their Meccan oppressors.

Amān, the source of refugee protection in Islamic law

In Islamic law, protection for refugees is grounded in the notion of amān, which literally translates as ‘protection’ or ‘safety’. As a legal term in Islamic law, amān refers to different concepts. The one most relevant for our purposes understands amān as the granting of refuge or protection to people who have fled their homes because their lives and freedom are threatened.

Under this concept of amān, the discussions of the classical Muslim jurists address the situation of granting protection to refugees who are non-Muslim foreign nationals. This is because at the time, Muslim foreign nationals had the automatic right to enter and/or reside in the Islamic State. They did not need to seek protection, as it was automatically guaranteed to all Muslims globally as well as dhimmis (i.e., permanent non-Muslim residents of the Islamic State).

Since the very essence of amān entails the sanctity and protection of the life and property of the musta’min (refugee or asylum seeker), refoulement constitutes a violation of the protection provided under the amān contract.

The scope of refugee protection under Islamic law and international law

First, the beneficiary. While all Muslims have a right to reside in Islamic territory, historically referred to as the Caliphate, amān is granted to non-Muslim foreigners under Islamic law; both Muslims and non-Muslims are therefore entitled to some form of protection. Under the 1951 Convention, the principle of non-refoulement protects refugees who are, by definition, non-nationals. This status is granted irrespective of a refugee’s religion. Moreover, under international human rights law, refoulement is prohibited irrespective even of nationality.

Second, the grounds of non-refoulement, meaning the reasons for which a person can seek protection. Under Islamic law, the classical Muslim jurists stated that the objective of amān is ḥaqn al-dam, meaning prevention of bloodshed and protection of life, but it also includes protection against oppression and persecution. Under the 1951 Convention, the principle protects persons against refoulement to a place where a refugee’s life or freedom would be threatened on account of race, religion, nationality, membership of a particular social group or political opinion. International human rights law has broadened these grounds further.

Third, the authority granting non-refoulement protection. Under international law, protection against refoulement is granted by the territorial authorities, normally the State. In contrast, under Islamic law both the Islamic State authorities and Muslim individuals are entitled to grant amān, respectively, to an entire group or population (general amān, by the authorities) and to individual refugees (specific amān, by ordinary individuals). While some jurists from the Mālikī school of law condition the amān granted by Muslim individuals upon approval by the State authorities,[4] this is not the commonly held view.

Fourth, exceptions. In Islamic law, an asylum request should be accepted and cannot be withdrawn except in two cases: if the refugee engages in hostilities or in espionage.[5] The 1951 Convention also recognizes certain exceptions to refugee status and to the principle of non-refoulement, for instance when a refugee constitutes a danger to the security of the country in which the person is, or if she or he has been convicted by a final judgment of a particularly serious crime and constitutes a danger to the community of that country.

Even when the amān is withdrawn or after the expiration of its term (in case of temporary amān), according to the Qur’an (9:6) a musta’min must be escorted to a place of safety, and therefore it can be concluded that refoulement to the place the person fled from and where life and freedom will be threatened is prohibited. This can, to some extent, be compared to the interplay of international refugee and human right law. The principle of non-refoulement under human rights law allows no exception or derogation and is afforded to every individual within a State’s jurisdiction, irrespective of his or her legal status. Thus, even a person who could be returned in accordance with refugee law may still be protected against refoulement under human rights law.

In light of the current number of refugees in the Muslim contexts, it may be helpful to use Islamic legal and ethical frameworks as well as local cultures and traditions to protect refugees, in addition to continuously working for the respect of the existing international legal framework. Islamic law provides a legal framework for the protection of refugees[6] that can popularize and strengthen the current international society’s efforts to protect and assist refugees in Muslim contexts.[7]

Undoubtedly, the Islamic legal and ethical frameworks play a prominent role in the daily lives of hundreds of millions of Muslims; ignoring the impact of these Islamic frameworks could risk increasing the plight of refugees. For international organizations and international law experts whose work covers Muslim contexts but who have no expertise in Islamic law, developing such understanding and expertise will have a concrete added value to ensure better compliance with international law rules. To this effect, dialogue and exchange of expertise with international organizations and Islamic law experts can help to develop local means to better protect and assist refugees and asylum seekers in Muslim contexts.

[2] When studying the protection of refugees in pre-Islamic Arabic tradition and Islamic law, a number of concepts are used, such as amān and ijārah. In this post, we use the concept of amān, which is the Islamic law concept regulating what we call today non-refoulement.