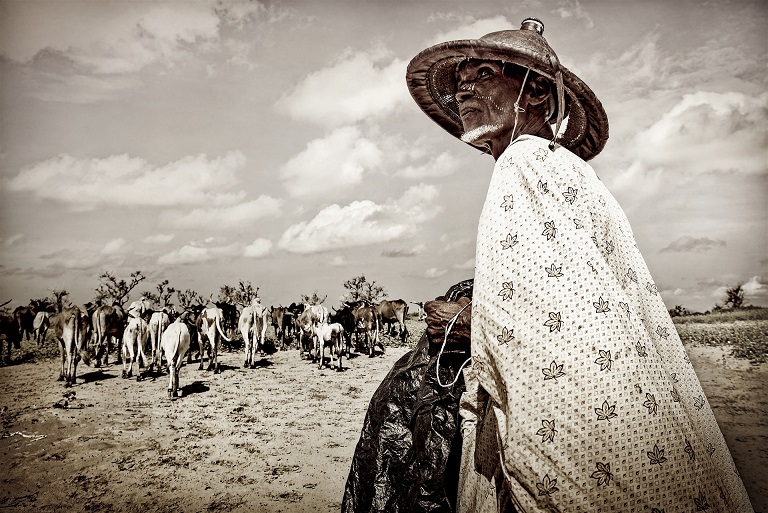 Communities enduring conflict are on the frontlines of the climate crisis. Paradoxically, they are also among the most neglected by climate action. It is increasingly urgent to act. The climate crisis is deeply unsettling, as it forces people to reinvent their ways of life. This reality needs to drive the conversation and lead to more and faster action.

In this post – ahead of the UN Climate Change Conference (COP26) and part of our special series on climate change, conflict and humanitarian action – ICRC Policy Advisor Catherine-Lune Grayson calls on us all to step up our collective efforts to support conflict-affected populations in adapting to growing climate risks.

The first is a call. We need to strengthen climate action in conflict settings – and in particular, climate adaptation – as people need to adjust to current and future climate risks. This is still being neglected.

The second is a plea. We should not let clinical language obscure the fact that these discussions are about us, humans. They are about the intimate changes to our identities and the course of our lives that are forced upon us by the climate crisis.

When we started scaling up our engagement on the humanitarian consequences of climate change on communities living through conflict, we conveyed a simple message: the climate crisis matters to us because it deepens the vulnerability of the people we work with, in places such as Afghanistan, Burkina Faso and Yemen. And yet climate action fails to reach them. This needs to change.

We’ve said it many times: countries enduring armed conflict and other situations of violence are among the most vulnerable to climate change. Some 60 per cent of the 25 States deemed most vulnerable and least ready to adapt to climate change by the ND-Gain Index are mired in conflict. This is not because climate change directly causes conflict, but because countries’ capacity to adapt to a changing climate is drastically limited by the disruptive impact of wars, which weaken institutions and essential services and erode the economy, social cohesion and development.

Such acute vulnerability and severe capacity constraints should, in theory, ensure that countries in conflict, a vast majority of which are among the world’s least developed countries (LDCs), are adequately supported to adapt to a changing climate, in line with the Paris Agreement (Article 9, paragraph 4). However, in practice, they are among the most neglected by climate action and finance. This means that the humanitarian consequences of climate shocks are likely to continue growing, forcing larger humanitarian responses and further jeopardizing arduously achieved development milestones.

Humanitarian and development circles are increasingly getting the message. But more needs to be done to bring the climate community on board and to translate this awareness into action. The COP has so far not addressed the unique challenges resulting from situations of conflict and the need for scaling up climate action in such locations, in part because this is politically sensitive, but also because instability and insecurity makes it harder to design and implement longer-term interventions.

To translate existing commitments into reality, parties to the United Nations Framework Convention on Climate Change need to acknowledge the high vulnerability to climate risks of countries in conflict and focus on urgent climate action to sustainably address their specific needs. And yes, this entails testing new approaches, finding new partnerships, and working both at a small and large scale with local communities in places struggling with instability.

Right now, two critical imbalances limit the potential for adequate climate action in conflict-affected countries. First, although States committed in the Paris Agreement to ensuring a greater balance between finance for mitigation and adaptation, adaptation funding still significantly trails behind. Second, despite the Paris Agreement’s commitment to increase support for the world’s LDCs, there is a significant disparity between funding for stable middle-income countries and LDCs. Within the group of LDCs, funding is not equally distributed, and the most fragile countries and locations with the weakest institutions tend to receive the least of it. Within countries themselves, when climate finance is provided, it often excludes conflict-affected locations, particularly when these territories are not under the control of the State. This leaves out millions of people.

These gaps can largely be explained by a low acceptance of the risks stemming from instability, and weak governance and institutional capacity; access and accreditation requirements and programmatic modalities that are unfit for purpose; and the fact that in situations of conflict, the focus is often on shorter-term action to address the direct consequences. Longer-term measures to strengthen the resilience of communities may not be prioritized. These are all real challenges, as formulas that work in stable countries may not easily transfer to unstable ones.

A week ago, along with the World Bank and several other partners, we brought together a group of experts to discuss how to ensure that climate finance reaches those who need it the most, in line with international commitments. Solutions likely revolve around rethinking risk aversion and the mechanisms of access to climate finance in conflict situations, and finding ways, including through diversifying partners, to ensure that climate adaptation is adequately supported at the local level.

The bottom line is that we cannot let risk aversion and burdensome requirements to access funding and support prevent large groups of people from receiving much needed support. The fact that this is complicated cannot justify inaction.

I have been writing in rather cold and technical terms. But the fact is that the convergence of climate risks and armed conflict is forcing people to change their ways of existing in this world. In that sense, it is important to go beyond the material implications of climate change and speak about the impact that climate change is having on people’s very identity.

A few years ago, as we carried out the research presented in When rain turns to dust, we discussed access to water, food and economic security with people in northern Mali, the interior of the Central African Republic and southern Iraq. Of course, insecurity, water, food, farming, and cattle-herding were at the heart of people’s trouble. So was the fact that the unreliability of weather patterns and changes to the environment were deeply unsettling.

We repeatedly heard people conveying a deep sense of loss and disorientation, as they felt they could no longer recognize their environment or read the weather, and were simply not equipped to deal with the constant threat of climate hazards.

We heard it from livestock herders in Mali and the Central African Republic, as they described how they had lost their livestock and had been forced to change their way of life. There, being a herder is more than a profession; it is at the core of people’s identity and lineage.

We heard it from Iraqis from the Fertile Crescent, evoking a time where the land was green, water was plentiful, and coexistence peaceful. This is a place where unrestricted access to water and soil fertility have long been at the root of people’s identity.

We heard it in the grief of Central Africans who had been forced to leave their island on the Ubangi River and had lost their homes, harvests and belongings to floods.

Anthropologist Liisa Malkki has convincingly criticized our sedentary bias and has called for rethinking our depiction of people – refugees, in particular – as so rooted in their place of origin that when faced with changes, they are unable to adapt. Her work underscores the fluidity of our identities and the relations we have with places, and the fact that we are to some extent constantly reinventing ourselves.

Malkki is right about the fluidity of our identity. We are constantly changing and adapting. People are not inextricably rooted in their environments and unable to adapt to change. But we also need to recognize that changes to people’s environment have very personal implications and that adapting to these changes can be deeply unsettling and challenging, especially when the means to adapt are scarce.

We need to keep this in mind in climate policy discussions. We need to remember that this is about us, as humans, and the way that climate change is forcing us all to reinvent ourselves. And, once again, those who are less privileged find themselves on the hazardous frontlines.

This brings me back to the beginning. Collectively, we must do more to live up to our commitments to support the most vulnerable in the face of growing climate risks, so they can adapt in a safer manner to unavoidable changes.