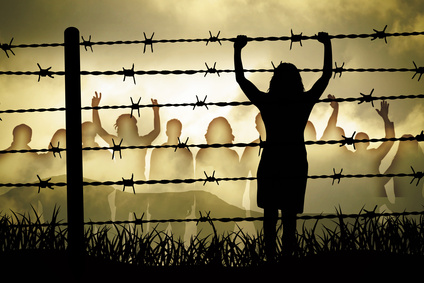 Although acts of terrorism are prohibited under a wide variety of legal regimes at the international, regional and domestic levels (including international humanitarian law, or IHL, during armed conflict), there is no universal definition of “terrorism” under international law. Despite this lack of clarity, dehumanizing rhetoric is used by some across contexts where individuals or groups are labeled “terrorist.” This is a dangerous trend, in particular as such demonization may impact humanitarian actors and civilian populations perceived to be associated with “terrorists” during armed conflict.
ICRC Humanitarian Law & Policy Blog · The power of words: the dangerous rhetoric of the “terrorist”

The roots of “terrorism” as a concept can be traced back to the French Revolution, but the means and methods employed to cause terror are ever-evolving.

Today, terrorism is a global phenomenon that, while occurring in both wartime and peacetime, is often linked to armed conflict. Globally, deaths from terrorism have been falling since 2014, but the impact of terrorism is still felt in more countries around the world than it was before 2001. Far-right extremism is on the rise, and domestic terrorism is coming back into the spotlight, notably in Europe, the US and the Asia-Pacific.

Dehumanizing the “enemy” is an age-old practice in war propaganda. The UN Secretary General’s Special Adviser for the Prevention of Genocide, Adama Dieng, has stated that genocide starts with dehumanization. Other scholars contend that perceiving targeted individuals as less than human is a necessary precondition for other atrocities.

The ICRC has cited discrimination, ostracization and dehumanizing rhetoric faced by people accused of terrorist attacks, their families or others affiliated with them, which may create a sense of exceptionalism, meaning that counter-terrorism efforts could justify the use of tactics otherwise deemed unacceptable, including war crimes or even torture.

This can be seen in the rise of the “foreign fighter” in international discourse. “Foreign fighter” is not a term of art of international humanitarian law, but how do IHL principles and rules apply to these belligerents? France and Denmark count among countries that have faced this challenge, demonstrating that it is possible to handle cases of nationals returning from the battlefield in Syria and Iraq under existing domestic law and international obligations. Yet many of these people and their families are forced to live in inhumane conditions, unethically characterized as less than human.

The hard-won lessons of war

The applicability of IHL to the fight against terror is often called into question in political rhetoric, and is one of the major challenges faced by humanitarian lawyers today. Counter-terrorism narratives often imply or even expressly state that “the rules don’t apply,” especially related to detention or the use of lethal force, because the threat is so great or the enemy so devious.

This is a naïve reading of the rules applicable in war and other extreme situations, which were designed specifically to come into play in the worst of circumstances and when emotions are running high. In particular, the 1949 Geneva Conventions, negotiated after WWII by individuals who had just survived a brutal war, sought to enshrine some hard-won lessons to prevent such suffering in the future. As the international community combats the horrific phenomenon of terrorism, it is essential to heed these lessons and to acknowledge that there are limits on what can and should be done to combat this threat.

Furthermore, where counter-terrorism measures do not comply with international obligations they can prove damaging, undermine a State’s long-term interests and feed extremism rather than fight it.

The impact of demonization on humanitarian aid

There is a serious concern that “terrorism”-related rhetoric will be reflected in the way that States approach both civilian populations associated with actors designated as “terrorist” as well as humanitarians seeking to provide life-saving protection and assistance.

In response to the threat of terrorist attacks, States, regional organizations and the UN have undertaken numerous measures aimed at those that perpetrate them. While pursuing the legitimate aim of ensuring State security, States must maintain the safeguards protecting human life and dignity laid down in the applicable rules of IHL and international human rights law. This includes the rules protecting civilians living in territories controlled by such groups designated as terrorist and the right of those civilians to impartial and neutral humanitarian and medical assistance.

The designation of a non-State armed group as “terrorist” means that it is likely to be included in lists of proscribed terrorist organizations maintained by the UN, regional organizations and States. The balance between the political aims of the UN Security Council and the requirements of international law, including IHL, must be carefully struck.

The impact of counter-terrorism measures on children is one area that highlights the tension between humanitarian and security considerations, and the contrast in how children formerly associated with “terrorist” groups may be reflected in policy.

Humanitarian actors are also caught in the middle, and continue to raise concerns that restrictions on assistance designed to combat terrorism could have unintended consequences and may be inconsistent with humanitarian principles. Some even fear prosecution for providing life-saving aid.

The prohibition of unqualified acts of “material support,” “services” and “assistance to” or “association with” terrorist organizations found in certain criminal laws could, in practice, result in the criminalization of the core activities of humanitarian organizations and their personnel. The potential criminalization of humanitarian engagement with non-State armed groups designated as “terrorist organizations” may reflect that the notion of neutral, independent and impartial humanitarian action has been undermined by dangerous and counterproductive propaganda.

The relationship between terrorism, counterterrorism and IHL has been much discussed in law and policy circles, but unresolved issues remain.  Terror and counterterror will be the subject of an upcoming edition of the International Review of the Red Cross. See the call for papers here, with a deadline for submissions on 30 June 2020.