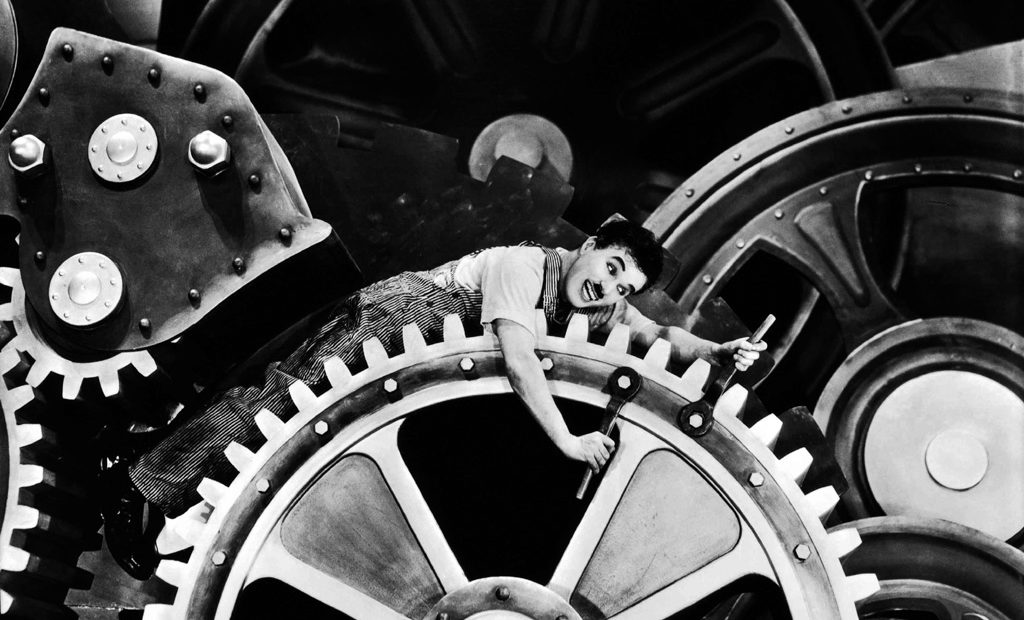 
The great nineteenth century German sociologist, Max Weber, wrote brilliantly and presciently about the tension between charisma and bureaucracy while the modern administrative State was being formed across Europe. He noted how charisma inevitably ‘retreats’ in the face of bureaucracy or becomes ‘routinized’.[1]

The retreat of charisma from humanitarian organizations is a challenge for us all.

Humanitarian action certainly needs effective administration and the well-organized allocation of resources, which a good bureaucracy provides. Bureaucracies and bureaucrats do provide important services like institutionalizing and sustaining values, creating and spreading sound policy, achieving wide coverage and scale, and giving people careers. Weber notes that the ‘permanence’ of bureaucracies is their great strength, while charisma often bursts into light at moments of crisis to fade again when it has changed the course of events.

There are important things which bureaucracies struggle to do, like making quick decisions, cooperating with one another, showing a human face and giving their employees a vibrant sense of agency and impact. Bureaucracies also, of course, tend to develop deep vested interests in the status quo.

The humanitarian sector needs transnational administration, but it also needs ingenuity, agility and energy to create new forms of humanitarian action to replace the dominant practices of humanitarian bureaucracies if their pace and approach is at odds with the times.

When I joined Save the Children UK in 1983 as an enthusiastic 22-year-old theology graduate, setting off to Morocco with a suitcase, typewriter and guitar, the humanitarian sector was still small and led by a few striking individuals.

Save’s London Headquarters were in a former girls’ school in Camberwell, London. People worked together in old classrooms and the school hall was partitioned between logistics, fundraising and accounts. An old store cupboard was used to hold a basic supply of emergency medicines.

It was in here, the day before leaving for Sudan in 1985, that the legendary John Seaman, one of only two global medical advisors, gave me the necessary vaccinations. This included the old gamma globulin jab which took a while to sink in, making it best not to sit down for the rest of the day. At this time, Save had one accountant for international operations and one personnel officer for international recruitment.

The UK Government was much the same. DFID, the Department for International Development, was then called the Overseas Development Administration and a remarkable woman called Dorothy Cherry was in sole charge of the UK’s emergency funding. “Ring Dorothy” was a phrase often heard at peak moments. In Ethiopia, the British embassy had one very energetic and able diplomat in charge of all British funding and response.

Most emergency medical supplies for UK NGOs at the time were sourced and delivered by ECHO. This was not the European Civil Protection and Humanitarian Aid Operation of today. The “E” stood for Evangelical, not European, and it was a small charity founded and run by two deeply Christian brothers who specialized in supplying missionary hospitals in Africa.

There was not much paper work but there were a lot of decisions. Our spirit was ambitious and amateur, in the best sense of doing something we loved. We were a very small part of global politics and had the gutsy can-do attitude of the plucky underdog as we applied medical and nutritional expertise to situations of extreme mass suffering.

There were discussions, orders, discipline, lots of personal initiative and the usual inter-personal dysfunction in some teams. There were hardly any communications – mainly telex, typed letters and telephone – so we all tended to be given broad objectives and instructed to get on with it. We were then checked up on regularly in visits by ‘Field Directors’.

And we were young. Most of us were in our 20s and early 30s but always guided by a few older people at the top who had done this before in Biafra, Bangladesh and the previous Ethiopian famine. This experience gave me a lasting admiration for the operational energy, courage and judgement of young people. No major operation of any kind should be mounted without young people out in front. They are the great change-makers and the great risk-takers. Seeing the world for the first time brings a special insight, just as seeing it for the umpteenth time brings a particular wisdom. The two go well together.

The culture was one of great enthusiasm, pragmatism and humor mixed with staunch complaining in the quintessential British manner. Many of our people were charismatic outsiders who had found a place of relative freedom and autonomy beyond more conventional and bureaucratic jobs at home.

Our organizations were relatively light and face-to-face. Our operations could be flexed or re-purposed relatively quickly and people along the operational chain from project to capital to headquarters had high levels of discretionary power. Our donors took less power than they do now and were content with broader reporting and a few specific measures of success.

Nobody could have honestly described Save the Children as a bureaucracy in the 1980s. We were more like an enterprising and fast-growing company – mesmerized and intrigued by what we could achieve, and slightly amazed that we could do so much from an old school building in London.

At the same time, it was clear to everyone that we needed a bit more bureaucracy and accountability. The sector also needed to achieve greater scale to match the vast effects of large conflicts. In the 1980s, annual global humanitarian assistance was always under $2 billion but huge numbers of people were affected by war. An estimated four million people died in armed conflicts during the 1990s and there was an average of 35 million IDPs and refugees throughout the decade, with global humanitarian aid peaking at just over $5 billion.[2]

The sharp and steady rise of humanitarian funding started in the 2000s. Today it stands at $29 billion for 2018. With this budget expansion came steady bureaucratization.

Bureaucratization and its challenges

Today, the humanitarian organizations that oversee and spend the vast majority of this $29 billion are big transnational bureaucracies, and there is a sense across the sector that the pendulum has swung wide enough towards administration. A better balance between dynamism and bureaucracy now needs to be struck as we work on the cusp of global climate crisis and increasing conflict.

There are perhaps eight key features of bureaucratization which tend to stifle and inhibit more creative and fast-moving humanitarian cultures of charisma, adaptation and renewal.

A better balance between dynamism and bureaucracy?

What can we do to reduce the culture of bureaucracy in humanitarian organizations? Maybe nothing at all. Perhaps bureaucratization is simply the very nature of size. Weber is probably right that charisma and bureaucracy do not naturally go together. Charisma arises at pivotal moments of change and then recedes in the face of re-structuring.

So what shall we do with our big bureaucracies? We could try a few things.

First, we could apply Ockham’s Razor a little more frequently. William of Ockham, a thirteenth century Franciscan critic of an overly developed Papal bureaucracy, was a staunch supporter of simplicity in thinking and organization. His famous rule of Ockham’s Razor, insists upon the principle of simplicity and urges that we cut away unnecessary complexity if we can get to the same result with simpler reasoning or resources.

This injunction to “keep it simple” is a useful mantra for us all. If a simple and minimal solution is workable then always use it instead of a more complicated and expensive one. In other words, do not hire a new person or build a new team for every new problem or task. Prioritize decisions over meetings and working groups. Do not assume that the collective intelligence of many will be better and faster than the intelligence of one or two people. Breakthroughs and innovation usually come from individuals, not groups. Collectives often default to a consensual fudge.

Secondly, we could reduce and repurpose humanitarian bureaucracies around local actors and so change our business model to one of genuine partnership and localization. We could take localization and South-South solidarity seriously and become investment partners more than expeditionary operators.

Here, of course, we may hit a paradox that in de-bureaucratizing ourselves we then bureaucratize others. In 1970, Oxfam helped seed fund a charismatic organization called BRAC with a grant of £10,000 in Bangladesh. Today BRAC is a near billion-dollar agency and, no doubt, a bureaucracy too. But at least it is an Asian bureaucracy.

Thirdly, we could put young talent in the vanguard of our organizations and enable it to be more dynamic. Youth often both carries and attracts charisma. This is obvious in many social movements. People often look back at the leaders of the civil rights movement in the USA and imagine them as mid-lifers. In fact, most were in their late teens and early twenties. Martin Luther King was one of the oldest, at 28, when he became a leader of the movement.

Young people should be free to fly in our bureaucracies in the same way the Red Cross and Red Crescent Movement has always deployed young volunteers on the frontlines.

Fourthly, we should remember Weber’s caution that charisma is a ‘value neutral’ phenomenon. We need charisma, but we must be sure it is authentically and constructively humanitarian, a goal often best guided by wisdom and experience.

Finally, we bureaucrats should expect to be surprised, bemused and threatened by new charismatic forms of humanitarian ingenuity. New good things often sound strange at first because they see change before we do.

The composer, Robert Schumann, was another great German who died shortly before Max Weber was born. In the two years before he died, he became mentally ill and detached, but wrote many new pieces for piano. One of these was a song cycle called the Songs of Dawn. His wife, Clara Schumann, another great pianist, noted how they were “very original as always, but hard to understand, their tone is so very strange.”

Today, these pieces are easily heard as exquisitely beautiful. We can expect new bursts of humanitarian ingenuity to be the same. Strange to us and ahead of our times but essential for the times to come.

Hoping for something surprisingly good

Bureaucracies drive continuity. Charisma drives change. In this moment of global transition, we need ingenuity and charisma once again in the humanitarian sector – a new founding moment, driven perhaps from Asia and Africa rather than Europe and North America.

Perhaps the current 80s model of humanitarian action is reaching its peak. It may need to undergo a revolution to make itself fit for purpose in this age of climate emergency, popular activism and new great power competition.

Even if big humanitarian bureaucracies still command a valuable place in meeting human needs at scale, we also need more dynamic approaches to bring about the deep levels of community-based adaptation and survival required in the 21st century.

If humanitarian bureaucracies cannot bring about these changes themselves then we should at least look out for positive charismatic change by others, and then stand back and learn from them as people shape new ways of rescuing and protecting one another in the 2020s.