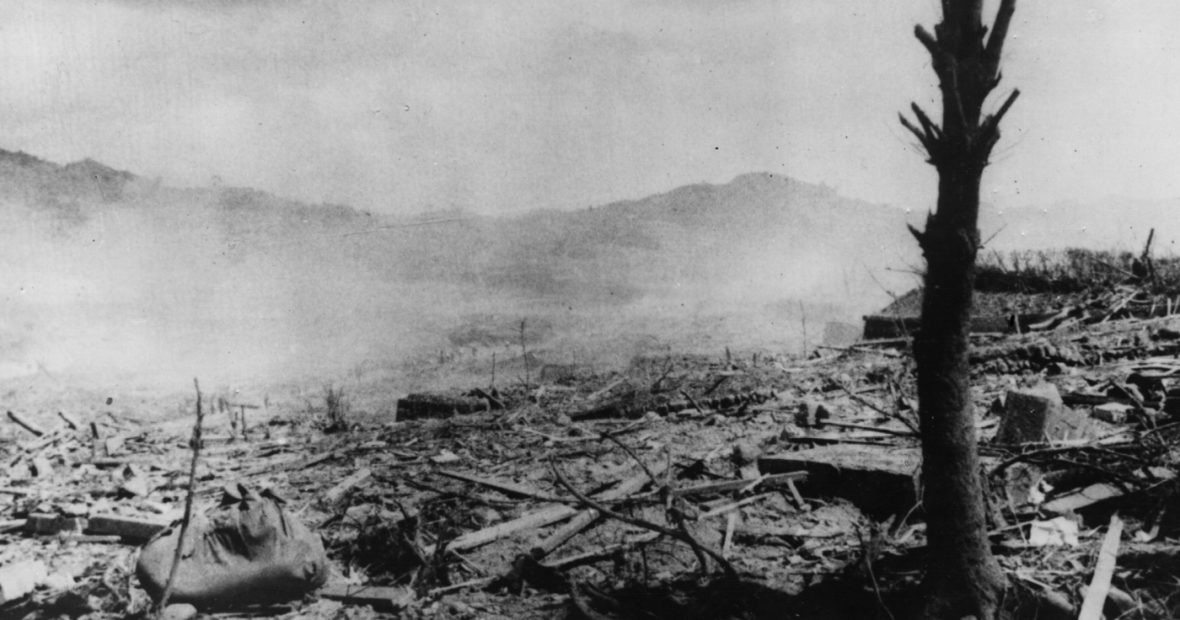 A global prohibition on nuclear weapons could be concluded and have significant normative and practical impacts with or without the initial participation of the nuclear-armed States (.pdf). During the Open Ended Working Group (OEWG) on nuclear disarmament, held at the UN in Geneva this year, a majority of States expressed support for negotiating a prohibition treaty. A resolution to start negotiations is expected to be sought at the General Assembly in October. A comprehensive ban would be an achievable, legally coherent and logical next step to the humanitarian initiative on nuclear weapons, which has developed over the past six years.

The humanitarian initiative on nuclear weapons has aimed to change the terms of global debate, moving from notions of strategic stability focused on the perceived interests of the nuclear-armed States and their nuclear-dependent allies, towards a focus on the impact of the weapons themselves on people and places. Concentrating on these impacts raises fundamental questions about nuclear weapons’ acceptability, with the evidence clearly highlighting these weapons’ incompatibility (.pdf) with humanitarian considerations.

Such a reframing has implications for nuclear-armed States and their allies that depend on others’ nuclear weapons in their security doctrines. It shifts the burden of proof onto them to demonstrate the legitimacy of their position in the face of the unacceptable humanitarian effects of any use of nuclear weapons. It avoids engaging with deterrence-based arguments on their own terms, whilst seeking to challenge their deep acceptance. It holds the aim of ending possession of those weapons: breaking the deadlock and lack of movement on nuclear disarmament has been the impetus for seeking to change the discourse on nuclear weapons. The involvement of the nuclear-armed States is not necessary for the terms of the global conversation to be changed by others. Initiatives dependent on their participation can and have been blocked and stalled.

Other humanitarian disarmament initiatives, such as on anti-personnel landmines and cluster munitions, have taken a similar basic approach of seeking to change unproductive policy environments through shifts in thinking. The humanitarian initiative has deliberately used lessons from these processes and mobilized existing networks of trust and key actors, with some of the same organizations and individuals working within States, non-governmental and international organizations having helped to initiate it or been involved.

The humanitarian approach to disarmament considers weapons from the perspective of harm caused, using a broader framing than legal argumentation alone. It aims to introduce doubt about accepted practices and whether these can then withstand the scrutiny of States and military commanders who consider themselves responsible actors.

Growing support for a humanitarian approach

Though the horrific consequences of any detonation has been a focus for concern about and opposition to nuclear weapons since their invention, conditions for a strategic reframing of the issue around a humanitarian perspective have arguably become more favourable recently, with the collapse of a bi-polar world order and more uncertainty in nuclear relations.

The re-emergence of humanitarian considerations in State discussions of nuclear weapons is linked to two key developments: first, the re-engagement of the International Red Cross and Red Crescent Movement with this issue from 2009 (including in a speech by the President of the ICRC in 2010 and a resolution by the Movement in 2011); second, on the initiative of Switzerland, the introduction of concern about the catastrophic humanitarian consequences of nuclear weapons, and the risks their possession poses, into the Nuclear Non-Proliferation Treaty (NPT) review cycle. The issue is noted in the Final Document of the 2010 Review Conference (.pdf) and has been raised at the NPT since.

Since 2010, interest from States in the humanitarian consequences of nuclear weapons and political support for this framing has progressively grown, and has been more sustained than for any other recent initiative. Over three quarters of States supported a statement on the issue at the 2015 NPT Review Conference, building on increasing support for similar statements in previous years at NPT meetings and at the UN General Assembly. Three conferences on the humanitarian impact of nuclear weapons were held in Oslo, Nayarit and Vienna in 2013 and 2014 with the participation of 179 States. These were held as the organizers (along with like-minded individuals and organizations) had decided that a specific forum was needed to focus and build momentum around a humanitarian reframing.

The humanitarian impact meetings involved the presentation by a variety of experts of evidence about the catastrophic physical, environmental and economic harm that would be caused by any nuclear detonation, and the impossibility of mounting an effective humanitarian response. Testimony from the survivors of nuclear detonations – previously often excluded from international discussions about nuclear weapons – was given a key role.

From a humanitarian perspective, any action developing out of a change in the discourse that is based on human consequences must address the rights of victims. At these conferences in particular, the sizeable presence and engagement of civil society, in particular the over 400-member International Campaign to Abolish Nuclear Weapons (ICAN), also helped to build support and legitimacy for the humanitarian initiative, and to encourage a principled approach from States.

The humanitarian initiative challenges the special status that the nuclear-armed States parties to the NPT have assumed for themselves as legitimate possessors, by seeking to delegitimize any possession of nuclear weapons. Whilst India and Pakistan attended the humanitarian impact conferences, the nuclear-armed NPT States initially boycotted the forum (.pdf), dismissing the initiative as a diversion that would undermine other disarmament initiatives, and implying that it was unnecessary – as the terrible consequences of their nuclear weapons were already well understood. Documents show that the UK understood the forum’s implications as a challenge to the nuclear-armed States’ narratives. That the UK and US subsequently decided to attend the 2014 Vienna meeting arguably indicated the growing importance of the humanitarian discourse: its potential impact on the nuclear-armed States becoming more proximate, it had become necessary to engage with and could not simply be ignored. The non-attendance of all nuclear-armed States at this year’s OEWG (whose formation was a product of the humanitarian initiative) amid complaints about its inclusiveness (though the discussions are open to all states) can be seen as an attempt to undermine an effort that has real implications for their possession of nuclear weapons in the longer term.

Though the humanitarian initiative has arguably not yet had a great impact on domestic political discourse in nuclear-armed States, it is already creating tensions for the policies of some of their nuclear-dependent allies. In Japan for example, condemnation from civil society, parliamentarians, atomic bomb survivors and the Mayor of Nagasaki when the government did not sign on to a joint humanitarian statement in 2012 because of Japan’s reliance on extended nuclear deterrence led to a change in position and sign-on in 2013, with the contradictions in Japan’s national position on nuclear weapons exposed. Japan’s position in the global nuclear debate has been destabilized, with the US, UK and France abstaining on its annual General Assembly resolution on nuclear abolition in 2015 due to the inclusion of humanitarian language.

Growing support for the humanitarian initiative and revitalized debate has generated an expectation of action. Towards this, the Humanitarian Pledge, issued by Austria at the close of the Vienna conference in 2014, calls on States to take steps to “fill the legal gap” with respect to the prohibition and elimination of nuclear weapons and to “stigmatize, prohibit and eliminate nuclear weapons in light of their unacceptable humanitarian consequences and associated risks.” The pledge has been endorsed by over 120 countries, and was voted through the General Assembly as a resolution at its last session. A set of resolutions associated with the humanitarian initiative at the General Assembly in 2015 “substantively address concrete effective legal measures, legal provisions and norms that will need to be concluded to attain and maintain a world without nuclear weapons.”

Argumentation for a treaty comprehensively banning nuclear weapons (.pdf), with or without the initial participation of the nuclear-armed States, has developed alongside the humanitarian initiative. This would constitute an achievable, legally coherent and logical next step. Such a ban treaty would build on the existing legal regime and fill current gaps in the framework (.pdf) with respect to prohibition, providing legal clarity and increasing stigma against nuclear weapons. It would have a significant normative and practical impact through making a series of prohibitions, from possession to cooperation and financing, and including positive obligations such as victim assistance. Civil society including ICAN has played a role in encouraging such a treaty to be the initiative’s next step.

The commencement of negotiations on a legally binding instrument to prohibit nuclear weapons, which now has considerable support from a diverse range of states and regions, would generate significant attention that could begin to affect domestic political calculations in the nuclear-armed States, whether they join the treaty initially or not. In the longer term, these States would increasingly lose control of the narrative around nuclear weapons after the declaration of their illegality, with unpredictable political and practical consequences. Pushback against the humanitarian initiative from the nuclear-armed states and their allies has increasingly included anxiety about a ban.

With the OEWG soon to conclude and a resolution to commence negotiations expected to be proposed at the General Assembly in October, a number of non-nuclear-armed States are now seeking to channel the wide-ranging support and momentum built by the humanitarian initiative into concrete actions towards nuclear disarmament, with the encouragement of civil society. The leadership and outcomes of the humanitarian initiative rests with these States.