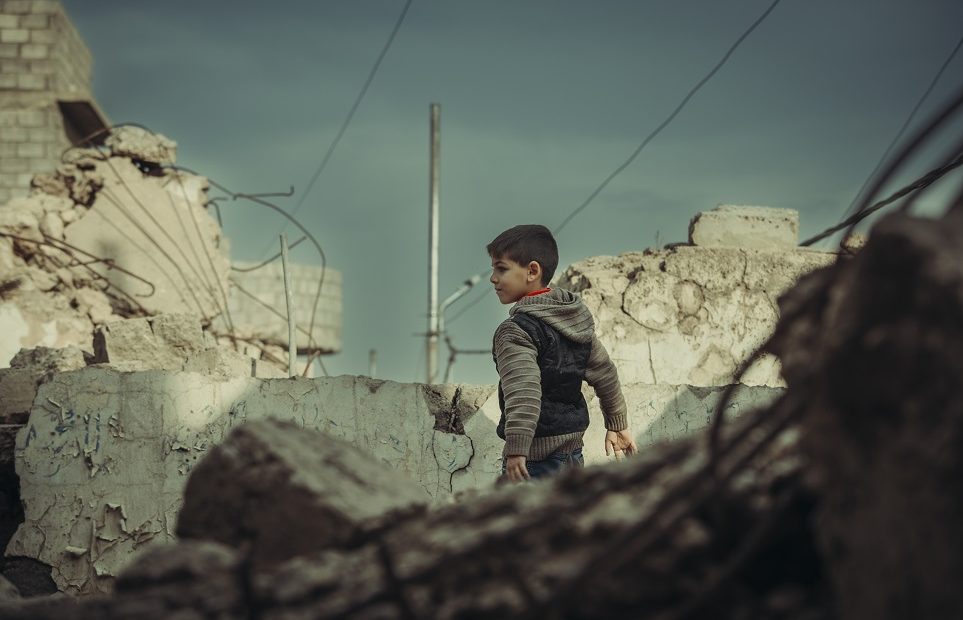 Silenced guns do not mend the lives of those who have survived the violence.  Declarations of victory and the laying down of arms do not by themselves restore electricity and clean water; nor do they reconnect families with their missing or detained relatives; nor do they diffuse unexploded bombs; nor do they offer protection from the violent retribution of the victors.

In this post, part of our series ‘IHL in the aftermath’, ICRC Senior Legal Advisers Ramin Mahnad and Kelisiana Thynne outline the reality that many people remain vulnerable to harm long after the fighting has temporarily or permanently ended, and propose that there are already legal solutions to many of these problems that must be identified and applied.

ICRC Humanitarian Law & Policy Blog · Silenced guns do not mend lives: what does the law say about human suffering at the end of conflict?

In the popular imagination, the end of armed conflict should bring relief and jubilation – people hugging in the streets, civilians returning to their homes, and soldiers returning to their countries. The reality, of course, is less bright. Life in the aftermath of a conflict – and each battle waged within it – is burdened with the devastation and insecurity wrought by the fighting that came before. The ICRC’s IHL in the aftermath initiative is working to draw attention to this precarious phase of fighting.

The culmination of a confrontation might reflect a clear military victory. Or it might be the result of a mutual ceasefire. Or it might just signal the conclusion of a day’s fighting. Whatever the outcome, one thing is for certain: any post-combat environment exposes civilians and persons hors de combat to ongoing harm and humanitarian suffering for which few wish to take responsibility.

In the wake of the storm

The aftermath of battles and conflict is often characterized by two contrasting – and potentially coexistent – situations: a fluid governance or security environment, which expose civilians and persons hors de combat to risks of violence, destruction of property, and other potentially devastating harm perpetrated by the authorities in control; and a relative calm during which certain measures are nonetheless critical for preventing needless death, destruction, loss, separation, and detention.

The aftermath in a region, city or neighbourhood often involves a shift in control over people and places. Victorious forces might find themselves with a new, uncontested power over a substantial population, often with real or perceived affinities to the adversary. They are often eager to assert (or re-assert) authority and restore law and order, sometimes imposing new forms of government or norms of behaviour. Even when there is no clear victor in battle – as in the case of a mutual ceasefire, for example – each side is likely to take advantage of the lull to further guarantee security and consolidate their authority.

The environment is likely to be tense. The aftermath often involves efforts to investigate and vet the population – whether of a village, neighbourhood, or IDP camp – for enemy fighters. These operations can be imbued with an atmosphere of retribution and suspicion, and the post-combat period is an opportunity to act ruthlessly not only toward the remnants of enemy forces, but also toward the civilians perceived as somehow sympathizing with those forces. Stigmatization based on real or suspected association with the adversary can give rise to a host of inhumane and unfair policies, often driven by overt or covert discrimination on racial, ethnic, religious or other grounds.

The law of armed conflict – or international humanitarian law (IHL) – sets out universally applicable rules that are vital in this fraught context. As far as IHL regulates the behaviours of parties to a conflict, it only applies in armed conflict. Although IHL in general stops applying once the armed conflict has ended, there are a number of provisions under IHL that will survive the end of the armed conflict, while some may become even more relevant. Following the heat of battle, the prohibitions of murder, rape and other sexual violence, torture, cruel or inhuman treatment, outrages upon personal dignity, hostage-taking, corporal punishment, mutilation, and experimentation, serve to outlaw acts that are foreseeable in the bleakest post-combat scenarios. IHL also deters overreaching or punitive restrictive measures against the civilian population and persons hors de combat. Likewise, the obligation to respect the property of IDPs, the interdiction of pillage, and the prohibition against destruction and seizure of property safeguard against familiar post-battle misconduct like looting, arbitrary requisitioning, and demolition or burning of homes. The prohibition of collective punishments and that of arbitrary detention would likewise prevent against a witnessed tendency to conduct mass arrests of the civilian population in the aftermath.

IHL also forbids other acts that would severely, maybe permanently, devastate civilian life. Forced displacement is prohibited with narrow exceptions; cultural property – buildings dedicated to religion, charity, education, the arts and sciences, and historic monuments– is protected against attack, endangerment, seizure and destruction; and religious practices and convictions must be respected. Moreover, the overall continued habitability of the territory is ensured by prohibitions against the destruction of the natural environment or the disabling of objects indispensable to the survival of the civilian population.

Perhaps the most obvious and essential preventive obligation in the aftermath is caring for the wounded and sick. Whenever circumstances permit, and particularly after an engagement, each party to the conflict must: without delay, take all possible measures to search for, collect and evacuate the wounded, sick and shipwrecked without adverse distinction; and ensure that they receive, to the fullest extent practicable and with the least possible delay, the medical care and attention required by their condition. This includes access to mental and physical health services and access to post-rape and other care related to sexual violence in armed conflict.

Civilians will likely have borne much of the hardship while hostilities were taking place around them. With the population often easier to reach after the fighting has subsided, the obligation to allow and facilitate rapid and unimpeded passage of humanitarian relief is especially important in post-combat scenarios.

Families are easily scattered during intense fighting, and IHL obligations in the aftermath operate to keep periods of separation as brief and free from uncertainty as possible. Relatives might lose contact for several reasons: death, injury, displacement or detention, to name a few. In all cases, IHL prohibits enforced disappearances, and it requires the parties to take all feasible measures to account for persons reported missing as a result of armed conflict and to provide their family members with any information they have on their fate. IHL expressly recognizes that at the end of the armed conflict a deliberate and thorough accounting of missing persons and efforts to reunite families must have already begun.

Where lives have been lost in hostilities, post-combat measures to ensure the dignity of the dead and their families are critical and time sensitive. To ensure that bodies are not left to decay, and that family members have an opportunity to recover the remains of their relatives, IHL requires – whenever circumstances permit, and particularly after an engagement – each party to, without delay, take all possible measures to search for, collect and evacuate the dead without adverse distinction, and to facilitate the return of the remains of the deceased upon the request of the party to which they belong or upon the request of their next of kin. More generally, the parties must prevent the dead from being despoiled, dispose of them in a respectful manner and respect and properly maintain their graves. With a view to the identification of the dead, each party to the conflict must record all available information prior to disposal and mark the location of the graves.

To the extent that civilians will have fled during the fighting, IHL acknowledges their right of IDPs to voluntary return in safety as soon as the dangers of combat or any other reasons for their displacement have ceased to exist.

The aftermath is also a decisive moment for detention. The end of a confrontation might mark the end of the conflict in its entirety, the end of a significant phase of the conflict, or some other significant change in the dynamic between the warring parties. As the conflict landscape shifts, deprivation of liberty that was once justified might no longer be necessary. It is therefore critical for the parties to recall their obligation to release persons deprived of their liberty as soon as the reasons for their detention cease to exist, and to provide the widest possible amnesties at the end of the conflict. Similarly, ‘all restrictive measures taken regarding protected persons shall be cancelled as soon as possible after the close of hostilities’ of an international armed conflict (IAC).

One of the challenges that most resonates with civilians in the aftermath is getting schools up and running again. Facilitating access to education, re-opening schools, effectively demobilizing children associated with the armed forces and de-militarizing schools is important to enable a return to some ‘normality’ for children.

Finally, at the end of active hostilities, IHL requires a range of measures to mark, remove or render harmless unexploded landmines, cluster munitions and other explosive remnants of war.

Among the rules set out here, only a few expressly refer to the end of a confrontation or conflict. The duration of internment in IAC, the search for and evacuation of the wounded and dead, efforts to find the missing, and dealing with explosive remnants of war are the sole categories of protections that are explicitly linked to the end of an engagement or the end of hostilities entirely. There are already a range of laws that apply in the aftermath. In some cases, there is simply the need to better implement them. In others, better preparation before and during the conflict will ensure greater application of existing laws and less human suffering. Yet, if there is to be a full accounting for and response to the range of humanitarian consequences in the aftermath of conflict, there is much more to the story.

Going forward, the ICRC aims to draw more attention to the specific vulnerabilities that arise in the aftermath of battles and conflict, and the rules of IHL that serve to address them. In doing so, we hope to strengthen awareness among warring parties (and others implicated) that fulfilling their responsibility to respect and ensure respect for IHL remains critical, even after the guns have gone silent.