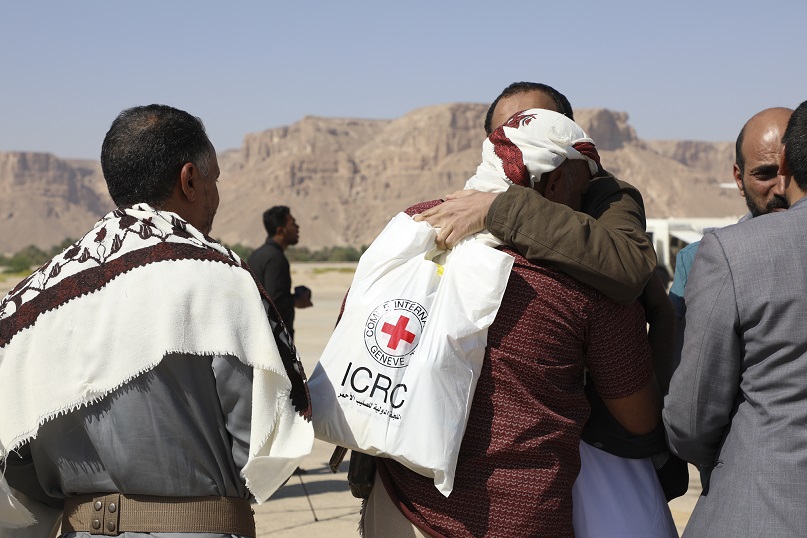 Sayoun airport. Sanaa, Yemen. Former detainees get off the plane chartered by the ICRC and reunite with family members. The ICRC’s role in the release operation was to act as a neutral intermediary in transporting the former detainees. ©Abdellah Alhebshi, ICRC 2020

In this post – part of our new series ‘Back to basics: humanitarian principles in contemporary armed conflict’ and released in tandem with Just Security – Fiona Terry, head of the ICRC’s Centre for Operational Research and Experience (CORE) explains her conversion from a neutrality sceptic to a genuine believer in the purpose and utility of retaining a neutral stance in war, based on first-hand experience.

I was for the affirmative. I argued that it was immoral to remain neutral when faced with genocide and war crimes – to do so was to put oppressors and their victims on equal footing. I argued that neutrality ratifies the law of the strongest, citing the angry cries of Bosnian Muslims in the 1990s that ‘we have no need of you, we need arms to defend ourselves…your food aid and medicines only allow us to die in good health.’ I pointed to the incompatibility of MSF’s efforts to stop atrocities through public denunciation while respecting neutrality’s requirements to ‘refrain from controversies of a political or ideological nature;’ and I argued that the true measure of neutrality was its acceptance by both sides of a conflict, which is very hard to assure. At least on this last point I was right: perceptions of neutrality are indeed hard to assure, made even harder now by the role of social media in fanning flames – often based on misinformation – in an increasingly polarized world.

For the other points I was not right, as I realized a few years later while working for the ICRC in Myanmar and then conducting a two-year internal study on the ICRC’s practice of neutrality in Sudan and Afghanistan.[1] I realized that I had misunderstood the function of humanitarian neutrality, despite it being clearly stated in the principle’s wording. The ICRC does not take sides in hostilities or engage in controversies for a reason: ‘to enjoy the confidence of all’. This is not a moral position but an operational posture that aims to facilitate access to people in distress on both sides of a front line. By being perceived as unbiased towards adversaries, the ICRC aims to gain their trust and acceptance so that they allow the organization to operate effectively and safely in the territory they control. By consistently considering the ways that words and actions might influence perceptions of neutrality, the ICRC tries to avoid giving belligerents a pretext to refuse, block or hinder its work. It is never easy. Access is often blocked. But to abandon neutrality would be to abandon the possibility of conducting some truly remarkable acts of humanity amid the inhumanity of war. Humanitarians cannot stop war, only political leaders can do that. But we can prevent and alleviate some of the most appalling consequences of war and for that we need to be trusted and respected by all sides.

So, no, adopting a neutral posture does not confer moral equivalence on perpetrators and their victims. Instead, it opens avenues to help the latter, like during the genocide in Rwanda. At that time, ICRC and MSF teams worked together in a makeshift hospital in Kigali, trying to save the wounded. Every day, the head of the ICRC’s team, Philippe Gaillard, took an ambulance out to see if he could save anyone still breathing, but had to cross roadblocks manned by murderous militias to regain the hospital. At each checkpoint Philippe got out of his vehicle and sat with the killers to try to convince them to let him through. Sometimes he succeeded. He kept his horror and revulsion to himself for the sake of those inside the ambulance and spoke politely to the killers. Some critics imagine that it is enough to be bestowed with a mandate to help the casualties of war for this to automatically happen. But it is not. Every attempt to rescue victims of war requires the agreement of the authorities controlling the territory. Humanitarians must be persuasive, tenacious, brave, and capable of dealing with those ‘in charge’.

Remaining neutral is hard, perhaps harder than choosing sides. And the very possibility of being accepted as neutral has been thrown into question, particularly in the wake of the 9/11 attacks on the United States and the ‘war on terror’ that followed. The US decree that ‘you are either with us or with the terrorists’ was strongly felt by our field teams as they tried to help Afghans on both sides of the front-lines and visit suspected Taliban arrested by Coalition and Afghan Government forces to ensure they were treated humanely. The negation of a neutral space was felt most sharply when an ICRC water engineer was shot dead in March 2003, and further amplified by two attacks on the ICRC in Baghdad a few months later. But after much soul-searching the ICRC did not bow to critics and abandon its attempts to forge a neutral role with all sides. It persevered in demonstrating its humanitarian concern for all those caught up in armed conflict and earned if not respect at least begrudging acceptance that having a neutral intermediary in war has its uses.

All sides in a conflict benefit from the ICRC’s neutral stance. It facilitates the crossing of front lines to deliver life-saving humanitarian assistance. It facilitates visits to detainees held by both sides, their registration, and notification of their status to their loved ones. It permits the ICRC to recuperate the mortal remains of the dead so they can be returned to their families for a proper burial. It allows for a role in the release or exchange of prisoners or hostages, and it opens space to discuss adherence to international laws and norms on the way wars are fought. Contrary to what I previously believed, neutrality does not impose silence on the ICRC; rather, it creates the space to discuss with those directly responsible for breaches of IHL. The ICRC does so behind closed doors, in bilateral, confidential discussions. Allegations are presented and accountability sought – actions do not have to be posted on Twitter to actually occur. And public discretion is sometimes demanded by the belligerent parties themselves, perhaps not wanting it known that they agreed to comply with the law. Our confidentiality does not equal complacency and it isn’t unconditional. But we prioritize meeting face to face with those giving the orders and holding them directly accountable. The ICRC uses public communications to support its bilateral work, raise awareness of IHL and explain our principles. And we do sometimes publicly denounce parties for their conduct in wartime, but only when all avenues for persuasion are exhausted and when it in the interests of the victims to do so.

Humanitarians face a host of dilemmas when trying to alleviate the suffering of people caught up in armed conflict and must make hard choices when balancing the potential benefits and harms of aid. Taking a neutral stance resolves none of these dilemmas. But it does provide a logical and consistent thread to all that the ICRC does and says. Consistency is vital in building trust – who can trust an organization which veers from one position to another with the winds of public sentiment? Neutrality is not the opposite of ‘solidarity’, but a way to render this noble sentiment actionable. MSF realized this 20 years ago and I was on the losing side of the debate: neutrality remains inscribed in MSF’s charter.