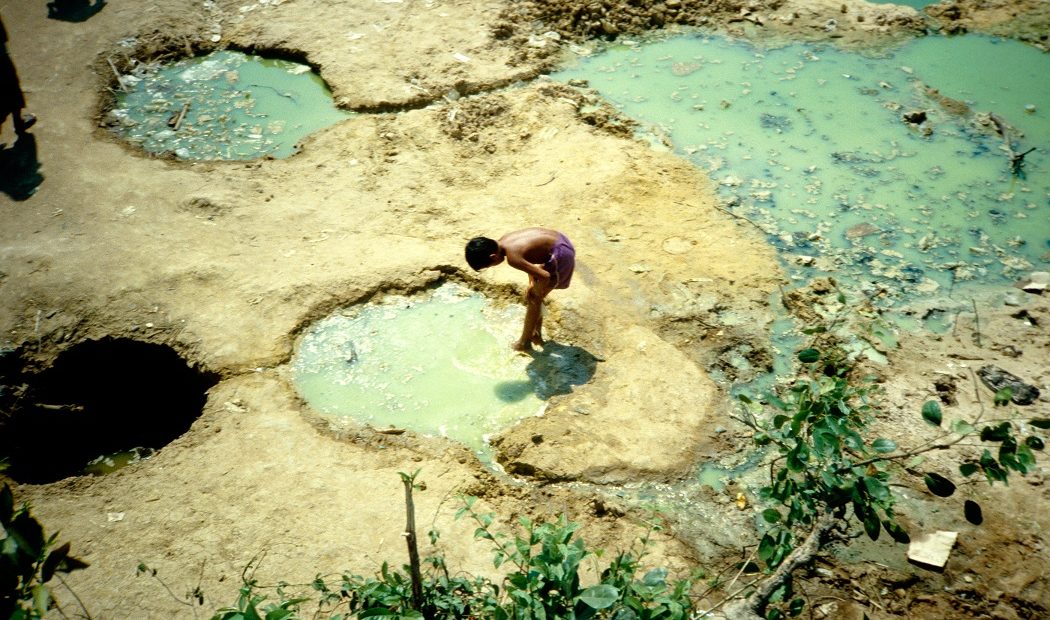 The International Law Commission’s long-running project to codify and progressively develop the legal framework protecting the environment in relation to armed conflicts is nearing completion. But the process is unlikely to conclude in a treaty. Because of this, States, with the support of civil society and other actors, will have a vital role to play in ensuring the framework is implemented, and a decade’s gains are further solidified. This post, which is part of a series on war, law and the environment co-hosted with the Conflict and Environment Observatory (CEOBS), looks ahead to what should come after the Commission’s draft principles are adopted in 2022. In it, CEOBS’ Doug Weir and Stavros Pantazopoulos examine the vital role that civil society organizations can play in promoting and strengthening implementation of norms, encouraging State engagement on environmental protection, and monitoring implementation.
ICRC Humanitarian Law & Policy Blog · If not us, who? How States implement the legal framework protecting the environment from conflict

The last 15 years have seen significant developments in the legal framework protecting the environment in relation to armed conflicts (PERAC). In addition to the 28 draft principles (DPs) adopted by the UN International Law Commission (ILC) during its 2019 session, the ICRC published an updated version of its 1994 Guidelines on the Protection of the Natural Environment in Armed Conflict in September 2020, setting out existing international humanitarian law (IHL) rules on this topic. Other legal initiatives have addressed water in conflicts, and the humanitarian consequences of conflict pollution, resulting in 2019’s Geneva List of Principles on the Protection of Water Infrastructure and 2020’s principles on victim assistance for those affected by toxic remnants of war.

The environmental dimensions of armed conflicts have also risen to the forefront of the international agenda, with the passage of resolutions in the UN Environment Assembly (UNEA) in 2016 and 2017,[1] and ongoing debates on climate and water security, and environmental damage and conflict in the UN Security Council. This emergent environment, peace and security agenda is also evident in peacekeeping, peacebuilding, humanitarian assistance and mine action, all of which have seen efforts to mainstream the protection of the environment.

Together, these processes have created momentum. And, time and again, our experience advocating for stronger respect for the legal framework has demonstrated the value of processes that allow States and civil society to interact. These are processes that must continue, and grow. The planet faces the triple crises of climate change, biodiversity loss and pollution. This demands efforts on all levels to help protect and restore the environment, particularly in areas affected by armed conflicts and insecurity.

However, because the ILC’s PERAC draft principles will not form the basis of a new international binding instrument, there is a risk that they will become orphaned. If these are to change the behaviour of States and non-State actors, there is an urgent need for a vehicle that promotes and monitors the implementation of the draft principles and helps sustain the existing momentum.

CEOBS examined the options for such a vehicle, with financial support from the governments of Finland and Norway, which would ideally support the implementation and raise awareness of not just the ILC’s work but also the wider normative landscape described above. But before introducing our findings, it is worth exploring other ways that civil society can contribute to strengthening the implementation of PERAC norms and principles.

Civil society and strengthening respect for norms and principles

Civil society organizations have a significant role to play in ensuring that PERAC norms and principles, and especially the ILC’s DPs, are upheld. It is our responsibility to advocate for their implementation and demonstrate their potential to States and other actors. We need to advocate on behalf of the environment, and on behalf of those who depend on it.

This work could take a number of forms. One that has proved to be profoundly important is monitoring and data collection on the environmental dimensions of armed conflicts. Just as with the monitoring of human rights violations, the civilian impact of means and methods of warfare, and compliance with IHL, new technologies have created new opportunities for data collection. Given that the environment does not tend to be the priority in the context of conflicts, the gains from improved monitoring and visibility are proportionately greater. It is data and knowledge on environmental harms, and their associated humanitarian consequences, that have informed norm development.

With data and knowledge, comes the potential for knowledge sharing and awareness-raising, including on the obligations of parties to a conflict under IHL (e.g. ICRC Guidelines on the Protection of the Environment, Rules 7 and 8). Knowledge sharing is another crucial role for civil society, whether done in the context of conflict monitoring, or in underpinning the growth of communities of practice dedicated to research and policy development, or when providing advice to States, researchers or the media.

Civil society can also champion specific norms and principles. For example, environmental restoration and sustainable resource management should be part of peace processes and included in peace agreements; the focus of ILC PERAC draft principle 23. Civil society can encourage States to ensure that they are, and monitor the effectiveness of the policies implemented to achieve this.

Measures to promote norms and principles as well as to improve accountability could and should go further than awareness-raising and knowledge sharing. The UN Environment Programme’s 2009 study that triggered much of the subsequent work around the legal framework found that: ‘There is a lack of case law on protecting the environment during armed conflict because of the limited number of cases brought before the courts’. This remains the case today, and civil society could help strengthen PERAC by bringing these issues to the attention of (quasi-) judicial institutions; whether they are domestic, regional, or international, such as the International Criminal Court.

While the role of civil society in monitoring harm or pursuing accountability is often critical, it is equally important to highlight the instances where State or non-State actors actually comply with their international obligations. This approach seeks to foreground a positive narrative of implementation, instead of focusing exclusively on violations of the normative framework, and to thus encourage better respect for these rules.

One further role for civil society, and one where we have sought to play our part, is to support the promotion of PERAC norms and principles in international fora beyond the UN General Assembly Sixth Committee. Whether in the context of the UN Environment Assembly, Human Rights Council or World Conservation Congress, every resolution or motion increases awareness of the PERAC landscape, and can engage new constituencies. This is particularly beneficial in light of the broad thematic scope of the draft principles, which cover everything from business and human rights, to obligations during occupation, and the unintended environmental consequences of human displacement.

Nevertheless, States remain the primary international law-makers and enforcers; they are responsible for respecting obligations. While civil society and international organizations have their role in stimulating the interest of States in PERAC, and pushing for respect of obligations, States remain the key actors in this domain. And naturally it is States that are the focus of our proposal for PERAC implementation, although non-State armed groups also have clear obligations under IHL in armed conflicts.

The ILC has played an important role in mapping and progressively developing PERAC norms and principles, in what could be viewed as the first part – among others – of a longer journey to reduce environmental and humanitarian harm. To then not operationalize its outputs, following their expected adoption on second reading in 2022, would undermine this longer term objective.

An implementation database akin to those on IHL seemed a logical place to begin. Its purpose would be to provide an ongoing and transparent register of the state of implementation and, in so doing, provide a foundation of knowledge on practice for many of the activities detailed in the previous section. However, we were immediately faced with the question of whether we could use all 28 draft principles as benchmarks for conduct.

To answer this, we examined the extent to which PERAC norms and principles are already part of the practice of States. We undertook reviews of the United Kingdom and Canada’s PERAC practice, before, during and after armed conflicts, including during occupations. Predictably there was considerable variation, and it was immediately apparent that the heterogeneity of States and their military postures would make direct comparisons between States difficult. For example, how do you fairly judge the occupation practice of a State that has never been an Occupying Power? Furthermore, the draft principles are a blend of codification and progressive development of international law; how then to assess conduct and distinguish between obligations and good practice?

As one of the rationales for a PERAC database is the ability to rank the environmental performance of States, and in so doing improve transparency, and create the space for dialogue, it was important for its benchmarks to be as universal as possible. Our solution: to develop a bespoke set of goals and indicators informed by the draft principles. Such an approach would also provide space to integrate the norms, recommendations and good practices in the other components of the PERAC normative landscape, including the ICRC Guidelines and the existing IHL rules therein, the Geneva List, and the principles on assisting victims of toxic remnants of war. Throughout, the primary focus of the goals would be enhancing the protection of people, and the environment.

There is nothing particularly novel in such an approach, but there are risks. The primary one is of perceived legitimacy. To avoid this, the goals and indicators should be developed in a transparent process involving all the key stakeholders: States, legal and environmental experts, and civil society. The success of the project will be dependent on engagement and this developmental process will enshrine that from the outset. Indeed, the project is intended to create and sustain dialogue. One of the most important outcomes of the ILC’s work, and its annual debates in the UN General Assembly Sixth Committee, has been the way it has encouraged engagement from States. In turn, this has created space for dialogue between States and civil society. It is this dialogue, as much as the improvements in environmental performance, that an implementation vehicle should encourage.

It is expected that the draft principles will be adopted by the UN General Assembly in autumn 2022, and we encourage States to welcome them in the resolution that does so. We would also encourage any States that have yet to do so to submit their written comments on the PERAC draft principles to the ILC before the end of this month. The draft principles and their commentaries are of significant importance, but could be strengthened further in some instances, as our joint analysis with civil society partners has identified.