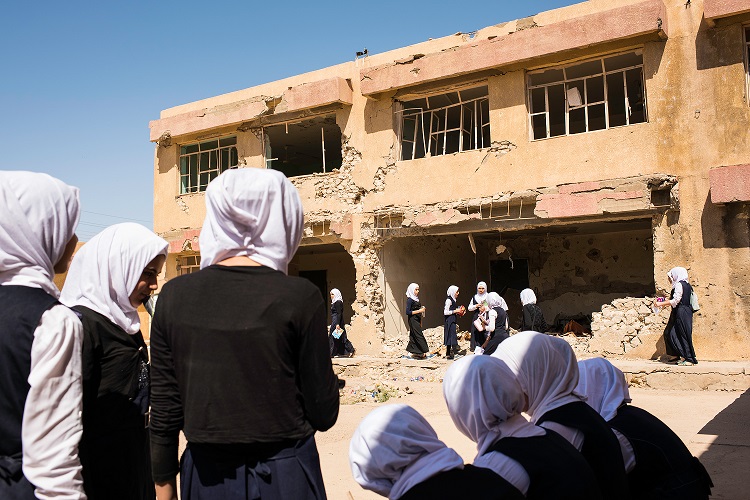 This week, the ICRC and the IFRC held a side event on education at the 33rd International Conference of the Red Cross and the Red Crescent, launching the pledge ‘Addressing education-related humanitarian needs‘. The past three years have been an exciting and thought-provoking journey for the Red Cross and Red Crescent Movement on the question of education. Strong momentum and commitment have been built, without shying away from critical and legitimate questions and dilemmas around how neutral, impartial and independent actors can support education meaningfully and without jeopardizing humanitarian principles.

When the ICRC developed its first ever Framework on Access to Education in 2016-2017, many observers must have thought: “it’s about time”. Education had by then been fully integrated into the global humanitarian response for over a decade. ICRC delegations in various contexts had already been supporting access to education, responding to a need and priority expressed by generations of communities affected by conflict and violence.

Despite the clear demand, some feared that by strengthening its role around education, the ICRC might be encroaching on ‘development’ work, going beyond our traditional capacities and expertise. In protracted conflicts where we operate, children struggle to get an education mainly because education systems are severely and chronically under-resourced, both financially and technically. With this as a backdrop, how can humanitarian action supporting education in these contexts make any meaningful impact?

Some also feared that, by bolstering our work on education, the ICRC would be venturing into a highly political terrain. In many places, education is part and parcel of conflict dynamics and the target of attacks. How can a humanitarian actor support education in conflict zones without jeopardizing its neutrality, impartiality and independence?

Drawing from the rich exchange that has taken place over the past three years within the ICRC, the broader Movement and with our peers, including during an event co-organized by the ICRC and Education Above All Foundation last June, I’d like to share three reasons why education needs the support of neutral, impartial and independent humanitarian actors, especially in conflict zones:

#1 Because education continues during conflict, including near frontlines

During armed conflict, day-to-day life often carries on, even near the frontlines. Sooner rather than later, communities seek to resume education for their children, as part of their efforts to rebuild and move on with their lives.

In the east of Ukraine, for instance, many communities suddenly found themselves living next to a line of contact hundreds of kilometers long between government- and non-government-held areas. Initially, children followed classes from home, since schools were closed due to their proximity to the contact line. Over time, however, as the intensity of the fighting subsided and the contact line remained, life in these new ‘frontline communities’ had to regain some form of normalcy, as safely as possible. To this end, ICRC teams worked closely with school communities and education authorities to make schools safer. This included the creation of new evacuation routes, rehabilitation work on the premises and delivery of risk awareness and safer behavior sessions to children and teachers. It also included a dialogue with parties on both sides of the contact line to reduce the risks for civilians, including nearby school communities. This was a dialogue based on international humanitarian law (IHL) – a body of law which affords special protection to children in times of war and which prohibits attacks on civilians and civilian objects.

This body of law also contains rules that specifically protect access to education, requiring parties to conflict to facilitate this access in times of war. In keeping with the institutional Framework on Access to Education, this year the ICRC’s report on International Humanitarian Law and the Challenges of Contemporary Armed Conflicts – submitted every four years to the International Conference of the Red Cross and Red Crescent – dedicated a specific focus to how IHL protects access to education.

In complement to these IHL obligations, in past years a global effort has been taking shape to help education carry on in frontline areas by preserving the civilian character of schools and consequently their protection under IHL. The Safe Schools Declaration and the Guidelines for Protecting Schools and Universities from Military Use during Armed Conflict outline a set of commitments and practical measures to reduce the use of schools for military purposes, such as barracks, training grounds, fighting positions, weapons storage facilities, or detention and interrogation centers – a common feature in conflict areas around the world.

There is no specific treaty or customary IHL rule prohibiting the use of schools for military purposes. The effect of this under IHL is that a school can lose its civilian character and become a military objective. In the ICRC’s view, taking practical measures to avoid using schools for military purposes, even if not a legal obligation, is a choice that goes a long way in ensuring the continuity of education on frontlines and, importantly, the safety of civilians – students and education personnel. For this reason, on several occasions, the ICRC has engaged with parties to the conflict to get them to vacate schools or to keep a safe distance from a school perimeter so that schools can function as safely as possible. We also stand ready to provide technical advice to all interested parties regarding how to best implement the Guidelines on the military use of schools in specific contexts, mentioned above.

#2 Because education can be politicized during conflict

It may seem counterintuitive, at first, but the fact that education can become politicized during a conflict is precisely the reason why neutral, impartial and independent actors need to step up. Humanitarian principles were not designed to guide action in consensual environments. Neutral, impartial and independent action is needed most where there is division and fragmentation.

For example, during the civil war in Sri Lanka and Nepal, neutrality was a key principle used in efforts by communities to reduce school closures, to prevent the presence of arms bearers inside and around schools, and the misuse of schools by political parties. The “Schools as Zones of Peace” approach initiated by Save the Children, UNICEF and numerous locals NGOs was centered on a process of dialogue between school communities, authorities, arms bearers and political parties. The outcome was the development of public Codes of Conduct with ground rules for keeping schools off limits for political and military activity. Time and time again, a key success factor was the ability of affected communities, when supported, to persuade political stakeholders to place education in a neutral space, above politics; a clear humanitarian approach.

Politics also affect access to education through administrative, academic, social or financial barriers, which can exclude certain individuals, communities or groups sometimes deliberately, sometimes unintentionally. Who better than a humanitarian actor to spot these cases of exclusion and to promote a more inclusive access to education, based on the principle of impartiality?

Lastly, the trickiest point of the politics around education: education is information. It is one of the strongest vehicles for the transmission not only of knowledge and skills, but also of a view of society, history, values, principles and ideologies. This is true in every country in the world. Where conflict has hit, however, education can be instrumentalized to transmit certain societal views and become divisive, contested by some and supported by others.

In the face of a non-consensual curriculum, it can be tempting for a neutral, impartial and independent actor to take a blanket approach and consider education off limits in its activities, but there are tools out there to help us navigate these situations, for instance conflict-sensitive education methodology, or the ‘4As’ Framework, which provides basic criteria for analyzing the educational environment objectively, including the politics surrounding it. More importantly, however, we have to consult communities. What do they think? What do they want? How can we support them?

The bottom line is that decisions on whether to support access to education in politicized environments should not rest on a presumption of risk in relation to humanitarian principles nor on our own subjective views about what education should be provided, or of how long education ‘can wait’. These decisions need to be based on a context-specific analysis, using objective tools, and, most importantly, giving due weight to the view of communities.

#3 Because education is urgent

Earlier this year, I visited communities who had recently moved within an opposition-controlled area of South Sudan. It was April and you could smell the approaching rains in the air. The women were quickly building ‘tukuls’ to shelter their families, a food drop was imminent nearby, and the men were trying to secure seed donations for planting season. Meanwhile, the community set up classes under a tree. The teachers were the few adults who had themselves received some education, as former refugees in neighboring countries. Hundreds of children’s names were meticulously registered in notebooks, organized according to estimated knowledge levels, and a schedule of class rotations was put in place to make use of the three blackboards that the community had somehow managed to find.

If communities set up makeshift schools while they are still building their own homes and preparing for food drops, who are we to argue that education can wait? The ICRC certainly could not, and so we have stepped up to help communities in hard-to-reach areas of South Sudan to have an education against all odds. We are doing so by using the expertise we already possess (protection dialogue, infrastructure rehabilitation, livelihood support), and seeking partnerships to bring in the expertise we don’t (actual education delivery).

Here, again, humanitarian actors have a unique role to play because of their proximity and their sustained presence alongside communities affected by conflict. When education systems have collapsed or are chronically under-resourced, alternatives need to be supported to reduce the amount of time that children go without education. This needs to be done at community level, while building links and coherence with the formal education system.

Proximity to communities is key, and the past three years have been eye-opening for us all in the Red Cross and Red Crescent Movement, seeing all that National Societies already do for education at community level. For instance, a survey conducted by the IFRC revealed that National Societies run education facilities at pre-primary, primary, secondary and tertiary level in 80 countries. They have also provided material and administrative support in 76 countries, for instance by rehabilitating education facilities, distributing education supplies or meals, carrying out education-related cash programs, providing safe transportation services, or tracing education-related documents for displaced people.

The lack of a functioning education system should not paralyze humanitarian actors. On the contrary, it should spur them into action because they are uniquely placed to respond to the urgency of ensuring the continuity of education. For girls, in particular, seizing the window of opportunity for education is crucial, because they face more and more pressures and barriers as they reach adolescence.

Because education cannot wait for systems to be strengthened, we need the speed and proximity of humanitarian actors to reduce the education gap in the meantime, directly at community level.

Because life goes on even at frontlines, we need humanitarian actors to help make going to school possible and safer.

Because the politics around education can intensify during armed conflict, we need humanitarian actors to support communities in their efforts to put education back where it should be: a basic right, not a political weapon or a bargaining chip.