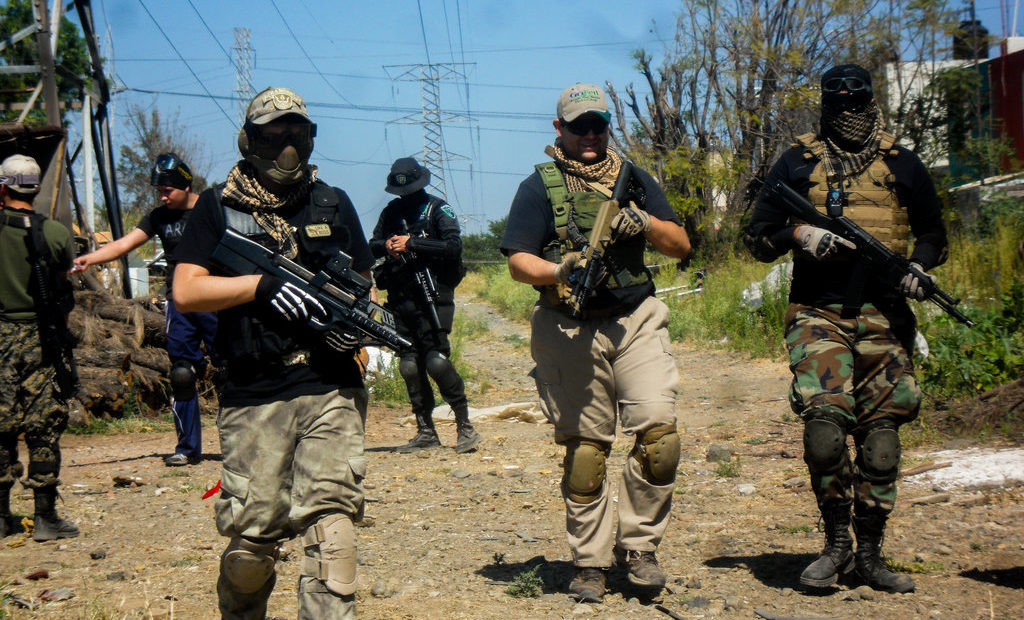 For centuries, private contractors have been used in warfare. Their involvement in armed conflicts rose substantially in the early 2000s, triggering important legal questions and humanitarian challenges. As a result, Switzerland and the ICRC launched a joint initiative resulting in the Montreux Document on pertinent international legal obligations and good practices for States related to operations of private military and security companies during armed conflict (the Montreux Document). Finalized exactly 10 years ago, this document addresses the legal and practical challenges in regulating the use of private military and security contractors (PMSCs or PMCs). Today, the Document remains just as important as it was in 2008.

While PMSCs no longer dominate the spotlight in the way they did 10 years ago, reports continue to emerge about the recent or future use of private contractors in armed conflicts—such as in Syria, Afghanistan, Yemen or Nigeria. The services that PMSCs provide today vary widely, as do, presumably, the reasons forhiring them. The latter range from cost saving arguments to the need for specific expertise, and arguably include the possibility of operating in an armed conflict without leaving an official government ‘footprint’.

Whatever the services or reasons for hiring private contractors, the Montreux Document conveys a simple message: International law contains a number of obligations that bind States in their relationships with PMSCs. It does not allow States to circumvent their obligations by outsourcing certain activities to private actors. This holds true not only in armed conflict but at all times.

The use of PMSCs in today’s armed conflicts

Reportedly, in some contexts PMSCs are also hired to provide military services in actual combat operations.

From a humanitarian point of view, the use of PMSCs in armed conflict can raise concern. This is the case, for instance, if companies operate without clear rules on the use of force; if they lack adequate training on international humanitarian law and other applicable law; and, if the States involved do not ensure effective accountability for any violations of the applicable law.

In the early 2000s, the increasing use of PMSC was accompanied by the misperception of a gap in international law governing these companies, which some understood to mean that they operated in a sort of ‘legal void’. The Montreux Document makes clear that no such gap exists.

In its first part, the Document recalls pertinent legal obligations of States and of international organizations, PMSCs and their personnel. PMSCs may be incorporated in one State (‘home State’), their services hired by another State (‘contracting State’) and their operations conducted in yet another State (‘territorial State’). To address the complexities that flow from this state of affairs, the Document recalls pertinent obligations for all three types of States. Drawing on international humanitarian law as well as on human rights law and international criminal law, the Document reaffirms obligations these bodies of law provide for States in relation to PMSCs. The source and extent of obligations may vary according to whether a State is a ‘home’, ‘contracting’ or ‘territorial’ State. Three broad sets of obligations can be identified, namely:

The Montreux Document also recalls that States are responsible for wrongful acts committed by private contractors if they are integrated into the armed forces of a State; form part of a group or unit under a command responsible to the State; are empowered by law to exercise elements of governmental authority; or act, in fact, on the instructions of the State or under its direction or control.

The Montreux Document was primarily developed in view of PMSC operations that take place during armed conflict. However, pertinent obligations other than those based on IHL are also relevant with regard to any use of PMSCs, including, for example, in the maritime sector.

In its second part, the Montreux Document presents a number of good practices. These practices aim to provide guidance to States on how to ensure respect for international humanitarian law and human rights law. More generally, they promote responsible conduct in the relationship between States and PMSCs. They set out a blueprint on how States can effectively regulate PMSCs. Their value extends beyond situations of armed conflicts.

In 2014, Montreux Document participants established the Montreux Document Forum. The Forum’s objectives are to facilitate national implementation of the Montreux Document and to coordinate outreach to States that are not yet supporting it. The Forum aims to strengthen dialogue on lessons learned, good practices and challenges related to the regulation of PMSCs. Moreover, it provides States with concrete guidance for how to regulate PMSCs under domestic law and how to ensure responsible contracting.

Looking back at the progress made since the Montreux Document was finalized in 2008, we observe that the humanitarian objectives of the Montreux Document have been significantly advanced. The Document has raised awareness on States’ obligations in relation to the operations of PMSCs and on the importance of adopting and implementing adequate domestic legislation. Today, the argument that PMSCs operate in a legal void is no longer heard.

Still, for the foreseeable future, it is likely that States and other actors will continue to hire PMSCs to provide various services in armed conflicts and in other situations of violence. Entrepreneurs will propose their services to ‘resolve’ contemporary crises. Corporations as well as international or non-governmental organizations will hire security services when operating in areas where States are unable to provide adequate security. And, States will turn to the private sector to acquire manpower and expertise, including with regard to cyber security. The Montreux Document provides important guidance on the legal framework applicable to PMSC operations and offers States the knowledge, good practices, and certain tools to remain in the driver’s seat and live up to their responsibility to ensure respect for applicable international law.