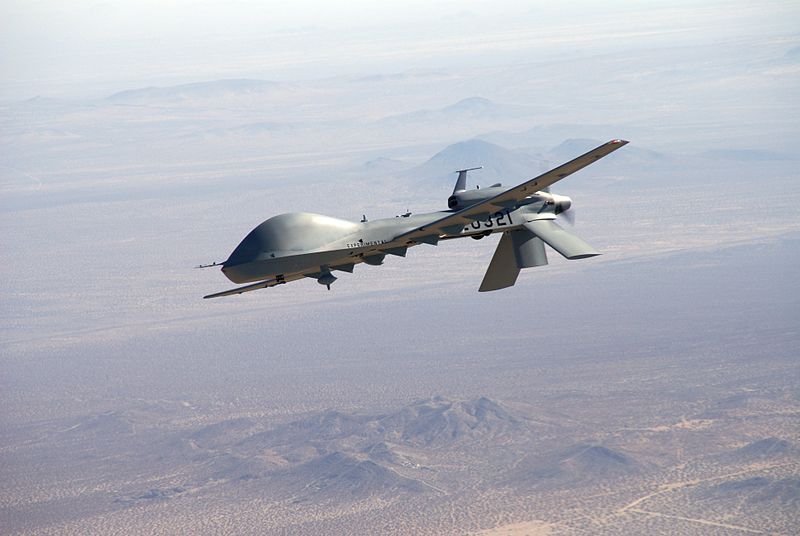 In this blog post, I look at the ethical and legal ramifications of distance in armed conflict. What does it mean to target someone or something at a distance? And why does this matter ethically and legally? Undoubtedly, ever since the invention of the bow and arrow, belligerent parties have searched for methods to increase their distance from the battlefield while retaining, and perhaps even improving, their capacity to attack the enemy. Over the centuries, the desire to maximise distance and yet remain an active force in theatres of war has driven the development of weapons technology as well as military strategy. It has also led to a sense of unease among the public, campaigners, social movements, as well as some politicians.

By way of anecdote, in the 1980s, a colleague from a well-known British NGO attended a London rally organized by the Campaign for Nuclear Disarmament (CND) only to spot, oddly enough, a rather intimidating member of a notorious biker gang among the demonstrators. The biker, it turned out, was enraged by the fact that missiles stationed on one of the four Trident nuclear submarines, the UK’s nuclear deterrent, could kill millions of individuals at the push of a button. Not that the biker was opposed to killing. Far from it: killing, he insisted, had to be done ‘properly’—not by pushing a button, but man to man, and preferably by hand.

Fortunately, one does not need to don leathers in order to express concerns about distance in armed conflict. To many observers, in recent years, the drone operator, safely seated in a cubicle located thousands of miles away from a theatre, has become an enduring symbol of distance in warfare. The prospect of autonomous weapon systems (AWS) that, once programmed, can engage and destroy a target without intervention from a human operator has raised further questions about ever greater distancing in armed conflict. For, while the drone operator will see his target, as well as the aftermath of his actions, the person who programmes an AWS will not.

Of course, it is one thing to register one’s uneasiness about ‘killing at a distance’; it is quite another to pin down on what grounds distance could be problematic. Is it legally problematic, or morally? Is distance a strategic problem, or a technological one? And so on. Upon further reflection, it may even turn out that killing at a distance is not problematic at all: our intuitions could simply be misleading.

The difficulties surrounding these questions are compounded by the elusiveness of the concept of distance. For there are at least four overlapping yet distinct senses of the term:

Now, these four forms of distance are relevant to the law as well as ethics, though not necessarily in the same way.

From the perspective of international humanitarian law (IHL), what matters ultimately is that during armed conflict distance does not undermine respect for, and compliance with, the key legal criteria of distinction, proportionality and precautions (in cases where harm affects non-combatants and civilian objects), and with the principle of military necessity. If these (and any other relevant legal) criteria are fulfilled, distance in and of itself, however it is conceived, does not pose a problem for IHL. For example, the fact that the application of force to a target is the outcome of a long and complex causal chain does not matter if it does not violate IHL. If, on the other hand, the geographical distance between a drone operator and his target increased the operator’s psychological distance from the battlefield, thereby motivating him to intentionally target non-combatants, distance is clearly a legal issue. However, the fact that a drone operator is located thousands of miles from his target is in and of itself of no relevance to IHL.

That said, causal distance, in particular, poses a longstanding challenge to IHL. As I just said, causal distance is irrelevant if no violations occur. But problems may arise when they do. True, there are many reasons for why it is hard to prosecute such crimes—lack of cooperation by States is surely among them. The deeper reason, though, is that if the causal chain that led to a war crime is particularly long and complex, it may diminish individual (criminal) responsibility for that crime. For one thing, it may become difficult to determine who has done what. And even if it was possible to do so, none of the many agents who acted within the causal chain may have contributed enough to be held responsible for the resulting war crime. Everyone, in other words, does a little bit to contribute to the crime but not enough to be held responsible for it.

Interestingly, these worries about the effects of (causal) distance on the ability to hold individuals responsible for what they have done are also shared by ethicists. If we truly care about the moral rights to life, liberty and property held by human individuals, we must be able to hold those who violate these rights responsible for their deeds. We morally owe it to the victims of rights abuses to do so. From the ethical perspective, the intentional or non-intentional use of distance to obscure responsibility in armed conflict signals a deeper disrespect for individual rights, and by extension the moral standing of the individual as a being who is owed equal moral concern and respect.

Moreover, causal and temporal distance, in particular, are ethically relevant in the sense that they make it difficult to change one’s mind about killing. The decision to kill another human being is one of the gravest decisions one can ever make. It is precisely because this decision is grave, and precisely because human life is valuable, that there should be the opportunity to reconsider it, even if, from a legal perspective, the individual to be killed is a legally legitimate target. This is not to say that one should always err in favour of life. To use a domestic example, it is morally wrong not to shoot a hostage taker who is threatening a small child. But at least the opportunity to reconsider one’s decision should be preserved. This is, I believe, a strong moral argument against the development and deployment of weapons with automated kill chains.

Furthermore, war is a human activity and, as such, gives rise to complex webs of formal and informal relationships between individuals, even if they are members of opposed political communities. In his magisterial work, Just and Unjust Wars: A Moral Argument with Historical Illustrations, the American political theorist Michael Walzer mentions the case of ‘naked soldiers’, who are unable to defend themselves and do not currently pose a threat. The shared experience of human vulnerability during armed conflict, Walzer argues, has given rise to violence-restricting norms, namely norms not to kill naked soldiers. With the use of technologies that increase geographical distancing from the battlefield, one wonders, from an ethics perspective, whether such norms can survive or whether similar norms may arise in the future. Unlike soldiers on the battlefield, drone operators and their targets are not in the same boat. Far from ushering in an age of more humane warfare, the introduction of new, distance-enhancing combat technologies may, in reality, undermine more informal violence-restricting norms.

Finally, what, ethicists may wonder, does the need for distance tell us about societies that use military measures? How can it be morally justified to impose the significant costs associated with armed conflict on others while shielding oneself from its effects? Probably the biker at the CND rally did have a point: how can one say that wars are fought as a contest between military powers if killing a large number of members of another State merely requires pushing a button? Surely, States, their representatives would be quick to interject, owe it to all their citizens, including those in uniform, to reduce any risks for them. It is hard to take issue with this claim.

Yet, the challenges posed by the various forms of distance found in armed conflict necessitates some introspection, if not a change in perspective. Even if new combat technologies render individuals and communities in armed conflict ever more distant from each other, this should not distract from the basic truth of the cosmopolitan ideal of a common humanity, namely that, as Immanuel Kant famously put it in his essay Perpetual Peace, all human persons share the earth. This cosmopolitan ideal, requires careful consideration of how different ways of distancing, and the technologies making them possible, impact on those beyond the borders of a particular State—that is, those individuals who one is trying to distance oneself from but with whom one still has to share the earth. In sum, the cosmopolitan ideal of a shared humanity is good starting point for a wider ethical debate on distance, technology, and the future of armed conflict.

Dr. Alex Leveringhaus is a political philosopher and ethicist, working on theoretical and ethical issues in armed conflict. Based in the Manchester Centre for Political Theory (MANCEPT) at the University of Manchester, UK, he currently runs a Leverhulme Trust-funded research project on how the rise of non-State actors and the availability of new combat technologies (drones, robots) affects military intervention. Prior to coming to Manchester, Alex was a post-doctoral research fellow at the Oxford Institute for Ethics, Law and Armed Conflict, as well as a Martin Fellow at the Oxford Martin School (2012-15), where he worked on autonomous weapons technology. His book Ethics and Autonomous Weapons was published by Palgrave in 2016.