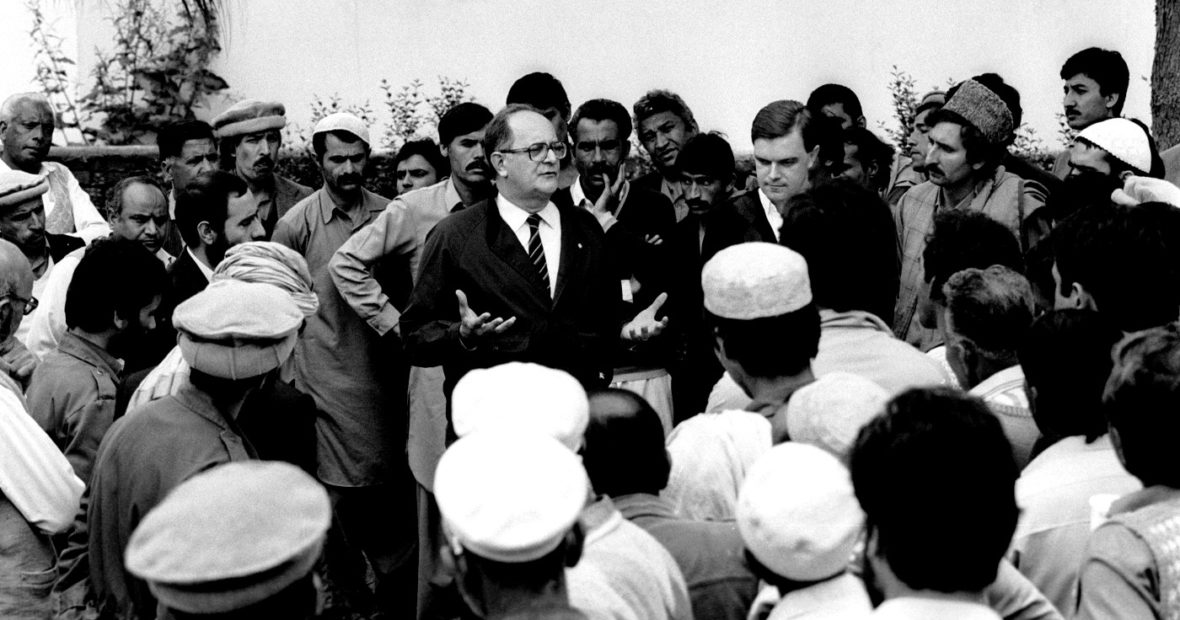 Historians have made available 1169 speeches – previously unpublished for the most part – by former ICRC President Cornelio Sommaruga (1987-1999). Humanitarian Law & Policy presents selected passages from a conversation with the Swiss lawyer, diplomat and humanitarian, held on the occasion of launch of the anthology Im weltweiten Einsatz für Humanität.

The mandate of the President of the International Committee of the Red Cross is inescapably shaped by the events that rock the world during his tenure. For Cornelio Sommaruga, who was at the helm of the Committee during the last years of the 20th century, these included the decline of Soviet power and the end of the Cold War, the Somali Civil War, the Gulf War, the Yugoslav Wars and the Rwandan genocide – to name but a few.

Apart from leading the ICRC’s response to those conflicts, highlights of Sommaruga’s presidency included his campaigning for a total ban on antipersonnel mines, his initiative towards a new emblem – the religiously- and politically-neutral Red Crystal – and the public recognition of ICRC’s inadequacy during World War II.

Those years were revisited in a conversation with the former president, held on 11 October at the ICRC in Geneva. The event, hosted by the ICRC Alumni network and the Geneva Diplomatic Circle, marked the launch of Im weltweiten Einsatz für Humanität: Cornelio Sommaruga, Präsident des IKRK 1987-1999. Reden und Vorträge. Published last month by Verlag Neue Zürcher Zeitung, the speech collection is edited by historians Joseph Jung and Bernard Altermatt, with a foreword by Swiss politician Dick Marty. Some of the following quotes are translated from French.

Humanitarianism is an act of courage

Switzerland knows Dr Cornelio Sommaruga as one of its foremost diplomats who, having served in missions to several European countries and international organizations, was decorated with a trail of awards and honorary doctorates along the way. ICRC colleagues and alumni, for their part, remember him as one who did not shy away from taking strong stances – on behalf of victims of armed conflict, and in defence of the laws and principles than protect them.

“It is no accident if we refer to the ‘Sommaruga years’ as in Genevan historiography we used to refer to the ‘Ador years’, from the time when Gustav Ador ruled the Council of States with his high authority,” said François Bugnion, member of the ICRC Assembly, during the launch event. But Sommaruga’s commanding personality cannot alone explain his legacy: “One of the dominant features of his presidency,” Bugnion continued “was his faith in the efficiency of speech. For Cornelio, this faith was in harmony with the ICRC’s statutory, but mainly moral mission of ensuring respect for international humanitarian law and for humanitarian principles.”

Speaking out on behalf of one of the oldest and largest humanitarian organizations is about striking a delicate balance between the moral duty to oppose violations of the rules of war, and the ICRC’s fundamental principles of neutrality and independence. This, however, cannot be understood as confining the institution to mutism and inaction, and Sommaruga was one to drive the organization towards a more “courageous” stance. And so he did until his very departure speech to the Assembly on 13 March 1999: “In our approach to great ideals such as solidarity, tolerance and non-violence, it would be in ICRC’s interest to be more incisive, and perhaps to display a little more courage.” Asked to elaborate on this during the conversation, he added: “My experience as ICRC President – mostly when I had to work with our delegates as neutral intermediary – showed me that there was a demand for ICRC to go even further, that is, by not limiting itself to playing the role of humanitarian intermediary, but also to act as facilitator of ceasefire negotiations and peace discussions.”

From the Shoah to the ban on mines

It is no secret that Sommaruga’s vocal positions created a bit of a stir at the time. During the conversation, the Ticinese diplomat revisited two of those episodes: the public declaration on ICRC’s mistakes during World War II, and its role in the negotiation of the Convention on the Prohibition of the Use, Stockpiling, Production and Transfer of Anti-Personnel Mines and on their Destruction.

It is now known and admitted that the ICRC failed to provide meaningful assistance and protection to the Jews and other groups persecuted by the Nazi regime. But the first such recognition was no easy gesture Sommaruga had to make, from the very first days of his presidency. It took the form of a postface he signed for Jean-Claude Favez’s book Une mission impossible? Le CICR, les déportations et les camps de concentration Nazis, published in 1989. Even then, he would be led to seek justification for the silence of his predecessors on what the ICRC witnessed in the concentration camps.

Unsatisfied by this incomplete acknowledgement of the Committee’s past, Sommaruga found an occasion in the 50th anniversary of the liberation of Auschwitz, at a conference that gathered heads of States whose citizens had been interned in the death camp. “I said that I regretted the possible mistakes and omissions of my predecessors at ICRC. In turn, my successor Jakob Kellenberger had the courage to issue a very firm statement on this matter, where he said that he could simply not accept this silence from his predecessors about the Holocaust.”

During another event – the commemoration of the Shoah also held at the ICRC on 28 April 2015 – Cornelio Sommaruga recalled the story of his involvement with regards to ICRC’s recognition of its failure to react vigorously to the persecution of the victims of the Third Reich. It was the occasion for current ICRC President Peter Maurer to welcome the World Jewish Congress along with other humanitarians, and discuss the ICRC and the international community’s role in responding to genocide and protecting civilians. Proceedings available.

When it comes to the ban on anti-personnel mines, the audacity was such that Sommaruga felt he needed to apologize to the Assembly, during his departure speech, for failing to consult the governing body before leading the ICRC to adopt what he termed an “active policy of advocacy”.

“When I was called in front of journalists to present a study that had been made after an expert meeting in Montreux in ’93, delegates came to me and asked me to present a speech they had written. It was a fantastic discourse without any conclusion. This was not my line: I would have liked to say ‘No!  We cannot go on with these land mines’.” The following day, the ICRC President made its appeal for a total ban on antipersonnel mines and blinding weapons. In Sommaruga’s reading, this resonated loudly among the International Red Cross and Red Crescent movement as well as the rest of the world, and had its impact on the adoption of the Ottawa Treaty in 1997.

More on antipersonnel mines by Cornelio Sommaruga during a historical symposium held at the ICRC on 15-16 September 2015.

The years that coincided with Sommaruga’s presidency were pivotal ones for the humanitarian sector. Crisis after crisis, it had to beef up its response, learn to coordinate efficiently, and refine its professional standards. Traces of this conjuncture are still everyday reality for humanitarians today; they remain inscribed in some of the sector’s defining texts such as the Code of Conduct for the International Red Cross and Red Crescent Movement and Non-Governmental Organizations (NGOs) in Disaster Relief, and UN Resolution 46/182, which established OCHA’s predecessor, the Department for Humanitarian Affairs.

For some, the ‘Sommaruga years’ might have been a ‘golden age’; for others, the ‘era of liberal interventionism’, or downright ‘times of turmoil’. However they are remembered, the ICRC navigated those years with a president who was in complete identification with his mission, and in constant and rigorous defence of international humanitarian law.

Doctors who provide care for the war wounded and ICRC delegates who work in areas affected by armed conflict rely on a unique ...