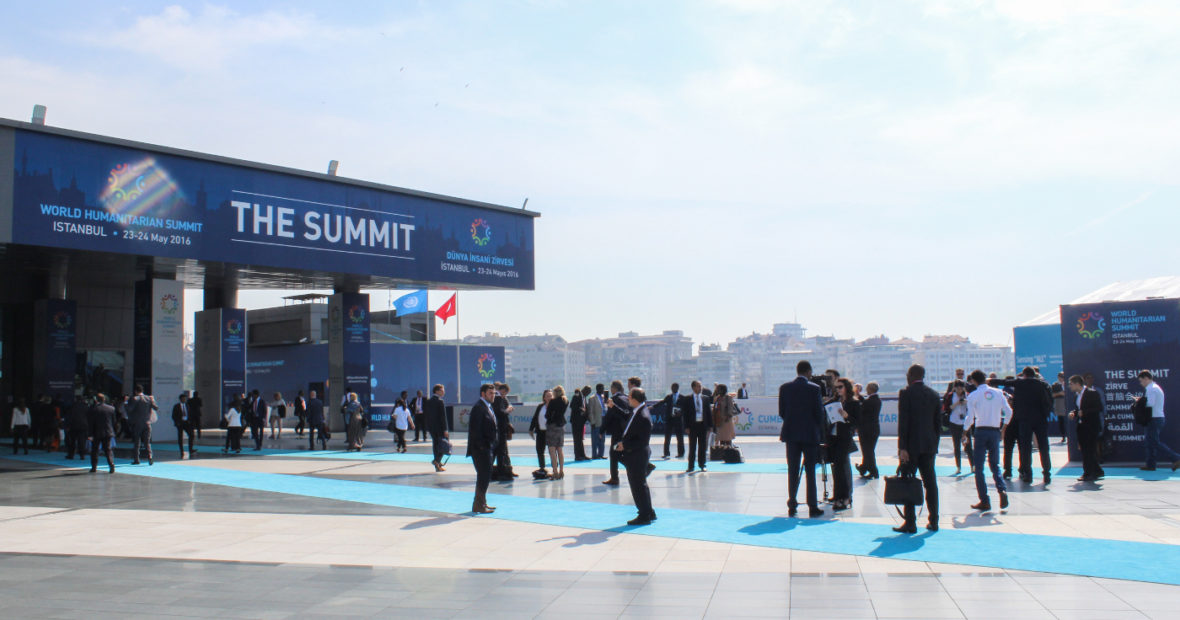 The esplanade of the Istanbul Congress Center, where high-level segments of the Summit were held. (Photo by Raphaël Dallaire Ferland/ICRC)

On the eve of the World Humanitarian Summit, Hugo Slim was reflecting on what failure and success would look like for the large-scale UN gathering. Following up from Istanbul as the Summit was drawing to a close, ICRC’s Head of Policy looked back at what this all meant for the populations we serve.

The World Humanitarian Summit, Ban Ki-Moon’s final act, opened on Monday with swarms of people massed at the gates of the Istanbul Congress Center. Inside the compound, the volunteers of the Turkish Red Crescent worked relentlessly to feed over 9,000 participants and staff while also ensuring emergency first response. Despite the grand deployment of the conference, participants could hardly lose sight of the people they were meant to serve: as the first day drew to a close with the tragic news of the bombing of Tartous and Jableh, which claimed over 148 lives and wounded over 200, we were sadly reminded of all those struggling to survive in Syria, Yemen, South Sudan and in many more war-torn countries. What outcomes for the World Humanitarian Summit? Hugo Slim shared his first reflections just as the last plenaries were being held.

Arguably the most noticed event of the Summit was the signing of ‘Grand Bargain’ on humanitarian financing, which the International Red Cross and Red Crescent Movement (the Movement) welcomed as an “important contribution to achieving better outcomes for people in need”.

“Not just because it means we at the ICRC, the International Federation and the Movement, are committed to greater efficiency and commitment to cash and community engagement, but because the Grand Bargain saw unambiguously the arrival of the World Bank in the humanitarian space,” Slim explained, also noting that the first words of the World Bank President’s speech were that violations of international humanitarian law (IHL) must stop. “For the ICRC and the humanitarian sector as a whole, we now have stronger links with longer-term finance, and that was one important policy objective for us: to make people understand, and make financing understand, that people in protracted conflict have short and long term needs.”

The Grand Bargain itself was not the only significant development to come out of its launch event. The use of the phrase ‘humanitarian ecosystem’ by UN relief chief Stephen O’Brien in his speech was more than semantics: it was a recognition, by the United Nations, of the multiplicity and diversity present within the humanitarian sector. “Already on the second day of the Summit, the leaders of the UN were using the word ‘ecosystem’, meaning that they were acknowledging different movements within the humanitarian space. This is important because it moves us from a single model of one big humanitarian machine to a much more realistic and cooperative model of a lively ecosystem of distinct actors.”

Other innovating initiatives showcased at the Summit include the “Humanitarian Impact Bond that we have designed and that is being supported by the State of Belgium, who has already committed 10 million euro to this, as well as the Netherlands who pledged from the floor for over a million euro as well,” Slim reported. Adding up to the list is the launch of the Global Humanitarian Lab that has already secured a high profile as a creative global network for innovation in humanitarian action.

The recognition of the needs of some particularly vulnerable groups is another source of optimism. Disabled people achieved a great victory at the Summit, as they have got their Charter endorsed by many States and organizations. Internally displaced people (IDPs) also got some important traction: “We have worked hard with the European Union at the Special Session on forced displacement to ensure that IDPs are not left behind as the world focuses on migrants and refugees,” Slim said.

“For us in the ICRC, the highlight, in a way, was our President’s speech at the IHL roundtable this morning. This made a great impact to a packed room of States and humanitarian leaders,” said Slim. Speaking in ICRC’s role as guardian of the Geneva Conventions, Peter Maurer urged all parties to conflict to recommit to the global contract of humanity, by upholding the obligation to respect international humanitarian law. “I think you can measure the respect and appreciation of the world community for ICRC by the length of this applause,” moderator and UN Deputy Secretary-General Jan Eliasson reacted.

And yet, despite the assembly’s tribute, “there have been real problems with this Summit as well: from our point of view, our core policy objectives around protection and IHL have not made as strong a progress as hoped,” Slim deplored, attributing this difficulty to the failure of the Summit to attract some of the key players: “it means we have to keep working hard to strengthen respect for IHL.”

In the years leading up to the Summit, just as in Istanbul itself, the Movement has engaged constructively and realistically. It pledged and called on States and agencies to act on the most crucial issues facing the humanitarian sector today. It was represented by 72 National Societies, along with the ICRC and the International Federation, to participate in 27 side events, 6 special sessions and 5 high-level roundtables. It took part in the Summit to ensure that the needs of the people we are working to assist come first amid all the process and rhetoric. It remains very much aware that the test is what will follow.

“From Istanbul, a mixed view,” assessed Slim. “The whole process of the Summit has been unclear. It’s the first, very ambitious attempt of the UN to create a major, multi-stakeholder summit, but it means that nobody is quite sure of the obligations involved in the Summit’s outcome documents and recommendations. We now have to look forward to see how States themselves would respond to the Summit. Only then can we understand how much of what was agreed at the Summit will be put into action by States. There is no doubt however that many NGOs, civil society groups and UN agencies here have made commitments. Now it’s up to them to put them into action.”