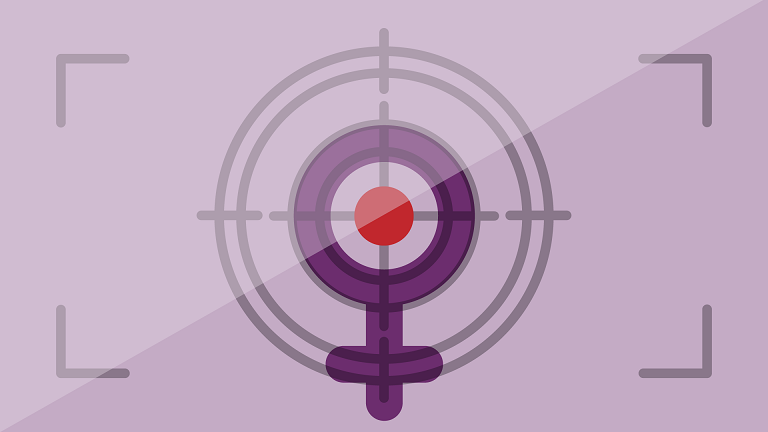 The spectrum of misogynistic violence between incels (‘involuntary celibates’) and armed groups using extreme violence against women is based around the desire to restore ‘traditional’ gender norms of male dominance and maintain systemic inequality between men and women. This often manifests in gender-based hate crimes before escalating into community violence and armed conflict.

In this post, part of the 16 Days of Action, Christie J. Edwards, Deputy Head of the Tolerance and Non-Discrimination Department at the OSCE Office for Democratic Institutions and Human Rights, encourages governments and policy makers to ensure effective criminal justice responses to gender-based hate crimes and all other forms of violence against women in order to address and prevent violence and armed conflict, as well as build sustainable peace.

In 2014, 22 year-old Elliott Rodger went on a murderous spree near Santa Barbara, California, targeting women in a sorority ‘to exact revenge on the society’ that had ‘denied’ him sex and love. Around that same time, non-State armed groups on the other side of the globe were reportedly using female sex slaves as part of their recruitment efforts.*

At first glance, Rodger’s attack on women at a California sorority and armed groups giving sex slaves to recruits and fighters may not seem to be directly linked, but the spectrum of misogynistic violence between lone shooters and armed groups using extreme violence or engaged in armed conflict has many troubling commonalities. These similarities are frequently based around the desire to restore ‘traditional’ gender norms of male dominance, and often manifest in gender-based hate crimes before escalating into community violence and armed conflict.

Rodger is one of the more well-known idols of the incel movement, short for ‘involuntarily celibate,’ a violent political ideology based on aggressive misogyny. This rapidly growing online community is primarily composed of young men who are angry and extremely frustrated by their inability to find sexual partners. The incel ideology advocates violence and bloodshed, frequently in the form of gender-based hate crimes, as a way to intimidate the broader society and women in particular.

The OSCE Office for Democratic Institutions and Human Rights (ODIHR) describes gender-based hate crimes as criminal offences motivated by bias against a person’s gender. These crimes often seek to intimidate and suppress ways of life or expressions of identity that are perceived as not complying with traditional gender norms. The victims of such crimes are often targeted due to their perceived deviation from gender norms, including non-conformance with traditional male dominated relationships and patriarchal norms.

According to the Anti-Defamation League, an intrinsic antipathy towards women forms a strong ideological connection between many incels and white supremacists, particularly those in the alt-right movement in the US. The manifesto posted online by Rodger shortly before his shooting spree was not only extremely misogynistic – it was also tremendously racist. Since its publication, the incel movement has been joined by many far-right extremists who see a close link between ‘men’s rights activism’ and white supremacy, particularly in their viewpoints and propensities towards intolerance, hatred, and violent hate crimes.

At the core of both the incel ideology and far-right groups using violent means to accomplish their goals is deep-seated sexism and misogynistic ideas of traditional gender roles. While their attacks and antipathy may not focus on a specific religious or ethnic group, gender-based hate crimes are motivated by common beliefs about male supremacy, sexuality, and the desire to violently restore ‘traditional’ gender norms and to control the women in their own lives. Incels and white supremacists often use similar arguments for the need for an armed and violent insurrection in order to overthrow the prevalent system, which conforms to the central definition of terrorism as violence designed to have wide psychological effects.

The frustration by incels with the current system, which they feel denies them the roles to which they are entitled by virtue of their gender, in addition to their adherence to an ideology that endorses violent solutions, exacerbates the dangers of incels for society and particularly for women, as well as increasing the likelihood that they will be receptive to broader far-right or extremist recruitment tactics. The rapid growth of the incel movement is also heavily due to the same social mobilization and social media tools that have provided recent non-State armed groups and other violent far-right groups with increased notoriety and attention.

According to Nimmi Gowrinathan, the strict gender roles which control women (and their sexuality in particular) promoted by groups which use extreme violence and other armed groups often act as a ‘pull’ factor for potential recruits who have pre-existing misogynistic attitudes or desires. Additionally, the United Nations ‘Framework of Analysis for Atrocity Crimes: A Tool for Prevention’ indicates ‘Increased serious acts of violence against women and children, or creation of conditions that facilitate acts of sexual violence against those groups, including as a tool of terror’ as one of the major risk factors which enables or prepares an environment conducive to the commission of atrocity crimes. The ability for governments and communities to appropriately identify and address attitudes which support the subordination of women is therefore one of the best ways to prevent the escalation of violence.

While the incel ideology may be a newer and more violent form of misogyny and social unrest stemming from the inability of men to find sexual partners, this phenomenon has similar roots in other countries and societies. Over the years, many scholars and researchers have highlighted how misogyny and oppression of women make societies poorer and less stable. In a recent study, researchers ranked 176 countries for what they call the ‘patrilineal/fraternal syndrome’, looking at issues such as unequal treatment of women in family law and property rights, early marriage of girls, polygamy, bride price, son preference, violence against women and social attitudes towards it (i.e. is rape seen as a property crime against men?).

The authors found a strong statistical link between violent political instability and the patrilineal/fraternal syndrome. The syndrome explained 75% of the variation in a country’s score on the Fragile States Index and an even better predictor of violent instability than income, urbanization, or good governance (as measured by the World Bank). The authors also noted that patriarchy and poverty are inextricably linked. The patrilineal/fraternal syndrome explained four out of five of the variations in food security, as well as four out of five of the variations of scores on the UN Human Development Index, on metrics such as lifespan, health and education.

The relationship between international violence and domestic gender equality has been highlighted in numerous studies on the role of gender equality and armed conflict,[1] as countries characterized by gender inequality are more likely to be involved in internal and international disputes and more likely to rely on violence to settle those disputes. Additionally, the root causes as well as the detrimental consequences of many forms of gender-based violence tend to be interconnected in many ways.

Many groups resort to violence due to a strong sense of historical injustice and grievances, where there is also a complex interaction of inequality, discrimination, deprivation, and rebellion (often in addition to or due to historical colonization, corporate resource-grabbing, and other negative historical legacies) which can lead to violence and armed conflict. Violence leading to armed conflict is also likely when groups have a strong sense of group identity and ‘othering’ – or an ‘us versus them’ mentality. This systematic exploitation that becomes part of the social order thus creates a system of structural violence as well as the fundamental justification for violence on a broad scale. Gendered structural violence in particular is maintained through gender stereotyping, exploitation, and a persistent threat of violence against women, all based on the mentality that women are inferior and treating them as such.

Polygamy in particular is one of the most socially destabilizing factors in a society. If the top 10% of wealthy men can afford to have up to four wives each, the bottom 30% will have none (assuming equal sex ratios in society). This inability to marry or find a partner can give unmarried men a strong motivation to kill other men and commit other violent crimes. Non-State armed groups also often exploit male frustration to recruit members – some encourage unmarried men to join rebel armed groups or form bandit groups, while other non-State armed groups offer their troops the chance to kidnap girls or even give their fighters sex slaves.

At the 1995 Fourth World Conference on Women in Beijing, UNESCO noted the link between gendered inequality and violence and concluded that inequality between men and women is a strong barrier to sustainable peace. Gendered structural hierarchies, based on norms of violence and oppression, often result in violence by desensitizing communities to violence and allowing a framework for justifying violence. Gendered hierarchies also have an additional role in explaining inter-ethnic conflicts, which further destabilize communities.

Effective criminal justice responses to violence against women, gender-based hate crimes, violent misogyny, domestic violence, trafficking, rape as a war crime and form of genocide, sexual slavery, and other domestic or international crimes are imperative to ensure that perpetrators do not enjoy impunity and to send a strong message that all forms of violence against women will be prosecuted.

As governments, policymakers, humanitarians, and peacemakers analyze conflict cycles, trends, and resolutions, the levels of violence, oppression, and inequality of women should be a key factor in addressing and preventing violence and armed conflict, as well as build sustainable peace. In order to create strong, peaceful, and resilient communities, societies must ensure that women are treated as equal and valued members of society, use gender-sensitive and intersectional conflict analyses, include women as key leaders in peacebuilding efforts, and ensure strong criminal justice penalties for misogynistic crimes and violence against women.

*Editor’s note: No specific references to particular actors have been included in accordance with ICRC editorial policy.