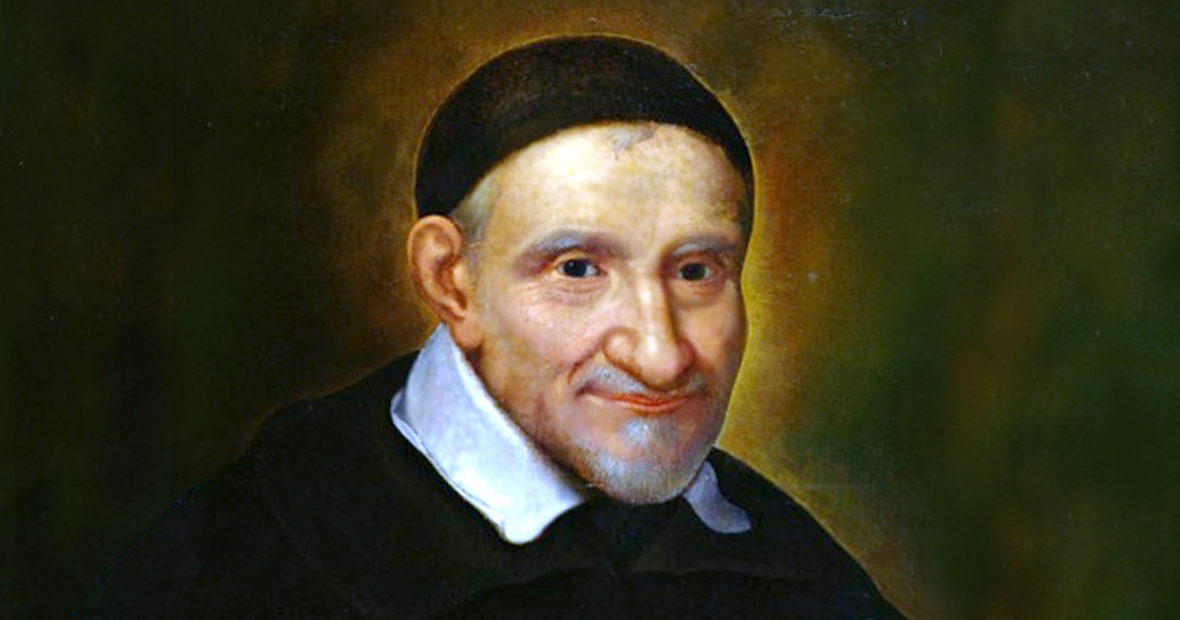 More than 350 years after his death in 1660, the life and trailblazing humanitarian work of Vincent de Paul – canonised in 1737– continues to be celebrated. His dedication to helping the poorest and most disadvantaged people in society laid the foundations for today’s humanitarian principles. While de Paul was a priest, his work and humanitarian ideals coexisted with, and even transcended, religion. For him, humanity, impartiality and neutrality were the most important considerations to help those who needed help most, no matter who they were or what religion they practiced, including in the Muslim world. Not only did he inspire new ways of thinking, he also had political and mediation roles that were closely related to his humanitarian approach. In today’s world, amidst global humanitarian needs on a massive scale, this blog reflects on what this man accomplished four centuries ago and his enduring legacy.

Various groups benefited from Vincent de Paul’s work: victims of war, refugees, abandoned children in Paris, the sick, the poor and the elderly taken in by the Hôtel-Dieu de Paris hospital. As chaplain-general of Paris prisons, he also initiated prison visits. He strongly believed that the chaplain’s role was not to evangelize prisoners, but rather to help them through their suffering.

De Paul was principled yet pragmatic. His eloquence and his organizational abilities were major factors in the success of his projects. In the face of growing poverty affecting multiple groups and a society that lacked an adequate welfare system, his persistence in encouraging acts of charity paid off. In 1617, he established the first ‘Brotherhood of Charity’, bringing together lay people to help families experiencing difficulties as well as to assist the sick. He then founded the ‘Gardes des Pauvres’ (Guardians of the Poor), which gave rise to the congregation of the Company of the Daughters of Charity, headed by Louise de Marillac In 1634, he set up the Foundation of the Charity of the Hôtel-Dieu, a home for the elderly, which became the Hôpital de la Salpêtrière in 1657. De Paul paved the way for social and humanitarian action appropriate for the issues of the period, which included the 1629 food shortage, the outbreak of plague between 1624 and 1640, and various conflicts (the Fronde and the Thirty Years’ War).[1]

Major political events shaped the environment in which Vincent de Paul worked, in a period marked by clashes of ideology and religious wars. Faced with the disintegration of a weakened political power, a strongly divided Royal Court, an anomic society full of all forms of misery, he chose to commit himself to charitable work with an underlying political motive – “to soften the impact of the military occupation, to position France as the saviour, and to win the hearts and minds of the people…”

His vision of humanitarianism was closely correlated with a mediation role aimed at curbing the conflict that prevailed and shaping a space for constructive discussion. For instance, in 1640 he asked for an audience with Cardinal Richelieu to convince him of the imperative need to restore peace in France. In 1649, he took a similar approach with Queen Anne of Austria (the spouse of Louis XIII) and Cardinal Jules Mazarin (the King’s chief minister). He continually called for moderation in the treatment of Protestants, his efforts guided by a desire for impartiality and reconciliation.[2]

From 1638-1647, de Paul’s humanitarian work focused on helping refugees in Paris and providing aid to people in the Duchies of Lorraine and Bar, which had been devastated by occupying French and invading Swedish troops during the Thirty Years’ War. As Chaplain for the French armed forces, he coordinated charity collections in Paris and helped the injured by sending missionaries to the affected areas. He set up an entire system to secure and deliver assistance. This involved collecting money, clothing, food and tools, transporting them from France to the Duchy of Lorraine, and ensuring that the provisions reached those in need. He worked hard to arrange the necessary medical assistance. Over a ten-year period, he was mandated to help 25 towns in Lorraine, mainly Verdun, Nancy, Saint Mihiel, Metz, Toul, Pont-à-Mousson, Bar-le-Duc and Lunéville.

The 1648 Treaty of Westphalia marked the end of the 30 Years War and brought a degree of political stability to Lorraine. But the misery did not end there. The war moved to Champagne and Picardie, which saw similar atrocities. In addition to distributing relief goods and caring for the sick, people recruited by De Paul sought to provide shelter for the homeless victims of the conflict. To this end, poor people were taken in, without discrimination, and treated impartially. Humanitarian action, in this context, could be understood as ‘an expression of secularism, where religious faith and a new type of political engagement can co-exist respectfully’.[3]

In 1638, concerned about the fate of children left to fend for themselves in Paris, Vincent de Paul set up the Hospice des Enfants-Trouvés (home for foundlings), aiming to provide general care for poor children and orphans. In Paris and its suburbs, between 300 and 400 children (for the most part, illegitimate) were abandoned each year by their mothers, mainly due to the lack of government support. These children were often victims of large-scale trafficking and other kinds of abuse. To address the problem, Vincent de Paul arranged for several houses to be built with a bequest of 64,000 livres (former French currency) left by Louis XIII. In 1644 they provided a home for 4,000 underprivileged children. The children were looked after by nannies until they were three or four years old. After that they were sent to school, where they learned to read and write and then received vocational training. Louise de Marillac, of the Daughters of Charity, became a meticulous manager of his educational programmes.

As his charitable operations expanded, de Paul’s worked more and more closely with the Dames of Charity (financing, supervision), the Daughters of Charity (presence with children) and Mission Congregation (in charge of operations and funding).

In 1670, the Hôpital des Enfants-Trouvés (hospital for foundlings) was established as a public institution by royal decree. This built on the foundations laid by Vincent de Paul and recognised his contribution.

The spirit of Vincent de Paul’s concerns about children’s particular needs and their welfare is effectively enshrined in the 1989 Convention on the Rights of the Child. In its Preamble, the Convention stresses the need to give special protection to children, while Article 3 emphasizes that the best interests of children must be a primary consideration. Other articles recognise the right of every child to education, and to a standard of living adequate for their physical, mental, spiritual, moral and social development.

The quest for funds

Notwithstanding the recurrent difficulties he experienced in trying to finance his projects, Vincent de Paul succeeded in diversifying his funding sources. His relationship with the court of Louis XIII enabled him to set up a private charity network, funded in part by letters patent issued in 1642. Indeed, de Paul was adept at mobilizing figures of the French nobility. In 1610 he became chaplain to Queen Margherita (wife of Henry IV, Marguerite de France). She devoted one-third of his income to charitable work, especially to the Brothers of Saint-Jean-de-Dieu (known as the ‘Brothers of Charity’). Likewise, Madame de Gondi and Louise de Gonzague (who became Queen of Poland) provided substantial financial support to the Sisters of Charity and the Missionaries; Madame de Lamoignon, wife of the First President of the Parliament of Paris, made her private mansion available to accommodate the needy. Moreover, de Paul raised support from lotteries, concessions, bequests and income from land (including a vineyard tax levied to finance homes for the needy).[4] Ultimately, the connections de Paul developed with the court and the aristocracy helped him set up a wide-ranging network providing welfare and care to the poorest citizens. It was his unerring goal to put wealthy people at the service of the most disadvantaged.

Vincent de Paul’s charitable endeavours extended beyond France and beyond the realms of the Christian world. As at home, he was motivated not by a desire to evangelise, but by a genuine sense of humanity. He established the Foundation of the Mission in Tunisia and Ireland (1645), Algeria (1646), Madagascar (1648), Poland (1651) and Italy (1655). He sent the first Lazarists (members of the Congregation of the Mission) to Algiers in 1646. The legacy of this was felt almost 200 year later, when the Daughters of Charity were invited to Algeria by the government and ecclesiastical authorities.[5]

According to records at the Archdiocese of Algiers, on 27 July 1842, the Sisters of St Vincent de Paul were sent to the new colony to take care of hospitals, schools and prison visits. They showed great devotion when the cholera epidemic broke out in 1849 and many paid with their lives. In addition, they helped the victims of the various earthquakes that shook Algeria in 1869. Over the decades, the Daughters of Charity Provincial House, located in the heart of the Casbah in Algiers, won the esteem and trust of the Algerian people through its impartiality and the relevance and effectiveness of its work.

In 2007, the Company of the Daughters of Charity of St Vincent de Paul was awarded consultative status with the UN Economic and Social Council (UN ECOSOC). Representatives such as Sister Monique Javouhey regularly take part in working groups on the right to development, extreme poverty and the elimination of discrimination, as well as meetings on issues concerning education, the rights of children and the rights of people with disabilities. This involvement helps to increase the visibility of the work that has been carried out over the centuries.

In addition, the Society of Saint Vincent de Paul – with some 800,000 members in more than 150 locations around the world – develops worldwide training programmes and centres for the rehabilitation of prisoners, and provides assistance for victims of violence, disasters and conflicts.

Even though Vincent de Paul was a priest, his work and humanitarian principles went beyond religion. For him, principles of humanity and impartiality were the most important considerations to be able to provide assistance to the neediest people in society, no matter who they were or what religion they practiced. He was motivated first and foremost by a wish to relieve people’s misery, and this did not come with strings attached of converting to religion.

More than 200 years before Henri Dunant established the International Committee of the Red Cross, de Paul understood the need for organised relief, categorising affected people according to their particular needs, including detainees. He effectively created professional organizations with well-trained, committed staff and was enterprising in finding diverse sources to fund them.

Today, humanity, impartiality, neutrality and independence are the guiding principles of humanitarian action for most organisations working in complex crises, while the International Red Cross and Red Crescent movement has a more specific set of Fundamental Principles. In armed conflicts where the politicization and militarization of aid is frequent, being an impartial, neutral humanitarian actor is arguably more important than ever in order to gain safe access to people in need, wherever they are and whatever side they are on.

Vincent de Paul’s pioneering role in the humanitarian field was the subject of a special exhibition in 2017 at the UN Palais des Nations in Geneva. His spirit of humanity – his unconditional desire to alleviate suffering no matter where he found it – continues to inspire and remains at least as important now as it was 400 years ago.

[5] Archives from the archdiocese of Algiers.