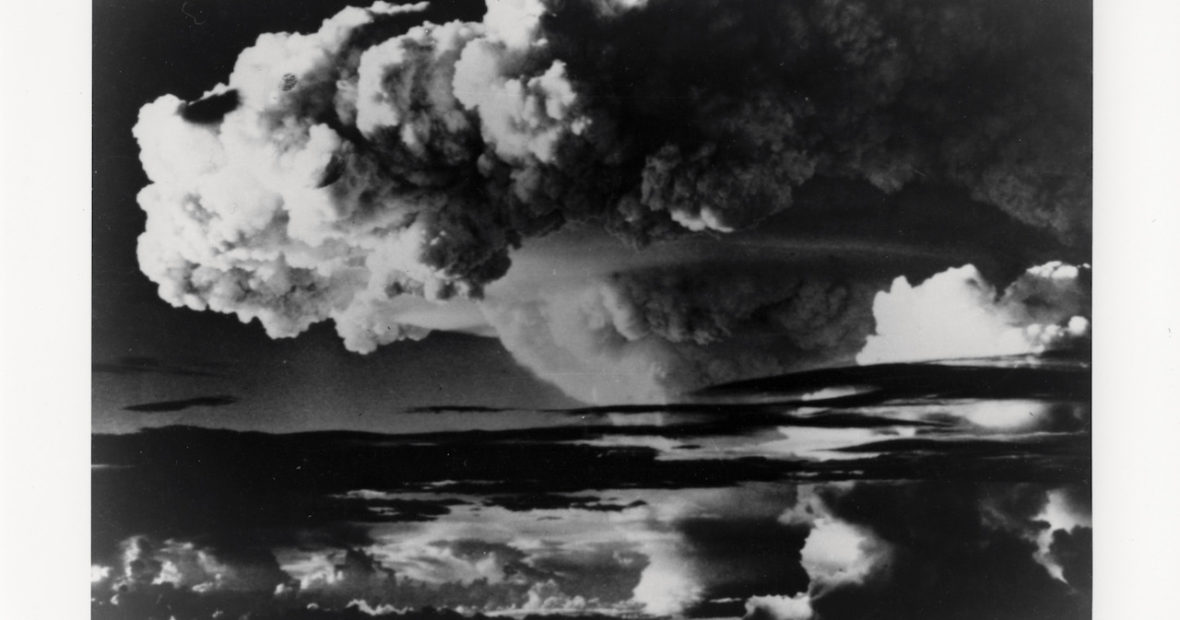 Today marks one year since the Treaty on the Prohibition of Nuclear Weapons was declared open for signature. Its adoption confirmed that a clear majority of States unequivocally reject nuclear weapons on moral, humanitarian and now legal grounds. I’d like to take the opportunity of the anniversary to reflect on my recent visit to Hiroshima and to mark the first year of this new Treaty as a concrete step towards a world free of nuclear weapons.

It was a very hot and humid day when I arrived at the Hiroshima Peace Memorial Museum this past August. Despite the air being so sticky, it was clear that this was a place where people had come to calmly reflect. The yearning for peace was strong, perceptible even, in the manner that visitors thoughtfully laid down their flowers and placed their carefully folded cranes at the foot of monuments.

With Japan being the only country to have experienced atomic bombings and with thousands of bomb survivors, or ‘Hibakusha’, still wearing the scars of that horror on their bodies and in their minds, the history and name of Hiroshima is well-known across the world.

The ICRC’s Dr Marcel Junod was the first foreign doctor to reach Hiroshima after the bomb on 6 August 1945 and to treat some of the victims. In his journal he described

a site totally unlike anything we had ever seen before. The centre of the city was a sort of white patch, flattened and smooth like the palm of a hand. Nothing remained.

When writing about his visit to the emergency hospital, he added that

several patients are suffering from the delayed effects of radioactivity with multiple haemorrhages. They need small blood transfusions at regular intervals; but there are no donors, no doctors to determine the compatibility of the blood groups; consequently, there is no treatment.

Following in the footsteps of Dr Junod, standing there in Hiroshima, it is almost too hard to get one’s head around the significance and the extent of the suffering that occurred. The Museum, however, does an excellent job of illustrating the tragedy and evoking hope, with its poignant displays and sobering testimonies providing the evidence, facts and figures in a way that powerfully moved me. 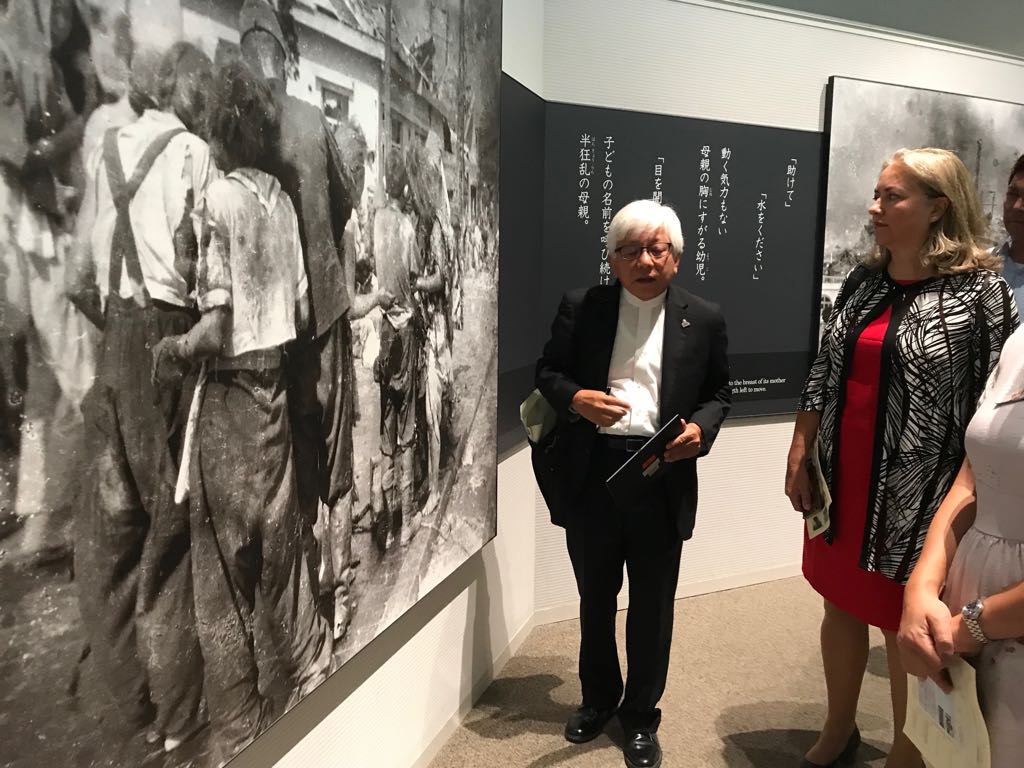 As many will know, the atomic bomb dropped on Hiroshima created a fireball that destroyed 13 square kilometres of the city. The facts describing the death and devastation that ensued are almost inconceivable. Around 63% of the buildings in Hiroshima were completely destroyed and many more were damaged. Estimates of total deaths in Hiroshima have generally ranged between 100,000 and 180,000, out of a population of 350,000. In Hiroshima and Nagasaki combined, approximately 340,000 people died immediately and within five years of the bombs being dropped.

But aside from the facts, what touched me most at the Museum were the small gestures. The heartbreak of seeing the twisted remains of a child’s tricycle and wondering that if the impact of the explosion on the metal was so heavy, what would it have done to the small compact body of the child. The clothes and school uniforms of survivors—carefully laid out—clearly marked with patterns of blood and burns. Other objects of everyday life—a lunchbox, a watch and a water bottle—in tatters or warped beyond recognition.

The Treaty on the Prohibition of Nuclear Weapons recognizes these catastrophic humanitarian consequences of nuclear weapons and their incompatibility with international humanitarian law. Acknowledging that the use of nuclear weapons is not limited to the immediate effects, it also requires assistance for victims of nuclear weapons use and testing, and for environmental remediation. In fact, 190,000 Hibakusha are still alive, as well as 200,000 ‘second generation’ survivors. Both continue to suffer from increased incidences of leukaemia and other cancers. Many have psychological instability, including post-traumatic stress disorder.

The Treaty also provides a comprehensive prohibition of nuclear weapons and a pathway for their elimination. Although it will not make nuclear weapons immediately disappear, it reinforces the stigma against their use and supports commitments to nuclear risk reduction. In particular, it strengthens the commitments found in Article VI of the 1970 Treaty on the Non-Proliferation of Nuclear Weapons, which remains a cornerstone of disarmament efforts. The Treaty also serves as a clear disincentive for proliferation—an especially important aspect today, with rising international and regional tensions, consequently increasing the risk of nuclear weapons use.

While the Treaty is not yet in force, many of the States who have signed it this past year, and the many others who voted to adopt it, are currently going through their national ratification procedures. These processes naturally take time, but I am confident that the Treaty will reach the 50 ratifications necessary for it to enter into force in the near future.

My visit to the Hiroshima Peace Memorial Museum will stay with me throughout our efforts to urge all States to join the treaty. We first called for nuclear weapons to be abolished in September 1945, shortly after the devastation and unspeakable suffering that Dr Junod and our other colleagues witnessed in Hiroshima and Nagasaki. The ICRC and the broader Red Cross and Red Crescent Movement repeated these calls throughout the Cold War and have continued to do so ever since. Next week on the International Day for the Total Elimination of Nuclear Weapons, another signing ceremony will take place during the high-level segment of the UN General Assembly, at which the ICRC President Peter Maurer will speak. I take this opportunity to encourage all States that have not yet done so to join the Treaty on this occasion.

The power of the museum served to remind me of the people beyond the Treaty and behind the statistics—men, women and children going about their daily lives—who were destroyed by a single use of this deadly and unacceptable weapon. Yet, it also stirred within me a sense of hope, for a common belief in the intrinsic worth of humanity, the dignity of human beings and a world free from the horrors of nuclear weapons. 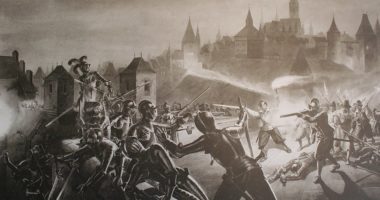 As long as there have been cities, wars have been staged within them. While the term ‘urban warfare’ conjures more recent images of ... 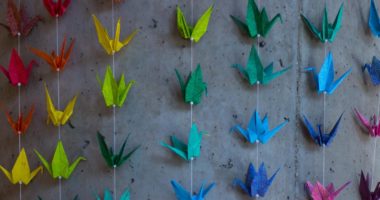 The landmark Treaty on the Prohibition of Nuclear Weapons (TPNW) enters into force on Friday, 22 January 2021 as a new instrument of ...