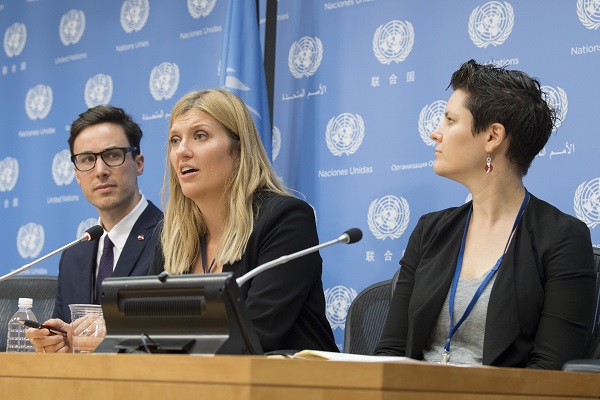 States have agreed upon a treaty with humanitarian foundations that prohibits nuclear weapons. It contains much, beyond its prohibitions, that is unprecedented in a nuclear weapons treaty. Crucially, it provides a framework for responding to the rights of victims and remediating contaminated environments.

In a remarkable achievement this summer, States concluded negotiations on the Treaty on the Prohibition of Nuclear Weapons (TPNW). Having opened for signature in September, the TPNW will be a key topic for States at the UN General Assembly’s First Committee in the coming weeks. The awarding of the 2017 Nobel Peace Prize to the International Campaign to Abolish Nuclear Weapons (ICAN) for their work for the TPNW will further draw attention to the treaty. The treaty text prohibits these weapons—because of their catastrophic and unacceptable humanitarian consequences—and provides a framework for their elimination. It also bans assistance with prohibited acts. But, this is not all that it does. A key area in which practical impacts from the TPNW could soon be felt is through its provisions for victim assistance and environmental remediation (i.e., the rehabilitation of the environment and protective measures that minimise human exposure to radiation). These obligations follow the approach of previous treaties on anti-personnel land mines and cluster munitions.

The conclusion of the TPNW means that international prohibition treaties for all the weapons of mass destruction—biological, chemical and nuclear—have now been successfully negotiated. This treaty thus resolves a legal anomaly that has persisted for decades. Moreover, it represents a morally appropriate and legally coherent response to the overwhelming weight of evidence and testimony about the horrific impacts of nuclear weapons—many aspects of which were presented in the International Review of the Red Cross’s edition on The Human Cost of Nuclear Weapons last year.

Victims, including survivors of the atomic bombings of Japan and of nuclear tests, gave testimonies both to conferences of the humanitarian initiative and to States during the treaty negotiations. Inclusion of victims’ perspectives—where it does not exploit experience but gives agency and empowerment—has a logical centrality to the development of a humanitarian discourse, and to full understanding of the effects of particular weapons. During the humanitarian initiative, States involved also acknowledged that the rights and needs of many of the victims of nuclear weapons use and testing had not yet been adequately addressed.

When negotiations began, there was therefore an expectation that a treaty prohibiting nuclear weapons, arising from the humanitarian initiative, might include positive obligations on States to address these rights—as well as to address the continuing humanitarian impacts of nuclear weapons on communities from environmental contamination. Sections of civil society, including ICAN, campaigned strongly for the inclusion of such obligations in the run up to and during the negotiation of the TPNW.

Part of this argumentation involved making the case that the treaty should not take a step back from recent international law on the prohibition of certain weapons. The Anti-Personnel Mine Ban Convention (APMBC) and in particular the Convention on Cluster Munitions (CCM) have strong frameworks for the non-discriminatory assistance of victims, and the clearance of dangerous remnants from the use of these weapons. Including analogous provisions on victim assistance and environmental remediation in a treaty banning nuclear weapons therefore represents a continuation of these important developments in international law, which have had a real impact in countries and for people affected by these weapons.

Beyond the fact of its prohibitions, the final negotiated text of the TPNW contains much that is unprecedented. Among these, the ‘unacceptable suffering of and harm caused to victims’ of nuclear weapons use and testing are recognised in the treaty’s preamble. This highlighting of the current and actual human costs (rather than the hypothetical devastation of a future nuclear war) is a novel step forward in treaties addressing nuclear disarmament. Recognition of the discriminatory effects of nuclear weapons in the form of disproportionate impacts on women and girls is similarly significant. The preamble’s acceptance of the disproportionate impact of nuclear weapon activities on indigenous peoples is also a first for any weapons-focused treaty.

The issues of victim assistance, environmental remediation and international cooperation and assistance are addressed in Articles 6 and 7 in the treaty. Together, they oblige States parties to collectively respond through an international framework, for the first time, to affected individuals’ rights and needs, and to take steps towards remediating environments contaminated by the testing and use of nuclear weapons.

On victim assistance, Article 6 requires States, ‘with respect to individuals under its jurisdiction who are affected by the use or testing of nuclear weapons,’ to ‘adequately provide age- and gender-sensitive assistance, without discrimination, including medical care, rehabilitation and psychological support, as well as provide for their social and economic inclusion.’ This reflects the rights based, non-discriminatory approach of the CCM—though the TPNW does not articulate provisions that are as detailed.

On environmental remediation, the treaty requires that States ‘shall take necessary and appropriate measures towards the environmental remediation of areas’ under their jurisdiction or control that are contaminated as a result of ‘activities related to’ nuclear weapons use or testing. By including this provision, the TPNW expands the scope of international weapons prohibitions treaties to cover obligations on the clearance of toxic, as well as explosive, remnants of war.

Article 7 outlines the right of States to seek and receive assistance, obliges States to cooperate to facilitate the implementation of the treaty, and requires those in a position to do so to provide a range of assistance. It also articulates a particular responsibility to provide assistance on the part of any State party that has used or tested nuclear weapons.

Based on past experience on anti-personnel mines and cluster munitions, the existence of these obligations could—and should—improve the global state of assistance to the victims of nuclear weapons and steps towards the remediation of contaminated environments. The existence of treaty obligations should serve to: raise awareness and levels of expectation on these issues; increase the resources available to address them; and bring together a global community of practice. Previously, the impact of treaty frameworks has extended beyond States parties, on these issues. For example, the United States is now the biggest donor to mine clearance efforts globally, despite not being a party to the APMBC, suggesting that the treaty helped to shift global norms. Similar normative impacts could be possible for the people and places affected by nuclear weapons.

The TPNW will enter into force, making these obligations legally binding on States parties, following 50 ratifications. Looking at the ratification rates of past similar agreements, this may take 1-2 years. In order for the positive obligations in the TPNW to have the greatest impact, there are a number of steps that States, in partnership with civil society and international organisations, could take in the meantime, in preparation for their implementation.

Needs assessments at the local, national, regional and global levels should be undertaken before the first Meeting of States Parties of the TPNW to better understand the scope of action needed, and potential donors and development assistance mobilised. Action plans and measures to monitor progress could then be established through treaty meetings. Action could also be taken now towards building a global community of practice on these issues, through convening those already implementing relevant programmes or who have experiences from other processes—including from States, international organisations and civil society—to discuss lessons learned and standards.

Throughout, the meaningful participation of victims—including survivors and affected communities—should be ensured and developed. Despite the mobilisation of victims during the humanitarian initiative and treaty negotiations, individuals and groups have had little input so far on the form of these obligations and their implementation.

As the States that join the TPNW move forward in coming years on its implementation and towards ensuring its impact, the treaty’s positive obligations could be a key area of activity. This would be true to the humanitarian foundations of the treaty, and to its origins the evidence of the ongoing catastrophic effects on people and places of nuclear weapons.

Elizabeth Minor is an Advisor at UK non-governmental organization Article 36, which is a member of the International Steering Group of ICAN. Elizabeth previously worked for nongovernmental organisations Every Casualty and Oxford Research Group.