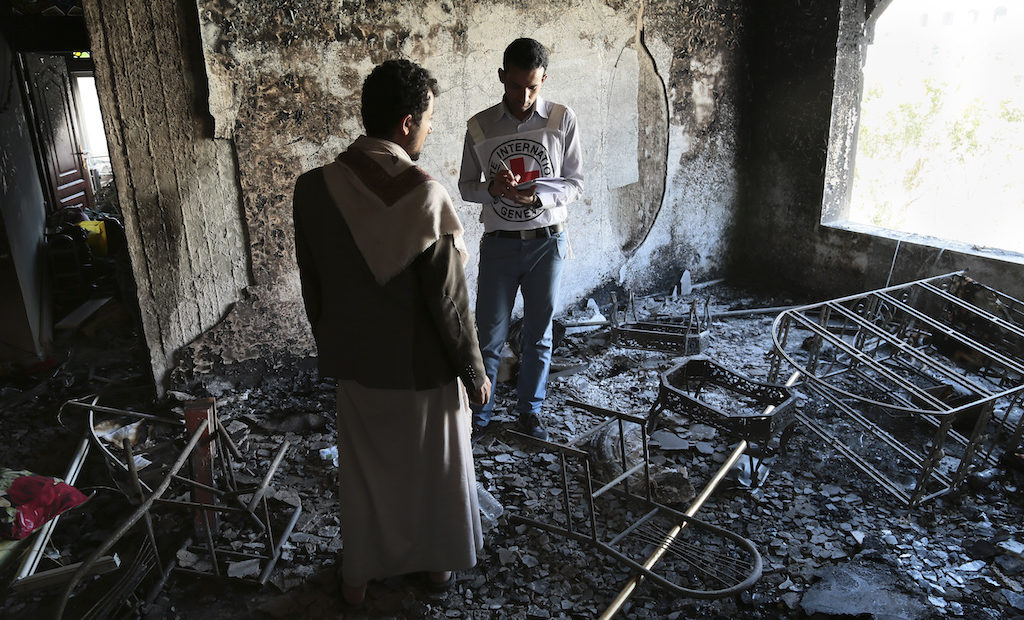 Your five-buzzword guide to better understanding how people affected by conflict and violence can take the lead in humanitarian action.

Stranded in the middle of an armed conflict or an earthquake? There was a time when humanitarians would jump straight to providing you with their idea of your essential needs and services, without asking for your opinion. That time, we hope, is soon over.

Today, people affected by war and disaster are increasingly vocal about the roles and capacities they want to play in humanitarian action. They do not want to be left out of decisions that impact them. And, they want to hold organisations accountable for the aid that has—or hasn’t—been provided to them.

Humanitarians are making an effort to recognize affected people’s right to have a voice. However, engaging with them, let alone involving them in programming, can be complicated. This is particularly true in armed conflicts and other situations of violence (watch our 3-minute animation to find out why).

How complicated? Enough for the International Committee or the Red Cross (ICRC) and the Harvard Humanitarian Initiative to publish a 90-page discussion paper. The report’s main topics were unpacked on 28 March in a panel discussion between Mary Werntz (ICRC); Alyoscia D’Onofrio (International Rescue Committee – IRC); Bonaventure Sokpoh (CHS Alliance); and Caroline Vuillemin (Fondation Hirondelle). The discussion was moderated by Jacobo Quintanilla (ICRC & co-author of the report).

Missed the event? A second panel discussion will take place on 18 April at the Overseas Development Institute (ODI)  in London.

If that doesn’t work for you, we’ve compiled this five-buzzword guide to everything you’ve always wanted to know about engagement and accountability (but were afraid to ask). Disclaimer: this guide covers everything you need to know—not everything that is to be known.

Or, the belated realization that affected people should have a say in humanitarian action.

First coined? Good question. Was it in the 1980s, when Robert Chambers talked about participatory methods? Right after the Joint Evaluation of the 1994 Rwanda genocide? In July 2003, when the Humanitarian Exchange Network published an issue on the ‘Accountability Revolution’, detailing a phenomenon that, in 2016, would be rebranded the ‘Participation Revolution’? Whatever your view on the specific time, neither engagement nor accountability seem to be new issues—far from it.

Often heard in association with: the Grand Bargain—the agreement signed, on the margin of the 2016 World Humanitarian Summit, by more than 30 of the biggest donors and aid providers in order to ‘get more means into the hands of people in need’. Specifically, the Grand Bargain seeks to gear up cash programming and channel 25% of all humanitarian funding ‘as directly as possible’ to local and national responders by 2020.

Key aspects: The participation revolution is about including affected people and their communities in the sector’s decision-making processes in order to ensure that humanitarian response is as relevant, timely and effective as possible. This means providing those affected with  effective processes for their participation and feedback and ensuring design and management decisions are responsive to their views.

Clouds & silver linings: The external environments in which humanitarian agencies operate often feature inherently political systems, actors and agendas. As a result, engaging with affected people and acting on their views without compromising the neutrality of organisations, or other humanitarian principles, can be a precarious exercise.

More introspectively, it is difficult to let go of past institutional habits. Agencies are still keen on skipping the ‘headaches’ of securing trust and access to affected people in order to ask them for feedback on the quality of response. Even as organisations develop a growing number of guides or social media tools on community engagement, operational practice and habits don’t always reflect the theory. This is partly due to a lack of incentive for humanitarian actors to change.

Still, there is a growing readiness in the sector for power to be devolved, from organisations to affected people. Organisations are also increasingly aware that this power shift will happen with or without their buy-in. Indeed, affected people are proving ever more innovative in organising their own humanitarian responses.

2. Client-centric engagement (because the ‘beneficiary’ word is dead)

Or, that moment when humanitarians take a page from the business world’s book.

First coined? In the business world, the term is as old as time. In the humanitarian sector? It depends. The IRC started talking about client-centric programming and traded in the morally loaded term ‘beneficiaries’ for ‘clients’ as far back as March 2016. Meanwhile, the development sector has spent the past decade floating around different terms, including ‘constituents’, ‘users’ and ‘citizens’.

Often heard in association with: Inclusion, or the idea of catering to all people, no matter their background, age, gender or other characteristics. Whereas businesses may choose to cater to a specific group of individuals, humanitarian organisations have a positive obligation to ensure that any people-centric programme takes all people into account.

Key aspects: Contrary to popular belief, the humanitarian sector is far from allergic to the idea of borrowing terms and practices from the business sector. This includes the practice of explicitly soliciting client’s—or people’s—feedback, in order to better understand and respond to their needs.

Clouds & silver linings: Previous attempts to incorporate business approaches into the humanitarian sector have deepened siloes between programmes (e.g., incorporating patient feedback loops, but doing so exclusively in healthcare programmes). Moreover, many have been quick to point out that parallels or analogies with the business sector are limited, as their customers rarely face the same level of urgency and need as the people we serve.

And yet, acting as if affected people have no choice but to resort to humanitarian organisations is to overlook, and fail to build upon, their pre-existing coping mechanisms and resilience. To map these, one must acknowledge the diversity of affected people. This means delving deeper into arbitrary categories (e.g., ‘women’, ‘internally displaced people’ or ‘IDPs’) to understand how different labels intersect and create unique sets of priorities. This exercise can also reveal how the labels we use can cause exclusion or grow redundant as conflict or displacement shake up power dynamics within a community.

Or, how to better grapple with complex and interconnected environments.

First coined? Let’s just say that the phrase has been making a comeback over the past few years, especially where urban humanitarian response is concerned.

Often heard in association with: Localization, or recognizing and strengthening the role that local and national actors have generally played in responding to humanitarian needs (see more on the ICRC’s stance on localization here).

Key aspects: It is hard to be people-centric and enable participation when our understanding of the context is insufficient, or is cobbled by assumptions. As such, the past few years have seen the accelerated development of tools and skills to more broadly analyse the contexts in which we work. This includes mapping out people’s information ecosystems (the different communication and information channels they use and trust), and how these are impacted or manipulated during crises.

Clouds & silver linings: Analysing contexts requires a certain level of access and proximity that humanitarian organisations aren’t guaranteed—especially in conflict areas. Here, collaboration with local partners (including Red Cross Red Crescent National Societies) can help, although it shouldn’t be to the detriment of their own security. Indeed, these actors can use their different levels of integration with affected populations to deepen our collective understanding of local realities—especially in urban areas, where the situation is often more complex.

Local media can also play a role, not only in shedding light on local contexts, but also in enabling ‘cultural access’. Much has been said on the volatility of humanitarian organisation’s physical access to conflict areas and the complementary role that digital proximity can play. Few, however, have ventured into discussions around how humanitarians’ attitudes and behaviours should adapt to different cultural environments. Finding answers to this could help assuage disruptions incurred by high staff turnover and create continuity in how all humanitarian staff behave.

Or, the buzzword still reeling from the Cambridge Analytica scandal.

First coined? It’s ambiguous, but the term was popularized by Silicon Graphics’ chief scientist, John Mashey in the late 1990s (see if you can make sense of his PowerPoint).

Often heard in association with: Digital literacy, or people’s ability to use information and communication technologies to find, evaluate, create or share information.

Key aspects: In a nutshell, big data refers to extremely large or complex datasets whose analyses can reveal patterns, trends or associations. ‘Datafication’ refers to the process through which organisations become data-driven enterprises. This is something that the humanitarian sector is increasingly facing as its programmes generate—and rely upon—ever-larger amounts of data and artificial intelligence.

Clouds & silver linings: While data can certainly help inform programming decisions, there is a tendency for humanitarian organisations to collect more data than strictly required, without necessarily knowing how to secure it properly. Moreover, organisations often lack the resources to properly analyse what has been collected. They might, as one of the panellists pointed out, tend to share too many personal and sensitive findings with external parties, in the name of transparency.

Meanwhile, the sector faces greater ethical questions around the security of the systems used and the role it should play in data management and in promoting affected people’s digital literacy. To find answers, the ICRC and Privacy International recently undertook new research on ‘humanitarian metadata’, or how the data our programmes generate (including data about our data) can cause harm. Findings to be published soon …

Or, the process which we often forget can be a force for good.

First coined? Feel free to peruse the Handbook of Administrative History to find out.

Key aspects: Where engagement and accountability are concerned, ‘bureaucratization’ refers to the fear of turning an interactive and meaningful collaboration with those we serve … into a superficial set of boxes ticked to please donors.

Clouds & silver linings: Humanitarian organisations often accuse donors of having an output-driven mentality: How much has been sent? Delivered? How quickly? To how many? Humanitarians complain that this stifles efforts to regularly re-evaluate assessments and it prioritises the speed at which budgets are spent over the quality and accountability of a response.

As the sector opens up about the contradictory pressures and incentives it faces, it shouldn’t forget that donors can find themselves in difficult positions—pressured to show ‘value for money’ or instrumentalised through their public funding.

What is needed here, the panellists in Geneva agreed, is an open conversation between humanitarian organisations and donors. The aim? Re-defining what real success looks like, how to enable it and demonstrating our commitment to putting people at the centre of everything we do.