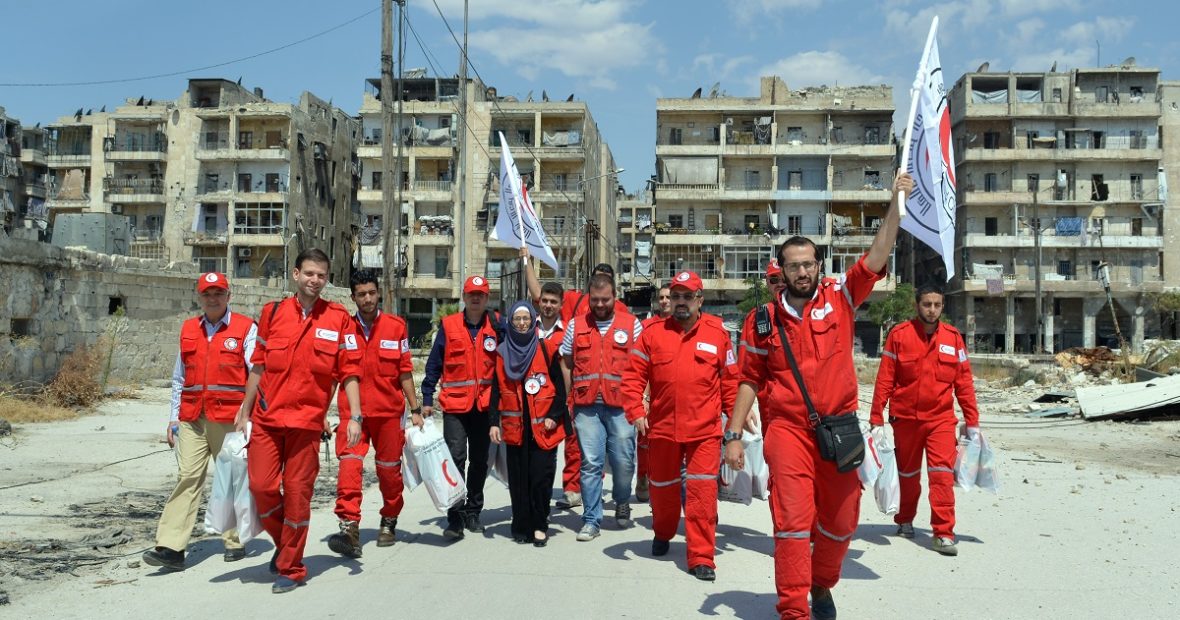 This blog post was originally published in the January 2018 issue of the Review Humanitarian Aid on the Move, published by Groupe URD.

Localization is a good thing,[2] as it recognizes the central role local and national actors have always played in responding to humanitarian needs and proposes to provide greater support to that role. It values State responsibility and sovereignty, timeliness of the response and sustainability, cultural sensitivity and agency of affected communities. Yet, while localization often makes full sense in natural disaster response and development contexts, it is not always adequate in armed conflict and other situations of violence.

In the ICRC’s experience, two important qualifications must be borne in mind, that turn on issues of capacity and of humanitarian principles. In certain situations, local capacity may be so weakened or destroyed that it cannot respond sufficiently to meet people’s needs. In other situations, it may be strong enough but too politically biased, corrupt, restricted or intimidated to respond impartially in all areas affected by an armed conflict. The challenge for the ICRC is thus to make wise and principled judgments on localization in conflict, and to contribute its experience to advance the localization discussion in a meaningful manner.

In September 2017, the ICRC organized an internal workshop, facilitated by Groupe URD, with the following objectives:

Although the ICRC is first and foremost a direct implementer of humanitarian assistance and protection programs, it has a long track record of meaningful engagement and partnership with local and national actors in a variety of ways. The modalities and depth of engagement depend on the type of activities (e.g., assistance, protection or even promotion of international humanitarian law and prevention of IHL violations) and on the type of context (e.g., protracted conflict, on-going hostilities, post-conflict or urban violence). Support may take many different forms: from long-term commitment to strengthen the capacities of a National Society to sustained engagement with National IHL Committees to enable national authorities to live by their international obligations.

This workshop enabled the ICRC to reflect on opportunities to better support local and national actors to play their rightful role, both as responders and as duty-bearers. It also helped to identify risks associated with localization for impartial humanitarian action, for instance in contexts where national authorities are a party to an armed conflict or where civil society is fragmented and polarized due to conflict dynamics.

The on-going localization discussion provides momentum for the ICRC to look more deeply into its operational practice of engagement with a variety of local and national actors across different contexts. This will enable the organization to improve its own practice, but also to constructively contribute its rich operational experience in conflicts to inform the wider localization debate.

The ICRC is committed to contribute its experience in three areas which it will further explore in 2018:

It is hoped that this will contribute to better understanding of how to make principled humanitarian action ‘as local as possible’, while unpacking what ‘as international as necessary’ concretely means, especially in armed conflict and other situations of violence.

Jérémie Labbé has been working in the ICRC’s Policy and Humanitarian Diplomacy division since October 2016 and currently covers policy issues related to humanitarian principles, the RCRC Movement, localization and CVE/PVE. Prior to this, he spent two years as Head of Project, Principles Guiding Humanitarian Action. From 2010–2014, he worked at the International Peace Institute (IPI) in New York, developing a new programme on humanitarian affairs. He also worked several years for the ICRC as a field delegate and legal advisor, both at headquarters and in the field (India, Ethiopia, Sri Lanka, Madagascar and Iraq).

Other articles by Jérémie Labbé include:

[1] International Red Cross and Red Crescent Movement message to the World Humanitarian Summit, Resolution 3 adopted at the Council of Delegates of the International RCRC Movement, 7 December 2005, available at: http://rcrcconference.org/wp-content/uploads/2015/03/CD15-R3-message-to-WHS_EN.pdf

[2] In the Grand Bargain, Commitment 2, signatories commit to provide more support and funding tools to local and national responders ‘in making principled humanitarian action as local as possible and as international as necessary’.