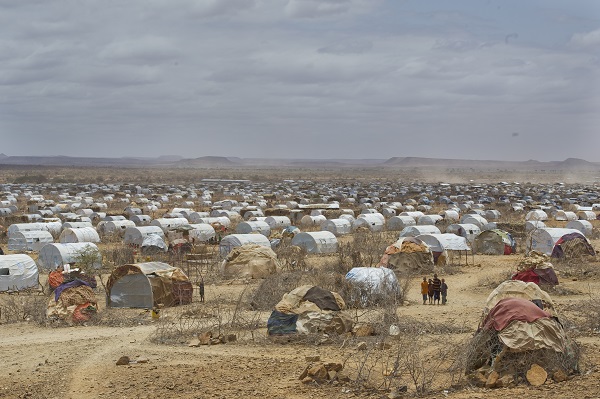 ‘It is not the movement of persons that is the problem, it is the movement of persons without the protection of fundamental rights and norms.’ Thus concludes the recently published report on Forced to flee: A multi-disciplinary conference on internal displacement, migration and refugee crises, supported among others by the ICRC and held last November at SOAS, University of London. Throughout history people have migrated in search of a better life—for a wide variety of reasons. Today, however, the extent of migration is challenging the international order and is accompanied by largely negative perceptions about migrants. In a sense, this is nothing new. History shows us that people on the move have often been treated as an inconvenience rather than as being entitled to humanitarian assistance and protection. Yet, all people who leave their homes—for whatever reason—deserve our respect and our support. In this context, labels matter. The labels chosen by observers determine the future of these vulnerable people in a very real and heart-rending way—whether they are called ‘economic migrants’, ‘forced migrants’, ‘internally displaced persons’ (IDPs) or ‘refugees’. In order to find truly sustainable solutions to the current crises of people on the move we must look beyond these labels. This blog post considers the scope of the global crisis, the negative labels placed on migrants, the historical use of these categories, and how we could respond in a better way.

The global reach of the crisis

The conference took place against the background of Europe’s continuing inability to deal humanely and effectively with the twin crises of refugees fleeing the armed conflict in Syria and economic migrants escaping poverty and deprivation in Africa, but also—as the report points out—of a less visible but much bigger crisis in the developing world: ‘Today, 86% of refugees are in developing countries; the top six host countries in Africa have three times the number of refugees as the top six in Europe.’

Quoting UNHCR data, the report states that: ‘In 2015, there were reportedly some 20 million refugees and 40 million internally displaced persons (IDPs) worldwide.’ However, it also points out that ‘In addition, there are many so-called “economic” migrants, who are also vulnerable to violence—including kidnapping, human trafficking, extortion and sexual violence—along the route to their destination, and many are detained or interned.’ Thus, Europe’s refugee crisis is in reality a relatively small part of a much greater global phenomenon of vulnerable people on the move—often at great personal risk. Speakers at the public event accompanying the conference emphasised that these people have not decided to leave their homes lightly; as the accompanying film produced by the British Red Cross put it, they have embarked on ‘journeys filled with resilience, determination, and uncertainty about the future’—and they are entitled to our respect and support rather than our indifference or hostility.

This brings us to the leitmotif of the conference: forced to flee. In a sense it is quite an unhelpful concept: who is to determine what constitutes being ‘forced’ when it comes to abandoning situations of conflict and violence, extreme poverty, or marginalisation? Contemporary discourse, at least in Europe and North America, distinguishes between ‘refugees’ and ‘migrants’. The implication is that while the former are forced to flee their homes, the latter do so of their own volition—and are therefore somehow less deserving of our sympathy. Although international law does reserve particular rights for refugees, and in that sense the distinction is valid, the terms ‘migrant’—and even more—‘immigrant’—have acquired decidedly negative connotations in contemporary western society. Thus, a phenomenon as old as the human race itself has been reconceptualised as a problem. But what seems to have happened also is that negative feelings about migration have been projected onto refugees, so that even those fleeing persecution no longer command our sympathy in a way they might once have done—and the force of international law is also diminished.

Perhaps the most obvious example of this is in the Mediterranean region, where economic migrants from Africa and refugees from Syria come together in a crazy and anarchic maelstrom of human misery. Both groups have undertaken hazardous journeys, often at the mercy of unscrupulous people traffickers—and yet neither is welcome in Europe. They are just contributors to ‘our’, i.e. Europe’s, problem, and Europe’s preferred solution is the questionable notion of ‘humanitarian border management’. This concept is, as contributors to the conference pointed out, fundamentally self-referential and contradictory—and is in fact an abuse of the word ‘humanitarian’: one can ‘manage’ people more or less ‘humanely’, but it certainly is not ‘humanitarian’ to take action that primarily serves the interests of the person taking it.

The conference’s starting point was that a deeper historical understanding of migration might enable contemporary society to deal with migration in a better way. Certainly, history reveals that the problems we face today are not new. But, sadly, it also reminds us of the enduring ability of States and other authorities to treat vulnerable people on the move as a threat to the established order and as a risk to be managed rather than as people at risk and in need of our protection. Refugees, IDPs, and other migrants have always been vulnerable to a realpolitik that puts their human rights second to the interests of the powerful.

For example, as the conference report explains: ‘Decolonisation exposed the limitations of the Refugee Convention, since its way of separating refugees, IDPs and economic migrants bore little resemblance to what was happening on the ground.’ In reality, people in colonial and postcolonial societies were displaced from their communities for a wide variety of reasons that defied such neat categorisations. Yet, the way they were categorized and treated depended more on what was convenient for the authorities than on the human rights of those displaced.

A similar conflation is evident in the treatment, in the 1980s, of hundreds of thousands of Vietnamese who took to small boats to escape the chaos in their country. The British government and the colonial authorities in Hong Kong quickly decided that those arriving there were economic migrants rather than refugees. These ‘economic’ migrants were kept behind barbed wire in detention centres—where some of them stayed for many years.

During the Cold War, those fleeing communism and coming to the West were welcomed as refugees because their flight supported the narrative of ‘The Evil Empire’ with which the West was in conflict. After the collapse of the Soviet Union ‘forced migrants’ became ‘economic migrants’—a burden on the West. Even when the countries of East and Central Europe became part of the European Union—with guaranteed free movement of people—their citizens’ desire to pursue economic opportunities in Western Europe became a political hot potato in the latter. It seems that while we embrace the free movement of capital we do not feel the same way about the free movement of labour, i.e. economic migration.

Today, would-be immigrants into the United States who have fled into Mexico from violence in Honduras, Guatemala, and El Salvador are still mostly treated as economic migrants regardless of the reasons that caused them to flee in the first place. One of the most heartbreaking stories at the conference was from a young woman from El Salvador whose husband had been murdered as a result of local political violence. Fearing for her own life she risked the journey to Mexico in an attempt to find safety in the United States. Her account of the dangers faced by a young woman travelling alone with her children as an illegal immigrant with no protection from various forms of exploitation encountered along the way was truly humbling—and shaming. (This and other cases are documented in a powerful report published by MSF in May 2017.)

Thus, whether someone is deemed to be a ‘forced migrant’ or an ‘economic migrant’ is likely to depend on the point of view of the observer. Certainly, the labels will mean nothing to those on the move and yet the labels that are chosen will frame the nature of the debate about their future: the fate of ‘refugees’ is discussed in one way and that of ‘migrants’ in another. Only by turning this through 180° and seeing things from the perspective of vulnerable people themselves can we claim any moral high ground in the way we respond to their situations.

It is not that international law is somehow absent from or unhelpful to this discussion. Admittedly, the Refugee Convention of 1951 contains a narrow definition of what it means to be a ‘refugee’. And this continues to cause problems for international agencies grappling with the issue of IDPs. The 1951 Convention provides protection for people who have crossed national borders but not for those who have been displaced in their own country. But, the Geneva Conventions of 1949 and the Additional Protocols of 1977, not to mention the International Convention on Civil and Political Rights of 1966, provide a clear framework for protection of vulnerable people whether they are on the move or not, and, depending on the convention, whether they are in situations of armed conflict or not. Greater respect for existing law would therefore be a good place to start. And let us not forget that the emerging norm of the Responsibility to Protect (R2P) originated precisely from the need to articulate the responsibilities of sovereign governments towards IDPs in their own country: the notion of ‘sovereignty as responsibility’. The framework is there if we choose to use it.

The bottom line is that people on the move have the same rights as everyone else, whatever it was that caused them to embark on their journey in the first place. Our inability to make this the starting point for how we engage with the challenge of protecting them is—or should be—a source of shame in a supposedly civilised international society.

Sir Michael Aaronson was chief executive of Save the Children UK from 1995–2005, having previously been the charity’s international director. His earlier career was in the UK Diplomatic Service, although he first worked in the relief action in Nigeria during the Biafran conflict. Mike is a founder member and was Chair of the Board of the Centre for Humanitarian Dialogue in Geneva. An Honorary Fellow of Nuffield College, Oxford, he is also an Honorary Visiting Professor and Director of cii—the Centre for International Intervention—at the University of Surrey. He chairs the Research Councils UK (RCUK) Strategic Advisory Group for the Global Challenges Research Fund (GCRF).