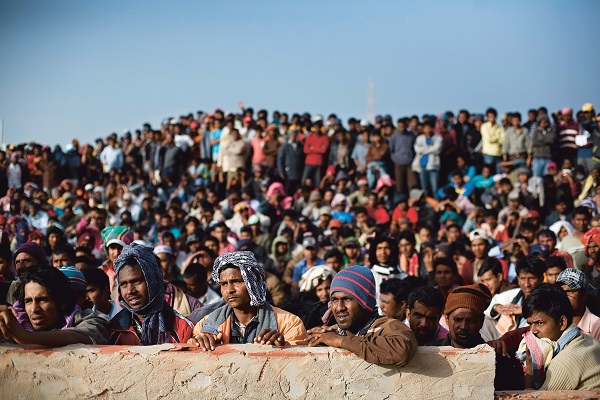 Refugees are protected by refugee law – mainly the Convention Relating to the Status of Refugees (1951) and the Convention Governing the Specific Aspects of Refugee Problems in Africa (1969) – and human rights law, and particularly by the principle of non-refoulement. They fall under the mandate of the Office of the United Nations High Commissioner for Refugees.

Refugees are also protected by IHL when they are in a State involved in an armed conflict. Refugees receive, besides the general protection afforded to civilians by IHL, special protection under the Fourth Geneva Convention and Additional Protocol I. For instance, Article 44 of the Fourth Geneva Convention specifies that Detaining Powers should not treat as enemy aliens refugees who do not, in fact, enjoy the protection of any government. Article 73 of Additional Protocol I adds that refugees must be regarded as protected persons in all circumstances and without any adverse distinction.

There is however no universal treaty that specifically addresses the protection needs of IDPs. The Convention for the Protection and Assistance of Internally Displaced Persons in Africa (Kampala Convention), which entered into force in December 2012, is the first international treaty to address the matter of protection and assistance for IDPs. IDPs are protected by various bodies of law, including domestic law, human rights law and – if they are in a State involved in armed conflict – IHL. The United Nations Guiding Principles on Internal Displacement (1998) is a non-binding instrument of importance for IDPs. These principles reflect existing international law and are widely recognized as providing an international framework for the protection of IDPs during all phases of displacement, including return, resettlement and reintegration.

The rules of IHL for the protection of civilians, if respected, can prevent displacement. Particular mention should be made of the rules prohibiting:
• direct attacks on civilians and civilian objects or indiscriminate attacks
• starvation of the civilian population and the destruction of objects indispensable to its survival
• collective punishment – which may take the form of destruction of dwellings.

IHL also expressly prohibits compelling civilians to leave their places of residence unless their security or imperative military reasons so demand.

All possible measures must be taken to ensure that displaced civilians have satisfactory conditions of shelter, hygiene, health, safety and nutrition, and that members of the same family are not separated. Rules requiring parties to a conflict to allow relief consignments to reach civilians in need also afford protection to IDPs.

Who is a refugee?

Article 1 of the Convention Relating to the Status of Refugees, as modified by the 1967 Protocol, defines a ‘refugee’ as any person who “owing to well-founded fear of being persecuted for reasons of race, religion, nationality, membership of a particular social group or political opinion, is outside the country of his nationality and is unable or, owing to such fear, is unwilling to avail himself of the protection of that country; or who, not having a nationality and being outside the country of his former habitual residence as a result of such events, is unable or, owing to such fear, is unwilling to return to it.”
The Convention Governing the Specific Aspects of Refugee Problems in Africa (1969) and the Cartagena Declaration (1984) on refugees have adopted a broader definition that includes people fleeing events that seriously disrupt public order, such as armed conflicts and other situations of violence.

Who is an IDP?

The United Nations Guiding Principles on Internal Displacement (1998) defines IDPS as “persons or groups of persons who have been forced or obliged to flee or to leave their homes or places of habitual residence, in particular as a result of or in order to avoid the effects of armed conflict, situations of generalized violence, violations of human rights or natural or human-made disasters, and who have not crossed an internationally recognized State border.”

Migrants caught up in armed conflict

There is no universally accepted definition of ‘migrant’ and the decision to migrate can be ‘voluntary’ or ‘forced’, although labels are much less clear-cut than in the past. Rapidonset events such as armed conflict or disaster may be the immediate reason forcing people to leave their homes. The search for better economic opportunities, slow-onset and progressive environmental degradation, increasing suppression of rights (especially for minorities) and the availability of family networks in more stable locations may determine precisely where migrants move and for how long. The term ‘mixed migration’ is now used to describe the flight from armed conflict of asylum seekers, refugees and stateless people mingled with labour migrants; ‘mixed migration’ describes both the situation and the combination of factors that cause such shifts of population.

Many migrants will not qualify as refugees and, when they cross an international border, are, by definition, not internally displaced. Regardless of the initial cause of their displacement (or migration), the vulnerability and protection needs of these people, and the threats to their human rights that they are exposed to during their journey – including human trafficking – cannot be minimized.