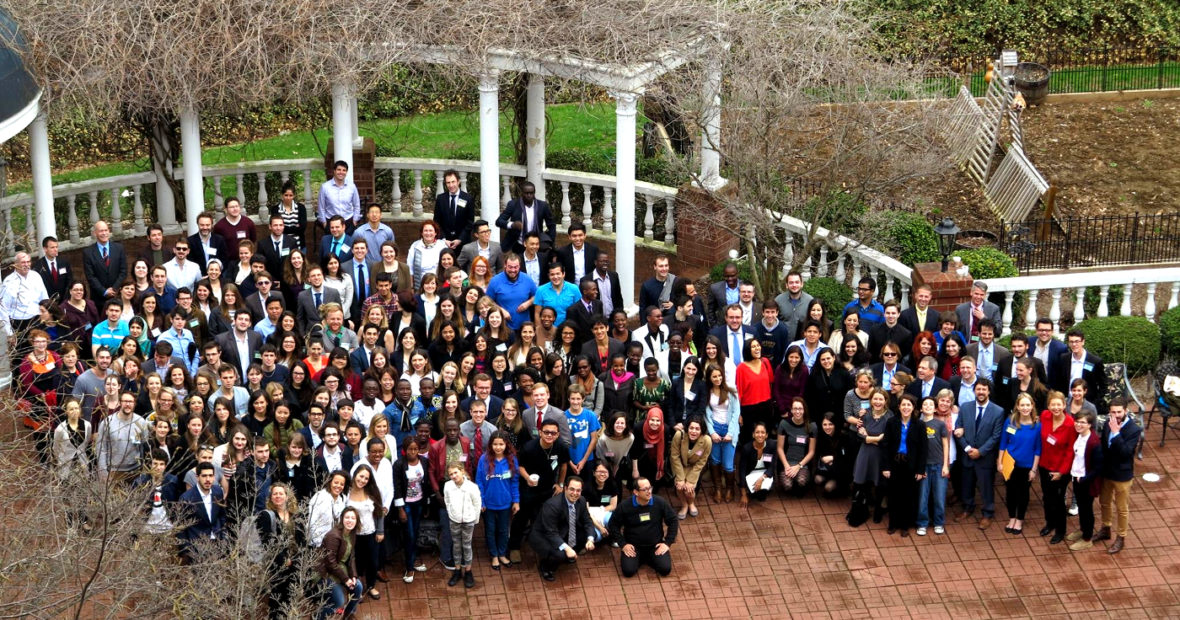 Participants and volunteers of the 27th edition of the Jean Pictet Competition, in Charlottesville, VA, United States, April 2015. © CCJP

Apart from the renowned Jean-Pictet Competition, there are dozens of student competitions in international humanitarian law (IHL) organized worldwide, with or without the support of the ICRC. While these events vary in terms of format, ranging from role play and moot courts to debating tournaments, all of them have the same objective: “taking the law out of the books.” One such example is the National IHL Competition in Georgia, which has been attracting the attention of students for 15 years already. Beyond the immediate opportunities they procure in terms of IHL promotion and professional networking, why do such events matter in the long run? How do they contribute to building an environment conducive to respect for life, dignity, and impartial humanitarian action, and arguably to maintaining or restoring peace?

The ICRC organizes or supports IHL competitions across the world with the purpose of engaging students, that is to say future humanitarian or military personnel, lawyers and magistrates, decision-makers and members of the civil society at large. Around 30 IHL competitions take place at national and four at regional level generally on a yearly basis, and even in countries caught up in armed conflicts or other situations of violence. The Jean-Pictet Competition, a global event organized by an independent committee with the support of the ICRC, gathers more than a hundred students in a different location every year since 1989. Today, there are more than 3,000 alumni of the Pictet Competition on five continents, a certain number of them working in different capacities in the humanitarian sector and related fields.

Student competitions in IHL play a decisive role in building an environment conducive to respect for humanitarian norms and values, and in creating networks of professionals knowledgeable of such norms and sharing those values. This is especially important when some of those individuals end up on different sides of an armed conflict at a later stage, as it helps uphold law-grounded reasoning and foster discussions on respecting and implementing IHL. The example of countries like Georgia illustrate how alumni of the National IHL Competition can find themselves among decision-makers in times of armed conflict and make a real change with positive impact when such humanitarian issues arise in real life.

In 15 years of existence, the annual National IHL Competition in Georgia has significantly contributed to the promotion and dissemination of knowledge on IHL in the country. First organized by the ICRC delegation in Tbilisi in 2001 in partnership with the European Law Students Association (ELSA), it is still one of the most important national events for students of law, international law and international relations. Most recently, the 2016 edition of this IHL competition has also attracted the interest of the students of the National Defence Academy. In simulations based on fictitious cases, the participants addressed various legal questions and humanitarian issues, some of which have been particularly relevant in armed conflicts in Georgia in 1990s and in 2008. The National IHL Competition serves as means to open the debate on various humanitarian and legal questions related to conflicts in Georgia or elsewhere, not only among the participants and the alumni, but also their friends and colleagues through social media and other fora.

The National Competition has also played important role in the process of implementation of IHL in Georgia. Up until now, out of around 270 former participants of the IHL competition, some have taken up posts not only in different Ministries and other decision-making State institutions in charge of national implementation of IHL, but also in academia. Most notably, in their respective official capacities the alumni have been actively involved in the creation and the subsequent day-to-day work of the Inter-Agency Commission for the Implementation of International Humanitarian Law, which brings together representatives of all relevant stakeholders in charge of national implementation of IHL in Georgia. Other important initiatives of the competition’s alumni in the field of IHL dissemination include, most importantly, the creation of the Georgian language IHL database SHSplatforma, which brings together useful materials on IHL and related fields of law. 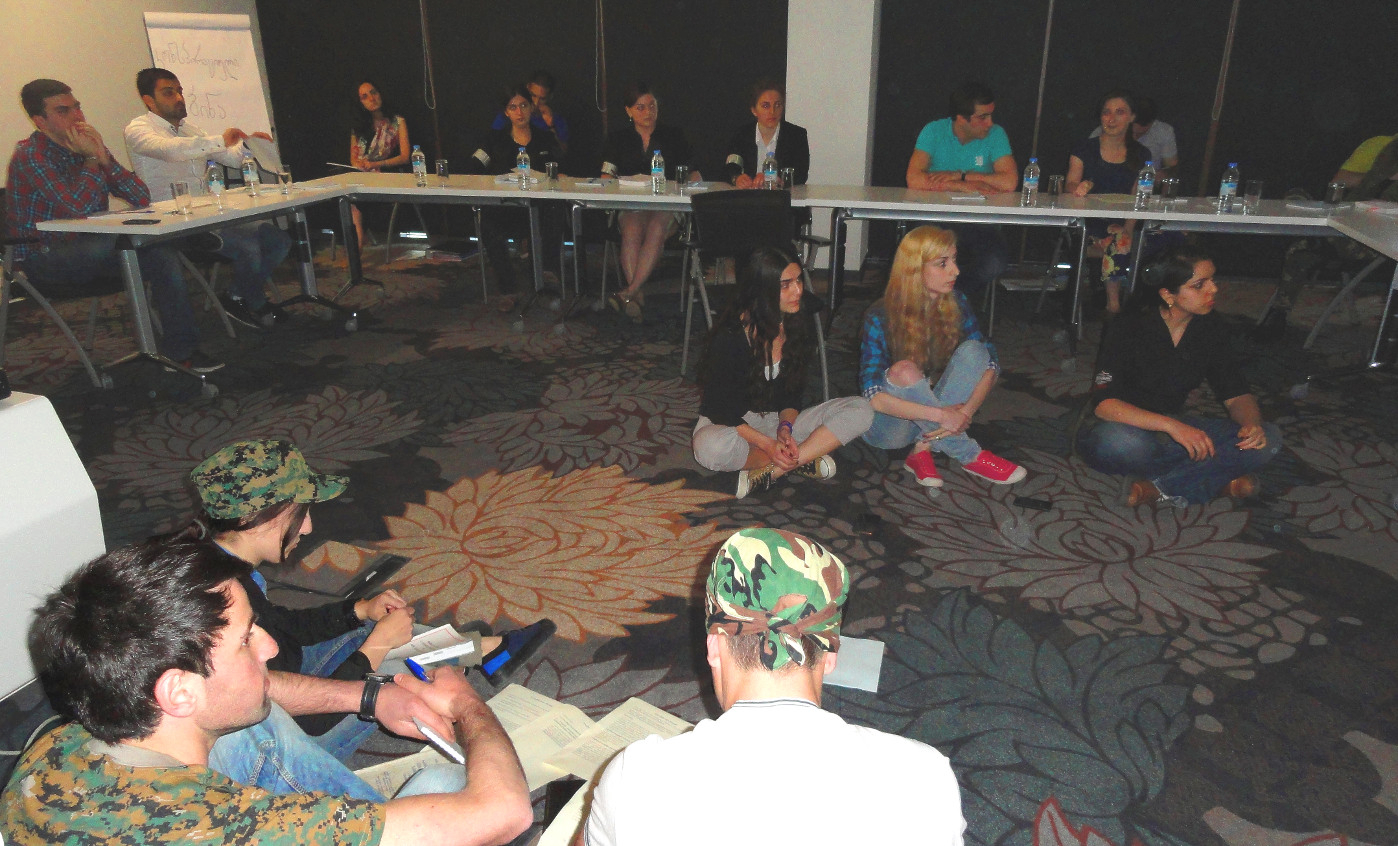 With an increase in interest from university students from the capital and across different regions of Georgia, various important actors have joined the ICRC in its efforts to hold the National IHL Competition on annual basis. It is now jointly organized by the ICRC and the Ministry of Justice of Georgia, in partnership with the Georgian Red Cross Society. The alumni of the IHL competition also provide strong support through delivering extensive two-week lecture series for the participants of the event on IHL and related fields, as well as serving as jury members or tutors. The fact that both the government and alumni are involved to support the competition is an encouraging sign for its sustainable anchoring within the legal and social environment in Georgia.

Experiencing humanitarian norms and values while defining a career path

Aimed at enabling students to apply the law ‘on the spot’ to ‘real’ situations, IHL competitions consist of simulations in which participants need to demonstrate their knowledge of IHL by endorsing different roles and adjusting presentation and argumentation to different situations. As ICRC delegates, legal advisers to military commanders or members of armed groups, students argue and negotiate on current humanitarian and legal issues, such as the use of drones in today’s armed conflicts, or the protection of hospitals and medical staff on the battlefield.

Student IHL competitions also offer a unique cultural and personal experience. They enable students with diverse cultural and social backgrounds, sometimes even from countries and contexts caught up in armed conflict, to gather in a friendly and informal atmosphere, and exchange their views face-to-face. Such setting helps them reflect on our common humanity – the very idea laying at the core of humanitarian norms and values – and understand how lack of respect for them bear similar long-lasting consequences for each and every individual, whatever her or his origin, nationality, religion, political views, etc.

Apart from tremendous experiential learning, IHL competitions also give young students a chance to expand their professional circles and embrace careers in those fields afterwards. Jury members, coaches, tutors and others involved in the organization of these events are often professionals in the field of IHL, human rights, international criminal law or academia, who can provide helpful advices and perspectives about the profession. Strong alumni circles have also proved to be a great advantage and avenues for informal and professional exchanges among IHL competitions’ alumni.

Excerpts from two surveys conducted among some 471 Jean-Pictet Competition participants in total confirm such findings. In the first survey conducted among 144 participants in the 2016 Jean-Pictet Competition, 89,6% of the respondents agreed that the Competition brings unique cultural perspectives in a stimulating, multi-cultural environment and helps understand the world differently, while 68,75% answered that the Competition had enhanced their knowledge of IHL. In the second survey conducted among 327 Jean-Pictet competition alumni since the first edition in 1989, 92,96% answered that, since their initial participation in the competition, they had been regularly involved in activities or dealing with issues related to the promotion, implementation and integration of IHL and/or related fields (37,09% at least on a weekly basis, 24,41% monthly and 31,46 % yearly); 36,4 % of the alumni strongly agreed and 34,56% agreed that the participation in the Pictet Competition influenced the development of their career path.

Building an environment conducive to respect for life and dignity

The chronic humanitarian problems we witness nowadays in armed conflicts and other situations of violence across the globe are largely caused by violations of the law. They illustrate how – beyond addressing the ensuing humanitarian needs – preventing them should be massively encouraged at all times, by all means, and at all levels. The law itself envisages the obligation to disseminate IHL. Along with States (the primary duty-bearers of this obligation) and National Red Cross and Red Crescent Societies, the ICRC is involved in a variety of activities in this domain.

Its Prevention Policy sets out that activities in the field of prevention are aimed at building “[a]n environment conducive to respect for life and dignity and for the ICRC’s work.” This notion could be defined as the human environment surrounding humanitarian work at the local, regional and universal scales. It could also be compared to a flow: if taking place in an environment prompt to support lack of respect for humanitarian norms and values, humanitarian relief efforts will probably go against the flow and might have more limited results than if such efforts took place in an environment conducive to respect and support for such norms and values. In the latter case, such relief efforts will have more chances to be pushed ahead by the flow, and their results amplified accordingly. Of course, building such an environment can only be foreseen and achieved over mid to long-term period, and requires as much imagination as persistence.

The roles of international, regional and national IHL competitions in building an environment conducive to respect for life, dignity, and impartial humanitarian action are complementary. However, some challenges lie in the lack of proper visibility of and support for such events. This might partly be linked to the very nature and objectives of the work on the prevention of IHL violations: in general, its outcomes and success stories rather appear after a certain number of years and can less be easily reported about than, for example, the results of projects in the field of humanitarian assistance. Student competitions aim for longer-term impact. This does certainly not make them less useful than food distributions for instance, as the former aims to build a human environment that enables and supports the latter. It would therefore be an unforgivable mistake to oppose the two sides of the same ‘humanitarian coin’.

In years to come, it is crucial that the complementarity between those different modes of humanitarian action is better understood and supported by humanitarian actors, donors and the civil society at large. Only then will humanitarian actors be able to alleviate suffering more efficiently and for a longer time in current situations of armed conflicts and violence, and will societies have a better chance to prevent new ones from erupting in the future.

Etienne Kuster (ekuster@icrc.org) is Adviser for relations with academic circles at the International Committee of the Red Cross (ICRC).

George Dvaladze (george.dvaladze@gmail.com) is an editorial assistant at the International Review of the Red Cross.