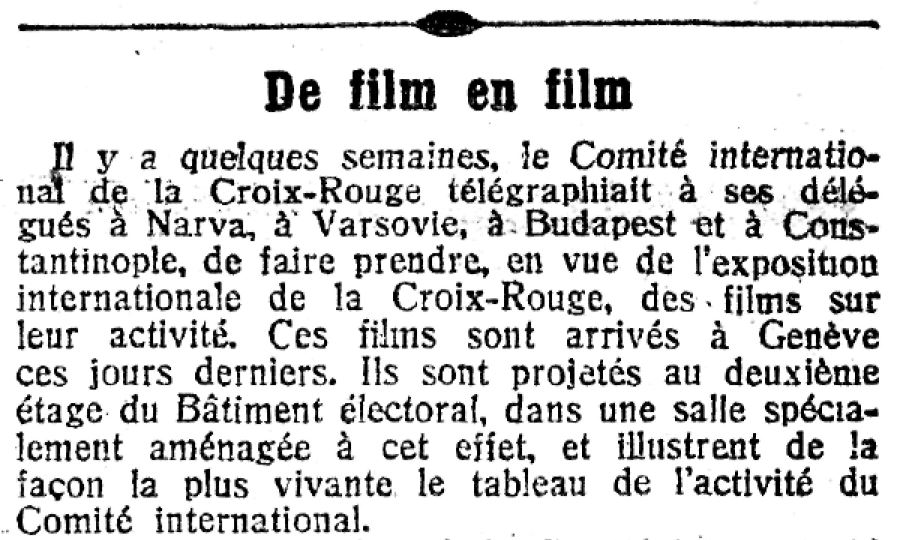 For the past 15 years, World Day for Audiovisual Heritage has been celebrated on October 27th. This year, the theme is Do you remember?

Let us remember that 2021 marks the 100th anniversary of the International Committee of the Red Cross (ICRC) first films. The four documentaries screened at the 10th International Red Cross Conference in the spring of 1921 report the aftermath of WWI and the activities of the ICRC in favor of prisoners of war and civilian population. At that time, the ICRC had already been using photography to document its activities for some years.

While it is still possible to read medieval manuscripts or view the first photographs of the 19th century, other audiovisual documents require equipment to be played back, equipment that becomes unusable as soon as its parts break and no one knows how to repair it. This is what is known as double obsolescence.

Faced with this worrying truth, and to prevent whole sections of the world’s memory of the 20th and 21st centuries from disappearing, UNESCO decided in 2007 to create a World Day for Audiovisual Heritage in order to raise awareness among the public opinion and authorities of the need to preserve this heritage.

In response to the theme of this Day, let us remember that a century ago, the ICRC was already telling its story through photographs and films.

Photos of ICRC’s activities during WWI

Watch in its entirety (approx. 17′) the film International Red Cross Committee : repatriating of prisoners of war..

Watch the short (approx. 3′) documentary about the repatriation of prisoners of war..