The new quarterly IHL Bibliography is out! As usual, it presents references to English and French publications on IHL based on books and articles available at the ICRC Library. Once again, the ICRC librarians highlighted some noteworthy documents:

The conduct of hostilities and international humanitarian law : challenges of 21st century warfare

ational Law Association Study Group on the Conduct of hostilities in the 21st century has released its much awaited final report! Five years after its first meeting, the study group presents a report that sheds light on crucial questions related the principles of distinction, proportionality and precautions in contemporary warfare, examining whether those core IHL rules are still sufficient to regulate new kinds of conflicts.

Taking no prisoners : the need for an additional protocol governing detention in non-international armed conflicts

In this piece, Major Brittany R. Warren, Judge Advocate of the United States Army, addresses another contemporary challenge to IHL: the rules governing detention in non-international armed conflicts (NIACs). Although this topical issue has already drawn its share of attention from both scholars and practitioners as well as the ICRC, Major Warren’s takes an inventive approach suggesting the adoption – and even proposing the text for – a Fourth Additional Protocol to the Geneva Conventions of 1949 which would deal with deprivation of liberty in relation to NIACs. 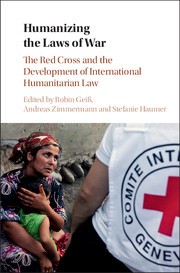 Humanizing the laws of war : the Red Cross and the development of international humanitarian law

Chapter I and II of this book focus on the role and influence of the ICRC in the adoption of the Geneva Conventions of 1949 and their additional Protocols of 1977. It provides an insightful narrative that will perfectly complement this new research guide on the drafting history of the Geneva Convention, as well as the upcoming research guide on the Additional Protocols.