The new IHL Bibliography is out! As usual, it presents references to English and French publications on IHL based on books and articles available at the ICRC Library. As of 2018, the bibliography will be published every four months (three issues per year). Once again, the ICRC librarians highlighted some noteworthy documents: 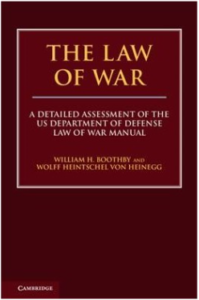 In 2015, the United States Department of Defense (DoD) published its long-awaited Law of War Manual making a significant statement on the position of the US government on many IHL matters, such as torture, military objectives and expanding bullets. William H. Boothby and Wolff Heintschel von Heinegg offer an in-depth review of the Manual on a paragraph-by-paragraph, line-by-line and word-by-word basis. Several other recent acquisitions of the Library focus on this Manual: Failing our troops : a critical assessment of the Department of Defense law of war manual, by David W. Glazier, offers a very critical review thereof. In Totality of the circumstances : the DoD law of war manual and the evolving notion of direct participation in hostilities, Ryan T. Krebsbach, Judge Advocate currently serving as an Operational Law Attorney at U.S. Pacific Command, compares the ICRC and the DoD Law of War Manual’s views on the notion of direct participation in hostilities.

This article discusses certain means and methods of warfare prohibited under humanitarian law. While some of them – for instance chemical weapons – are considered particularly reprehensible, others – such as riot control agents, expanding bullets and plain-clothed personnel – are widely used by police in peace time. Yet, these weapons and tactics may also have a role to play in modern military operations, which often involve complex mandates and a broad range of tasks such as maintaining law and order in volatile security situations and taking forcible measures against members of organized armed groups, criminal gangs or pirates. Cornelius Wiesener examines the interplay between human rights law and humanitarian law in relation to those means and methods that have so far received limited scholarly attention. 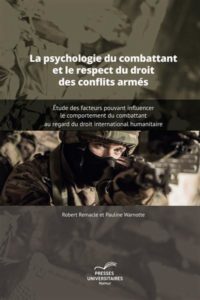 This publication outlines the environment in which the combatant evolves during an armed conflict and analyses factors that may cause him or her to commit IHL violations. It primarily focuses on troops fighting on the ground (boots on the ground). Robert Remacle, colonel (retired) who initiated the IHL teaching programme at the Belgian Ministry of Defense, and Pauline Warnotte, officer and legal adviser in the same Ministry, examine the main factors that can cause IHL violations: the preparation of military operations, personal bonds between combatants, the enemy, combat tactics, teaching and training, lack of experience and discipline, sanctions or impunity. Those interested in the topic are encouraged to read the ICRC landmark study Roots of Restraint in War, launched in June 2018. Based on a two-year research collaboration between the ICRC and six distinguished scholars, it identifies sources of influence on various types of armed forces and groups. It will be interesting to compare the two publications’ findings.