Histories of humanitarianism often cite two specific examples of nineteenth century humanitarianism: the latter parts of slave abolition movements and the founding of the Red Cross in Geneva in 1863. Besides these, particularly for the early part of the century, specific examples of humanitarian activities remain rare, with general references to philanthropic as well as social and religious reform movements prevailing. I would like to argue here that this is because humanitarian endeavours in the early Nineteenth Century in Europe and North America developed in local contexts, making it difficult and cumbersome to join the various ʿdotsʾ of humanitarian activities that existed. By linking such ʿdotsʾ – like doing children’s ʿdot to dotʾ drawing, hence the title of this blog post – a more precise picture of early humanitarianism might emerge. This blog post will demonstrate the benefits of such an approach through two concrete examples: the connections between the founding of the Red Cross Movement and an early foreign aid movement 40 years earlier, both in the locality of Geneva.

The first ʿgroup of dotsʾ concerns the philhellenic activities undertaken by private Geneva citizens in the course of the 1820s in support of the Greeks in their War of Independence against the Ottoman Empire. To be precise, two different Geneva Greek Committees were set up, the first active in 1822-1823, and a second founded in 1825 and active until the Battle of Navarino in October 1827. The leading force in the latter Committee was the wealthy Geneva citizen, Jean-Gabriel Eynard (1772-1863), who had been to the Vienna Congress a few years earlier. He was joined by 26 others, including the writers and politicians J.C.L. Simonde de Sismondi (1773-1842) and Etienne Dumont (1759-1829). This second Committee used the donations collected in Geneva and elsewhere to send shiploads of food and ammunition to support the fighting Greeks. These shipments were accompanied by representatives of the Committee, including the doctor, Louis-André Gosse (1801-1873). To stress, the label ‘humanitarian’ only partly fits these foreign aid undertakings, particularly given the military support and the parallel developmental focus that can be found.

The second ʿdotsʾ is better known: the 1863 founding of the Red Cross Movement initiated by five Geneva citizens including Henri Dunant (1828-1910), Gustav Moynier (1826-1910), General Guillaume-Henri Dufour (1787-1875), and Dr Louis Appia (1818-1889). Having witnessed the suffering of wounded soldiers in the battle of Solferino in 1859, the Geneva businessman Dunant published a pamphlet calling for international action to ensure care and protection of wounded soldiers and their helpers. The young Geneva lawyer Moynier, an acquaintance of Dunant, took this idea to the Geneva Society for Public Utility, whose president at this time was Dufour. Here, a sub-committee to implement Dunant’s ideas was formed, leading to the first international conference held in Geneva in 1863.

While nearly 40 years apart, these two ʿgroups of dotsʾ have specific links. An early type of photograph exists of the two key protagonists, Eynard and Dunant, dating from the early 1850s. 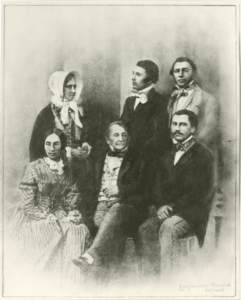 Jean-Gabriel Eynard in the middle and Henry Dunant at the left, Bibliotheque de Geneve.

Eynard was an early enthusiast of daguerreotypes, taking a few hundred in the 1840s and 1850s, generally of his extended family. Dunant was a friend of Ernest de Traz (1830-1900), also on this daguerreotype, a great-nephew of Eynard. De Traz and Dunant commenced religious meetings of young men in the late 1840s, leading to the formation of the “Union Chrétienne des Jeunes Gens de Geneva” in the early 1850s. In addition, occasional correspondence between Dunant and Eynard’s wife, Anna Eynard Lullin (1793-1868) has survived, for example regarding her support for the 1863 Red Cross conference (BPU Ms 2109 f. 57, 179). Eynard’s son-in-law and nephew, Charles Eynard-Eynard (1808-1876) also corresponded with Dunant throughout the 1860s (ibid., f. 6, 288, 296 etc.). Charles Eynard appears to have been close to Dunant through their joint religious affiliation to the ‘Reveil’, the Geneva evangelist movement of the mid-century (BPU Ms fr 2115 H).

In addition, there are more ‘connected dots’ between the Geneva Greek Committees of the 1820s and the Red Cross Committee many years later. Dufour, for example, can be found advising Eynard in 1826 about sending European soldiers and commanders to Greece to support the fighting (BPU Ms suppl 1885 f. 202, 217, 227). The doctor, Gosse, who went to Greece in the 1820s, reappears as a correspondent of the Red Cross founder, Doctor Appia, in the 1860s (BPU Ms suppl 2662 f. 19-23) and as a fellow delegate of Moynier at a philanthropic conference in Berlin in 1856 (Durand p. 29). Indeed, the 1820s origin of the Geneva “Societé de la Utilité Publique” goes back to the Greek Committee members Sismondi and Dumont (Senarclens p. 13). Finally, in Greek Committee subscription lists, the Moynier and Dunant family names can be found (BPU Ms suppl 1891 f. 90-91), as well as a donation from Dufour himself (ibid. f. 16). Henri Dunant’s father apparently gave a young Greek student a temporary home in his house in 1828 (Bouvier-Bron p. 31), possibly arranged through the Greek Committee. Finally, when comparing the sixteen founding members of the 1860s local Geneva Red Cross Society (Durant p. 18), as opposed to the international committee of five citizens mentioned above, with the 1820s Greek Committees, the family names of Eynard, Hensch, Kunkler and Pictet overlap.

Linking these ‘dots’ should not be misunderstood as an attempt to create a narrative arc between these two movements, in the sense of Dunant and his cofounders taking up lessons learnt from the experience of their philhellenic compatriots 40 years earlier. After all, the raison d’être of these movements differ: Greek Committees were concerned with a people obtaining independence, a one-off event, and only some of their activities fall into the realm of humanitarianism. The Red Cross Committee’s key concern was seeking wide and general protection of wounded soldiers in the long-term, and generally represents a purer form of humanitarianism.

Nevertheless, drawing connections between the two movements serves to illustrate that the Red Cross movement did not develop in a vacuum, but that it belongs to profound, sometimes very local, traditions of charity, philanthropy and political engagement of citizens, with particular links to protestant evangelical milieus. The founding fathers of the Red Cross could thus draw inspiration from the endeavours, success and prestige of people like Jean-Gabriel Eynard, who combined helping distant sufferers with networking in the highest circles of European society and politics. At the same time, potential ambiguous motives appear: was Dunant inspired by Eynard not only in the sense of practical organisations of networks through correspondence and travels, but also in the sense of aspiring to follow Eynard’s example to obtain the same high social standing in his home town, and to secure a similar financial situation by combining philanthropy with successful banking businesses?

To conclude, the lines between the ʿdotsʾ described in this blog post are best represented as thin lines, rather than as thick arrows, which link in with many other ʿdotsʾ. Some of these will not belong on a drawing of exclusively humanitarian activities in a contemporary sense. Finding them may require going down to the level of localities – such as Geneva – and of individual persons – such as Dunant and Eynard – by using personal archives and local libraries. Through such ‘bottom-up’ research endeavours, a multi-dimensional picture of how and where humanitarian activities developed in the early Nineteenth Century may eventually emerge, which will enhance the background understanding of how and where key moments, such as the founding of the Red Cross, happened.