My tale of an unusual research in the Tracing Archives

In the summer of 2020, Wolfgang Maass and his wife Renate received an unexpected call. An archivist in the German town of Thale, where they lived, wanted to know if Wolfgang was the son of a certain Willi Maass, born on 20 April 1913 in Quedlinburg. When he said that he was, the archivist explained that a British woman by the name of Ena Gowland (née Stephenson) was looking for him, and had met his father 74 years ago …
The story began in England during the Second World War. Ena Stephenson was 14 and lived with her parents, brothers and sisters on a dairy farm at Copley Bent, near Butterknowle, in the north of England. With the milk produced by their 18 cows, the family supplied milk to the neighbouring village.
Willi was sent to the work on the Stephenson’s farm as a prisoner of war in 1946. Originally from Saxony-Anhalt, Willi had been in the Luftwaffe and was captured by US forces on 24 June 1944 at the Battle of Cherbourg while fighting in an air defence unit. He was initially held in the United States, before being transferred to Britain on 30 April 1946.
Willi was held at Harperley Camp No. 93 and was sent to work on the farm every morning. He quickly struck up a friendship with the British family. Ena remembers him as a tall man – as tall as her father (nearly six feet) – hard-working and with a good sense of humour. He even became a local hero after he repaired the village mill. (Willi had worked in a mill before the war.) According to Ena, the family felt no resentment towards this former member of the Luftwaffe: “We hated Hitler, but we didn’t hate all Germans. There was never any animosity between the family and the prisoners of war who worked with us.”
Willi was particularly fond of Ena’s brother Eric, who was eight years old at the time. Did he remind him of his own son perhaps, a boy he hadn’t seen for several years who must have been around the same age?
That December, Willi was invited to their farm to share in the family’s Christmas meal. It was the first time the British government had allowed this kind of fraternization to take place between German prisoners of war and British civilians. Willi made a present for each member of the family: toys for the children and slippers for the parents. For Ena, he made a toilet bag out of his uniform, with his name and prisoner-of-war number clearly indicated on the inside. 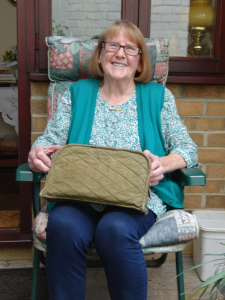 Ena with the toilet bag

Nearly three-quarters of a century later, Ena can still remember the joy she felt when she received her present. She has kept it all these years, but now her most ardent wish is to give it to Willi’s family. The question was how?
The answer lay in the ICRC’s archives, which she contacted thanks to Kevin Richardson, the chairman of the Evenwood Ramshaw and District History Society, a local historical association. The files on German soldiers in the Second World War brought up all the information available about Willi Maass: place and date of birth, parents’ names, family address, places of detention, etc. All the information was sent to Richardson in June 2020. 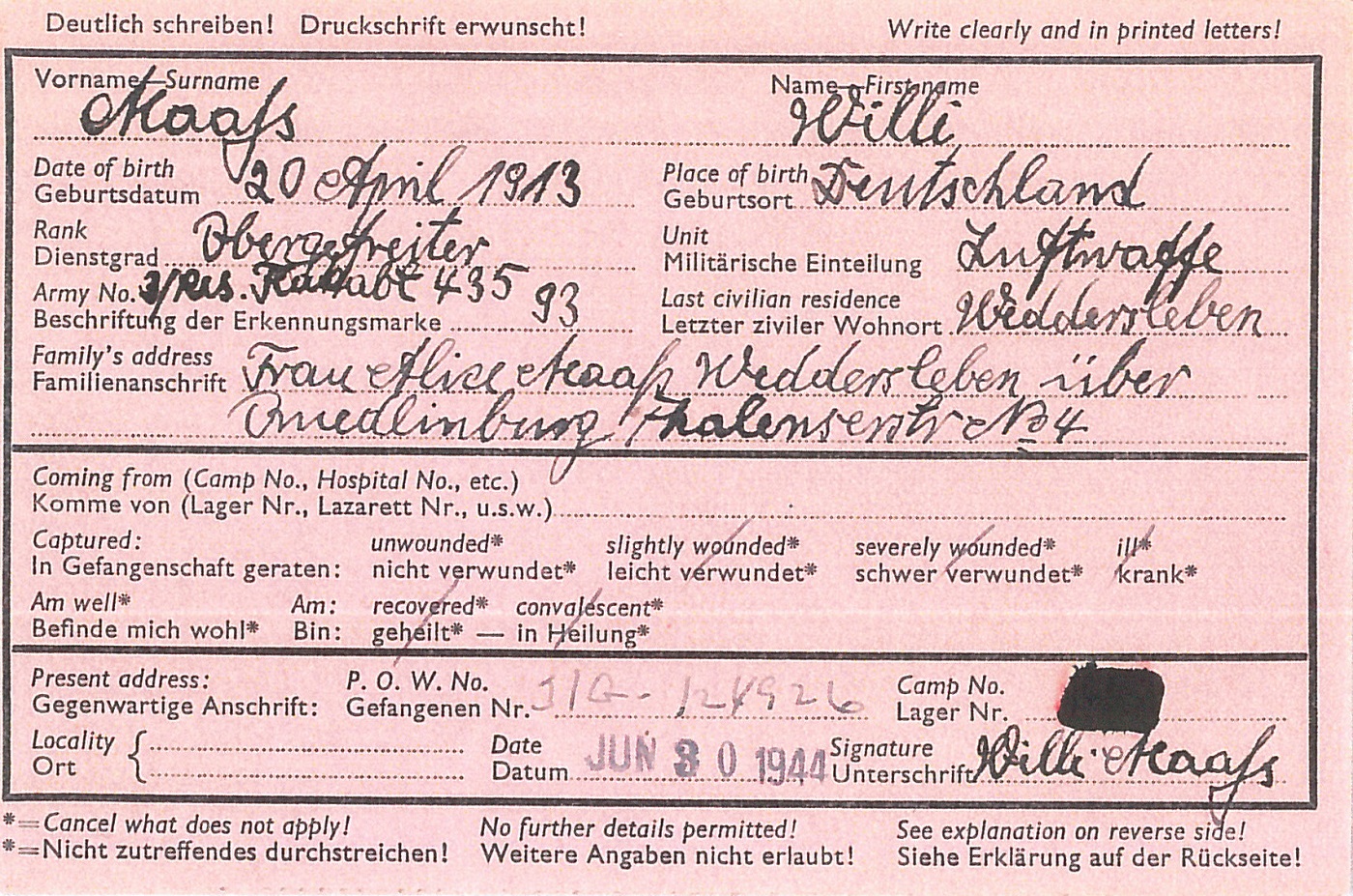 With the help of a few more people, especially in Germany, Ena and Kevin managed to track down Willi’s son, Wolfgang, and daughter, Edith. They found out that Willi divorced shortly after returning from the war and started a new life in Western Germany. His children lost touch with him and unfortunately did not have any photos of him.
After this initial contact, Ena sent the toilet bag to Wolfgang and Edith by post. She was happy to have got her wish. But, if the situation allows it next year, she would like to go to Germany to visit Willi’s children.
This story, one of many, shows why it is so important to keep archives and to make them available to the public. Documents in the archives can be put to a new use many decades on. 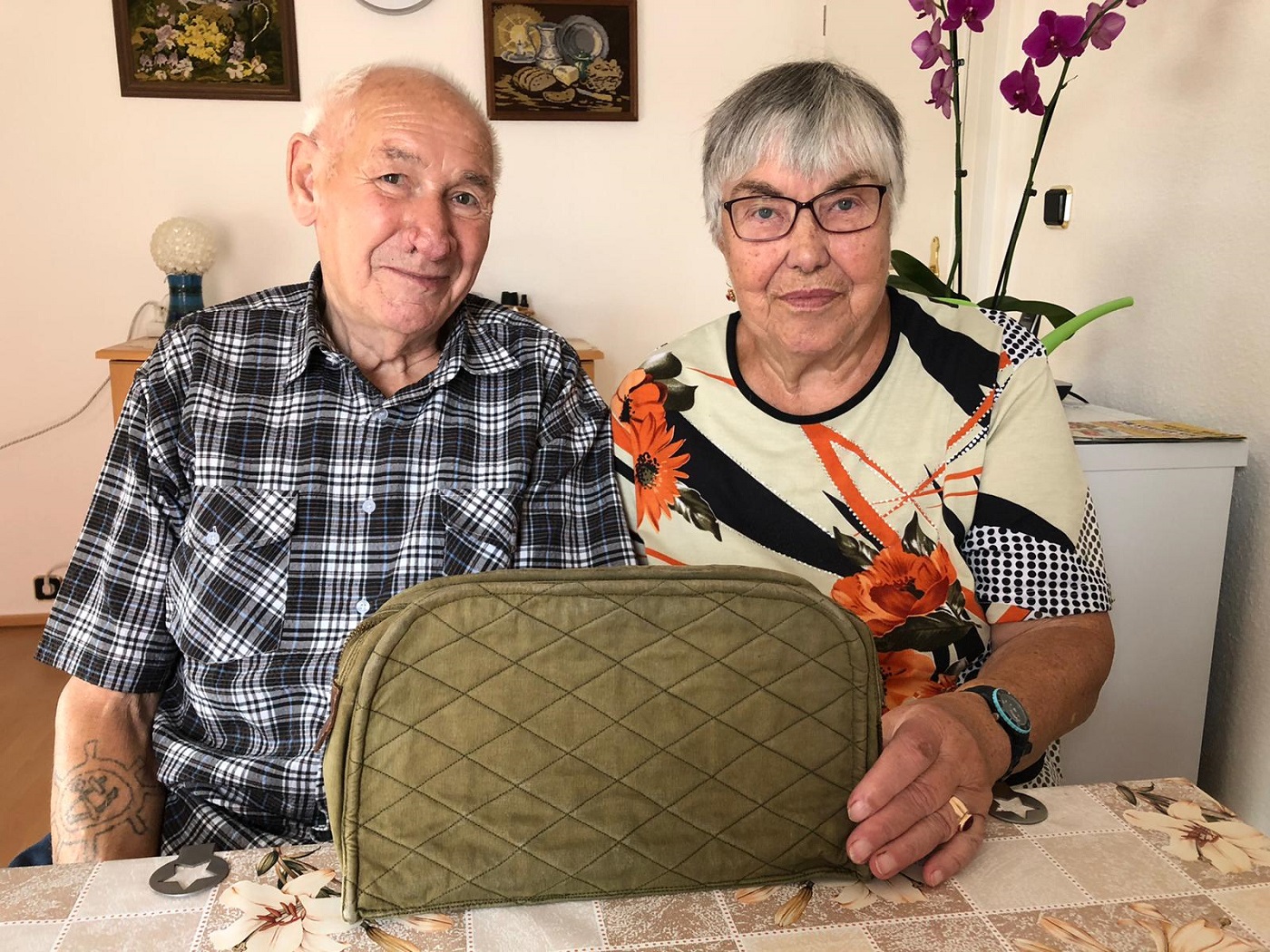