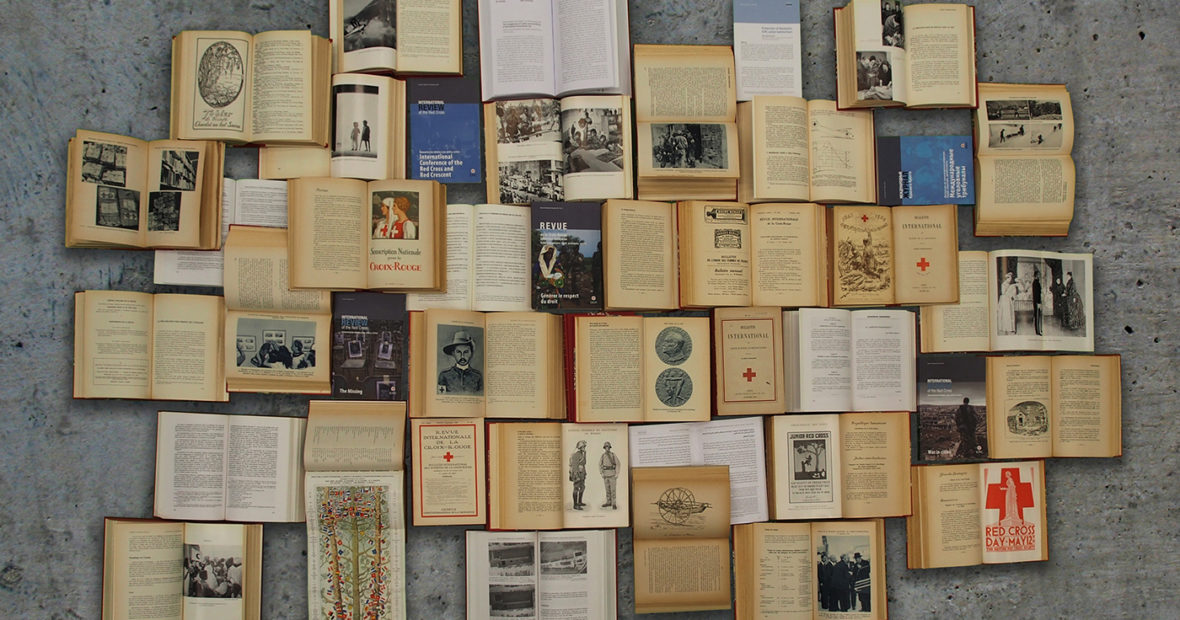 In 1869, the world was changing at a remarkable pace. Russian chemist Dimitri Mendeleev developed the periodic table of elements, Friedrich Miescher discovered DNA, the Suez Canal opened for navigation, the moving picture projector was patented, and in October 1869 the first Bulletin International des Sociétés de Secours aux Militaires Blessés, precursor to the International Review of the Red Cross, was published by the International Committee of the Red Cross (ICRC). The journal began as a platform for an emerging movement of relief societies that is now the International Red Cross and Red Crescent Movement. Over its history the journal evolved, becoming first a mouthpiece for the ICRC, later a specialized legal journal and now a peer-reviewed academic journal that is a multidisciplinary platform for discussion and debate related to international humanitarian law, policy and action.

Through all these changes, as you can read in the anniversary edition, out now “the Review has always been driven by the humanitarian imperative of the founders of the International Red Cross and Red Crescent Movement. The changing nature of crises has constantly challenged humanitarian thinkers to come up with practical new solutions, be they of a political or a legal nature. Throughout its history, the Review has had the distinction of driving this debate forward at all levels, from practice to theory to policy.”

Today the rich history of the International Review of the Red Cross can be read on the more than 110,000 pages that it has published so far, available for free on the journal’s new website. To mark the occasion of its 150th anniversary, the journal produced a special edition exploring how it reflects the evolution of warfare and humanitarian action over the past century and a half. In this edition, titled “150 Years of Humanitarian Reflection“, several authors reflect on the broader trends in humanitarian law, policy and action that can be observed through the lens of the Review.

That first edition of the Bulletin opened with an “Avant-Propos” describing the journal as “propaganda” in favour of the Red Cross. Later renamed the Bulletin International des Sociétés de Secours, the journal was initially a platform for the relief societies that would eventually become the National Red Cross and Red Crescent Societies we know today. As seen in the contents of the first edition, in its pages they published reports of their activities, as well as articles related to developments in medical technologies, reviews of scholarly works related to humanitarian action, and suggestions from the ICRC for the further development and promotion of norms protecting the sick and wounded on the battlefield and of the growing movement of relief societies set up for their benefit.

Because the relief societies were so linked to the first Geneva Convention of 1864— which established the obligation to provide relief to the wounded and sick, the neutrality of medical personnel, establishments and units, and the distinctive emblem — international law, particularly as it was related to the wounded and sick on the battlefield, was also naturally an important topic (as can be seen already in the first edition). This was in line with a broader trend of growing interest in academic literature related to international law. As legal scholar Ignacio de la Rasilla del Moral observes, around the same time, the first international law journals began to emerge.

From the time of its foundation, political factors shaped the journal. The ICRC was responsible for editing and producing it, and quickly the organization’s own interests began to be reflected in its pages. Daniel Palmieri examines the politics behind the scenes that have shaped the Review from the 1800s to today.

The journal has had 16 Editors-in-Chief since it was founded. Three of them reflect on their experience as Editor-in Chief in this edition. Jacques Meurant, Editor-in-Chief of the Review from 1986 to 1995, describes the journal as “the primary messenger for what had become a humanitarian call to arms.” In 1988, the governing body of the ICRC, the Assembly, confirmed that the Review was the official mouthpiece of the ICRC, “at the service of the entire Movement, accurately reflecting the Movement’s policies and reporting on its activities to the outside world.” Hans-Peter Gasser, Editor-in-Chief of the Review from 1996 to 2001, states that although the journal “had adapted over the years to the demands of the times, at its core it remained true to its founding spirit.” Toni Pfanner, Editor-in-Chief of the Review from 2002 to 2010, reflects that “In its 150 years of history, the Review has seen major developments and has adapted constantly to new environments. In the face of a changing world, it has remained committed to forwarding the ideals of the Red Cross in the midst of many tragedies.”

Today, the International Review of the Red Cross is a peer-reviewed, academic journal produced by the International Committee of the Red Cross and Cambridge University Press. It is guided by a multidisciplinary Editorial Board from around the globe made up of non-ICRC experts. It no longer serves as the “ICRC mouthpiece”, presenting only ICRC positions, but instead acts as a platform for discussion and debate and publishes three thematic editions each year on topics related to international humanitarian law, policy and action.

The pages of the Review reveal trends in the development of international humanitarian law, the ICRC, the Movement and humanitarian action more broadly. The continuation of trends that authors in the special anniversary edition trace in the history of the journal can still be seen in the current content of the journal. As explored in the anniversary edition, this is complemented by the ICRC Library’s Heritage Collection, which collected publications demonstrating evolutions in these trends.

The evolution of the Review reflects the evolution of the ICRC, and of humanitarian action as a whole. David Forsythe reflects on what light the Review can shed on the motivations and attitudes within ICRC in its early days that may have shaped its work. Valérie McKnight Hashemi’s article on the revised rules of access to the ICRC archives, also in this edition, is an example of how this trend continues today.

The seven Fundamental Principles of the Movement are: humanity, impartiality, neutrality, independence, voluntary service, unity and universality. Annette Becker examines the duality of the fundamental principles of neutrality and impartiality, against the national and sometimes nationalistic commitments of National Societies at the time of the First World War. In the recent edition on Principles guiding humanitarian action, the journal invited authors to reflect on how the Fundamental Principles of the Movement work in practice today, and what policies humanitarian actors adopt to guarantee they uphold their values.

Trends in how international humanitarian law has developed over time can also be traced through the Review. Ben Holmes uses past issues of the Review to examine how the ICRC advocated for civilian protection in the inter-war period. The process of negotiating for greater legal protections for civilians during armed conflict wouldn’t come to fruition until the Fourth Geneva Convention of 1949, but the groundwork was being laid already after the First World War. Considerations of how to better protect civilians under IHL continue in the journal today. Recently this can be seen in the article by Isabel Robinson and Ellen Nohle, which discusses how the reverberating effects of attack in urban areas should be taken into account by commanders. We can read how one of these commanders implements legal protections for civilians on the urban battlefield in the article by Lt Col Natalie Durhin.

These are obviously only a few of the many topics that could be examined through the journal’s vast history. For those interested in looking at all the issues of the Review since 1869 they are now available for free online. Topics that can be explored include IHL, humanitarian innovation, the evolution of the ICRC and the International Red Cross and Red Crescent Movement. Answers on how humanitarian vernacular has evolved over time, to an examination of some of the contemporary challenges to humanitarian law, policy and action, and the ways in which similar crises have been addressed in the past can all be found in the newly available archives of the Review.

Reflection doesn’t end after publication. Discussions continue in the Humanitarian Law & Policy blog, in public events and through engaging on social media. These academic conversations continue to inform humanitarian action in various ways. One concrete example is the IHL in action research, which aims to change the narrative that IHL does not work by providing positive examples of respect for the law on the battlefield.

Ten years, 20 years, 50 years, 100 years and 125 years: the Review has already published a number of anniversary issues and articles. At 150 years , we invite you to read the full edition commemorating the anniversary of the journal, “150 years of humanitarian reflection”, here. Also in honour of the 150th anniversary of the journal, an exhibition is taking place in the Humanitarium in Geneva titled “Pages: 150 years of the International Review of the Red Cross.” It is open to the public and will run until spring 2020.

Also in this edition are several selected articles related not to the journal itself, but to various issues of humanitarian law, policy and action. Read the full edition here.