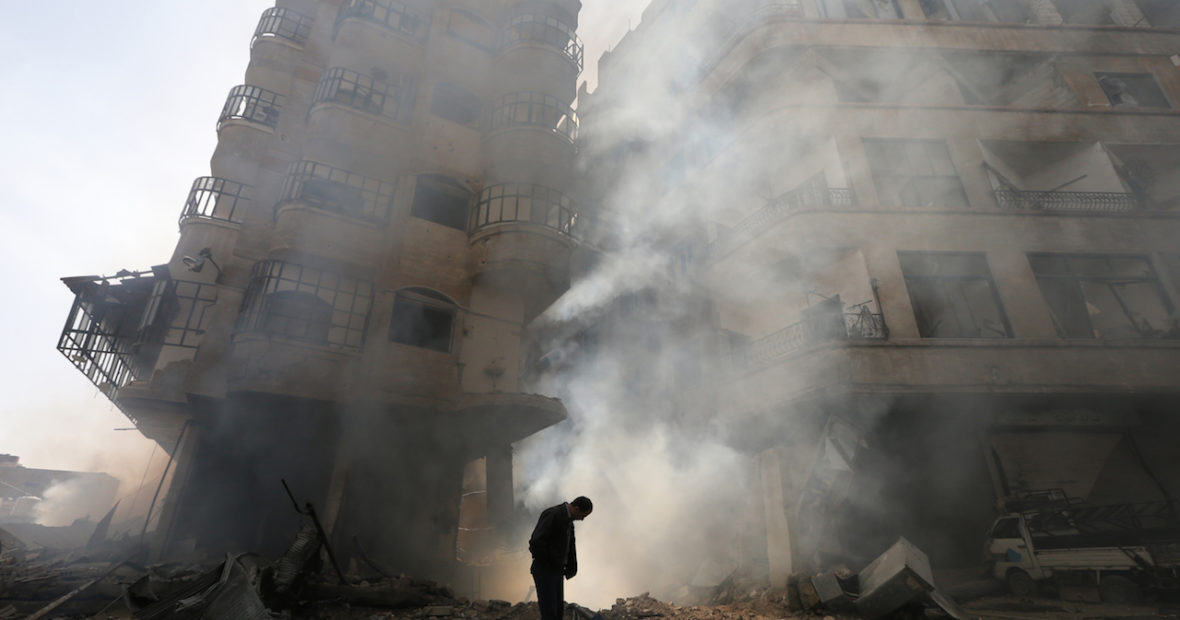 In 2011, protests in Syria descended into violence and chaos. Eight years later, this once prosperous country has been torn apart by conflict as, in the words of Vincent Bernard in his editorial, ‘humanity has been undergoing a trial of fire and blood’ in this ongoing war. Hundreds of thousands have been killed. Millions have been displaced. Homes, schools, hospitals, essential services and infrastructure have been damaged or destroyed. The Syrian war exemplifies some of the most worrying features of contemporary armed conflicts, such as indiscriminate attacks, the use of siege warfare, the fragmentation of non-State armed groups (NSAGs), the intervention of multiple external actors, attacks on cultural property and on medical personnel and health care facilities, etc.

A look back into the Review’s archives reveals that Syria was once a place of refuge for those fleeing conflicts elsewhere in the region. Today, although casualty estimates are so heavily disputed that the UN has stopped reporting the number of wounded or killed, it is clear that the losses are catastrophic. Faced with such devastating loss the human brain fails to comprehend the scale of the suffering. A collective loss of compassion in the face of the mass scale of destruction is in itself a further form of dehumanization. It’s even possible that overwhelming media coverage could exacerbate compassion fatigue.

Evoking the stories of individuals may restore some perspective. In its past edition on War in cities, the Review published testimonies of residents of Aleppo, who shared their experiences. Among them was the story of Yassar, a retired civil servant and father of five children. Speaking of the 2016 siege of eastern Aleppo during Ramadan, Yassar told the ICRC, ‘We did not have access to the basic necessities of life, the situation there was in a state of paralysis… I would not have wanted any human being to go through the kinds of hardships that we did.’

From the scale of the physical destruction caused by the war, ‘we can imagine (or maybe not) the magnitude of the psychological damage that those living through the crisis are experiencing’, says Mazen Hedar, President of the Syrian Association of Psychiatry. In a country where mental health was still considered an emerging field even before the war, Syrians are working to address and manage these mental health and psychological effects. One small silver lining is the apparent progress in mental health care although many barriers remain.

Although aid workers are protected under international humanitarian law (IHL), among the many and varied tragedies that have unfolded in Syria over the past years is the loss of 65 Syrian Arab Red Crescent (SARC) volunteers, killed during the conflict. Despite this, the commitment of SARC volunteers to communities in need has never diminished. The photo gallery in this edition shows some of the activities of the SARC and the ICRC, acting in partnership to address the needs of millions of people all over Syria. It also shares the stories of some of those working to provide relief. One volunteer, Emad, expresses his motivation: ‘I am proud to be a member of the Red Crescent team as they have a humanitarian impact in the harsh circumstances that our country has faced. We have never fallen short of our duties and we will stay equally dedicated.’

Not only are humanitarian workers under attack, but other basic rules of IHL have been disregarded by the parties to the conflict. In this edition, the Review interviews Peter Maurer. He has observed on his missions to Syria that, ‘in an illustration of the degree of disrespect for IHL throughout the region, I saw how health clinics have had to be moved underground for protection’.

Among the IHL violations committed in Syria, one of the most widely-condemned has been the use of chemical weapons. In this edition, Yasmin Naqvi surveys the international community’s responses to chemical weapons crimes in Syria and argues that an ad hoctribunal could be established to address these crimes, which could ultimately act as a catalyst for peace negotiations.

Notwithstanding the prominence of violations of even the most basic norms of IHL in Syria, as has previously been observed on this blog, the perception that IHL is never respected and is therefore useless is not only wrong but dangerous. When asked about the role of IHL in this context following the battle of Eastern Ghouta, ICRC delegate Pawel Krzysiek responded with another question, asking, ‘What would happen if we did not have this basic framework of humanity in wartime? What would happen if we wouldn’t set out limits on how war should be conducted?’ He concluded that there must be ethical, moral and legal frameworks to protect people during war, because without them we risk ending up in an even worse situation.

The ICRC has been looking to ways of influencing behavior and, ultimately, creating greater respect for IHL norms, as exemplified by the recent Roots of Restraint study. In this edition Ahmed Al-Dawoody gives an overview of the Islamic law principles regulating the use of armed force in war, looks at the degree of compatibility between Islamic law principles governing armed conflict and IHL norms, giving recommendations for how to encourage respect for IHL in Muslim countries.

As Peter Maurer observes, ‘the law is an inherently practical tool. It can shape behavior and influence those bound by it to exercise restraint. It offers guidance on dilemmas of humanity and military necessity, allowing armies to exercise common decency, to keep their honour clean.’

Early on in the crisis, the scale of the suffering in Syria and the inability of any organization to adequately respond in the whole of the country’s territory sparked debate among humanitarians about whether aid can be delivered across international borders without the consent of the territorial State concerned under international law. As Françoise Bouchet-Saulnier pointed out in a past edition that ‘unsurprisingly, questions of consent and State sovereignty constitute the main stumbling block in connecting humanitarian relief activities with broader actions relating to managing conflicts and international security.’

In a previous edition, Emanuela-Chiara Gillard discussed the relevant IHL rules governing cross-border humanitarian operations, mainly the need for consent from the State in whose territory operations would be implemented.

The ICRC does not carry out cross-border relief operations without the consent of the Syrian government. It determined that to do so would jeopardize access to larger portions of the population. Instead, throughout the crisis it has conducted its operations across front lines. In the Review’s edition on ‘Principles guiding humanitarian action’, Jérémie Labbé and Pascal Daudin examine how the ICRC’s decisions on whether to conduct cross-border operations are based on the principle of impartiality. Former ICRC Director of Operations Pierre Krähenbühl summarized the ICRC position on cross-border operations in Syria as follows: ‘The ICRC…would only carry out such action with the agreement of all concerned—the Syrian government, the opposition and the governments of the neighbouring countries concerned… this is our way of providing humanitarian aid, building acceptance and trying to reach the regions most affected.’

In contrast, MSF has conducted cross-border relief operations in Syria. As Rony Brauman wrote in an earlier edition, ‘For MSF, as soon as it becomes thinkable, and hence possible, to set up medical services in an area controlled by an opposition force, it is necessary to do so’ with or without the consent of the territorial State.

Peter Maurer re-visits the cross-border/cross-line debate in his interview in this issue of the Review, noting that still after fifteen years or so of debate on concepts such as responsibility to protect (R2P) or humanitarian intervention, the consent of the territorial State is still a prerequisite for humanitarian access.

Cultural property and the built environment

In light of the immense human cost of the conflict it may seem to some less important to consider the damage done to cultural property, but ‘to regret the damage incurred to Syria’s archaeological and historical sites is not to suggest that the cultural dimension rivals the human scale of the tragedy’, observes Ross Burns. He calls on readers to resist the temptation to be satisfied with virtual reality or other symbolic representations of Syria’s historic monuments, reminding us that ‘it was the whole context—the countryside, the people, their openness and generosity, the food and the experience of seeing a site like Palmyra come to life as shadows crept across its tapestry of centuries—that made Syria memorable.’ He encourages the re-building of Syria’s monuments, even it may take decades.

Polina Levina Mahnad looks at the legal obligation of third States to respect and ensure respect for IHL under Common Article 1 as it relates to protecting cultural property. She looks at the innovative measures put in place to ensure the protection of cultural property. One could posit that these measures could serve as inspiration in the future to encourage compliance with other IHL norms.

In her opinion note, architect Marwa Al-Sabouni argues that reversing the process that led to the loss of the sense of ‘home’ in Syria and the unraveling of the urban fabric is the key to recovery. She concludes that if reconstruction occurs in a way that celebrates local traditions, uses local materials and takes into account those who will live within Syria’s cities, ‘our country might have a chance. A chance at restoring its worn-out urban fabric and reclaiming its lost identity. A chance to recreate the roots for people and their place where the love for one’s neighbor, labor and land was part of one whole called “home.”’

Similarly, according to Yassar Abdin, the capital city of Damascus and its surrounding area can ultimately become more secure by becoming more united. He calls for local authorities to play an active role in planning and development to promote cultural openness among the different components of Damascus society.

Hope for a brighter and more promising future

Also in this edition, Gillard looks at the international legal regime governing ‘safe areas’, (sometimes called ‘safe havens’, ‘buffer zones’ or ‘de-escalation zones’ in Syria). Through the lens of the UNMISS Protection of Civilians sites in South Sudan, she argues that it is worthwhile to encourage belligerents to establish and recognize safe zones, saying that ‘quiet diplomacy is more likely to succeed than calls in the political limelight of the Security Council, and as always, humanitarian negotiations should be kept totally separate from discussions of a political nature.’

This and other humanitarian initiatives have been tried in Syria, with the aim of protecting civilians and eventually providing the means to end the conflict. But it is a truism that ‘there are no humanitarian solutions to humanitarian problems.’ The international community and ultimately Syrians need to find durable political solutions in order to end the conflict and allow the rebuilding and healing to truly begin. Even given all they have suffered, many in Syria still have hope. In the words of Yassar, ‘Despite having been through extremely difficult circumstances, we always pin our hopes on a brighter and more promising future’.

This edition provides excellent reading material for humanitarians, international lawyers, historians, academics and others concerned with the effects of conflict in Syria. The next edition of the Review, is a special edition celebrating 150 years of the journal’s publication, and is scheduled to be published this summer.